Some Van Repairs and Picking Blueberries With the Peeps

Today I needed to do a little van prep as I hope to be going on a trip soon.

I finally found a steering wheel cover that would almost fix the van’s truck type steering wheel. It said it would fit a sixteen and a half inch diameter wheel. The van’s wheel was just a bit larger than that.

Get the old one off

The first thing I had to do was get the last one I did a number of years back off, meaning peel all the old tape off.  I broke it trying to get it on the wheel, so just taped the part that was on the bottom that broke and it worked pretty good. But the plastic on this old one is getting rather sharp on the edges so I’ve been looking for a replacement for quite awhile now.

Here’s the old one after I removed all the tape. You can see the tear where it broke on me as I was putting it on. The new cover is on the right and looks small. 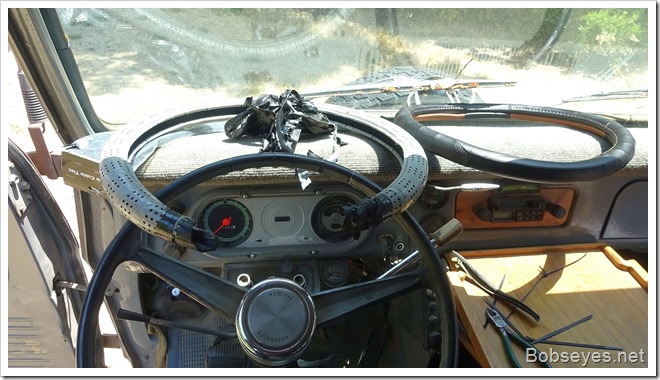 Heating up the new cover

From past experience in breaking the old one, I left the new cover in the van and closed the windows so it would heat up and warm up the cover so it will hopefully stretch better without breaking.

I left that to let the sun do it’s job and went on to the next task.

A piece of the van’s fuel line is old and cracking and I wanted to replace it. You can see it with the gob of silicone that didn’t set that I put on to repair it. It’s hooked to the fuel filter and I think the gas is lower in the tank than the filter outlet as the tank is three quarters full so if I’m careful the gas should stay in the tank. 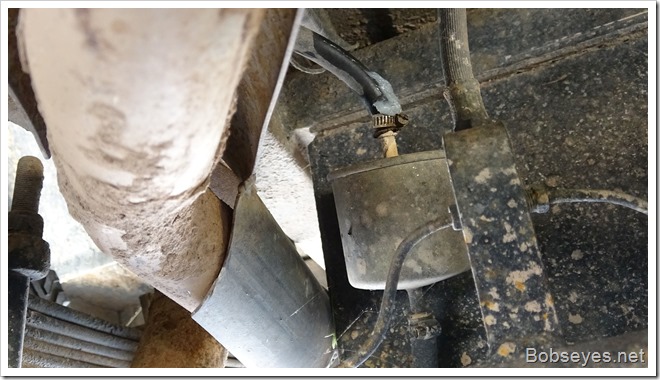 The hose is a short one that goes to the electric fuel pump. I only tipped the filter a couple of times and spilled a little gas. All fixed. 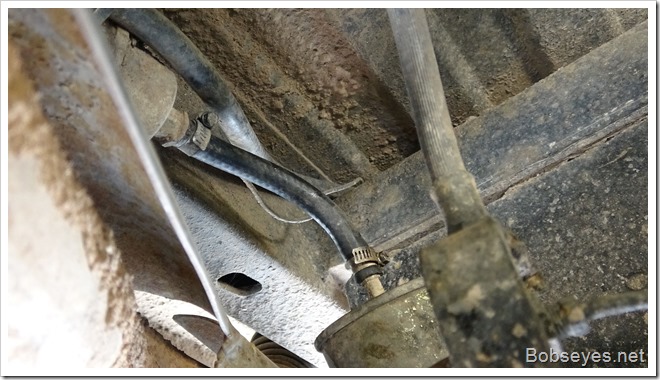 I needed to wait for the van to heat up and the steering wheel cover to warm up, so I was sitting in the chicken pen watching the peeps and I noticed some of them had gone up the ladder in run 1 where I had a ladder and were sitting on the roost.  I didn’t make a ladder in this run but instead just put some logs up to let them go up those. But a ladder is an easy thing to make when you already have the materials so I spent about an hour making this one in run 2. So far they haven’t gone up it. 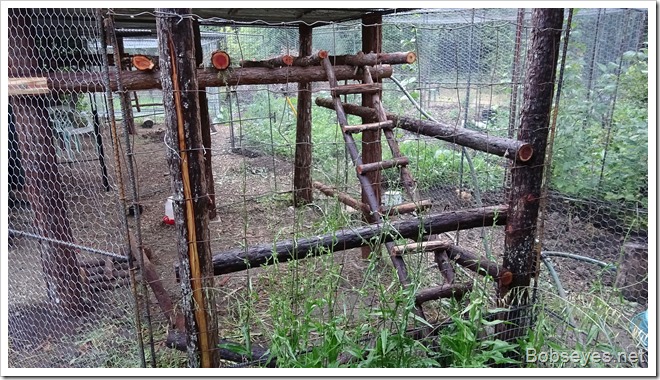 By then the steering wheel cover was warmed up and so was the van. I went in and closed the doors to keep it warm.

I started at the bottom which is at the top in this photo and started stretching it around and it would barely go. It took quite awhile to pull and stretch it and work it onto the wheel. I didn’t think I was going to make it, but I kept at it and it was finally on and I was really sweating in the hot van by then. If it broke which I expected it to do, I’d just tape it on again as it worked just fine that way.

The new steering wheel cover in place and not broken this time. 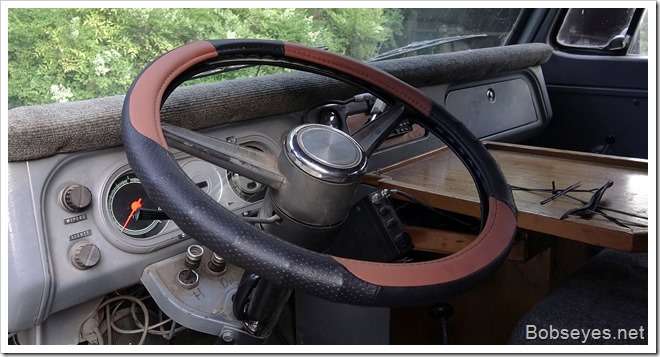 The hard plastic steering wheel on the van is real hard on one’s hands without the cover. There’s no power steering either.

I puttered around the yard doing this and that and mostly trying to tidy up a bit where I had been working as when I work, I concentrate on the work and tend to make a pretty good mess with tools laying all over the place.

Later in the day when the sun was getting low in the sky, I decided I’d better pick some blueberries instead of just eating them as there were now more than I could consume.

Blue blueberries in the patch means they are ripe. 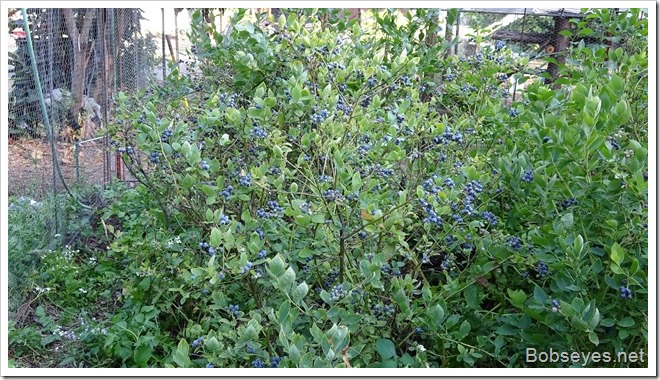 I was picking away and heard the chicks at the gate. I’d let them in here once before and they seemed to remember and wanted in so I opened the gate and let them in. They seem to love it in here. 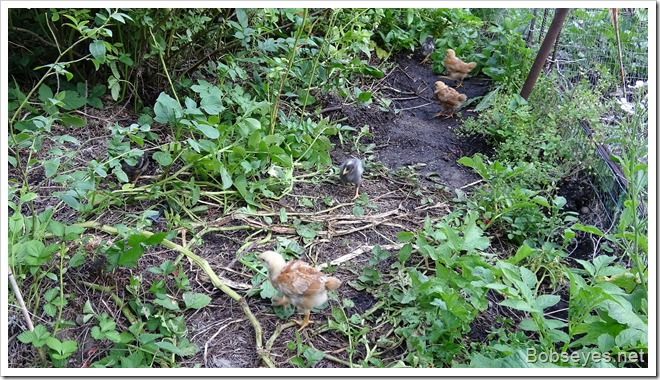 They were running all over the place under me as I picked and I had to move my feet slowly as I moved and we got along fine.

I’m not sure if they eat blueberries yet or not, but there are a lot of other things in there to eat. I do drop a lot of berries as I pick so there are plenty of them on the ground.

I noticed this chick is starting to get it’s colors as well as some of the other chicks. 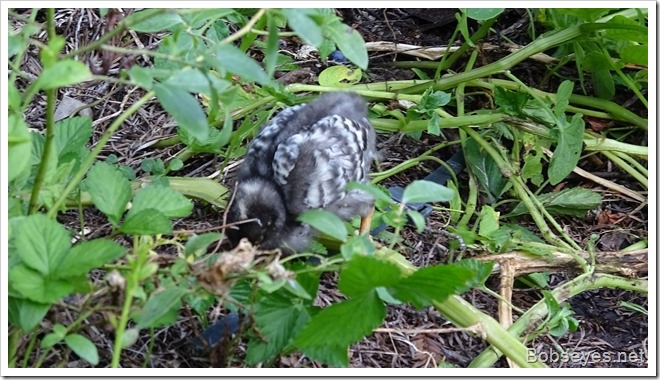 Blueberries for he freezer

These picked blueberries will go into the freezer and I will forget about them until winter time. There’s still plenty more berries on the bushes. 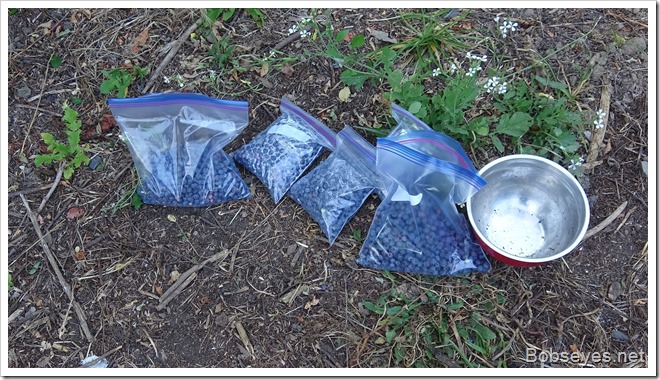 That was enough to keep me busy today for another nice one.