Some Van Repairs and a Nice Visit With Irve Hafer

Yesterday evening while I was down at my spot in Troy an older guy was hanging around in his truck so after awhile I said hi to him and asked where he lived which surprised me as I knew the place. He said he lived way out Eden Bench in a big wooden house.

I said I know you. It turned out to be Irve Hafer a guy I met a couple times long ago and we’d both gotten a bit older. He didn’t remember me but I told him I stayed with the Zellers a long time ago. He hung around until 7PM shooting the bull for over an hour. I was wondering why he hadn’t left for home. It turned out it was ladies night at the store here so he was waiting for his wife. We had a nice chat about his whole logging career and how he got his worn out back all fixed up so he was able to move again. He’s 79.

Going  for a wild life ride

At 7 I told him I was going for a wildlife ride up to Eden bench and he’d likely go by me on his way home.

I was parked here up on Eden Bench when Irve drove up with his wife and stopped to introduce me to her. Nice lady. He also told he to come on into his house if I made it out that far which I didn’t expect to do that night, but it was nice of him to offer. 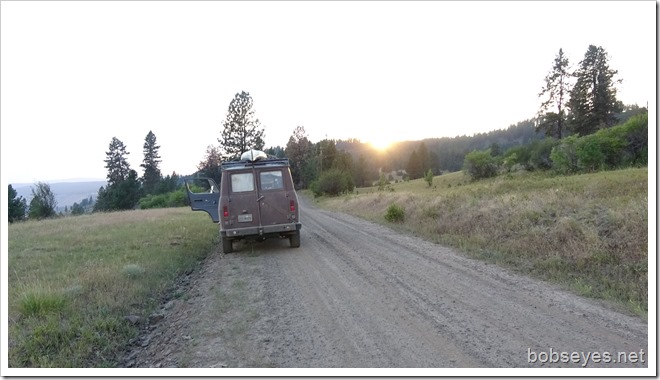 It was too warm and no wild life was out yet so I made my way back down to Grizz Flat to camp for the night with plans to pull out tomorrow, but things change.

When I pulled into camp I noted that my auxiliary electric radiator fan wasn’t working so I thought I better stay one more day and get that working as it’s been hot around here. the heat is supposed to break by tomorrow with some rain.

So this morning I got out all the tools and got started trying to find out why the fan didn’t come on. Here’s the relay and wires to the electric but what’s wrong. 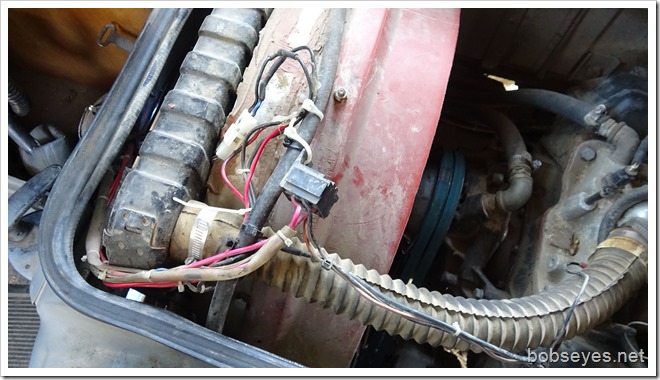 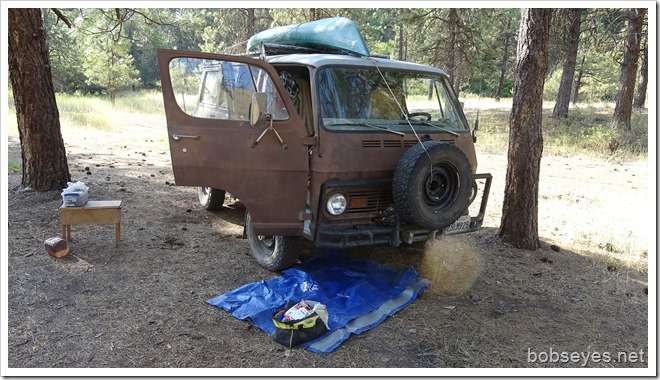 I checked and measured things until I found there was no juice getting to the switch. 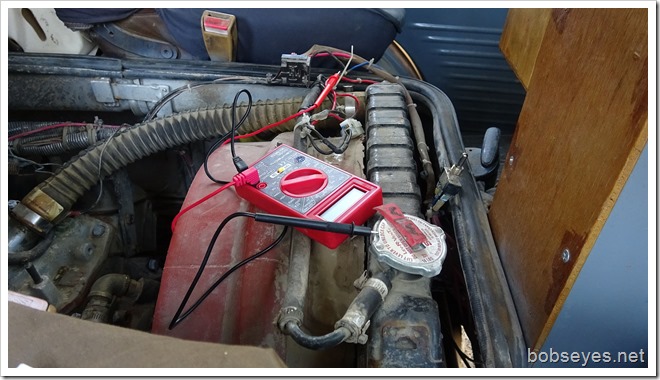 I found the fuse holder had melted down and had a new fuse holder so replaced that and then I found the switch was also bad. I didn’t have the right switch but I had this one and was able to make it work with the little double spade things. 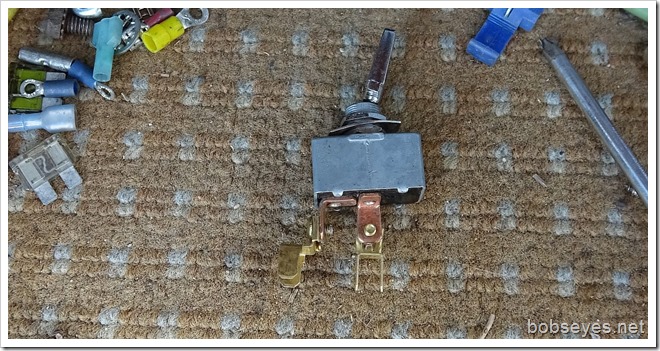 Of course it was hard to get to that switch to replace all the wires to it but I kept at it and got it done. I tested things out and it was good to go so I put all the stuff away I’d gotten out to repair things.

A visit to the Hafer place

Having gotten that done I could now go up and accept Irve’s invitation to check out his big wooden house. I thought I better wait until after lunch before driving on up there so I took it easy for a bit and left around noon as it was a bit of a drive on up to his place. He lives off grid way out there.

He’s not far from here only a few more miles. 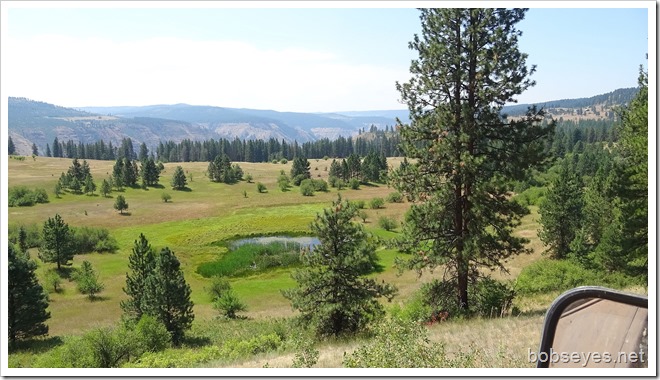 I drove into his place and parked here but it didn’t appear that anyone was home. Darn. 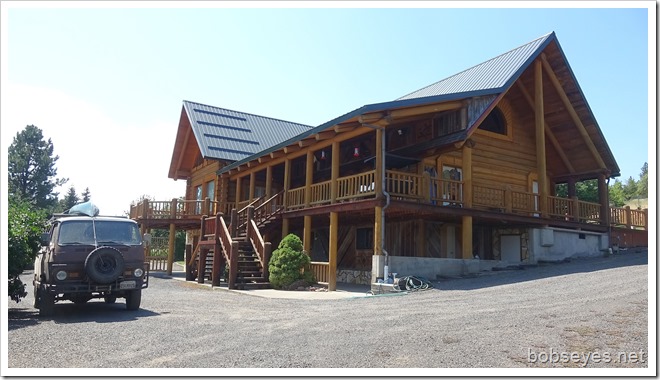 I walked up the stairs and knocked at the door but I raised no one but here’s the view from the porch. 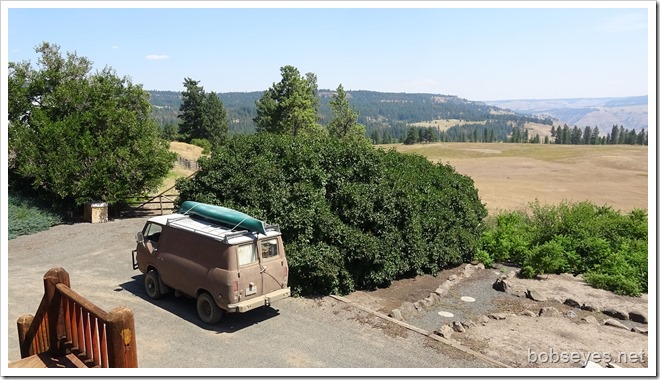 While driving in I saw some tractor tracks on the main road so I thought they might lead to Irve so I followed the tracks down this little side road where I found Irve cutting up some firewood. He had a big smile on his face when he saw me and stopped what he was doing.

It was after lunch and he said it was time to quit for the day and said follow me home so I did. He’s a trusting sol as he left his nice chain saw there and drove off. And no he didn’t forget it. 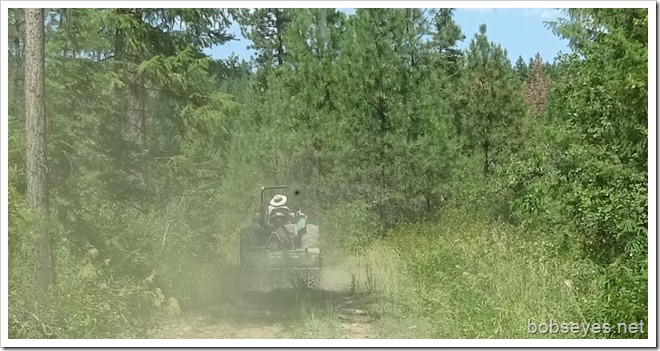 He shows me his house, WOW

Back at the house we went in through a lower door and this was the first room he showed me. He said all the furniture is made by hand. The wood on every thing is all matched too. 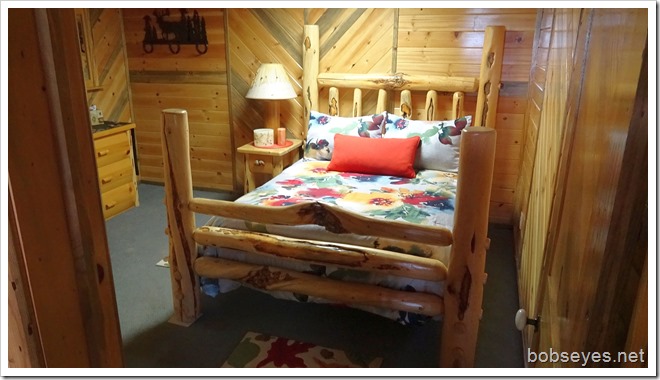 Over the living room he has this big sculpture thing with a number of cats on it. 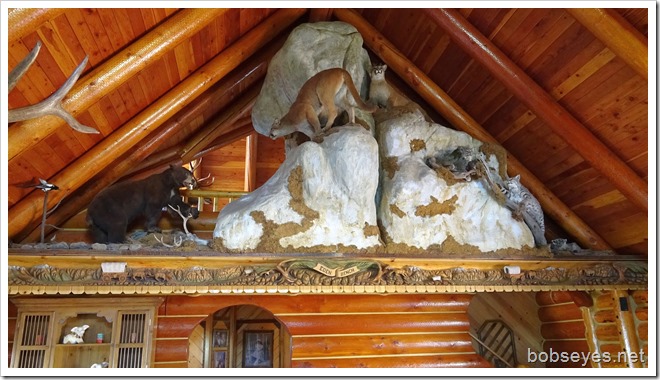 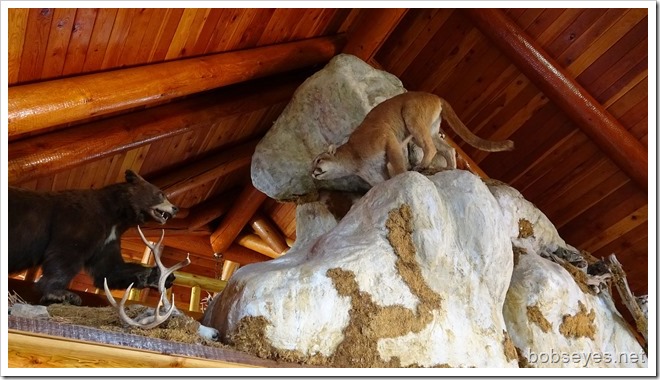 He turned on some of the lights so I could see the reflections off the wood. I think it’s the nicest wooden house I’ve ever seen. Well done. 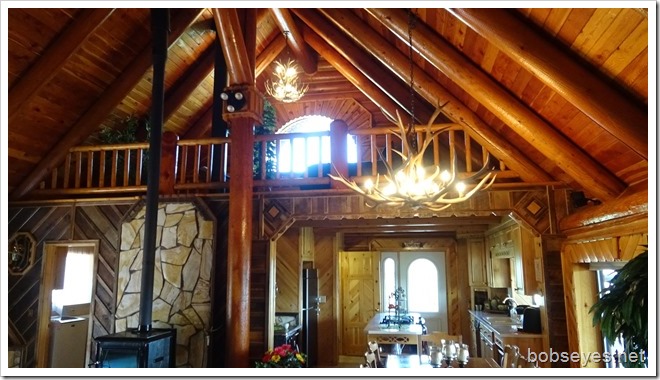 We sure chatted away

We chatted about a lot of old times and how he met his current wife, a long story, and his work career some more, and before I knew it it was 3 already so I said I needed to leave as I wanted to visit Sue for a bit again. Unfortunately his wife was off at a neighbors so I didn’t get to visit with her.

We stopped and checked out his garden on the way to my van. Here’s his solar panels in his garden. Here to keep the elk away from them. 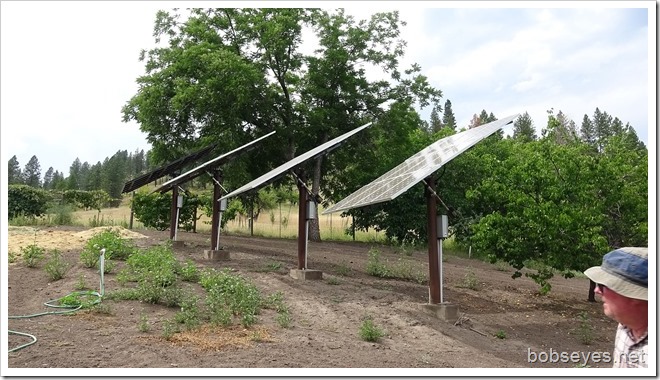 Irve in the garden

Irve decided I should have some fresh cucumbers so he picked me three in this patch. 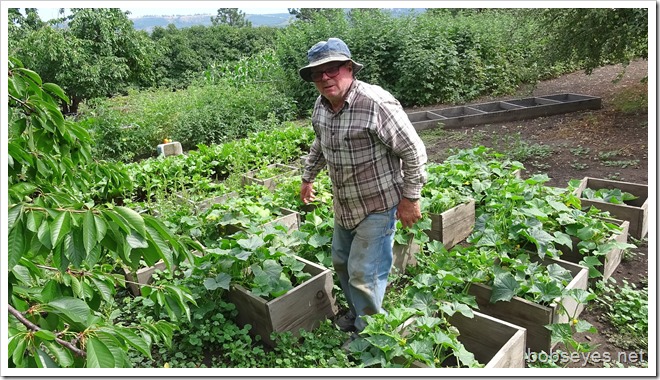 I decided Irve was quite a man as I drove back down the road towards Sue’s place. Those deer are still hanging around there getting into her chicken food. 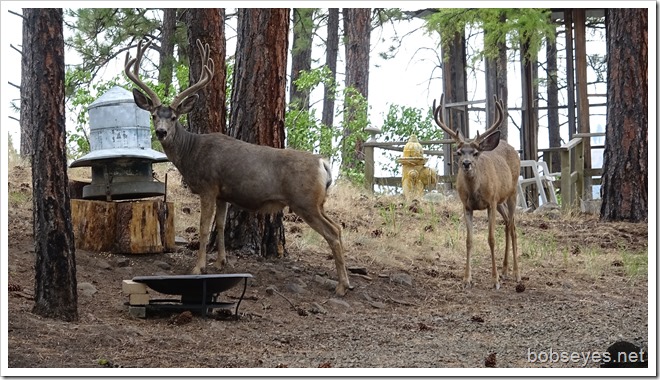 I grabbed a couple water containers as this is a good place to get good water and went on in the house. I got the water but Sue was in the bathroom getting ready for bed. That could take a long time for an older lady so I told Connie to say hi for me and drove on down to  my spot in Troy to do some blogging.

A I was sitting here the wind came up very strong and caused the whole town to disappear in a dust cloud and the thunder started. Since I’m in between the mountains I didn’t see any of the lightening. And then the heavy rains started for about ten minutes and it was over, a bit cooler which is nice.

So my plan now is to get this blog posted and then drive a couple hours out of here likely stopping in Lostine where Ray and I stayed coming in as I have a long drive tomorrow to get back to Bruneau Idaho.

That’s it for another great day putzing around Troy area.