Smoking Fish, a Motorcycle Ride and a Chicken In the Pot

The showers stopped today so the smoker fire got lit, but I needed to let the fish dry a bit before I started the smoking process. I’d put a salt and brown sugar rub on the fish a couple days ago so the fish was ready to be smoked.

Getting the fire going for smoke 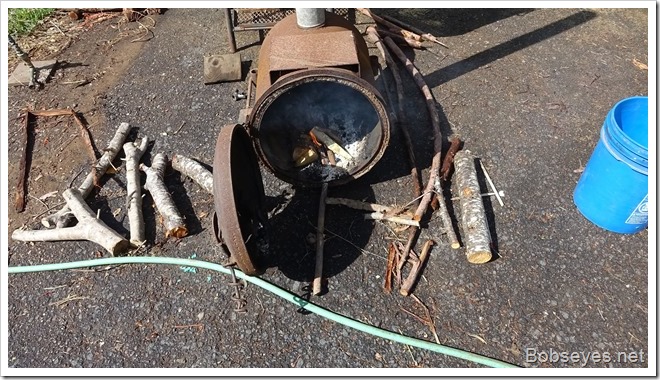 Motorcycle ride up the hill

I left the door open to the smoker so the fish could dry. While I was doing this I heard my brother Barry’s truck across the road so thought he might be going for a motorcycle ride up the  hill so I cranked up my other brother Mike’s motorcycle and rode over to find him, but he wasn’t on his motorcycle but he drove up the hill to split up some firewood so I rode up the hill and found him splitting wood and loading it in his truck.

We shot the bull for a bit then he said he could use some help holding up a wall panel at our rental and should only take a few minutes,……. wrong. He was in the process of replacing an outside wall panel with a new one as the old one had a lot of rot in it.

So I said I’d go for a short ride and meet him down there and help him out.

The panel was a bear to install

He’s a retired surveyor and makes his cuts really accurate but didn’t leave much clearance to make it easy to install so we had a hard time getting the piece in. We’d almost get it lined up and then it would not go or fall out of place. The piece fell out enough times that at least we were getting good at getting the piece started again.

Well after an hour or so we finally got it in place and it pounded some nails into it to hold it and I went on home as I hadn’t checked on my smoker fire for a couple hours.

The fire was almost out but no problem. I put on some plum wood and got the fire going and closed up the smoker and started it smoking. 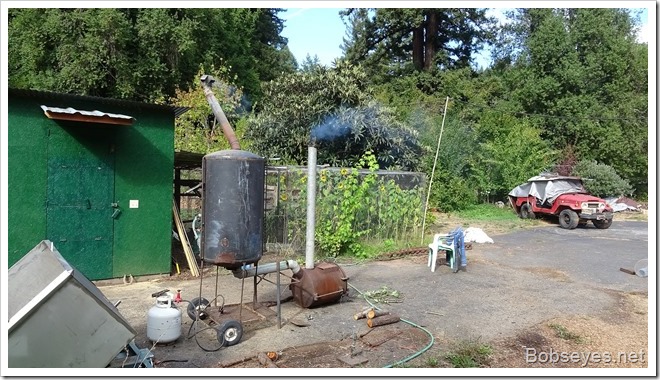 A bit dryer would be good

Last time I smoked for five hours and it was a little moister inside than I like so I thought I’d try getting it a little dryer this time by smoking it a bit longer so I’m giving it seven hours this time which puts things  about done around ten PM so it’s still going and looks good.

Another chicken in the stew pot

Around five PM I selected an unlucky chicken and prepped it for cooking in my pressure cooker.  Prep takes just over fifteen minutes as I’m skinning them instead of plucking all the feathers. I think a pot of chicken noodle soup for this one.

Still smoking away but almost done

I continued to check the smoker and added wood when necessary keeping the temp in the smoker below 150 degrees F. Almost done now.

I puttered around the yard doing small jobs here and there as I needed to keep an eye on the smoker even after it got dark.

That was it for my day for a nice one.

(Visited 137 times, 1 visits today)
This entry was posted in Uncategorized and tagged Chicken in the pot, Smoking fish in the smoker. Bookmark the permalink.

1 Response to Smoking Fish, a Motorcycle Ride and a Chicken In the Pot