Smack In the Middle of Seals Hunting For Steelhead Fish

I thought I’d go on down to Jenner to kayak for the day as it looked like the wind was going to be down.

I drove on down and put my boat in the water and parked the car.

Which way to go up or down river. I wasn’t sure so I paddled across the river to Penny Island and looked down river towards the mouth area.

Looks real good but I was down that way  the other day. And with the holidays more people would be down that way so that made up my mind. 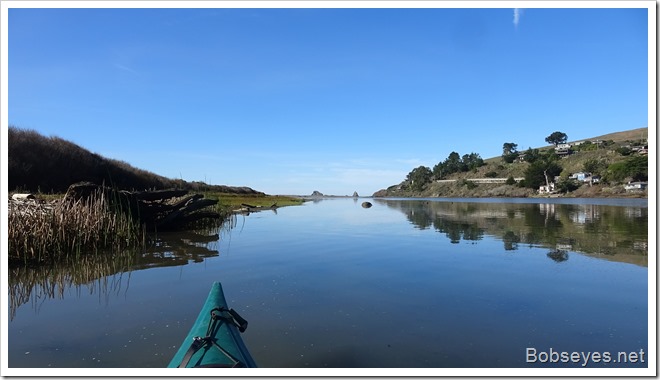 Going up today only about a mile

Up river it was going to be so I turned and started a slow paddle up along the edge of Penny Island where I went by these two deer grazing on the grasses there. 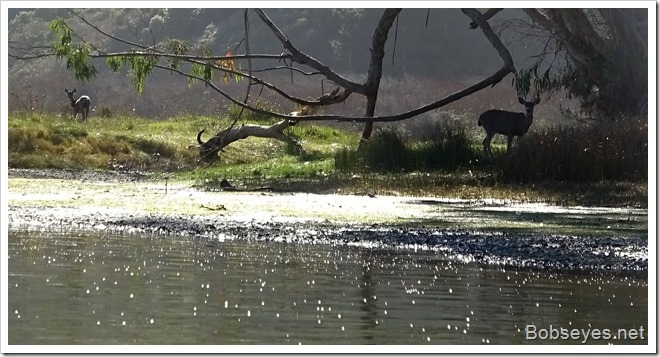 I slowly worked my way up the river taking my time and enjoying the nice day.

I spied this young bald headed eagle across the river just below Paddy’s rock. It noticed me and took off flying on up the river and out of sight. 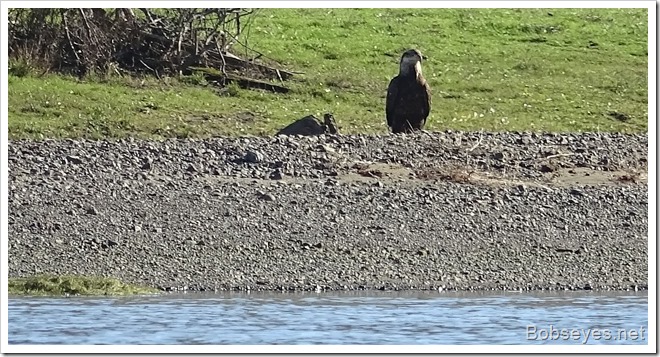 Harbor seals are on the hunt

I was just hanging along the edge of the river when I saw some splashing right by the side of Paddy’s rock from across the river where I was. Looks like the seals are on the hunt today. 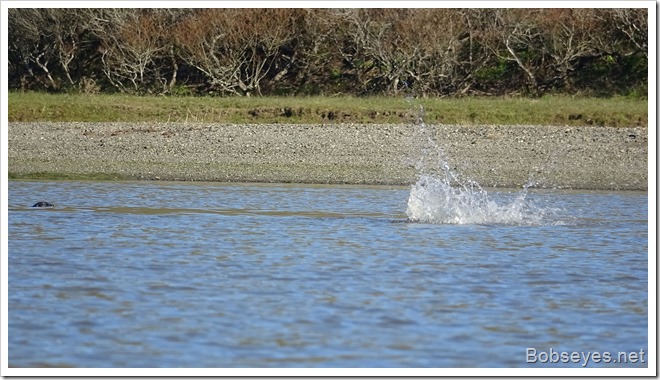 All of a sudden

I continued slowly up along the side of the river and all of a sudden the water around me started to thrash and big waves rose up. Wakes from large critters on the hunt for big fish all around my boat.

I knew what that meant. Either some harbor seals or some sea lions were on the hunt for big fish most likely steelhead as it’s getting that time of year for them to come into the river to spawn. I watched as the waves went around my boat then took off across the river.

I waited for some thing to surface and this is what I saw across the river from me by Paddy’s rock. 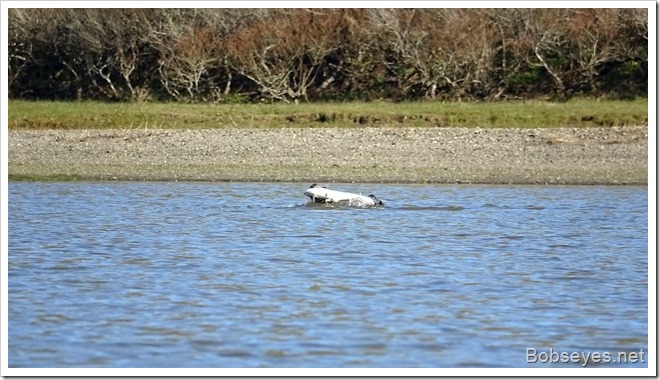 I’ll help you out a little, but it only showed a moment and then was gone. I’ll blow it up a bit but it’s not too clear as it has a coat of water on everything from just surfacing. 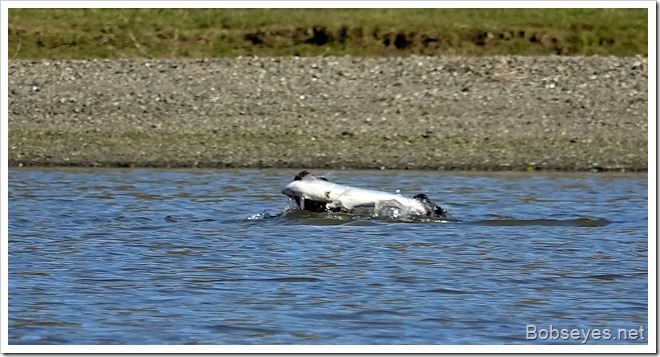 Came back to give me a show

I started to paddle over in that direction but shortly they moved and came back a bit closer.

Here’s some of the pack. I think there where about six in this pack with at least two big fish, likely steelhead. 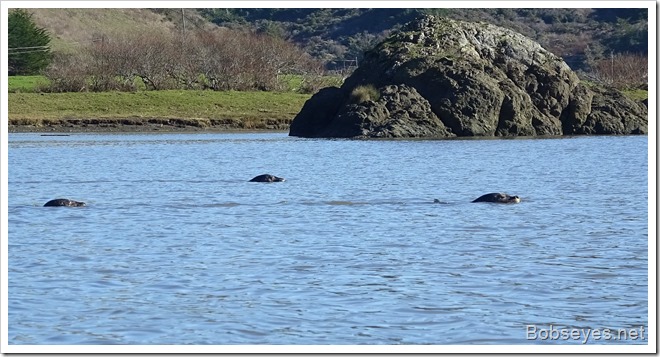 Now getting photos of seals eating big fish isn’t so easy as they mostly eat under water but have to come up for air, but where? I point my camera in the direction I think a seal with a fish might pop up and wait. They pop up quick and are gone again before I can get my camera on them.

So I get a lot of splash action. 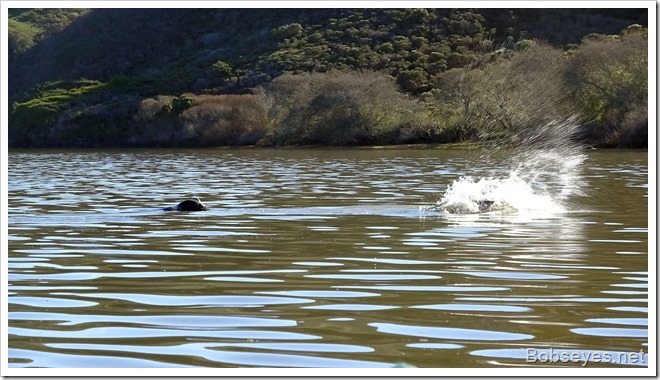 I take a photo just in case as to get this action that happens so fast the camera button has to be pushed just a moment before any action as they are up and then gone. Waiting to push the button once you see some action just doesn’t work most of the time. Most of the time only splashes are seen and not the critter or the fish so you wait.

Only a big splash one right after another, lots of action as I watch. 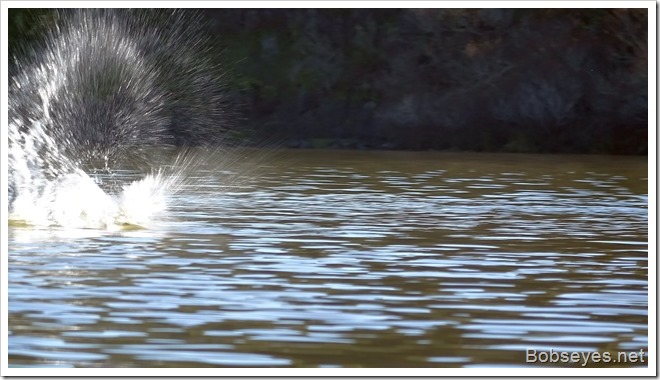 Usually the big splash has something to do with another seal trying to get a bite of the big fish. 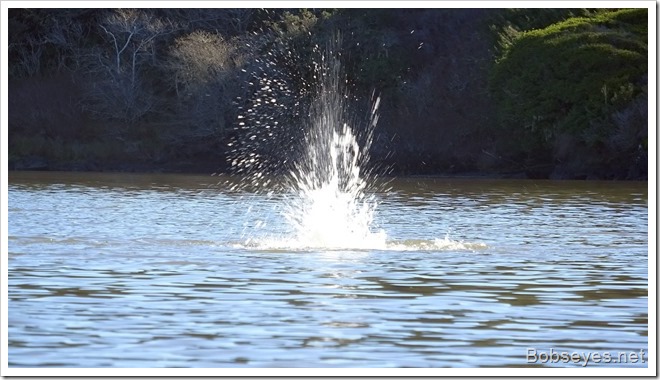 And I get a lot of blurry shots as they move fast and don’t stop much. 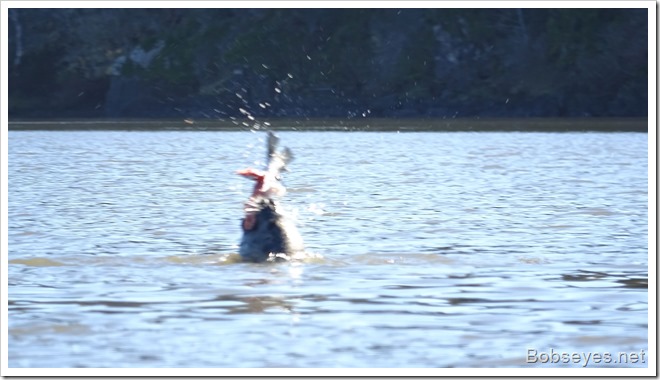 They moved closer to me

Eventually one of the seals moved right in front of me. It appeared it was using me to keep the other seals away a bit so it could eat the fish. The fish are too big for them to swallow whole but they do try. 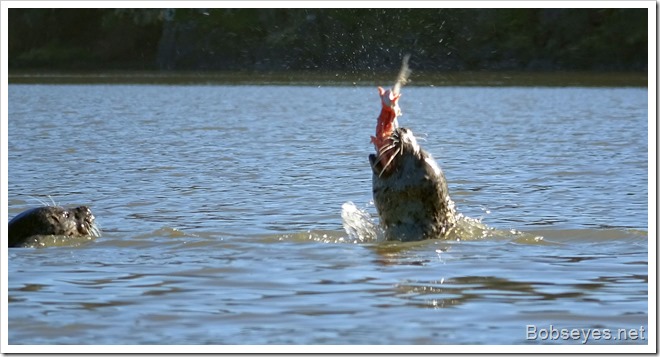 Another splash about twenty feet off my boat. 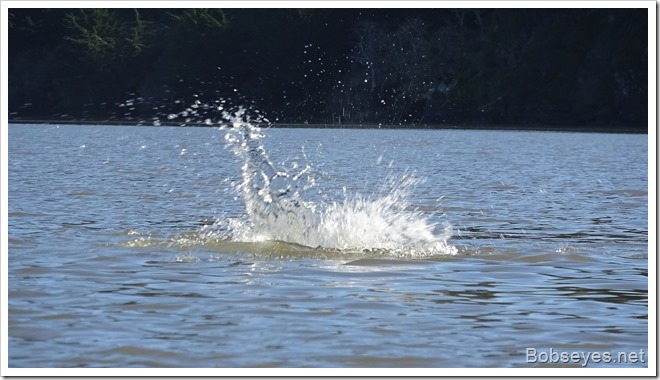 This was the last one I was able to take of the seals and they moved off up the river. 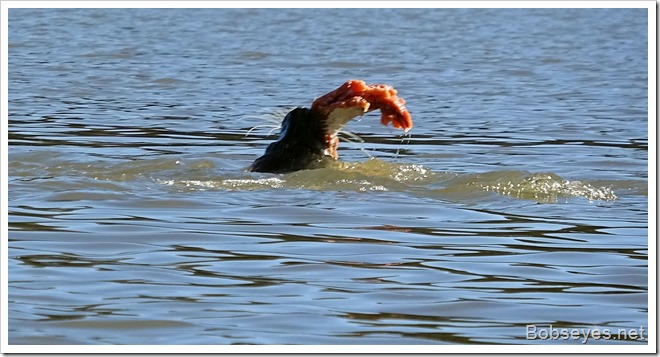 That was exciting while it lasted about a half hour or so.

All this means is the steelhead are coming into the river right now so the fishermen will be happy and all the critters that eat them too.

I worked my way back down the river and was headed on in for the day but was thinking I might paddle down to the mouth area so I started down along the edge of Penny Island going by this great white egret fishing away for some kind of tiny fish as I saw it catch some. 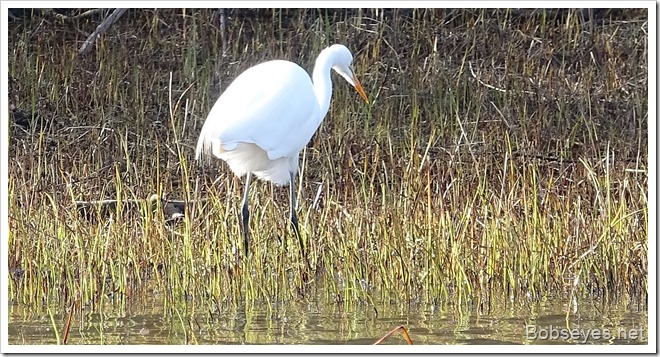 Just past the egret I spied this deer looking at  me. It was eating grass but I made it nervous so it headed on into the brush. 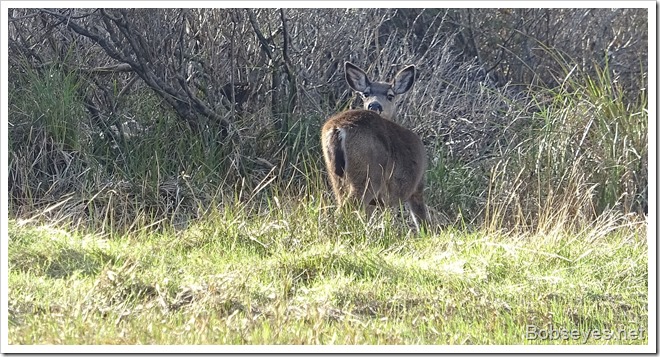 About that time I changed my mind and turned and headed in to the boat ramp at Jenner and got the boat back on the car and went on home for the day.

Once home instead of a nap I had a cup of coffee and then went outside to work on the chicken pen roof a bit. I was able to get one more steel sheet up and am thinking of adding one more. I’m running out of old steel roofing so I can’t do too much more roofing on the chicken stuff.

But I’d like to get enough of it up to prevent most of the mud that forms in the pens when it rains as it gets all over my shoes and is hard to get off and gets tracked into the house so I’m working on it, just one more piece to put up.

Once I had the chickens penned up for the night I went in for the day and that was my day for a good one.