Simple and Easy To Make Chicken Feeder Works the Best

I didn’t have a lot planned for today. I did want to build another chicken feeder and a few other little things and I needed to keep prepping the van for our trip to the desert, but they were all just little things.

When I went out to have a look at the chicks, they were mostly resting. They get out first light and start foraging so by the time I get out there they’ve been at it for a few hours as I don’t get it going at that ungodly hour. :O) That has a lot to do with the fact that I go to bed around 2AM. 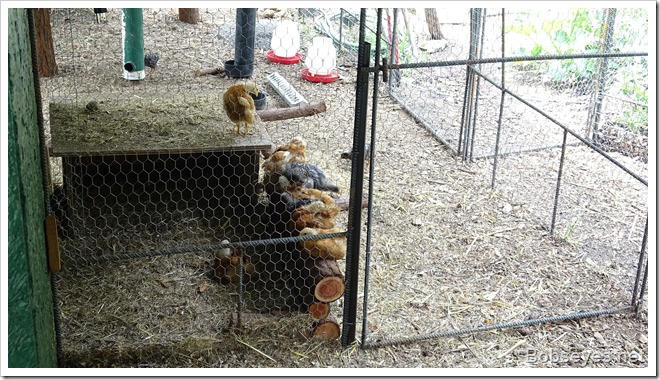 Keeping chicks out of the grower pen

One of the things I needed to do was patch this fence to a growing enclosure as I found two chicks had going through the large square wire. I hadn’t planned for the little peeps, just big ol chickens. So I cut a piece of chicken wire and installed it which should fix the problem. 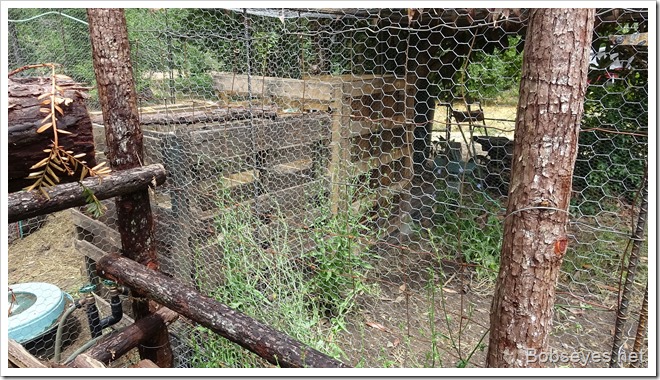 The chicken feeder I made yesterday wasn’t getting much action yet so I thought I’d try another model. This model is super easy to make compared to the other one. All it is a a piece of 4 inch abs as that’s what I had. I needed a little dish larger than the 4 inch pipe and three screws. I also put a coupler on the top end to make it a bit easier to fill. 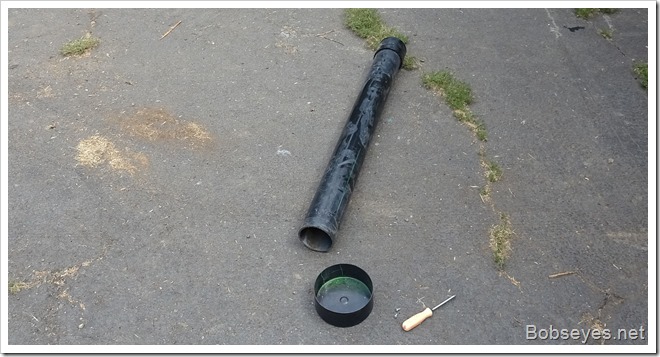 For the dish I used a gallon paint can and cut it about two and a half inches tall with my table saw. I drilled three small holes in it for screws to fasten it to the pipe and that’s it. The pipe is set above the dish about 3 eights of an inch so feed can come down into the dish.

Next I drilled two holes near the top and put some steel wire through them to hang the unit from the pens roof.

This feeder is easy to make and works well too

This is a very simple and easy to make design as you can see. The dish is offset from the pipe to form a little feed area that is too small for them to climb into. 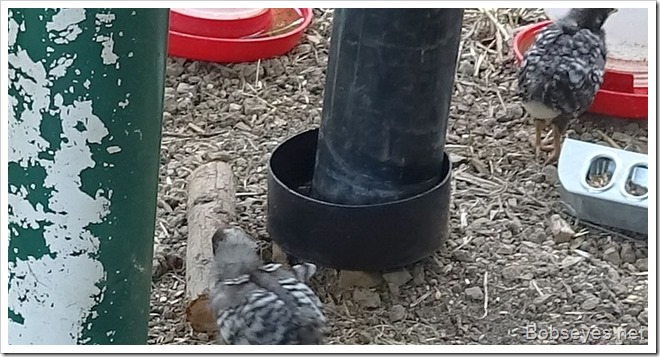 I did discover the white pipe is easier to see the feed level than the black pipe which is quite dark down there and may need a light to check the feed depth. The abs pipe is not necessary, but it’s what I had in stock. White PVC would be better for any of these type pipe designs mostly as the feed level can be seen easily, but otherwise it doesn’t matter what it’s made out of.

I poured some feed into the top and set it up. The chicks didn’t  have any trouble finding this one and started using it right away. The other unit I made yesterday is that green pipe. There is a bird on the backside using it so they are finding out about it. I’m removing the little long feeder with all the holes in it as they’ve outgrown it already. 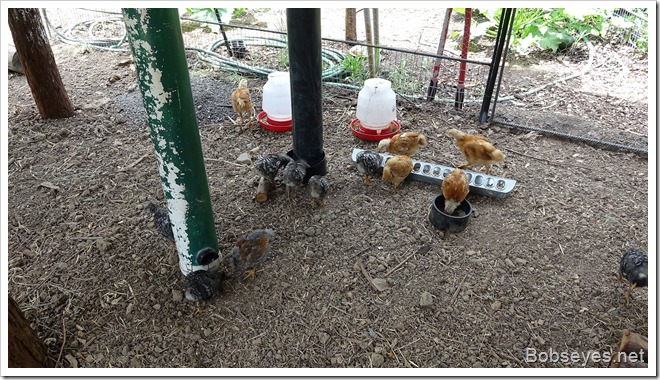 I loaded some stuff in the van and I applied silicone to this piece of weather stripping and glued it in place. It stops water from running down the backside when it rains. That keeps it off me when I go into the doors and also helps keep water from running into the back doors. 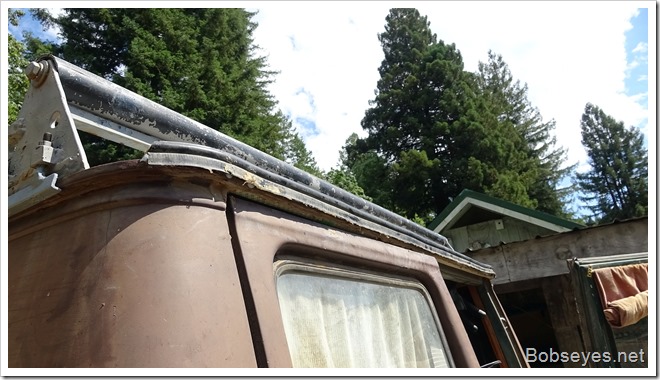 I was talking with Dominique today and she showed me a chicken calendar she has and said this is our Carmelo, a chick she named. This chick was a free one with our order and was listed as a rare exotic breed and a surprise so we weren’t sure what it was. Her calendar one that looked real similar was listed as a Cream Leg Bar, so I looked it up and sure enough I think that is what it is. This is a male I think so unfortunately we are not going to get any sky-blue eggs from it as that’s what they lay. But maybe he’ll make some chickens that do. The breed has a lot of good traits and is used heavily in Europe, but not so much in the US yet. 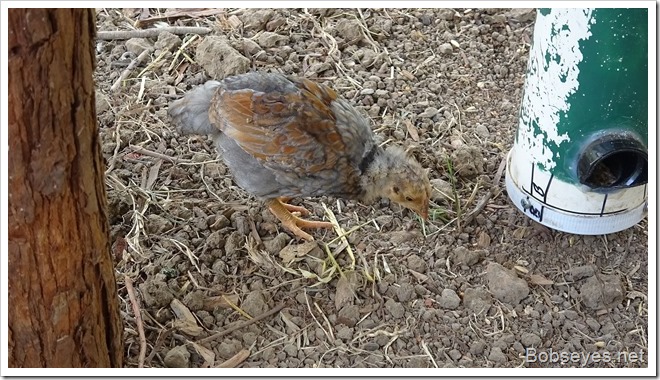 Worms for the peeps

I hadn’t fed my peeps any worms for a few days so I dug some up. This time they wanted them real bad and would jump up about a foot and take them from my hand. 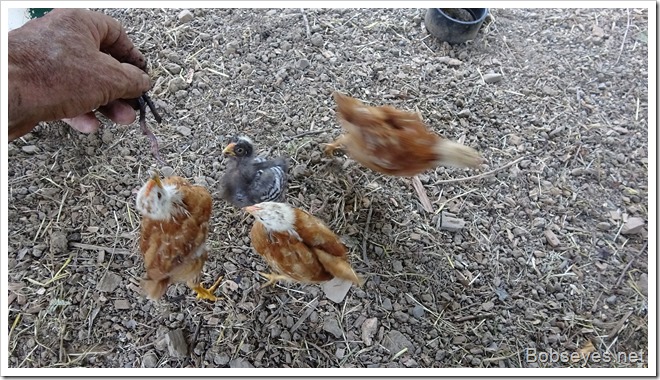 The chickens seem to like the newer feeder the best

A bit after feeding them the worms I watched them eat. The feeder I built today was being used the most. Five or six birds could feed at it at a time. The other feeder wasn’t being used nearly as much. Most of the birds by the older feeder are eating feed off the ground, but at least some birds were using it so it should also work out. 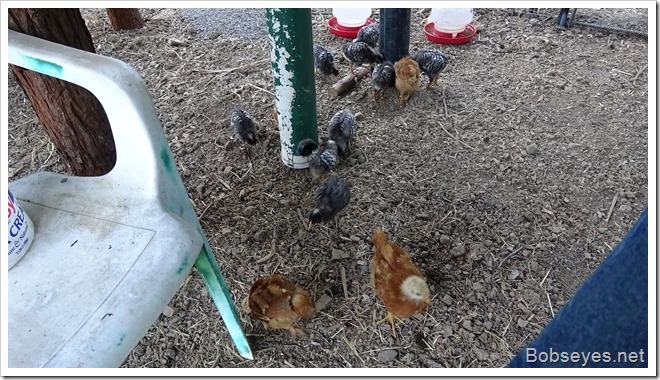 By now it was getting close to dark so I went on in for the day and that was my day.