Drizzling so no yakking

I was thinking of going yakking today and than go over and do some shopping in Santa Rosa late in the day, but when I got it going it was drizzling so I scratched the yak for the day and went shopping instead.

First I drove over to the Chinese grocery store to get some things including two new eating bowls as I dropped and broke one the other day. I also picked up what is called pounded yam flour which seems to make some  good mashed potatoes instantly and some instant noodles. 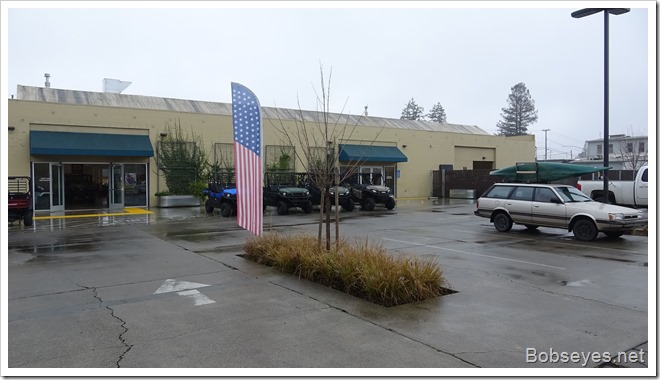 I looked at these Honda’s. This is a crf125f dirt bike. I don’t like that they are not street legal nor the fact that they don’t have headlights. It seems dumb to not have lights for the dark when getting back from a ride late, but I can add a headlight if the cycle has a battery which this one does as it’s electric start. 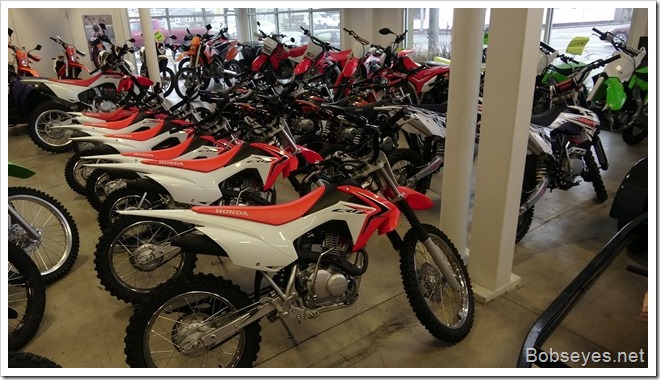 My main problem with these bikes is they cost more than I want to spend on a motorcycle. They have a base price listed and then you still need about a thousand dollars for setup fees and shipping and taxes. I thought maybe the guy would make me a deal, but no.

So maybe the thing to do is buy a used one. I found that dirt bikes for street started with the 250 cc bikes and none where street legal in the smaller sizes so maybe I’m stuck without a street legal bike, but I think I could live with that.

I need to get my carrier built before I get a bike so I’ll just wait and keep looking for now.

Paint and clothes and bolts

From there I went to Wal-mart to get some paint to paint my carrier . I ended up getting a lined over shirt for the cold. It’s the same as my favorite shirt that is ragged and wearing out.  I also found a pair of shoes of the style I like.

One more stop at the hardware store for the bolts and I headed on home.

The rain had stopped but it was late in the day.

Not a lap cat

The cat was there to welcome me home. She’s an interesting cat. She is not a lap sitter and if you try to pick her up or put her on your lap, she gets antsy and wiggles and jumps down.

I’ve been trying to train her to sit on laps. She does like her neck and ears scratched so I’ve been doing that a lot.

Last night she came over to where I was sitting and wanted a scratch so I scratched around her neck and ears. When I stopped she would look at me and I’d pat my lap. She’d just look, but eventually after doing this several times, she did put her paws on my lap, but still no go. I’ve got another week to work on her before her owner comes home.

Here she is on top of my old car, one of her favorite spots. 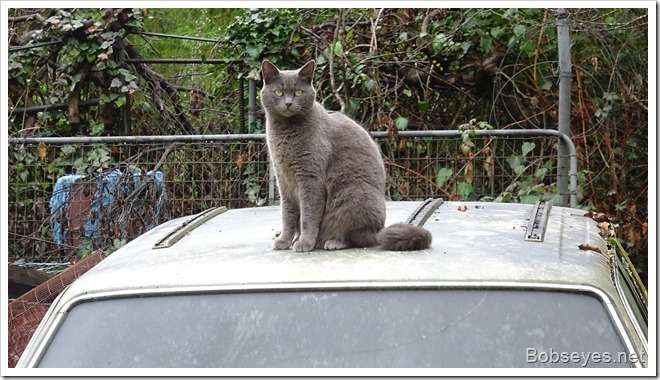 I put the groceries away and the other stuff too.

One other little problem I have is with the Golden Gate bridge toll fees.

Last time I got a bill I paid for four times, three crossing over what I was billed for thinking they’d carry the excess forward for some more crossings, but no, I got another bill for my last crossing and it didn’t acknowledge my over payments. Darn, you’d think they had a better billing system than that.

So I tried to call them to get it fixed up, but with the holiday, the phones were all backed up and my newest bill is due in a couple days and they say their phones won’t be freed up until later in the week, so I made out another check and mailed it in just in case and will try to get a hold of them later to see about getting this thing fixed up.

This weeks rains look lighter than they first predicted so maybe tomorrow I can get another yak in.

(Visited 132 times, 1 visits today)
This entry was posted in Uncategorized. Bookmark the permalink.