Shopping for Fish and Fence Materials and Working On the Enclosure

I thought I better head over to Santa Rosa to the hardware store to get some wire to finish off the bottom of the garden enclosure. The weather guys said it was going to be windy at Jenner again today so I thought I might as well get this shopping out of the way and get some work done.

Fish at Cash and Carry

I went to Cash and Carry first to pick up some frozen on the ship ocean fish. They sell five pound boxes of several different kinds of fish. I got a rock fish box and a box of sole. It comes in cardboard boxes so I thought it would stay frozen while I did the rest of my shopping. I put the boxes under some coats I had in the car to help keep them cold. I buy this fish as so far, it’s been corn free as I’m allergic to stuff made from corn which is most stuff we eat in this day and age.

Next up, the hardware store

The hardware store wasn’t far from there. They have a drive in lot which is pretty nice when you need to pick up larger items, so I drove right into the fence supply area and parked to have a look around. 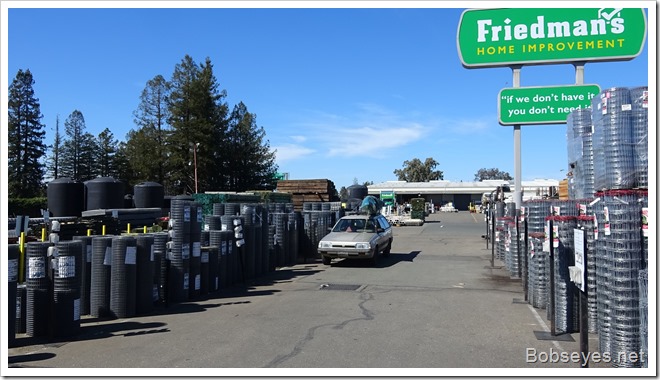 No 1 foot wire to be had

I needed some one foot wide heavier wire to do the bottom sides of the enclosure. This part will have dirt up to the top of it, one foot. I couldn’t find any one foot rolls of anything heavy enough to do the job, so I had to settle for some 18 inch wide stuff which I’ll have to bend to make it one foot wide, but that’s ok as it should help  make the wire last longer before it all rusts out, hopefully after I’m dead and gone which I hope to be a long time yet. :O)

Checked on some water tanks

I loaded the roll in the car and noticed the water tanks were right here too, so I had a look as my friend Marty is interested in one for his Boonville cabin.

I walked over to these water tanks and down to the smaller ones at the end of the green tanks. 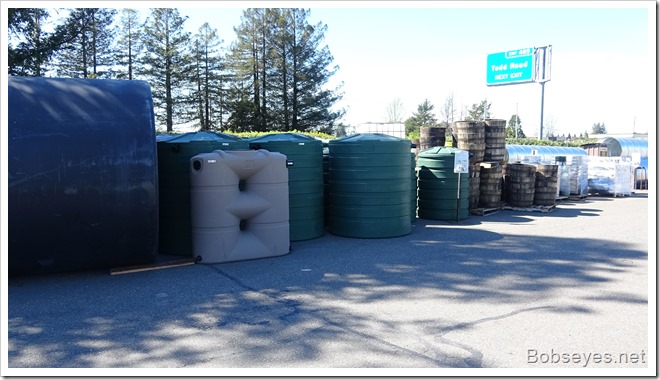 These were 425 gallons for 400 hundred dollars which might work for him. 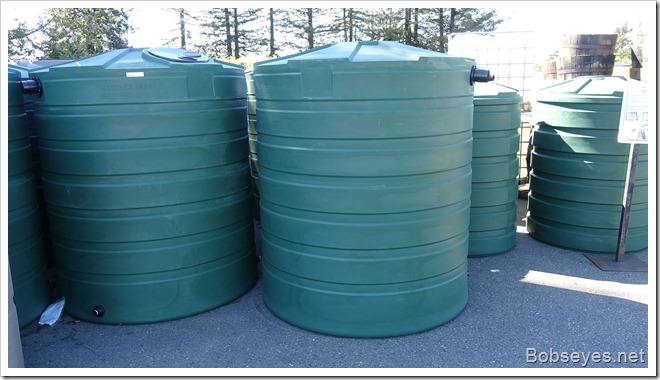 From there I walked into the store to get some more Shoats, which I’m using for fence clips. The other day I noticed the shoats had directions for use so I read them. They were actually made to put in hogs noses, likely to keep them from rooting, but thinking about squeezing one of these sharp clamps on a nose hurts just thinking about it.

Here’s were I picked up a couple more boxes of the fence clips. 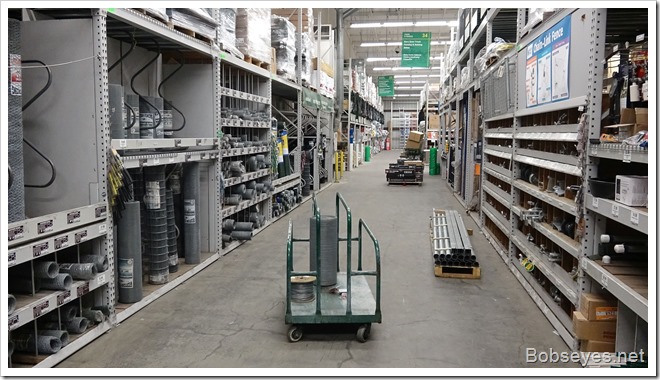 I paid for my stuff and drove on home.

After a rest I started working with the wire I just bought.

Rolled out and cut to length

I rolled it out and cut it to the size I needed. 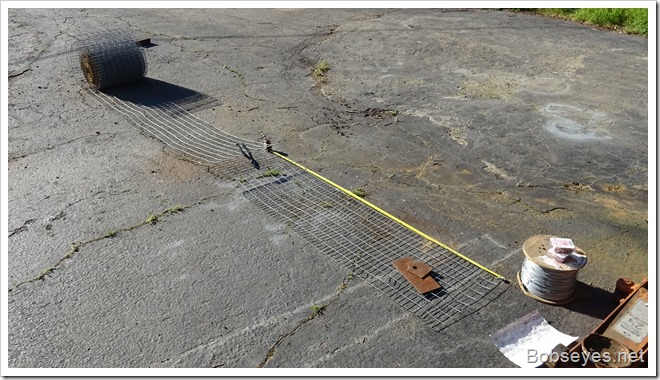 Then I had to bend six inches up so I could fold it over. I bent it this far my hand. 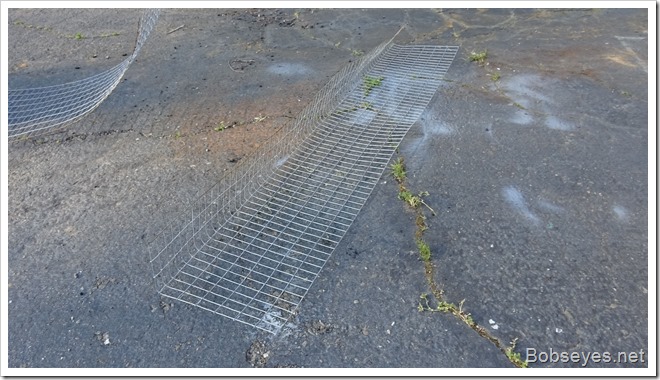 1 foot just what I needed

Then I bent it a bit further by hand and stepped on it until it was smashed down nicely, like this which now makes it one foot, just what I needed. 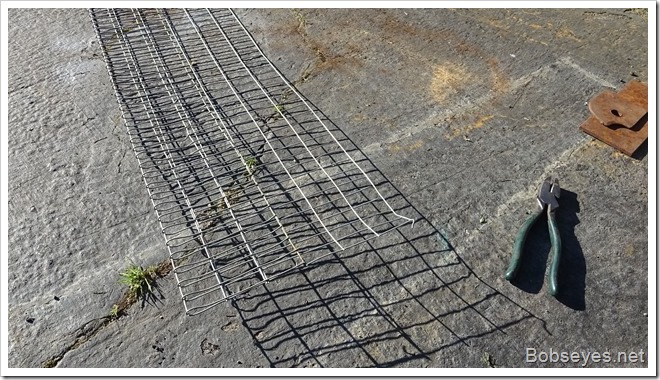 And then installed the wire

I installed the wire on this end of the enclosure first. 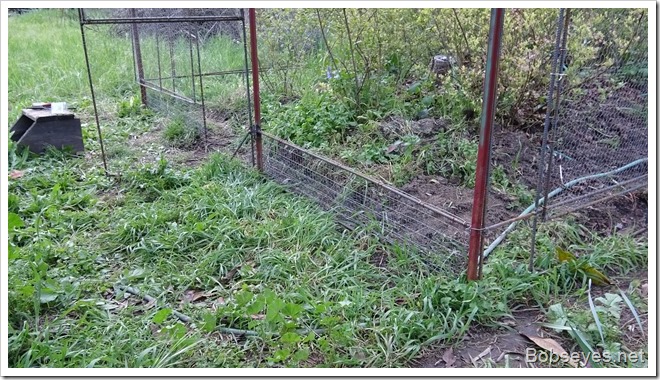 I noticed these blue flowers were just blooming right by were I was working. 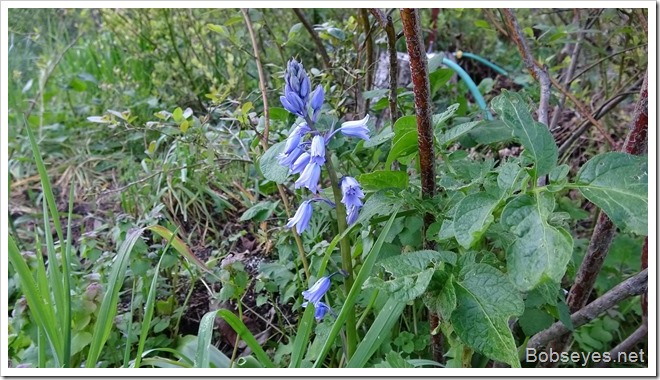 Then I did the other end of the enclosure which looked like this once I had it all clipped to the rebar. 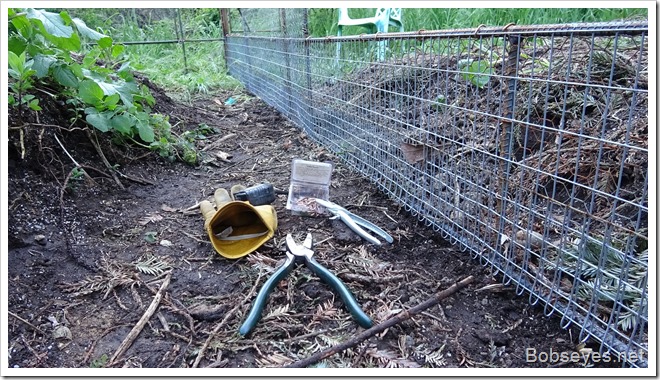 Wore me out again

That was enough to pretty much wear me out, so I stopped there for the day and sat in the yard until it started to cool down and I went inside and that was my day.