Shopping, Dirt Bike, Repairs and Who Stole the Apples

I was off to the feed store once I got it going to get some chicken feed at the Friendly Feed Store.

I put on my mask and made quick work of that. Ha, that sounds like I robbed the place eh.

From there I drove up to my brother Mikes place in Healdsburg. He wanted to gift me his dirt bike which is the one I’ve been riding. He bought it a couple years ago and then his health failed a bit so he can’t ride it.

He had to sign some transfer papers and now I have to get the stuff officialated. Yep that’s my word.

He needed some help with  his swimming pool controls as a little timer motor stopped working so I got my tools out and helped him with that.

The little motor is on the open timer box. I had a hard time getting the screws out because one of the heads was stripped but we worked on it and it finally came loose. 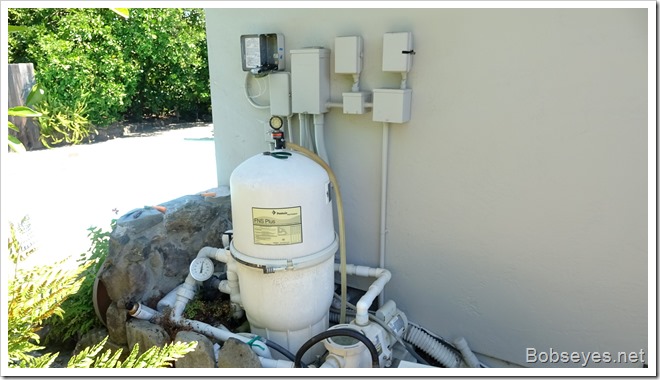 This is the little motor I replaced with the new one he had bought. 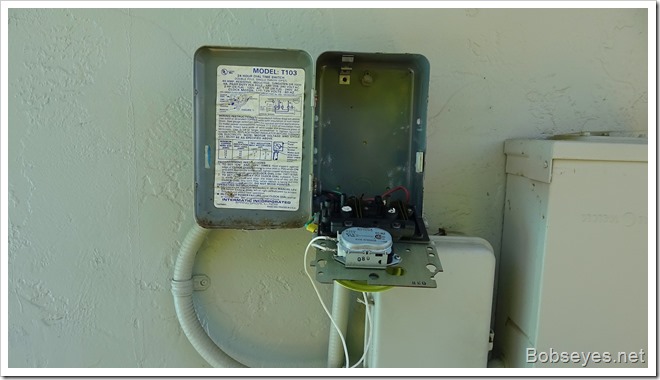 I got it back together and then asked about oranges as he grows some really good ones. He showed me the tree as most of them were gone by now. It was some kind of huge tangerine or something like them and the one I ate was yummy, a real treat. You can’t get them from the stores with the great taste you can get them from off the tree, much better.

Walmart was a bust

Now off to Walmart to get a few things. That was a waste as they were out of most of the stuff I wanted. Oh well I didn’t really need anything and can get by with what I have. I wonder if that’s a sign of some world problems coming up?

From there I headed home stopping to visit Joe which is on the way.

Well Joe was home but he was real busy. He’d rented a big lift to cut down some big limbs off a big tree with limbs about two feet in diameter. He was just trimming off some of the limbs as they were shading his garden. The big lift machine was rented by the day so he had to get done to get it back to the rental place.

So we chatted for a short time and I left to let him get back to work and drove on home.

I unloaded the car putting the sacks of chicken feed away.

Than I sat and supervised the chickens for awhile. They learned that I bring good stuff to eat so they’ve learned to hung around close just in case I might give them something. 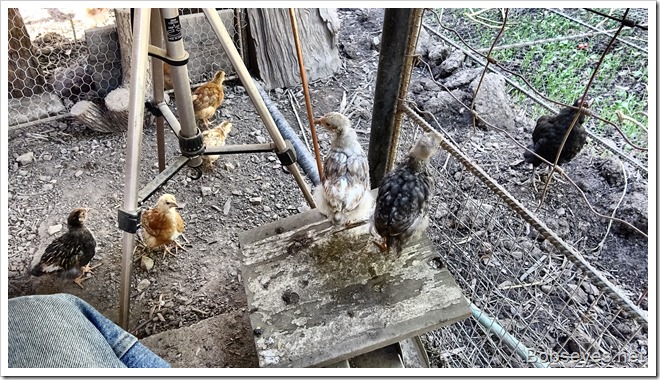 I needed to check our tanks water supply to see how we were doing on water so I hopped on my new dirt bike and rode up to the water tanks. 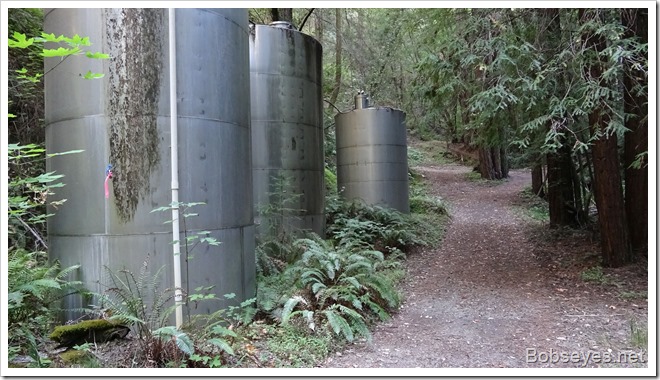 The pink flag shows we are about six feet down from the top which is good for this time of day so water’s doing ok and we are not using more than we have. 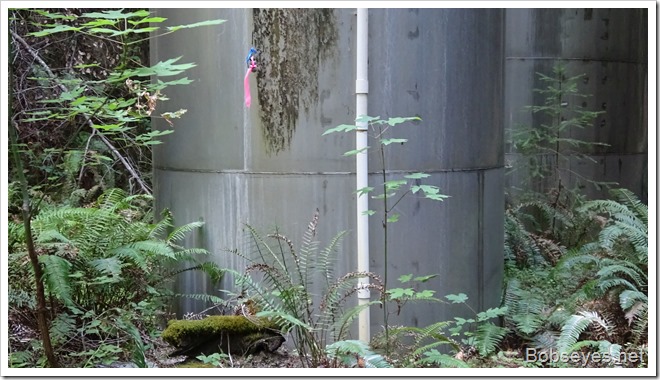 As long as I was on the dirt bike a bike ride was in order so I rode up this road headed for the ridge top. 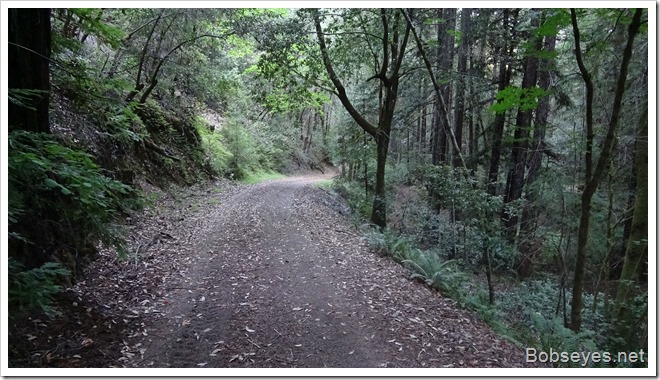 I stopped at the overlook that looks down on Guerneville and looked down at the town. 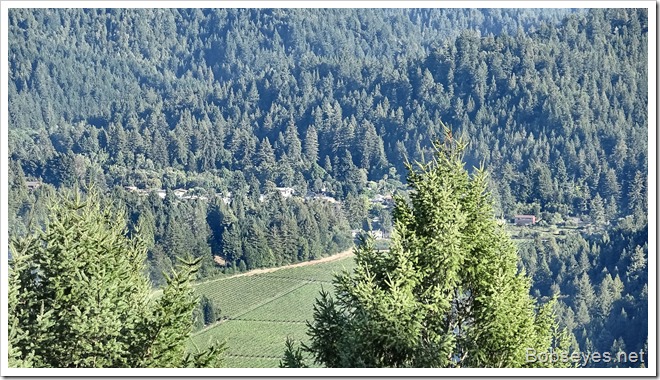 Guerneville is a small town by the Russian River that’s in a big forest. It was originally a logging and mining town then a tourist blowout area for the bay area in the old days so it has a lot of history and my great grand dad came into the area around 1862 or so when he was five years old. 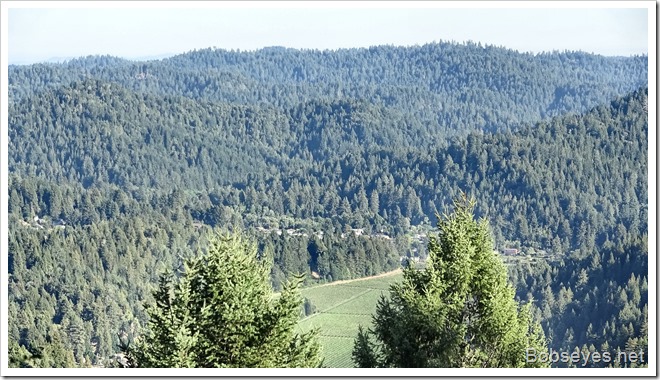 I continued the ride on the neighbors place going to what they call the Top of the World here. 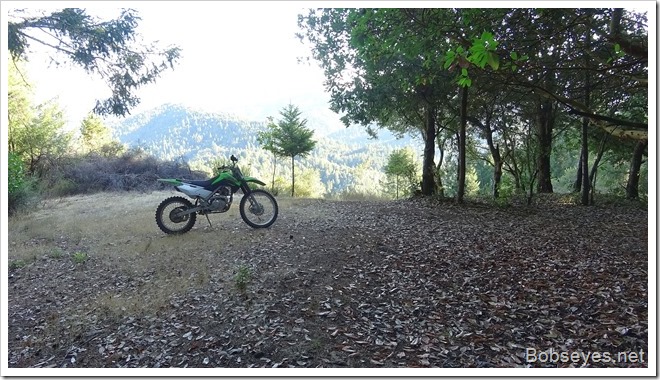 This spot looks out over most of the hill tops in the area. The Pacific ocean is just on the other side of the hills looking in this direction. 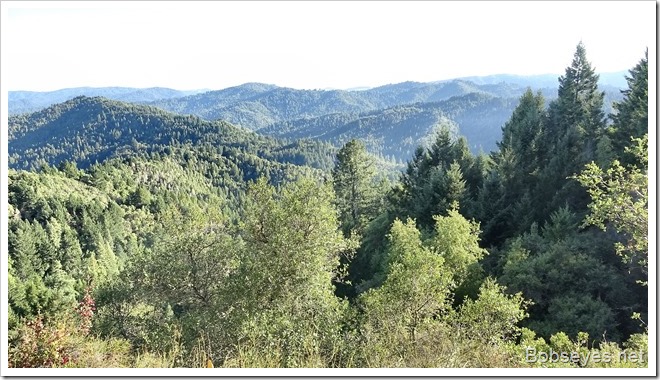 Who stole the apples

I rode around a bit more then headed on down the hill to my brother Tom’s garden area. He’d said someone stole all the ripe apples off this tree yesterday and was a bit upset that someone would come in here and do that.

That’s the apple tree with the ladder. This is one of the best apple trees here and very old. 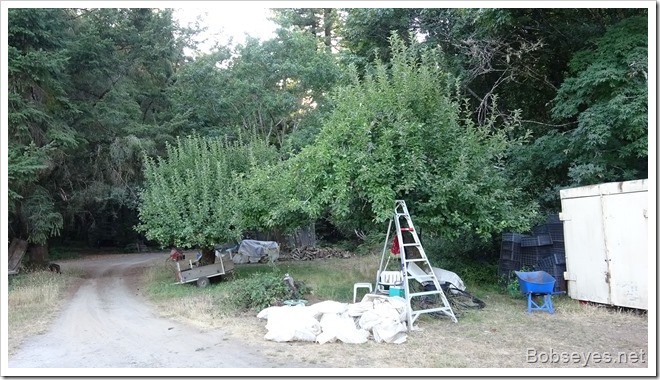 As I approached on the dirt bike and stopped I saw the culprit getting away.

I saw a gray squirrel running off with one of the apples in it’s mouth. So I bet yesterday a whole pack of them were in that tree and that’s were all his apples went.

I was headed to the strawberry patch but first I had to get by this plum tree. The plums looked ripe so I picked one and ate it and it was real yummy, just right. I think he said they were plumcots or something like that. 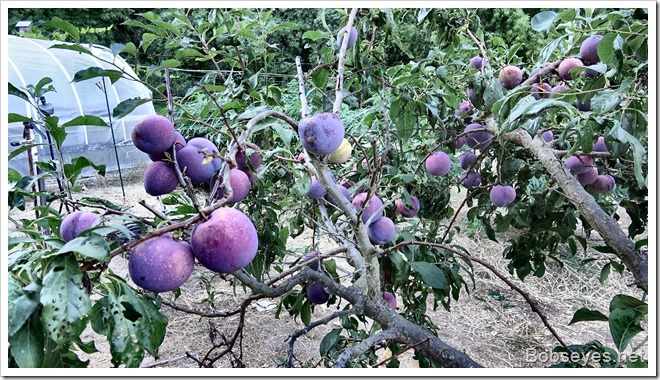 Only a few strawberries

I didn’t do as well at the strawberry patch as they’d just been picked but I did find a few ripe ones.

I went on home and put the bike away and did some chair hopping and puttering around the yard but mostly just enjoyed the day.