Shopping and Checking Out Some New Motorcycles

Today was another cool one with a bit of drizzle so I decided to go do some shopping;. I also wanted to go to a couple motorcycle shops to try sitting on some bikes to see how I felt about them.

I started off at Wal-Mart and than went to Costco and bought some stuff.

From there I went to the first motorcycle shop witch was this one. 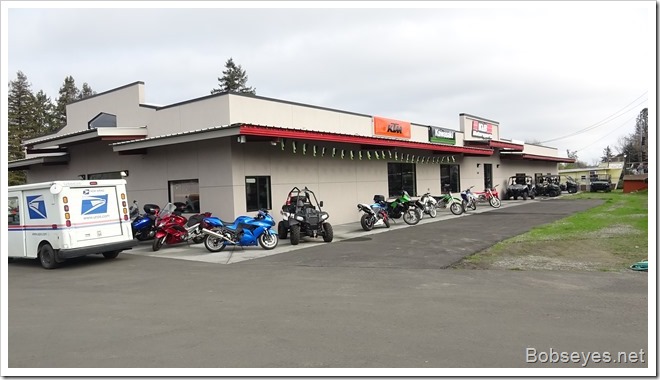 My first question was what is the legality of blocking your lights and license plate with a motorcycle. He said he hadn’t heard of anyone getting a ticket as long as you didn’t completely block them. I’m not sure I want to take that chance.

I asked him if I bought a dirt bike can I put a light kit on it to make it street legal. His answer was it’s not legal in California to change a dirt bike to a street bike.

So I looked at bikes with lights on them first then the dirt bikes. I was thinking a 250 cc bike was bigger than I needed for desert riding and a smaller bike would be better. I’m trending toward a smaller bike.

I did note the price tags where a bit over my budget. Adding the set up charges and the state tax I’d need about another thousand dollars added to the price tag.

Here’s the inside of the showroom. They have lots of bikes. 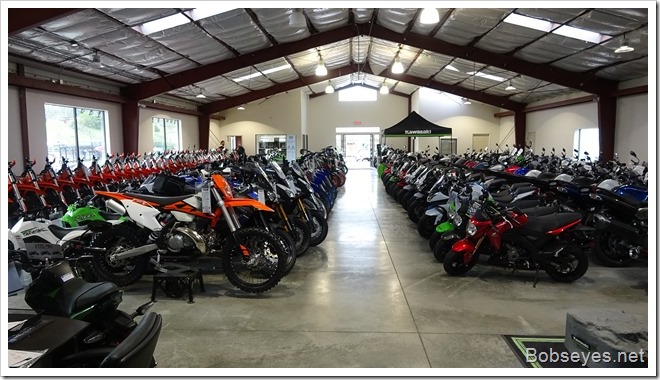 From there I drove over to this one and went on in. I knew the people at this one. I bought an Ossa bike from them back in the 1970’s. 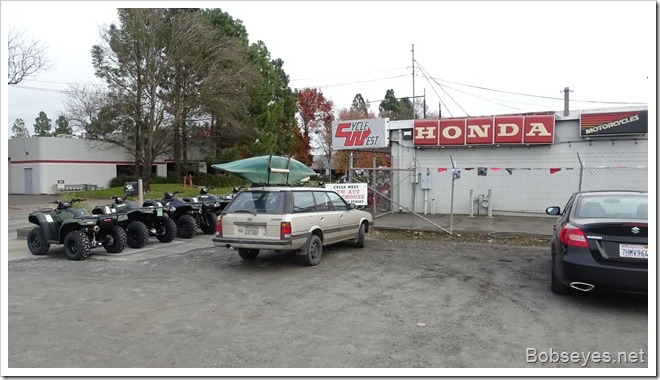 He showed me some bikes and I sat on some of them. The last bike I sat on was a Honda 125 dirt bike. It was a bit smaller but actually more like what I need for this job. About a thousand dollars over what I had in mind to spend though. If I was younger and needed to rip roar, I’d get something around a 250, but I’m not. I figure I’m safer on a bike that doesn’t go so fast at my age.

So maybe a 125 or 150 Honda might be what I need. The new bikes are way over what I had in mind to spend with setup and taxes, it makes more since to buy a used one.

So while I’m deciding on which one I’d like, I need to get my van’s cycle carrier built so I have something to bring a bike home with. Once I have a carrier made I can buy one anywhere which I might do in Oregon, especially if I get a new one, no taxes, but I bet California would get me for the taxes when I register it in California?

I accomplished what I wanted

I accomplished what I wanted which was to check out some bikes and sit on some and get an idea of what the new costs of bikes where these days.

Toyota tire not ready yet

I drove on home stopping at the tire shop to see how it was going with my old tire he was repairing. I was a day early but just thought since I was driving by he might be finished with it, but he wasn’t so I drove on home.

I spent some time putting all the stuff I bought away and then had a nap.

It was drizzling lightly on and off outside so I decided to just stay in for the rest of the day and that was it for me today.

1 Response to Shopping and Checking Out Some New Motorcycles