Sea Lion Steals Steelhead and We Repair Our Water Line

Getting a yak in

The wind was supposed to be down below ten miles an hour today at Jenner so I drove on down to get a yak in while I can.

This was my view as I crossed the river to Penny Island and headed on up stream as that’s the way I decided to go today. 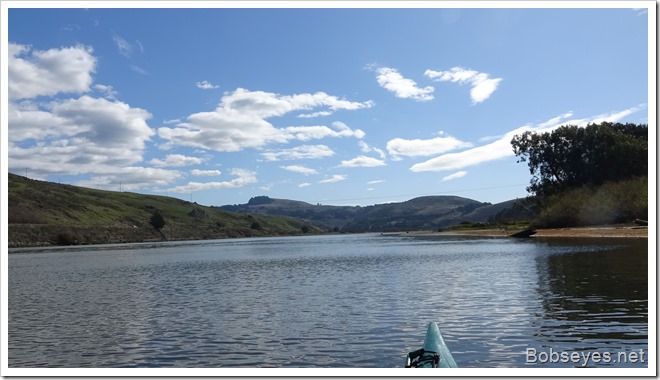 I paddled up along the shoreline taking it easy. 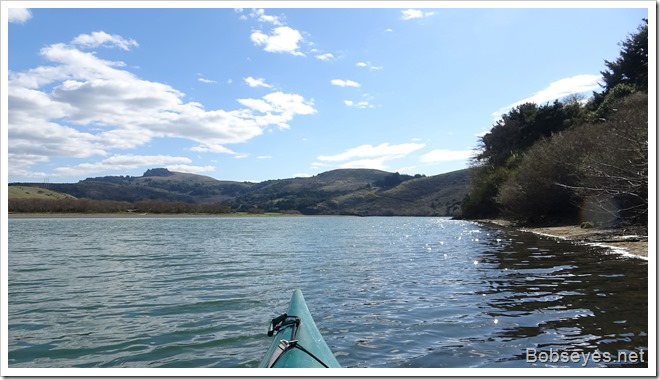 I made it up to this spot I call Eagle’s Landing and sat for a bit in my boat. 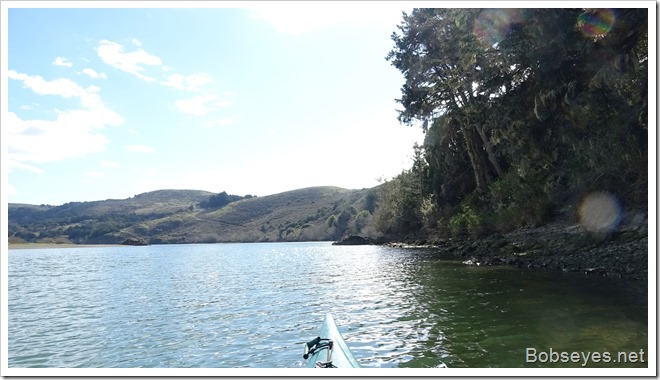 Not many cormorants this year

Across from that spot is Paddy’s Rock. About a thousand cormorants usually hang out there this time of year as they seem to like eating all the hatchery fish that are released in February.  So something must be different this year as I’m only seeing small numbers of cormorants. 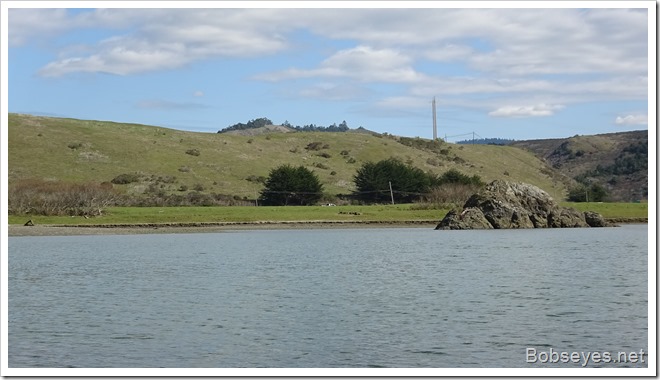 After a bit I started back down stream paddling by here. 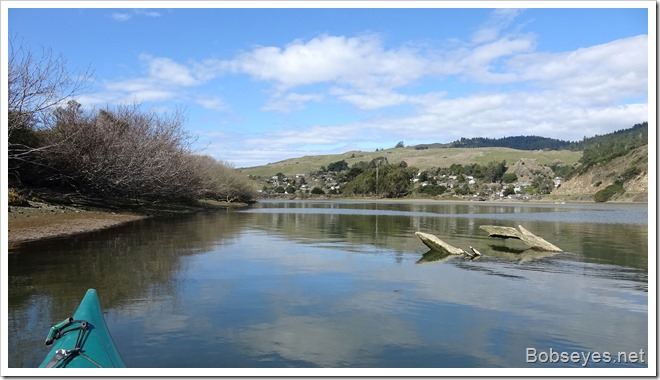 Paddling down the back channel

I paddled down the islands back channel which came out here at the lower end of Penny Island. 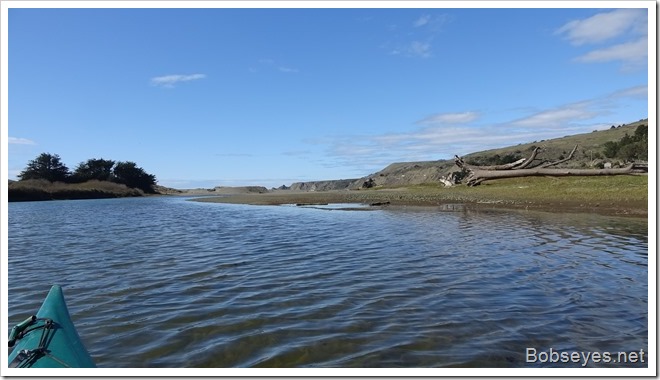 These mallard ducks were resting on the lower end of Penny Island. They had their eyes on me and got a bit nervous as I passed. 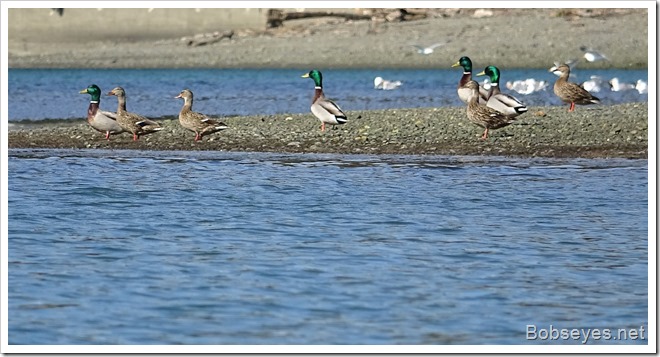 Just as I rounded the lower end of the island a big sea lion surfaced in front of me and barked then took off across the river. The next thing I see is a lot of splashing. Seems the big sea lion took a big steelhead fish from the harbor seals.

The harbor seals can’t swallow a big fish like this whole, but a sea lion can.

Here’s my best picture of the sea lion just after it swiped the fish. It’s setting the fish up to swallow it whole, head frits so no other critter gets a chance to steel it. It doesn’t take the seagulls long to come and try and get some scraps, but when a fish is swallowed whole like this there aren’t many scarps as compared to a bunch of harbor seals tearing it apart to eat it. 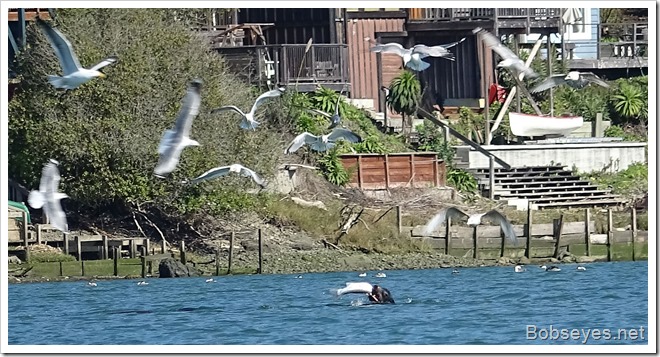 Here the sea lion is putting the fish down the hatch and that was it. 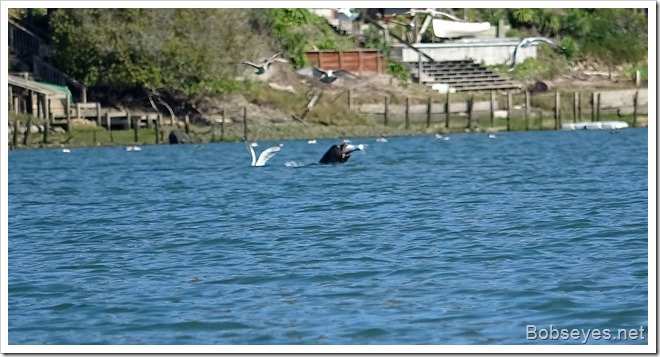 I veered off and headed down to the river’s mouth area which looked like this as I sat in this spot watching. 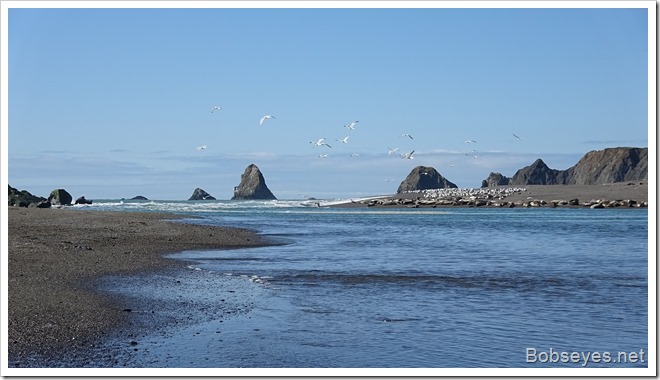 I could see some of the cormorants that are usually here to eat the small released hatchery fish, but only a few of them seem to be present right now. Could be there are no fish or there are better pickings somewhere else. 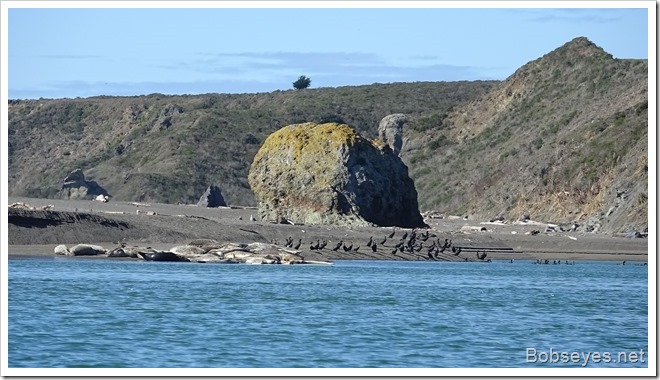 There’s always quite a number of harbor seals resting in the area. These are resting on the right side of the open mouth. 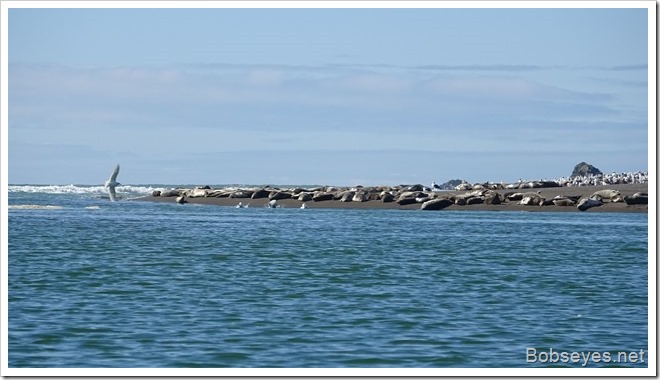 I saw a splash in front of me, but didn’t see what made the splash so I watched and this loon surfaced after a few minutes. 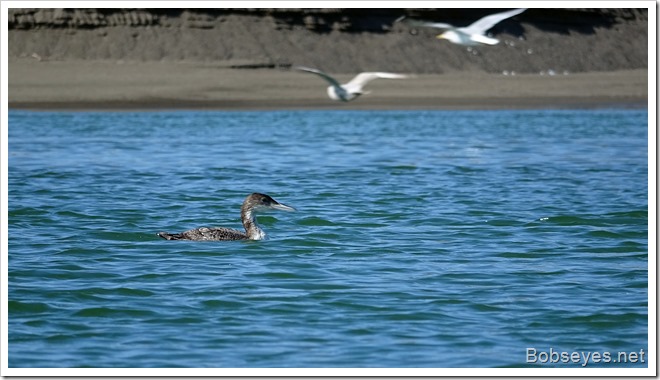 I headed back towards the boat ramp going by these cormorants resting on the big rock. 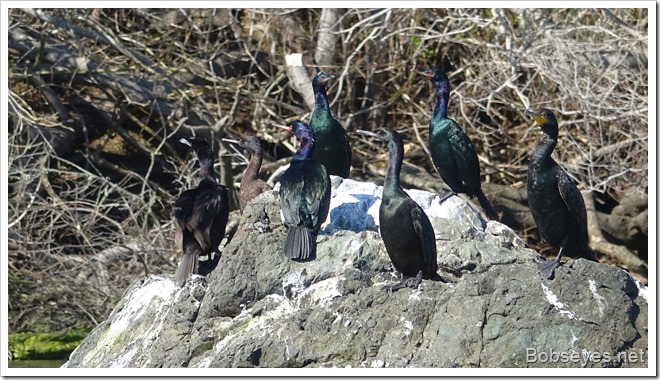 As I was paddling I could see this small flock of grebe, so I paddled into them as they aren’t too skittish and will tolerate me, just paddling around me to avoid me. 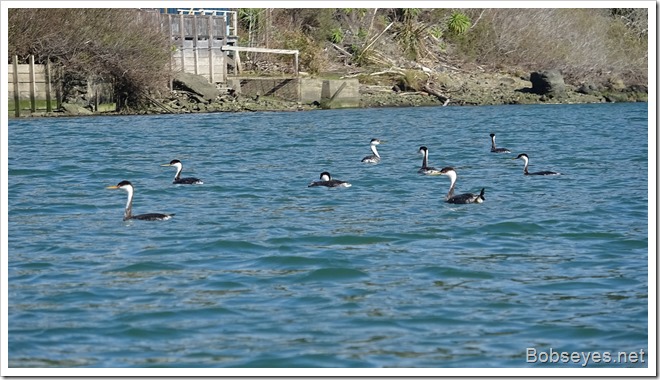 The boat ramp is up ahead. I pulled the boat out and drove on home. 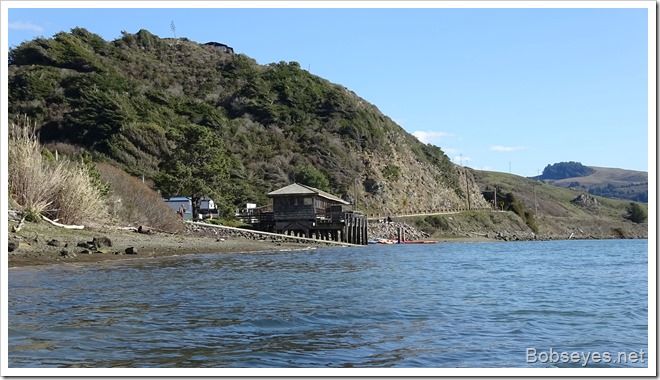 Once home I was talking with  my brother Tom and he said the water line going to our water tanks was on the ground blocking the road. So we got some stuff together and rode up to repair it. Somewhere along the route, my good linemen’s wire cutters disappeared from the front basket on the quad runner. We needed those to cut wire for the repair, so I drove back to the house looking for them, but couldn’t find them, so I got some other cutters and returned to the downed water line. Those were good cutters and I’ve had them for a long time. They should show up eventually, I hope before they get too rusty.

Tom and I tried a few things trying to get the water line back in the air and off the road, but things weren’t working out until we put things back more like they were originally.

Need to check the water lines for leaks

We got that done and then I checked the water coming down the hill from our springs and thought there should be more so I need to walk the water lines to check for leaks which I need to do before heading to Arizona, so I need to get with it.

By the time I returned home the sun was behind the hill I just came down so that was it for me today.

Tomorrow will be a shopping day as I need to get some supplies for my upcoming trip south.