I awoke at my camp at the bottom of Maggie’s Summit yesterday and decided to push on to the Duck Valley Indian Reservation mostly because I could get internet access on Friday but not on the weekend and they had gas and groceries at their store.

This is the valley I went through after coming off Maggie’s Summit on the way to Mountain City. 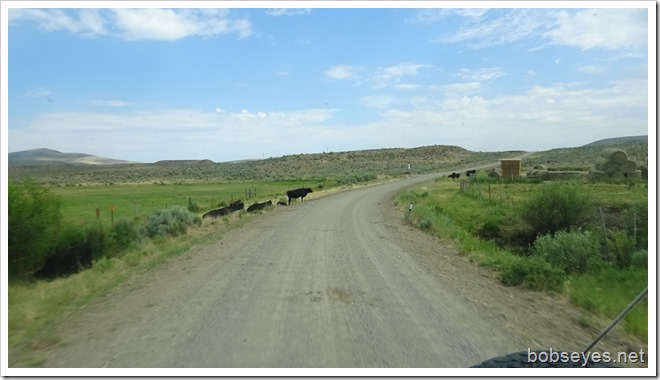 I don’t’ think that store is going to open, so maybe I had it wrong

This is going through the town of Mountain City. The gas station looked like it was going to open, but something happened and they never unloaded all the crates out front, or maybe it’s just been used to store all that stuff and I thought it was going to open? 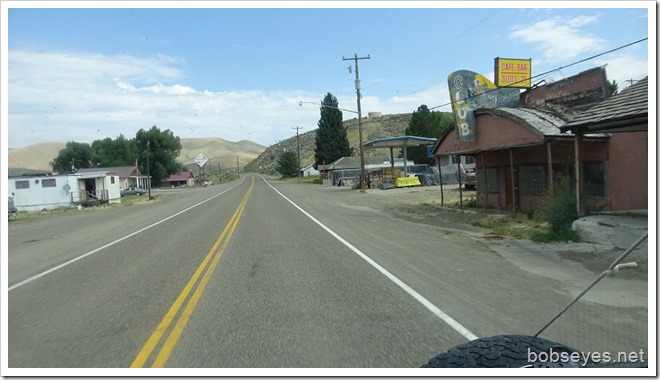 Owyhee is the town in the reservation. I pulled up by their computer lab by the school to use the internet. They were having some kind of Indian get together right next door and they were playing some good drums. 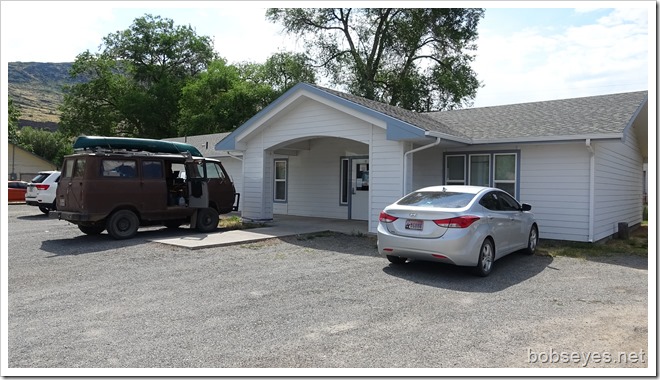 I drove north of town to their store and got some gas as it’s always good to top up in the desert and I got some produce. 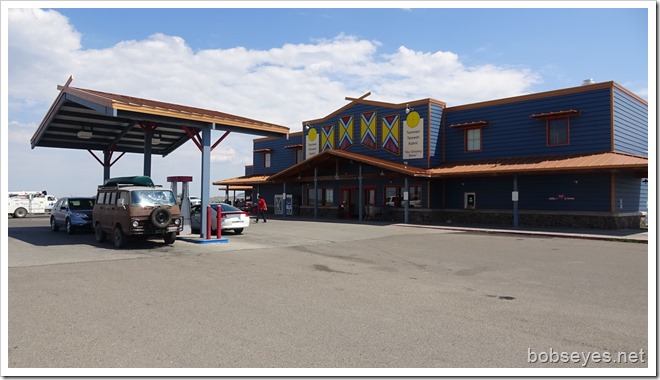 The road to Roland

From here I decided to go north some more and find the Roland road that I tried to take to Scott’s ranch last April when I was up  here, but the road was washed out then so I hoped they fixed it.

The road to Roland starts out like this for about an hour and a half. 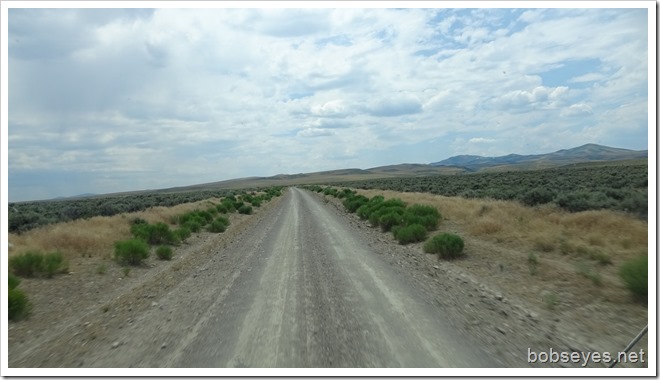 And then the road drops off the higher part into the river basin down this road where it was washed out before, but hopefully not now. 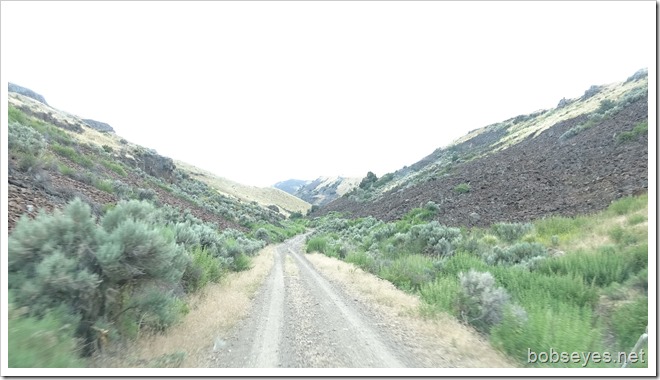 Surprise surprise, but go for it

To my surprise no one had fixed this road although it’s a fairly main one. I decided to do it after looking at this first hole. At least the water isn’t raging down it like last time and I could see the bottom of the hole was rocky and not too deep now, so I decided to go for it. 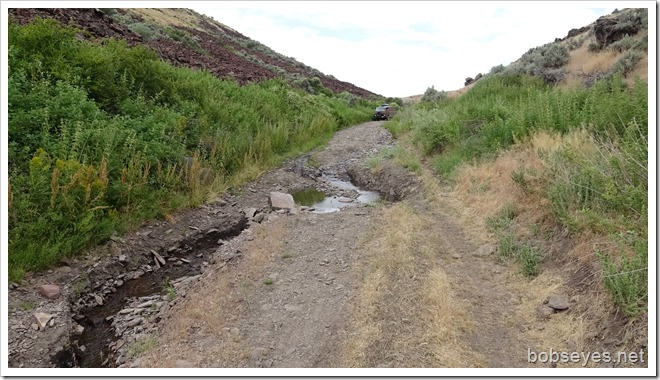 I went through rough road for abut two miles before things got better. 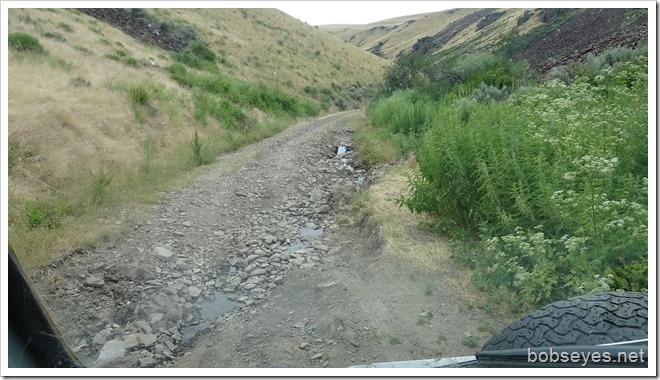 Looks like I’m going to make it to the ranch

This is the Bruneu river as I crossed the bridge to the ranch area just up ahead a bit. 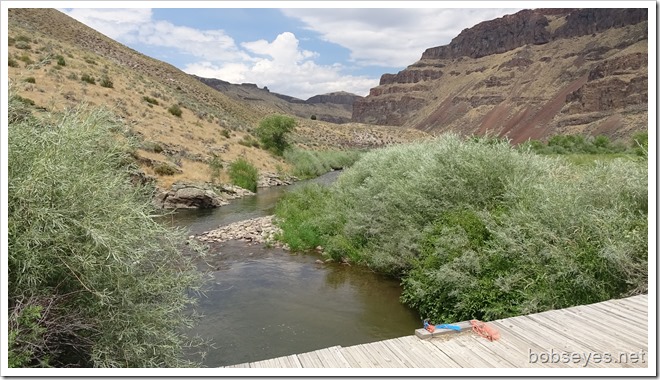 I pulled in under the trees at the ranch and camped in this spot. It was warm about ninety degrees f. Most of the time there was a good breeze which helped. 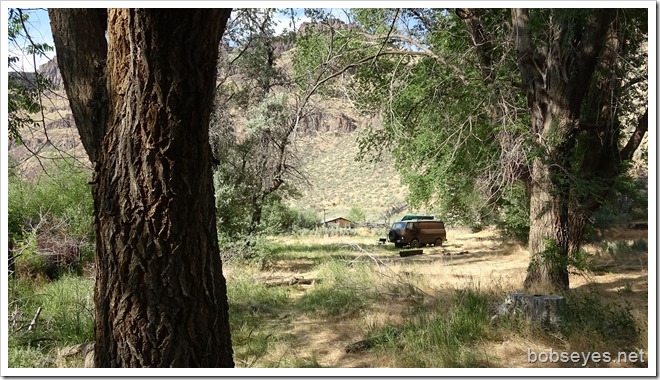 Reflections of an old swing

I spied this old swing by the old house. Should I give a try, no, yes just for old times sake. Old swings on old places have their own reflections, so I sat on it and reflected about the old place for a bit. 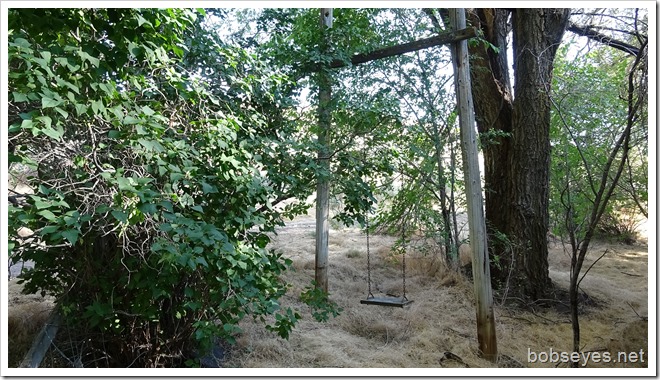 Down along the river

I was hanging out in  my van waiting for the sun to go down a bit as I wanted to go for a little walk down along the river about a mile. So once the sun went down I donned my long pants and long sleeve shirt and started off on my walk pasted this old barn. I’m camped back in those trees. 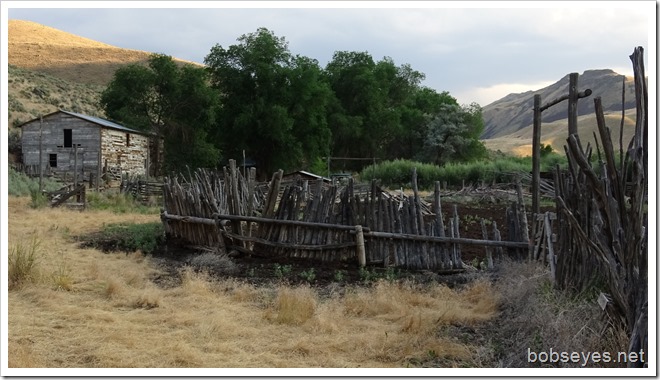 I walked down to this meadow with the river going by. I noted that the marmot migration had already been through here and I was thinking of going for a walk  further down the river, but. 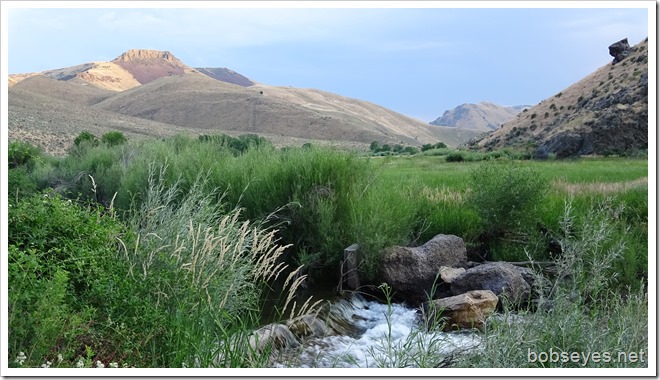 The mosquitoes were just starting to attack so I was having some second thoughts about staying here. I decided to see how the bugs were in the morning then I’d decide.

When I awoke the next morning and looked out I saw this rabbit out there. 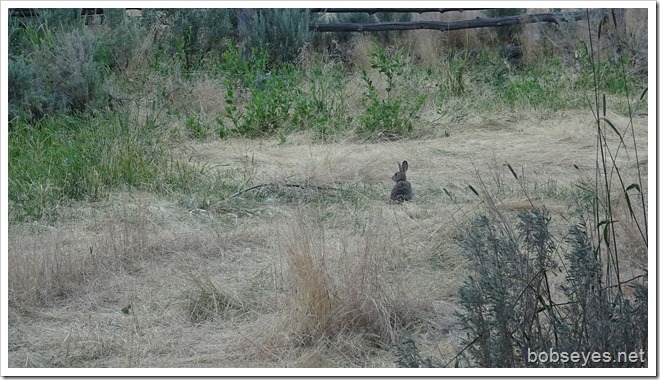 And this marmot getting some sun and watching the rabbit. 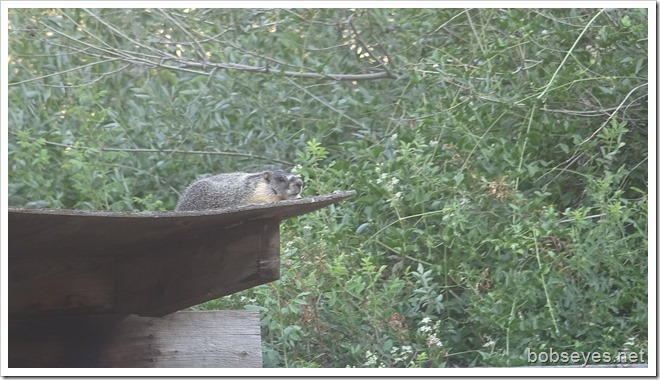 Broke camp and headed on down the road

The mosquitoes were active as I got it going, so I broke camp and headed out down the road  going by these antelope. 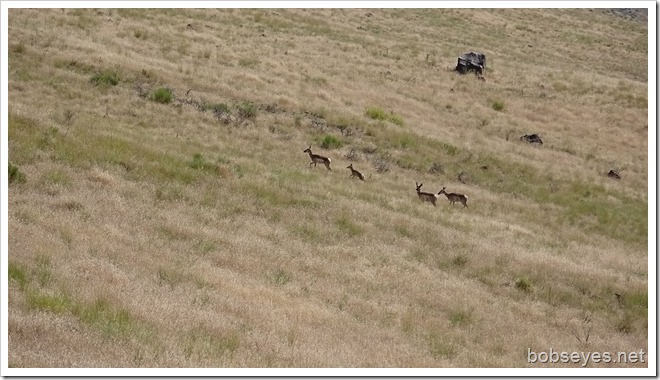 So much for my plan

My plan was to drive to my camp at Bear Paw Mountain and stay a few days. I got on the wrong road on the way in and had to go back to the beginning and try again. I drove about an hour on this road  and almost got to the camp spot and ran into a wet spot I didn’t want to take any chances with so again had to drive back and decided to go back down the main road to another road in I know about and took it to the spring camp on the side of Bear Paw Mountain.

Typical roads I drove on today looking for my camp on Bear Paw. 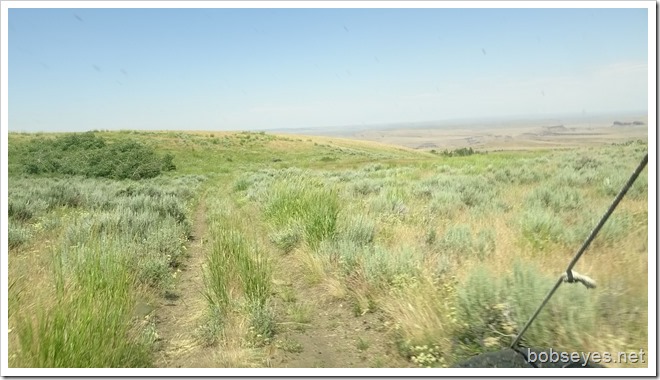 I made it to the camp at the spring, well almost. They had wired a gate across the way in. I think it was to keep the animals out. I looked at it and decided it was more than I wanted to deal with so I turned around and initiated Plan B. The one thing I forgot about was I could use some of that spring water to replenish my water supply. Oh well.

I drove back to this spot where I drove in and this goes over the top of Bear Paw and I was thinking of camping right in that spot, but I wanted to check out this hill first. 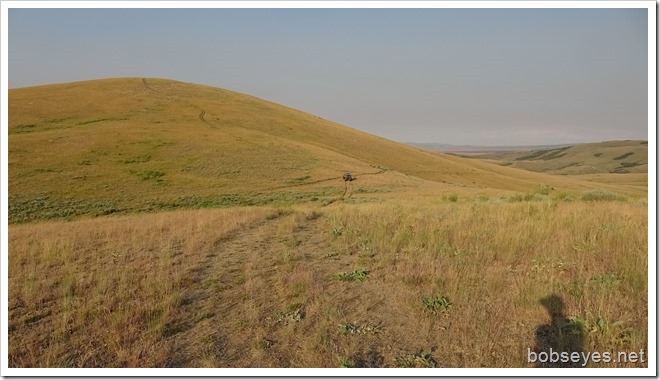 I moved the van the short distance to this spot and this is where I’m now camped for the night. There’s a fair amount of smoke in the sky from forest fires in other states. 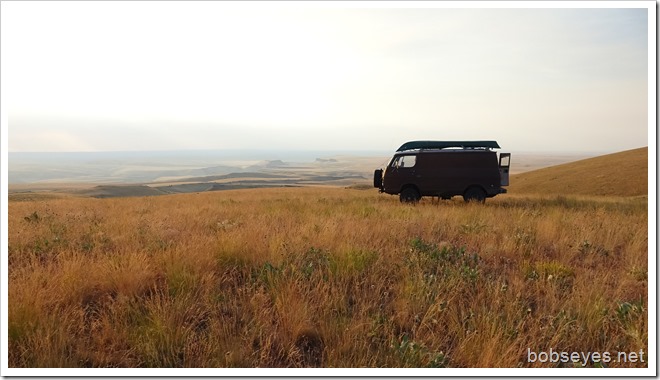 My view out the van side doors. 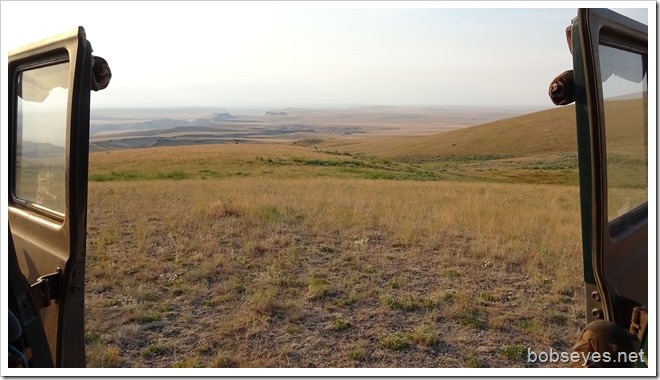 I haven’t decided to stay here another day or push on to the town of Jarbidge. I’m sorta leaning to Jarbidge. We’ll see how I feel in the morning.

It’s a bit cooler up here on the mountain top, only about 75 degrees F. with a breeze most of the day. I decided to stay and just take it easy. I needed a haircut so I did that and otherwise just enjoyed the day up here on the ridge.

There was a short thundershower late in the afternoon. After it passed I spotted this deer working it’s way over the ridge in a low spot about a 160 yards away. 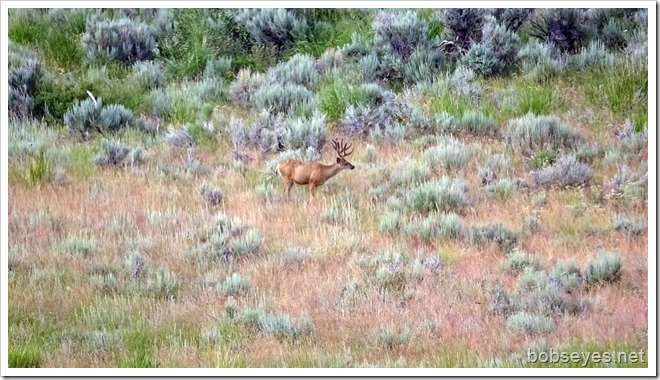 Always nice sunsets from up here. 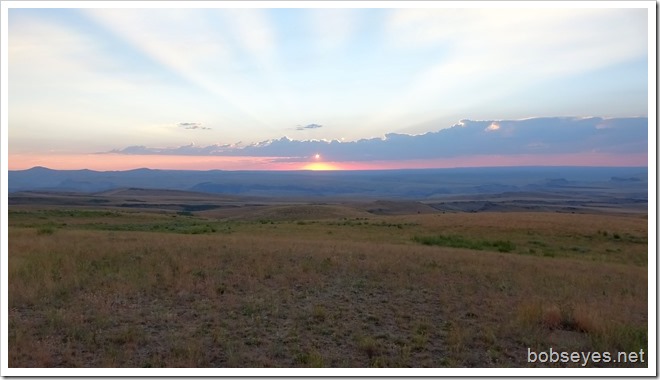 I’m thinking of going into the town of Jarbidge and maybe do something I don’t usually to and that is to hang out in town for a bit, maybe a couple days.

That was it for a lazy day, just enjoying the desert.

(Visited 203 times, 1 visits today)
This entry was posted in Uncategorized and tagged Bearpaw Mountain camp, Diamond A Desert, Scotts ranch on the Bruneau River in Nevada. Bookmark the permalink.