Saw Enough Fish to Say the Steelhead Are Running

I was thinking of doing some mechanicing today, but it was overcast and cool out, so it seemed like a better day to go down to the river and look for signs of steelhead fish coming into the river to get to their spawning grounds.

Since I was at  Monte Rio yesterday, Jenner was the  choice today. There was what I call a high,high tide today at 6.9 feet which is high for this area. Also called a King Tide.

Anyway, that might bring some big fish into the river.

I put my boat in the water and noticed the water level was just right under the visitor center so I pulled under there and studied things to decide where to go today. 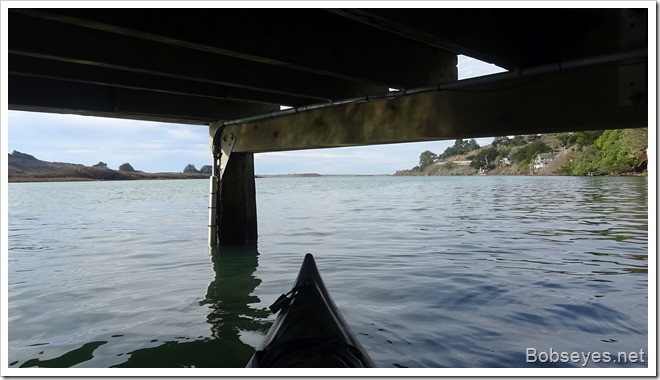 Things looked pretty nice even though it was overcast with very little sun, the wind was down and it wasn’t very cold.

Down by the mouth looked good so I paddled across to Penny Island and paddled down along it’s side. 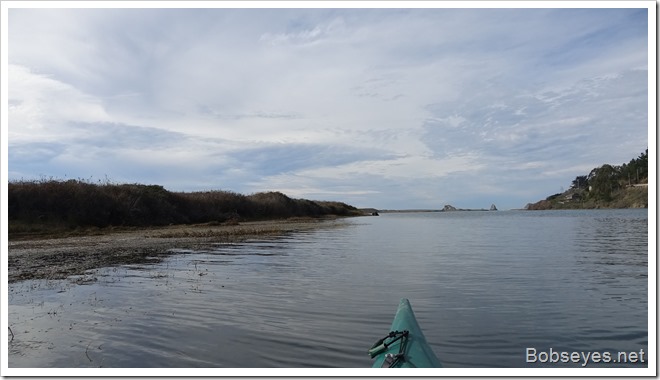 I paddled by the grebe. 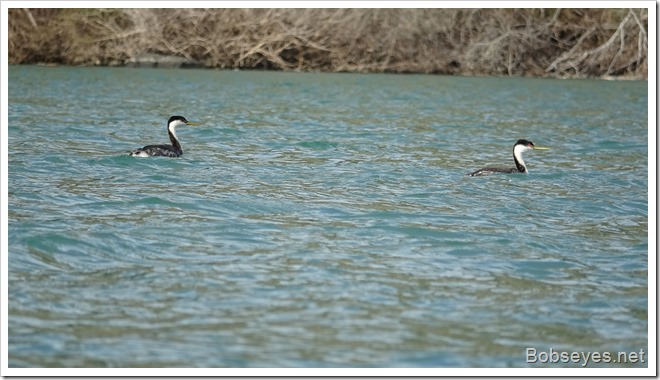 I made it down to the lower end of Penny Island and stopped for a bit to watch when I noticed the seagulls sitting on the water. Not just any seagulls, but seagulls waiting for a scrap from a big fish the seals were eating. Lots of times the seagulls are my first clue that a seal has a big fish and is eating it under water. 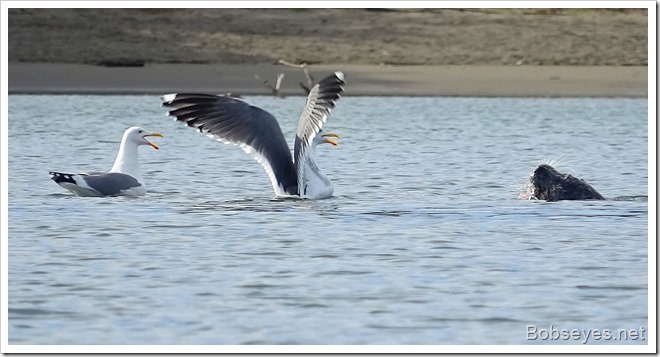 It looked like the big fish was almost consumed by the time I got there, or at least the seals weren’t going to show me a fish. 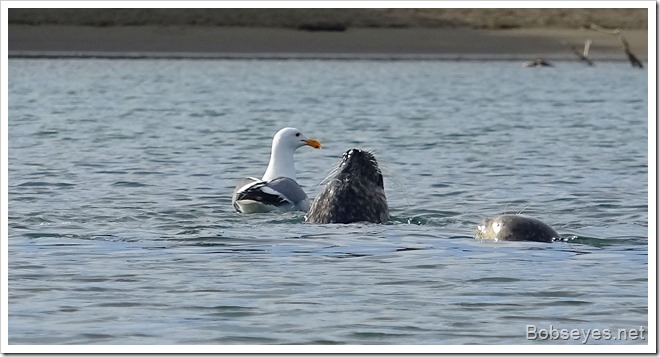 I left and headed down to the open river’s mouth to check things out. 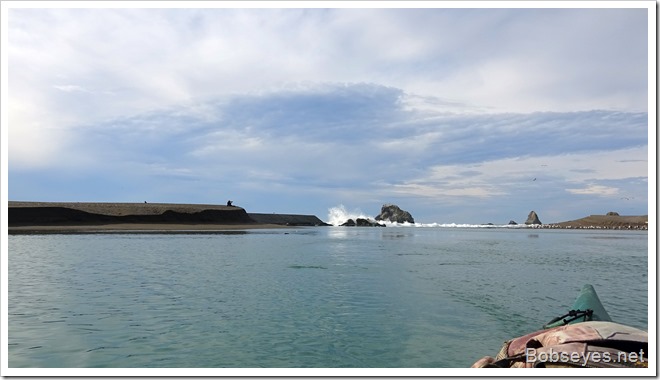 Here’s a few of the harbor seals resting down here. 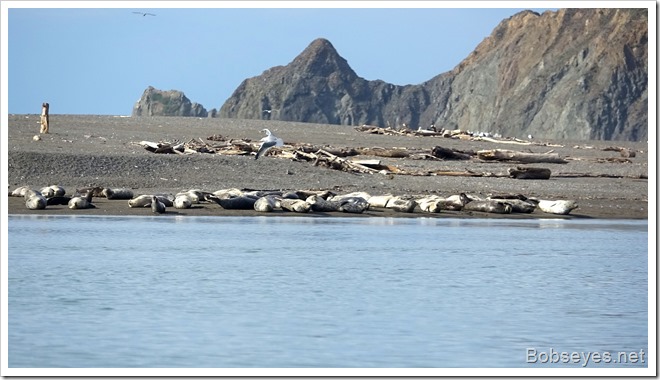 I sat in front of the month and thought it was weird the way this wave got kicked up looking out into the ocean. 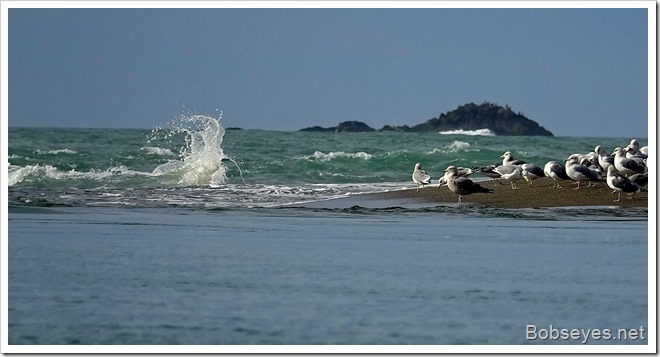 Checked out this fish spot

I sat there a bit and then turned and crossed the river here. I remembered I saw a bunch of big fish along the shoreline up  ahead a couple years ago so paddled over to the shore here to see if I would see any big fish. I was surprised to see a big fish wake moving along the shoreline just as I approached shore. It moved off to the right. 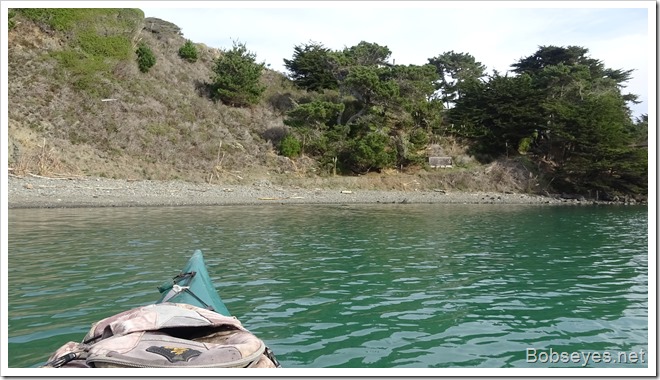 So I sat in the spot and watched for fifteen minutes or so, but no more fish. 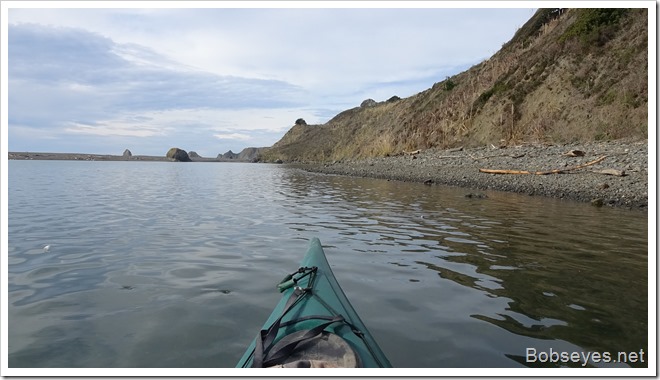 I paddled back over to Penny Island and was paddling up along here when a bobcat caught my eye, just sitting in the grasses. Can you spot it? They are hard to see when they don’t move. 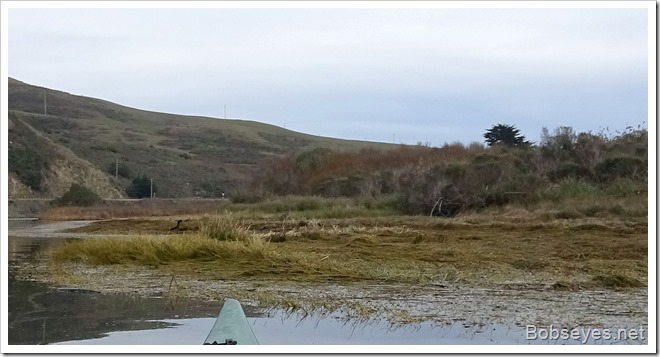 I turned the boat into the grassy shoreline and starting shooting. 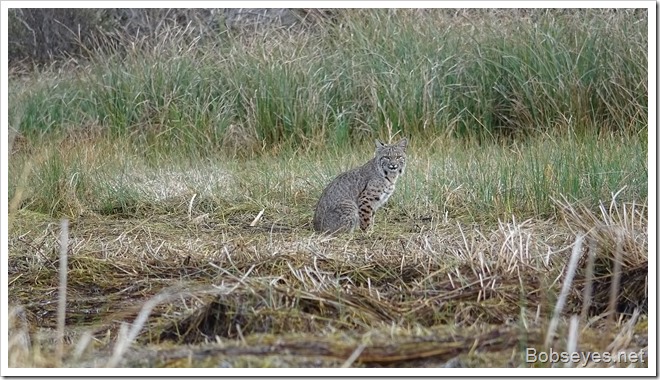 It would have been better if I turned  my boat away from the cat out into the river and it might have hung around, but things happened so fast I didn’t think of it.

The cat sat and looked at me for a few seconds and then turned and disappeared into the weeds. 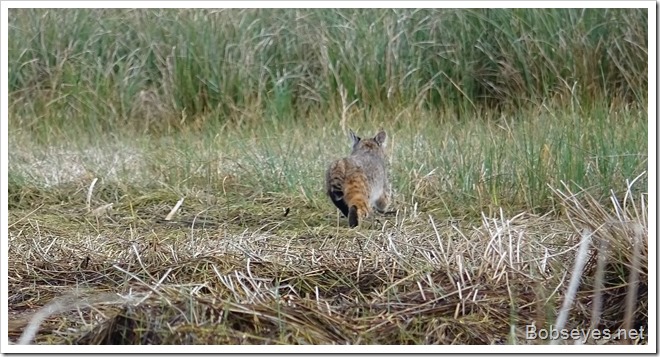 Animals get on and off the island by just swimming across the river, they don’t seem to mind. I’ve seen the deer do it.

Moving on up the river

I continued on up the river, stopping here to watch for a bit. 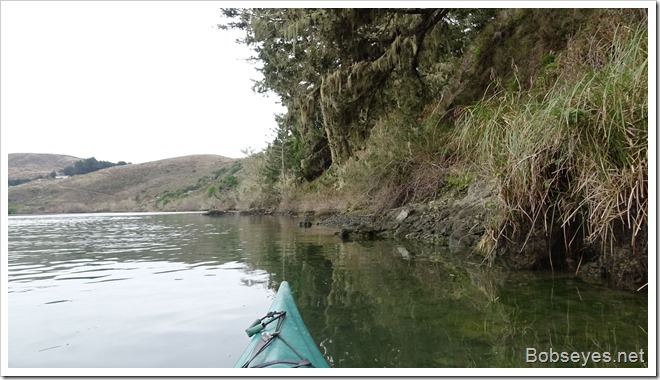 I paddled on up to this area I call Muskrat and hung around for a bit watching. Didn’t see anymore fish. 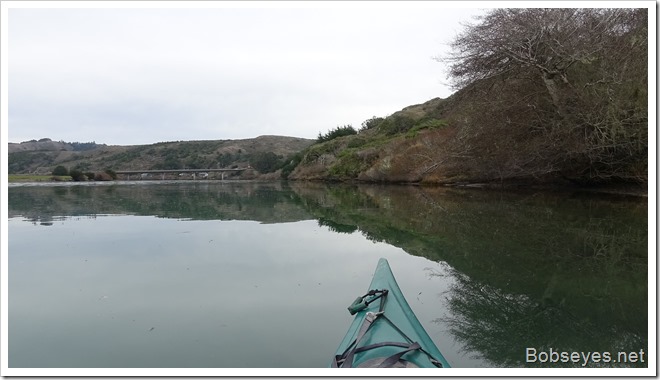 Moving back down the river

Eventually I started back down the river drifting most of the way as the tide had turned to low so lots of water was dumping out of the estuary.

At this spot I thought I saw a muskrat nest up in the leaf less tree in front of me so I paddled over to take a close look and was sitting right next to shore and checking out the nest.

Fish head pops out from under the boat

It surprised me as a big fish’s head popped out from under my boat onto the right side. Just as it did, it saw me move and all there was was a big splash and it was gone. To them a boat not moving is likely just like a log, a place for them to take cover from the seals. 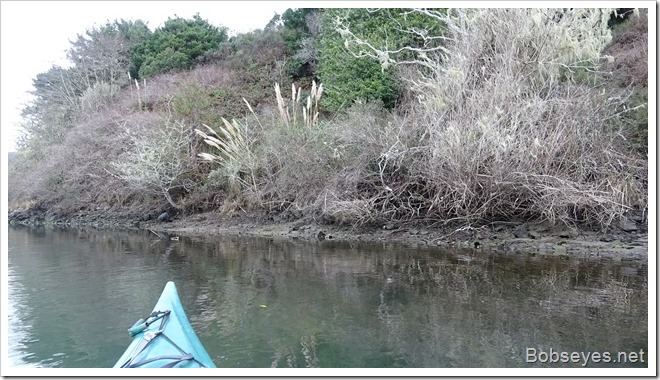 And another big fish splash

I continued on down and about another 100 feet ran into another big fish resting by the shoreline. When it detected me, it made a big splash and some muddy water and was gone.

That’s quite a lot of fish for me to see in one day down here, most times I’m lucky to see just one.

What this all means is the steelhead are running up the river to get to their spawning grounds.

I continued on down along the shoreline and headed on in for the day. 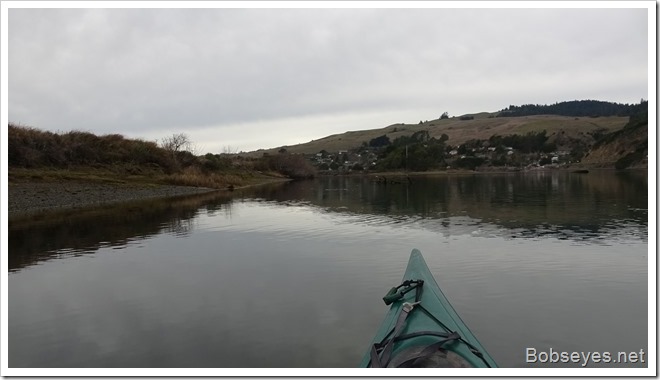 Once home it was still cool out. It was still overcast, so I got some firewood in for the night and that was it for me today.