At 8:30 AM this morning there was a knock at my door. My brother Tom said he thought I should know there’s big fires in Santa Rosa which is just over the mountain from us.

If the fires stay over there we are ok, but if they cross the Santa Rosa valley and get into these coastal ranges, we might be in some trouble, so I thought I better get it going.

I got a cup of coffee and looked on the internet to see what I could learn. From what I could tell, the fire seemed to be staying on the other side so, so far things looked good for us.

Once I got it going, I drove the short distance down the road to Ray’s house to see what he knew and if he wanted to go for a short ride up on a hilltop that overlooks Santa Rosa.

He didn’t know much more than I did and he didn’t have any phone or internet like I did.

So Ray and I hopped into my car and I drove up Sweet Water Springs road to the top. We were pretty sure the Santa Rosa valley would be socked in with smoke and it was.

Here’s Ray  trying to get his sell phone to work on the close by cell, but it would not get a signal.

Smoky for sure down there

We are looking down into the Santa Rosa valley which is a bit smoky. The Sonoma county airport is just down behind the big tree. Apparently the airport is socked in with smoke and also has no power so it’s hard to run a control tower. There are fire fighting air tankers at the airport, but they couldn’t get off. 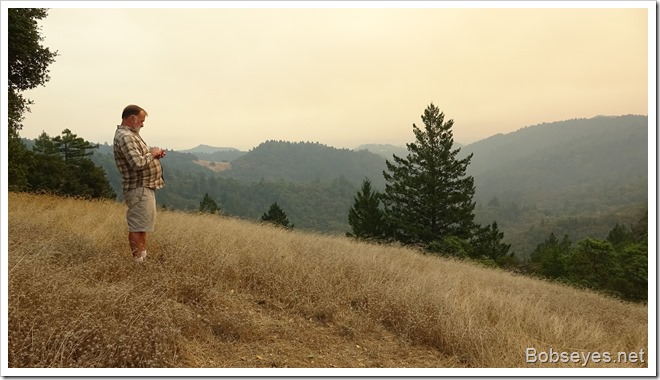 Gas stations are too busy for me

I took Ray back to his house and went to Guerneville to gas my car, but the darn stations were jammed with people gassing up just in case gas got hard to get, so I turned around and went on home for a nap as I hate lines of any kind and I didn’t really need any gas for my car for if for any reason I had to evacuate, I’d take my van so I had a place to live if I needed it.

Around two PM I decided to go kayaking which is what I was going to do today originally.

I went by the gas station again and it was still jammed which was ok as I should be able to get gas in Jenner. I figured I had at least enough gas to go down to Jenner and return home if need be without getting gas.

Looking for the dam guys

On the way down, I stopped at the Vacation Beach summer crossing as I thought I might find the dam guys working on some footings there, but I didn’t find anyone there. The summer dam is out but they haven’t taken the bridge or the road out yet. 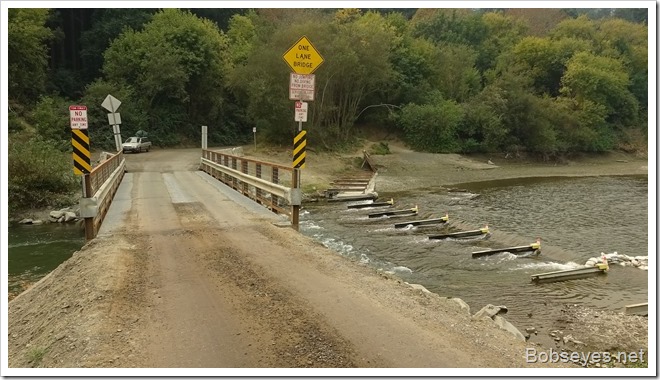 It was smoky at Jenner from the fires and I was surprised to find the Jenner gas station real busy too, so I went to the boat ramp and put my boat in the water. It was nice and calm and no one else on the water.

I headed on down to the mouth area to check out the mouth as the estuary water was high and the mouth might be closed again. 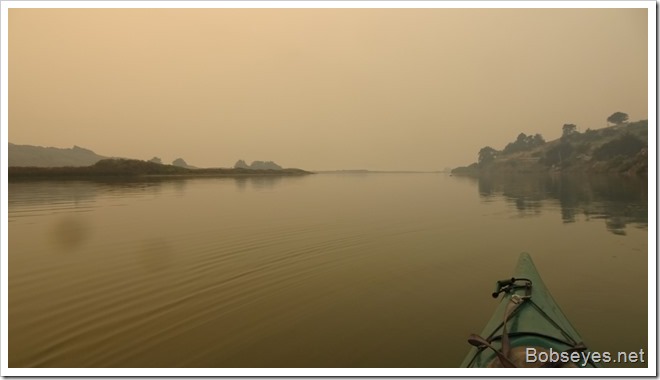 I stopped at the bottom end of Penny Island for a bit which looked like this looking down towards the mouth area. 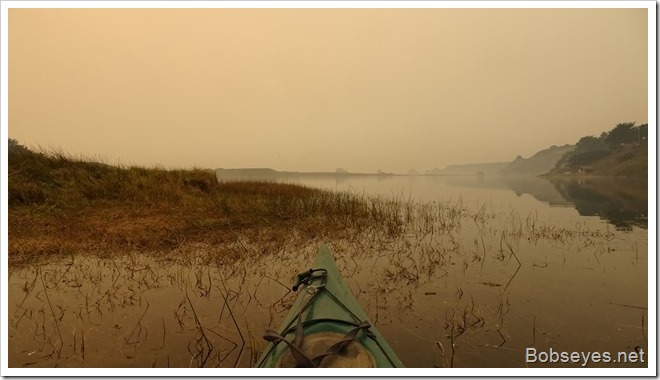 The smoke is similar go fog, but just a little different

I stopped here at the end of Penny Island and watched some harbor seals frolicking in front of me. I started my paddle across the river towards the mouth area to the right. 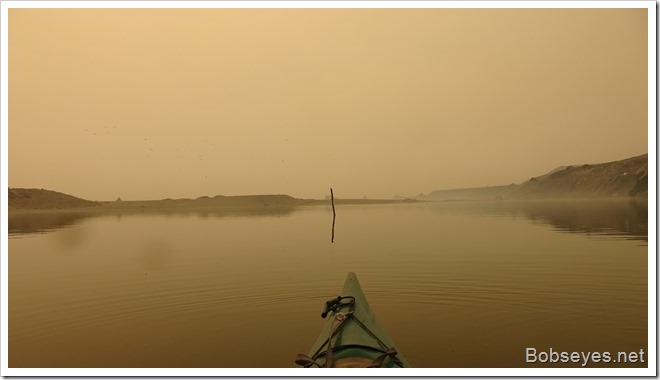 It was high tide at the ocean and one could hear the ocean’s waves crashing on the sandy beaches and splashing on the jetty rocks. Lots of birds resting down here too. 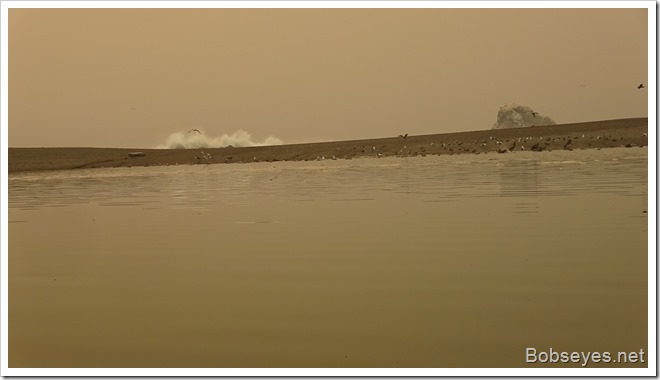 I  headed down river to where the river’s mouth should be, going by these harbor seals resting on the beach. 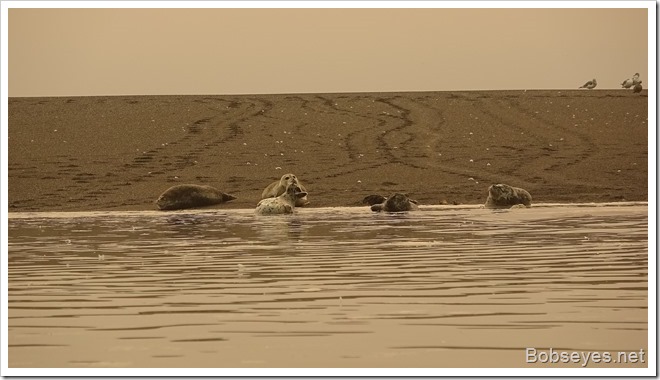 Mouth is closed up

The river’s mouth should be about here if it was open, but it was closed up, although large waves could still come over the sand and get into the estuary especially at high tide. 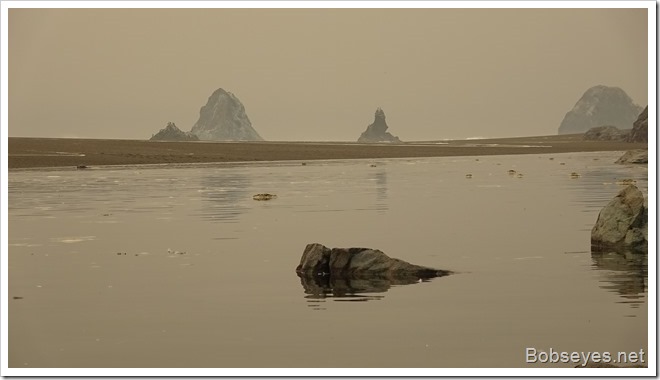 The sun was getting low in the sky as it was about five PM. I sat in this spot for a good while before turning and starting back. 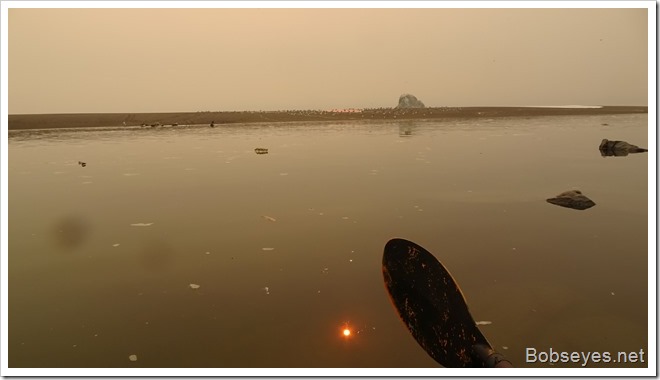 Here’s some of the resting birds I paddled by. Brown pelicans and some seagulls preening away. 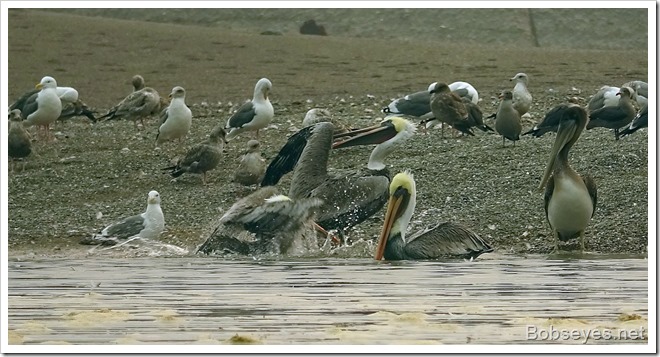 This was my view up river as I started back. The smoke gives everything a different look. 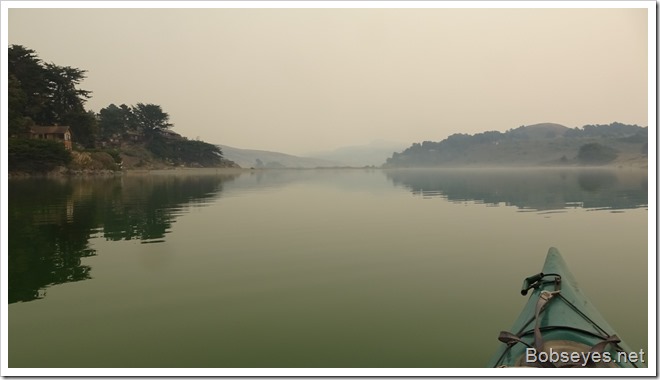 I saw John the trash picker upper guy sitting on the beach waiting for me to paddle by. We shot the bull for a bit before I continued on. 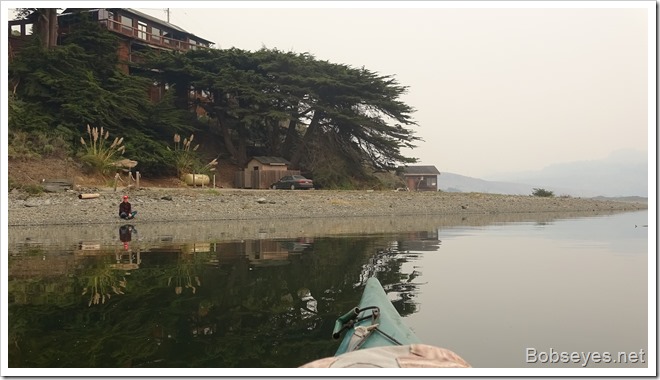 I paddled by these geese taking it easy in this spot. 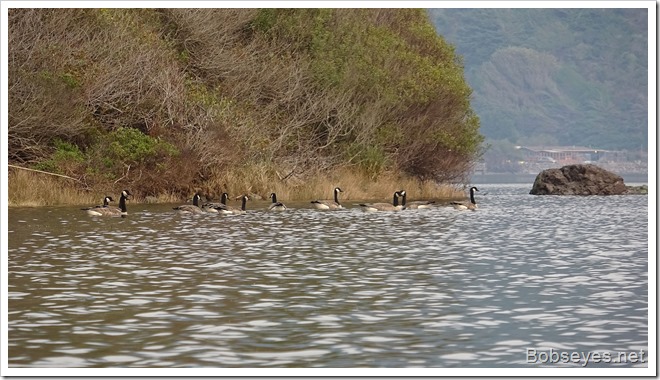 By now some of the smoke had cleared out and this is what if looked like as I approached the boat ramp to take out for the day. 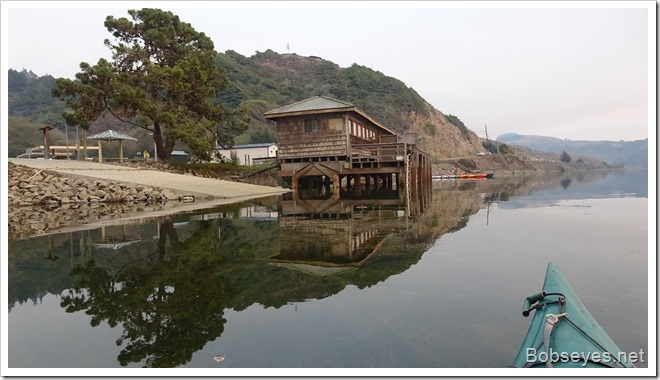 This is what it looked like as I went up to get my car. 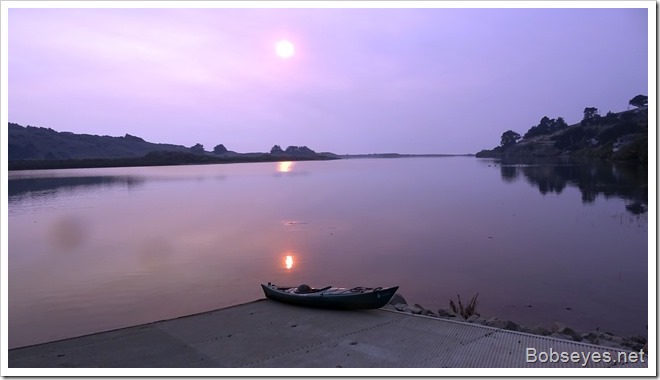 Heck with the Jenner gas station too

I put he boat on the car and drove over to the Jenner gas station that now wasn’t so busy, but.

They only had super which was ok, but when I tried to use my card it said to see the attendant for help. That’s it, I don’t need gas and drove on home for the day.

I noticed on the way home the sky was a lot smokier than this morning.