I had a long drive home the other day and made it just after dark safely.

The next day I took it easy and unloaded the van and napped a bit.

This morning I decided to go down to Jenner for a yak. I arrived around eleven and put my boat in the water. I talked with a a couple putting in at the ramp which I ran into later near the mouth.

I paddled across the river to Penny Island and sat here for a bit enjoying the day and deciding which way to go. It was high tide and the water level was up. It also looked like the river’s mouth might be closed for the first time this year so I decided to go down and check it out. 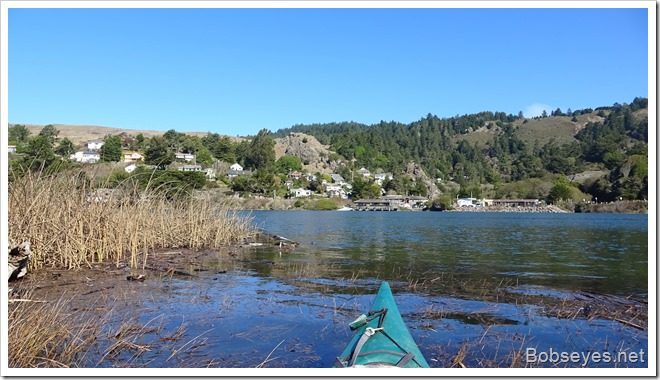 Paddling down along the island. 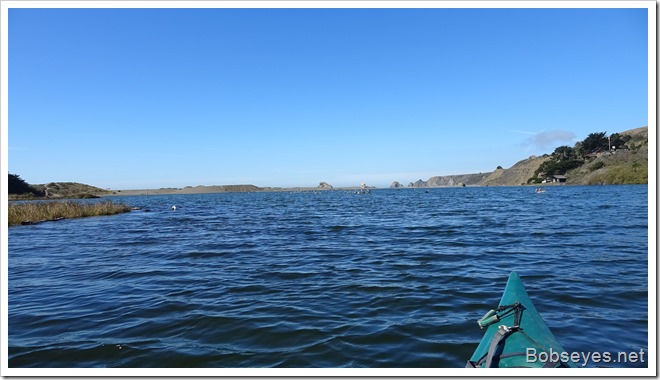 There were a bunch of brown pelicans fishing just off the island’s lower end so I stopped to watch for a bit. 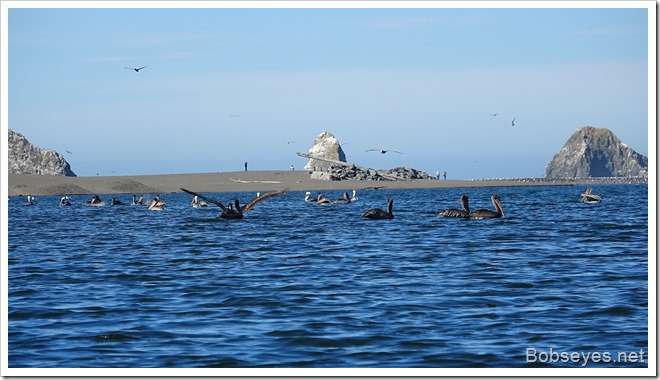 Here’s were I watched from in the grass on the bottom end of Penny Island. 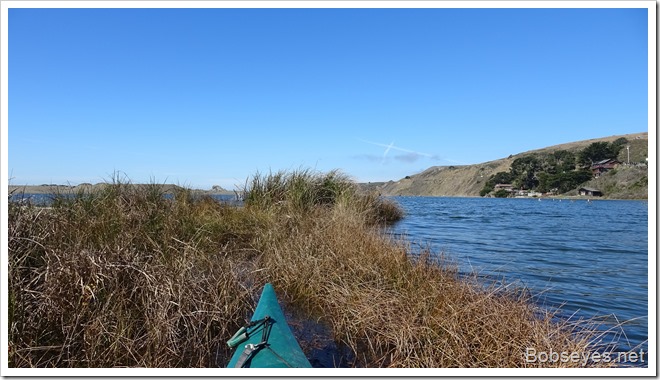 Eventually I paddled across here to the river’s mouth up ahead. 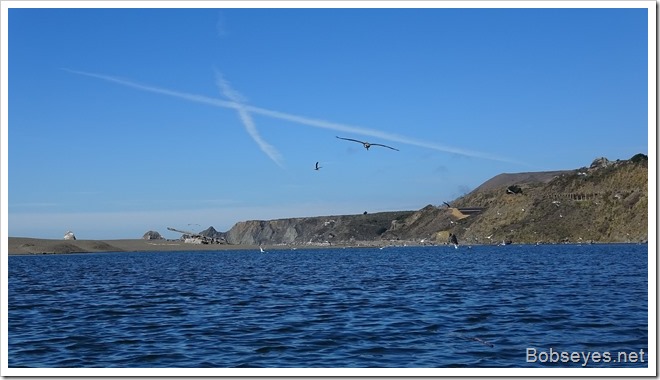 Mouth area can be dangerous

I paddled in here where the river’s mouth was and checked it out. Later I saw a huge wave come in that would of wiped out the people standing on the jetty. Lucky they had left. 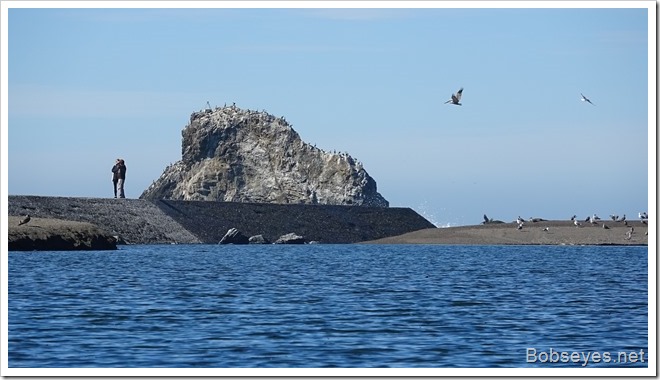 There were lots of birds resting on the beach there mostly pelicans and seagulls with a few other types mixed in. 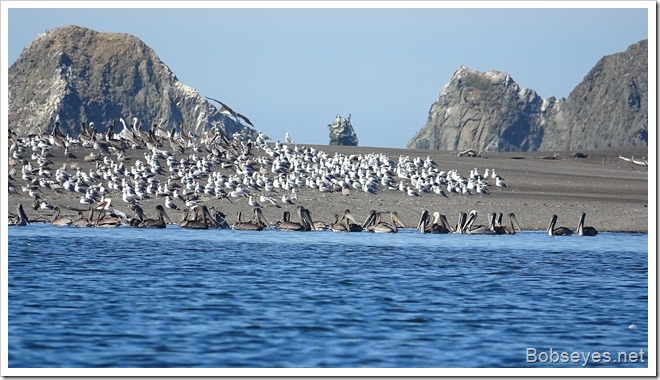 Checking out the jetty

The river turned out to be mostly closed, but there was a little water still going out just in back of the jetty by these rocks. 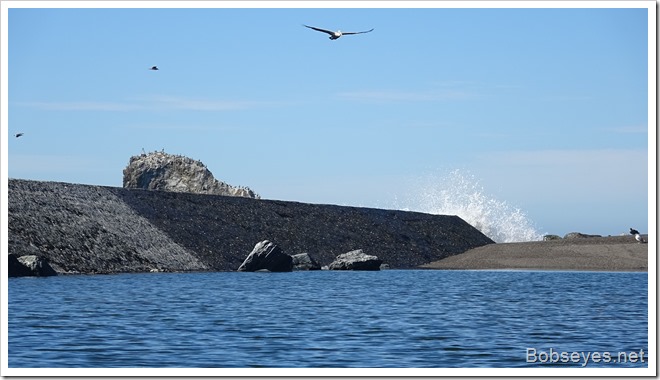 After I checked that out I paddled by these birds headed to the river’s end. 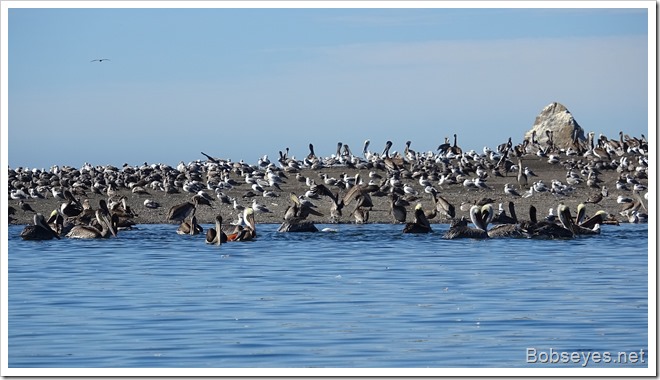 I headed down to Haystack Rock to sit for a spell. 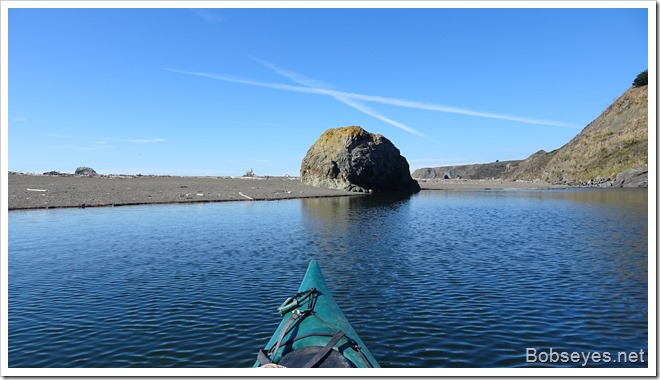 Haystack rock is usually a nice place to sit as the rock blocks the wind so I sat in my boat and enjoyed the day. 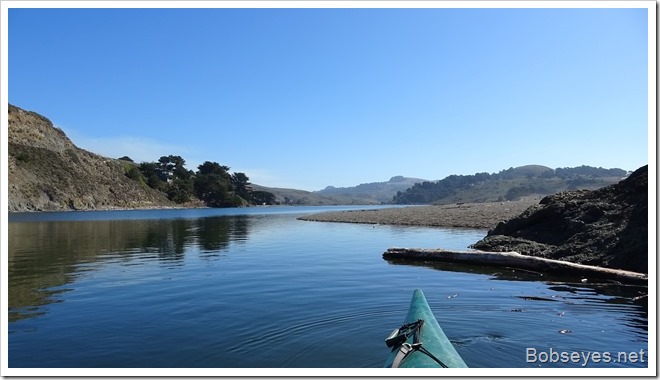 Eventually I started back up the river running into the people I talked with on the ramp and chatted for a bit then continued on past the river’s mouth. That huge wave I mentioned earlier splashed in over the cement jetty caused a lot of the birds to take flight. I missed the wave but you can see the jetty is all white from the foam of the wave. Anyone on the jetty at this time would have been wiped out. Luckily no one was on it at the time. It’s really a very dangerous place but most people don’t realize it. 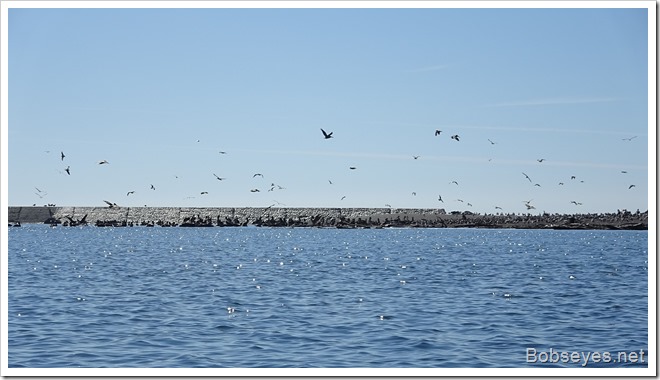 This was my view as I paddled by the jetty and up the river. 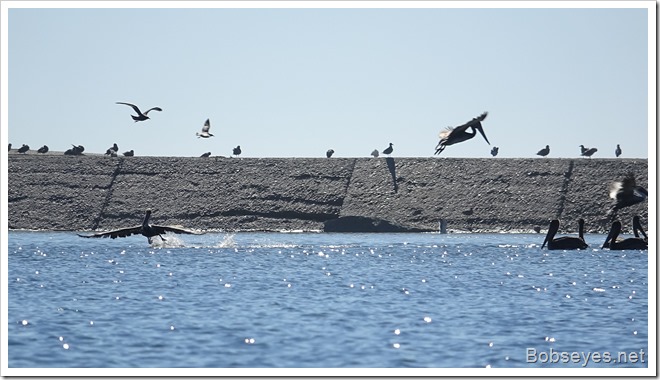 My route took me up the island’s back channel and I pulled into this little cannel on the upper end of Penny Island where I like to take a break and watched for about a half hour or so. 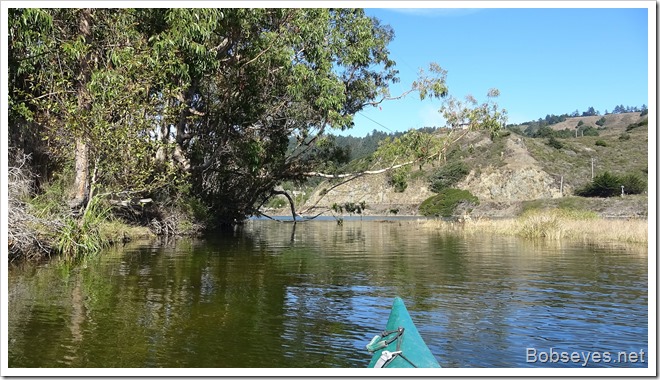 I hung around this area and watched and eventually went to the boat ramp and took my boat out of the water and headed for home.

I finally made it home for a nap and that was my day.