They opened the mouth

There was a light drizzle as I got it going this morning. Light  enough that I thought it might not be raining at Jenner so off I went. I could see the wind was up a bit when I drove into Jenner so I continued down to the river’s mouth overlook as I could also see that the mouth had been opened up likely yesterday.

Here’s the view of the open river’s mouth from the overlook. It looks like they opened it further south this time at the old jetty. A good idea I think as that’s where it usually goes out with this type of water flow. The mouth tends to open more to the north once the river’s flow picks up from the winter rains. 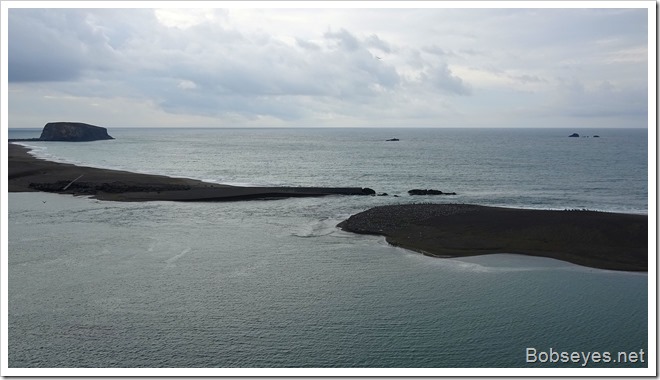 Lots of birds resting down there, here’s some brown pelicans and some seagulls. 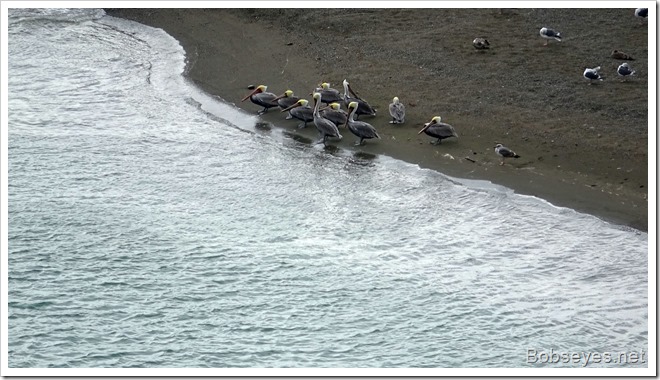 And of course there were a few harbor seals down there too. 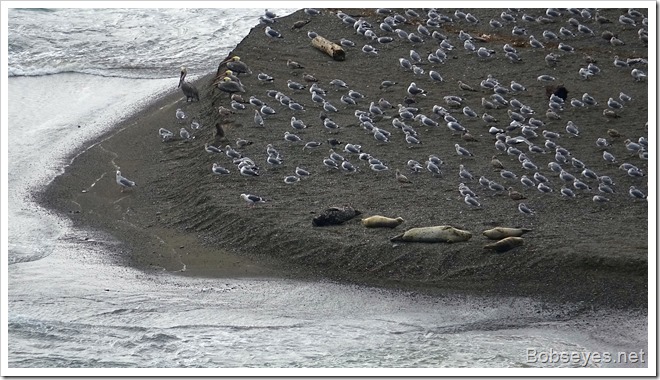 When I drove through Monte Rio this morning I could see the river was flat and it was a bit cool and choppy at Jenner so I decided to drive back to Monte Rio to kayak for the day.

I put the boat in the water and headed down river. Flat, eh. Check out the ducks coming to greet me. 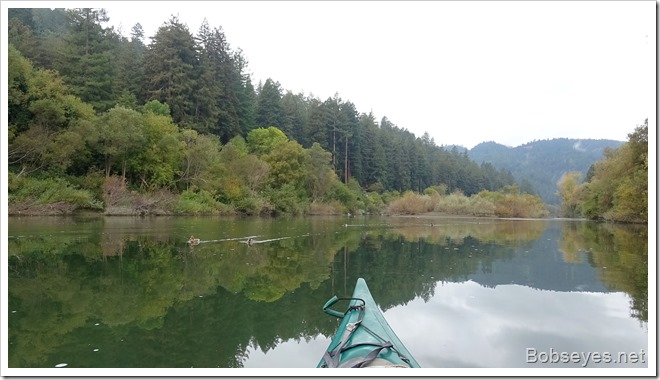 Monte Rio bird life is friendlier than most places

Most of the Monte Rio ducks are friendly even though they are wild. 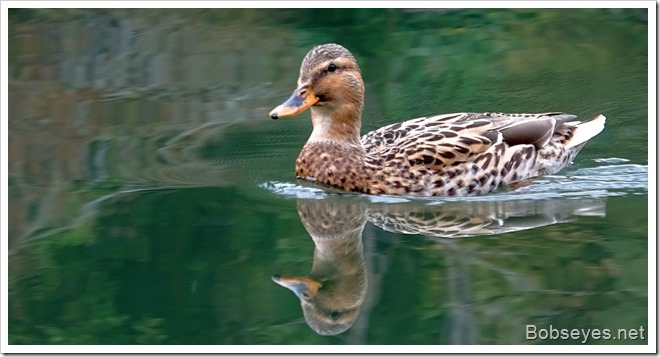 I paddled by these turkey vultures. There’s something by the one in the middle dead and has big teeth. 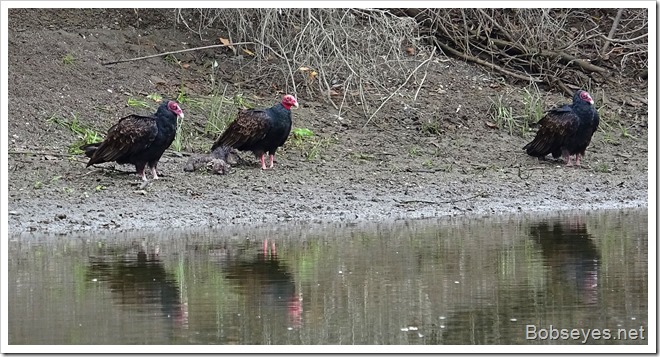 I went by this egret fishing in the weeds. It had it’s eye on me. 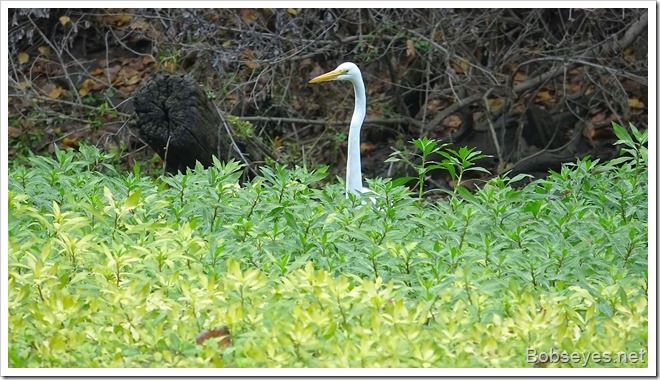 I’m not headed far today, only about a mile down the river to the Villa Grande hole just up ahead. 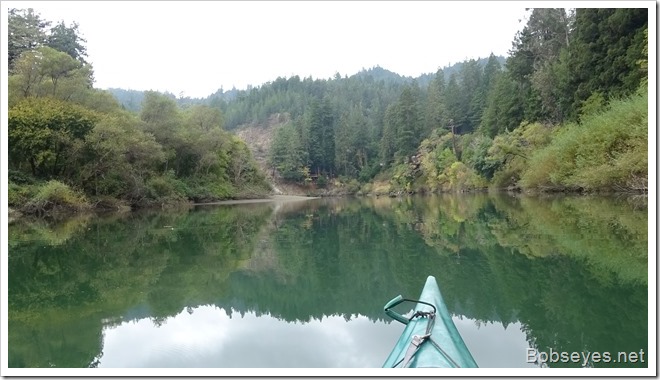 I pulled into this area, Villa Grande hole and sat around and watched for about an hour or so. 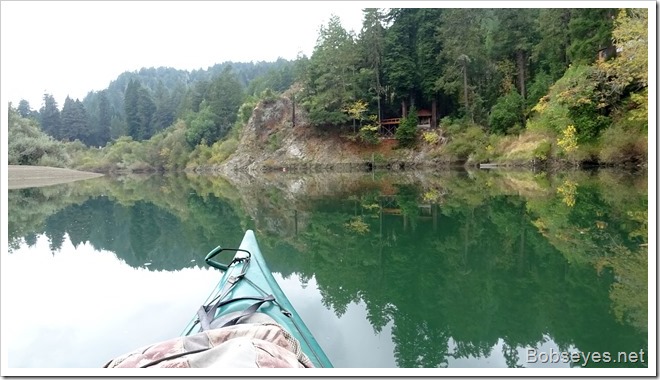 Here I am sitting in my boat at the Villa Grande hole, nice and peaceful. No one else but me on the water today. 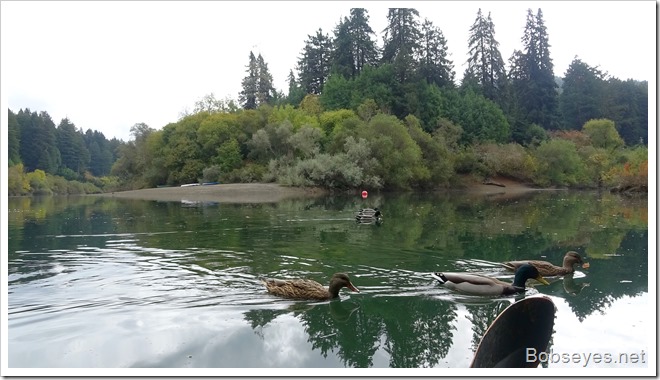 Seal on the hunt

Among other things one of the harbor seals popped up for a bit and I saw it in action a bit later.

Eventually I started back up the river when I spotted these big splashes along the shoreline. That’s the harbor seal on the hunt for big fish. I saw a lot of splashing, but didn’t see it get any big fish. 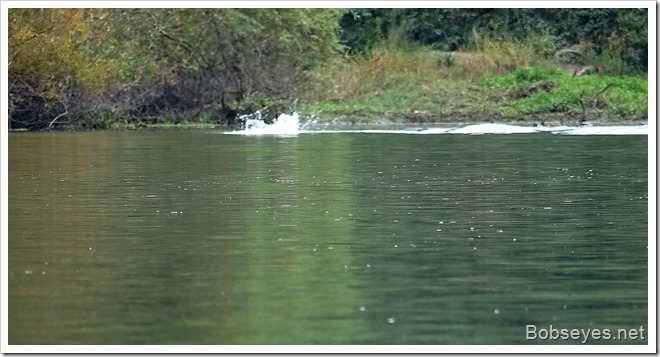 This great blue  heron was watching the seal hunt. 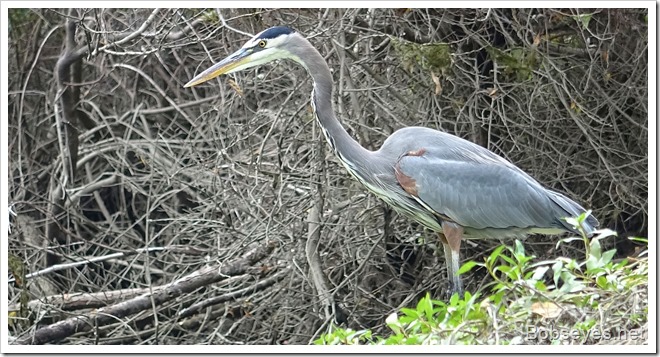 I’d hate to pay for this repair

They were working on repairing this river bank that eroded during some heavy rains last winter. The big machine is passing dirt to the smaller machine that is moving it off to the left. Sure looks like an expensive job. 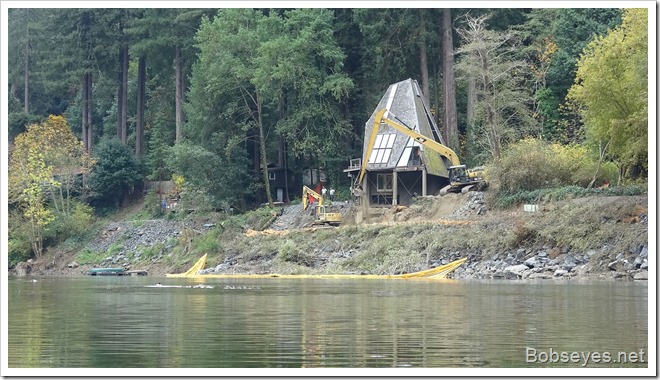 I paddled by this cormorant sitting on a submerged log. It had it’s eye on  me, but didn’t fly off even though  I was only about ten feet from it. 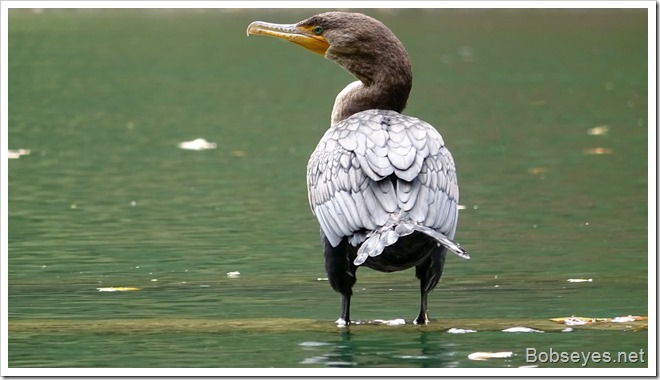 I wonder how many times I’ve taking this birds picture. I think it is an old man, but not sure. It hangs out in this area. 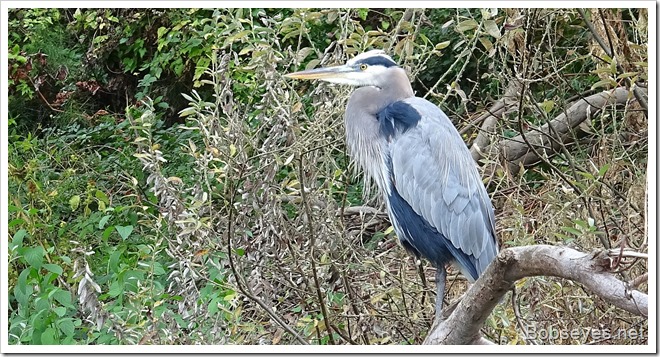 The vultures were working on whatever it was they were eating. It has big teeth and a pretty good tail. My guess is a river otter. 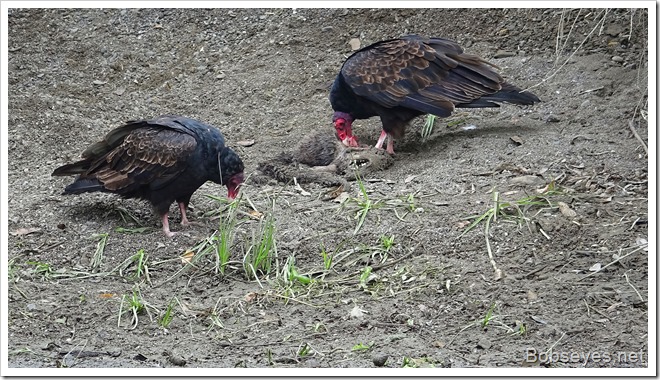 The boat ramp wasn’t far above where the vultures were so I was soon at the ramp taking my boat out of the water and putting it on the car top.

I went on home for a nap. A bit later in the day, I went over to my brother Tom’s and collected an assortment of vegetables to make a big pot of vegetable soup. I always seem to have more vegetables than will fit in the pot, so I made two pots, each one  just a bit different. I’ve been eating a lot of this lately which is good as it tastes good and I’m sure there is no corn type stuff in it, which is also good. Yummmm. :O)