Yakking to the rivers mouth

It looked like the sun was shining at Jenner this morning according to the weather guys so I headed on down there and arrived around 11.

The sun was out and there was a little wind but not bad as I put my boat in the water and crossed over to Penny Island and headed on down along this edge. 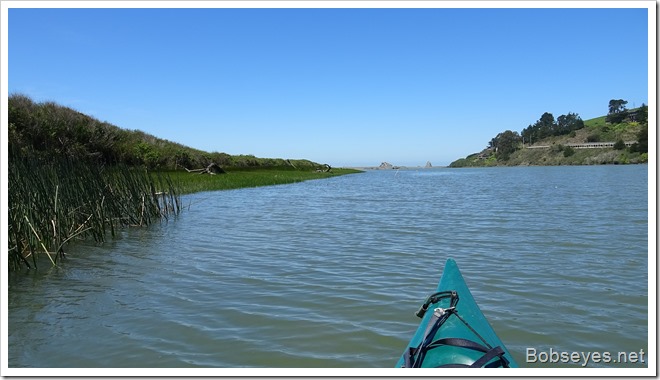 I stopped here and there along the way to check things out and take it easy. 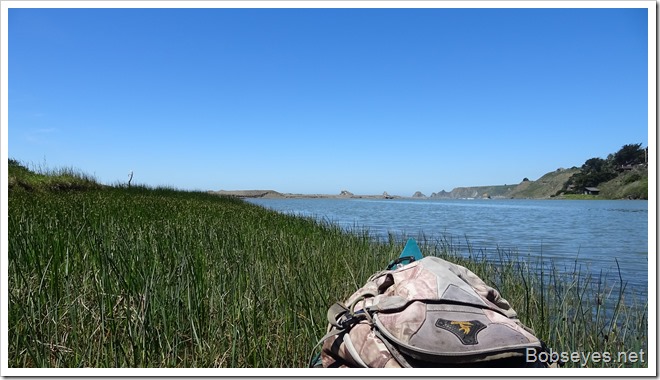 I paddled over behind that tree and sat for a bit. 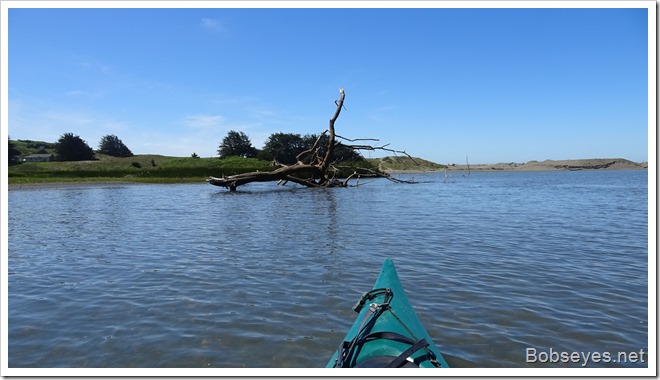 Then paddled across the river towards the river’s mouth area down that a way. 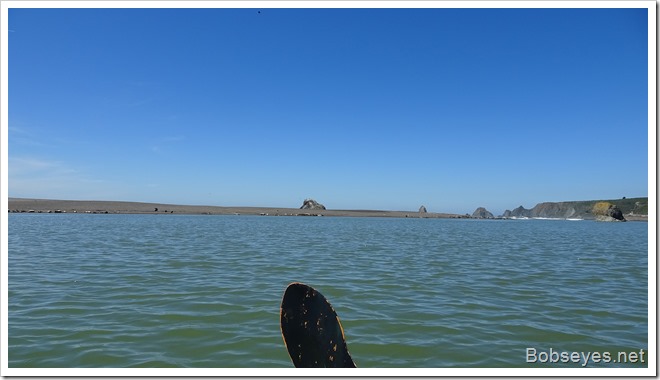 I could see lots of wild life down that way as I paddled along. 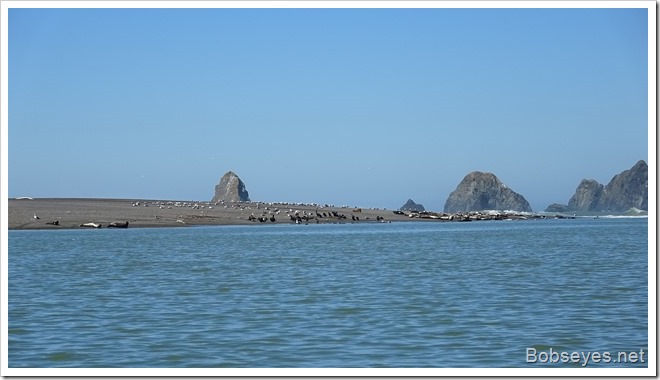 I went by these two seal pups taking it easy on the sand. 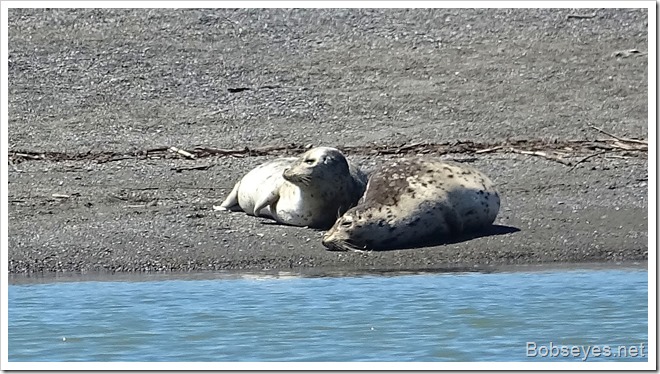 I was headed to the river’s open mouth where the river goes into the ocean just up ahead. 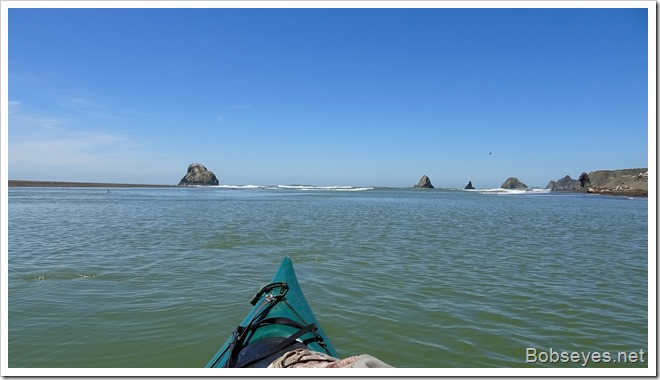 This rock called Haystack is a good place to sit behind as it’s calm there. See the goose up on top? 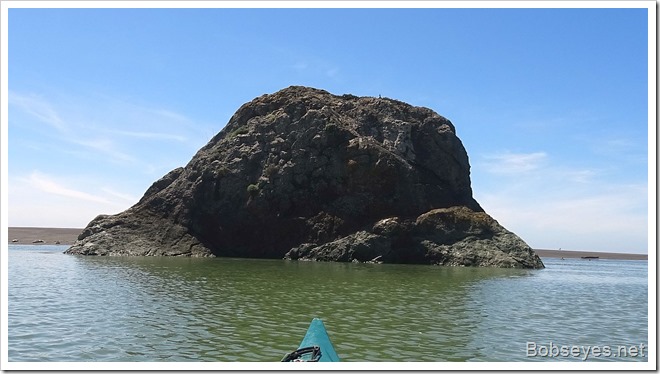 I’ll help you out. It might be nesting up there as I’ve seen them nest there before. 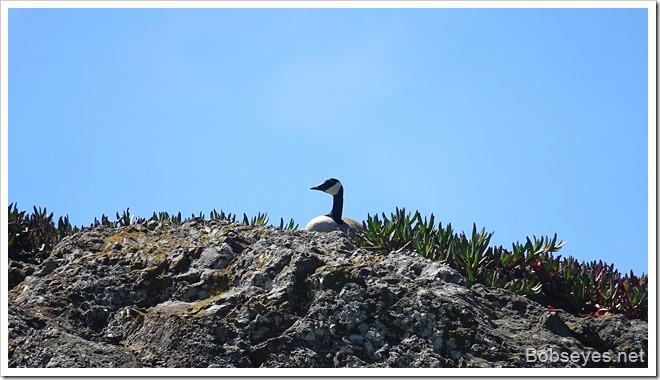 The ocean was fairly rough and lots of harbor seals were resting on the sand by the open mouth. 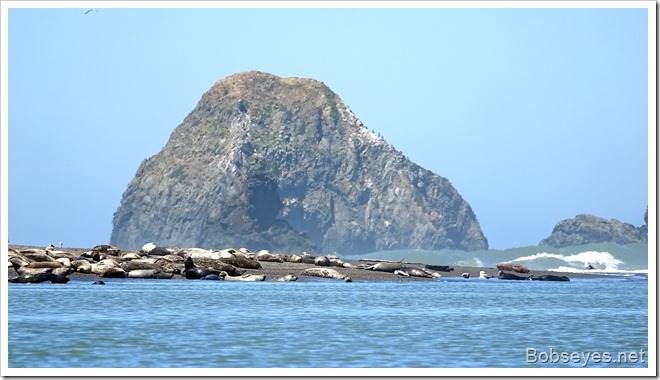 A few more resting seals looking into the ocean from the river. 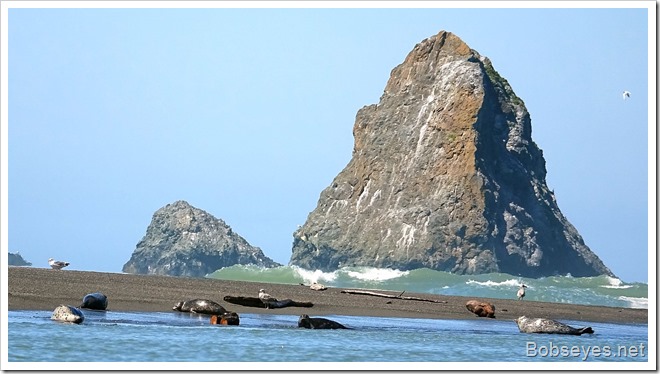 When the mouth is open at this spot and this time of year the waves are supposed to be the best so I wasn’t surprised to see some surfers out there. This guy just had a nice ride on that wave. There were a bunch more surfers a little further out in the ocean just out of sight. 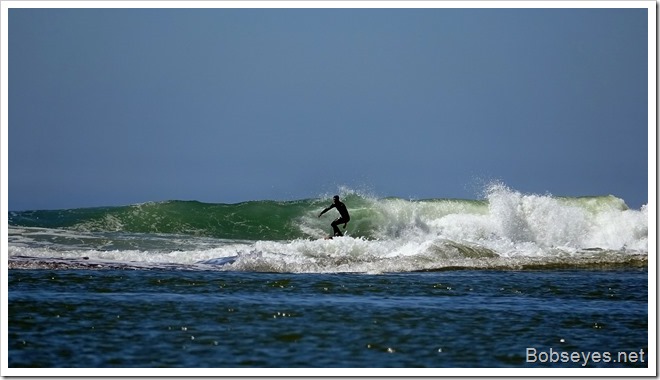 I hung around for awhile just taking it easy and watching things.

This pair of ravens was eating something on the shore by me. 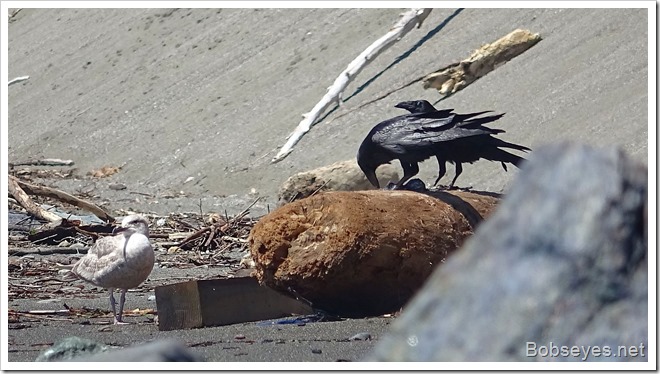 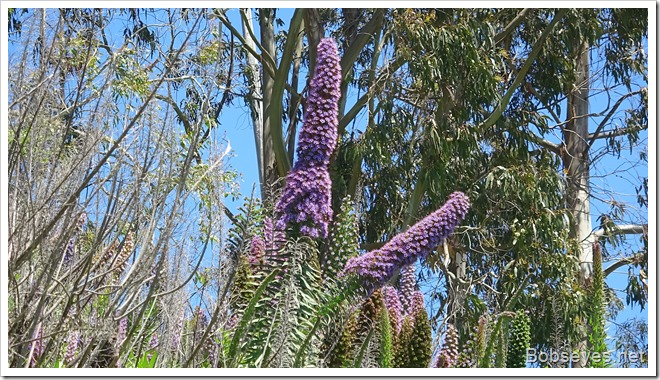 I paddled over to Penny Island and up the back channel. When I got to the upper end of the channel I pulled into the island for a break than headed on in to the boat ramp for the day.

I put the boat on the car and drove on home. I noticed a grinding sound from my right rear wheel as I was driving. I’ve heard the noise before as it comes and goes but it’s been more on the comes side lately so I’m thinking it might be a rear wheel bearing going out and I need to check it out so that was on my list of things to do when I got home after a nap.

Checking out the car noise

I jacked up the rear wheels of the car and got under there and started wiggling things around. I couldn’t get the wheel bearing to make any noise but I detected the right rear axle was a bit loose inside and was likely making that noise. I think the insides were a bit worm but now that I know what it is no worry as those things make a lot of noise before they really have to be replaced. I’ll be keeping an ear on it just the same.

I also did some more gardening digging up another grow pen and did some cutting back of some wild blackberry vines, a continuing task as they grow like mad around here.

While collecting the chicken eggs today I noticed one of them was broken in one of the nesting boxes. At least one of my chickens seems to be eating the eggs by peaking them and breaking them in the nest.

I have a video cam on the nesting boxes but I have about nine chickens that look mostly alike so tonight I put some leg bands on those chickens using tie wraps and some black marker ink. I did this just as they were coming in to roost and it went pretty well without them bitching too much. Who ever is eating those eggs will be in the stew pot soon. :O)