Russian River Mouth Open’s Itself Up

Off to yak for the day

I’ve been working too hard so the best way to ensure I take it easy is to drive on down to Jenner to kayak for the day.

I unloaded my boat and parked the car. On the way past the visitor center I noticed a paper tacked to the wall blowing in the wind so I went over to see what it said.

River’s mouth will be breached tomorrow

Just as I thought it said the Sonoma County Water Agency was going to open the closed river’s mouth tomorrow, Wednesday.

I jumped in my boat and started across the river checking the water level gauge on the deck of the visitors center. It read about 8 and a half feet. They open the mouth around nine feet, the height of this deck. 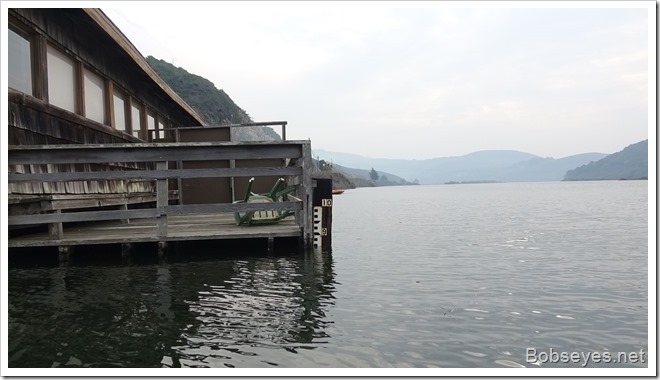 Paddling onto the flooded island

Since they were going to open the mouth tomorrow I thought I should head down that way and have a look, so I paddled down along Penny Island and since the island was mostly flooded at this level I paddled into the island to have a look. 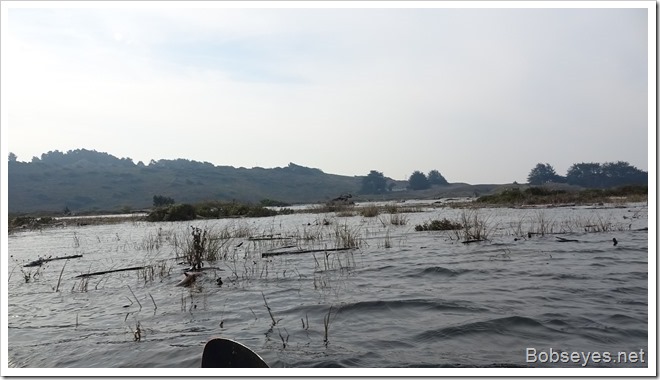 From the flooded island looking out towards the mouth area looked like this. 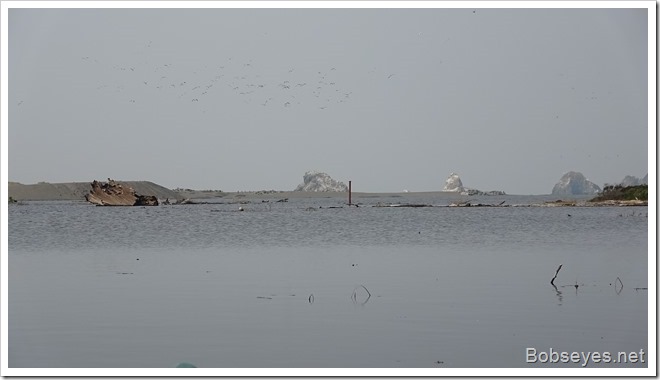 I pulled in beside this old redwood log to get out of the wind for a bit. 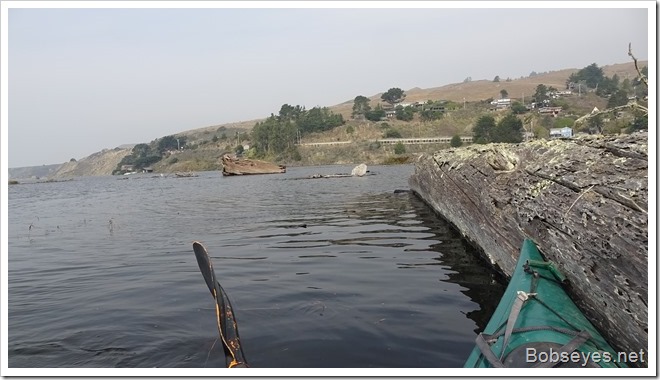 Headed to the closed mouth area

Eventually I paddled out to the side of the island and had a look across where I was going to paddle down to the mouth area out there. 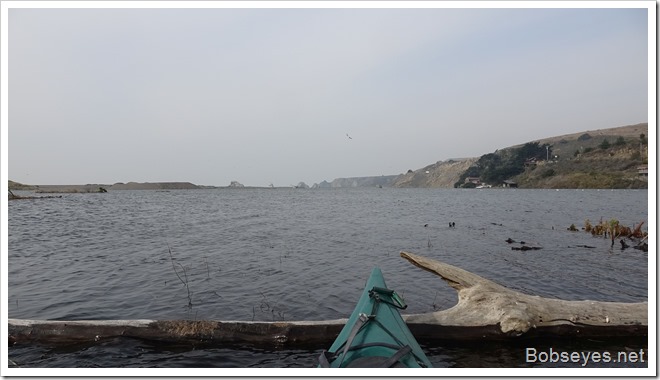 I was surprised to find the river’s mouth almost open in this spot. 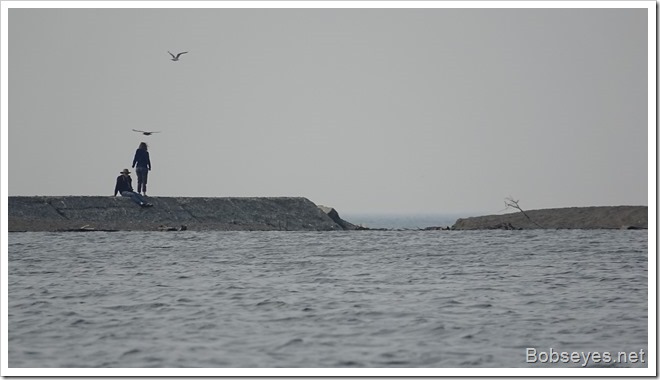 I looked around a bit and decided the guys will have a hard time getting by the jetty at this point as there’s no sand where my boat is and this is where they usually take the excavator to open up the mouth. 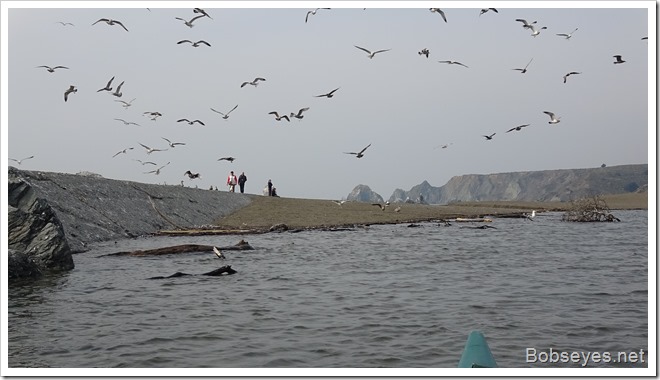 Having a closer look at the mouth I could see it could be opened with a couple shovels if it stayed closed that long as I suspected it might open itself just about any time and was likely going to open before they opened it tomorrow. 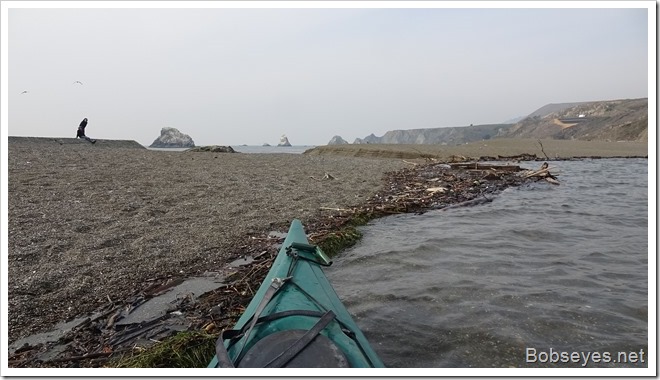 Staying out of trouble

Here I am sitting right in front of where it was going to open. I could of got out and helped it out just moving some of that wood out of the way but then I might get into some kind of trouble so I didn’t. 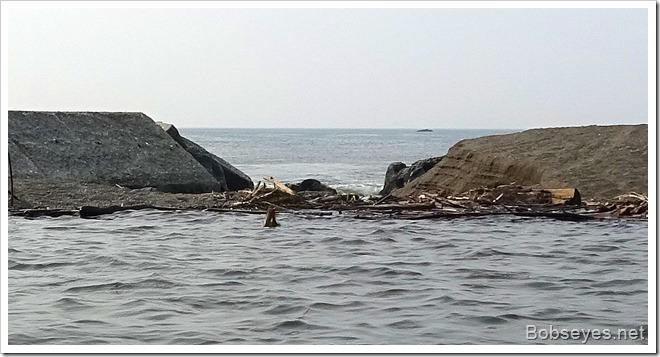 I hung around the area for about an hour just watching things and waiting to see if the mouth was going to open itself up as it sure looked like it might be in the process.

But like watched pots never boil or take a long time to boil I finally paddled back over to the island and sat around on it for a bit more as I was looking for otters which like to rest on the big logs in this spot. I’d seen an otter briefly down by the jetty earlier so I thought maybe there might be some here, but nope.

Paddling onto the flooded island. 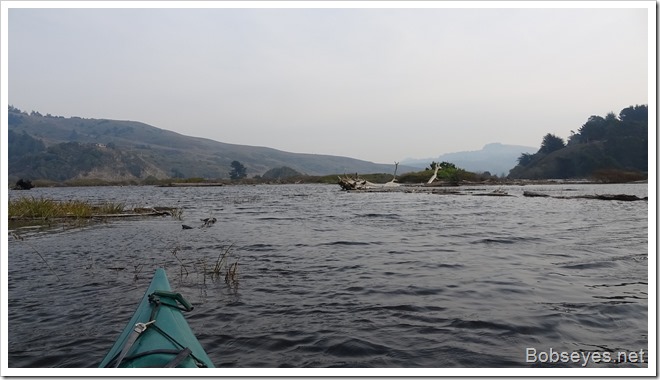 Eventually I paddled up along Penny Island to it’s upper end and hung out for a bit in this spot. 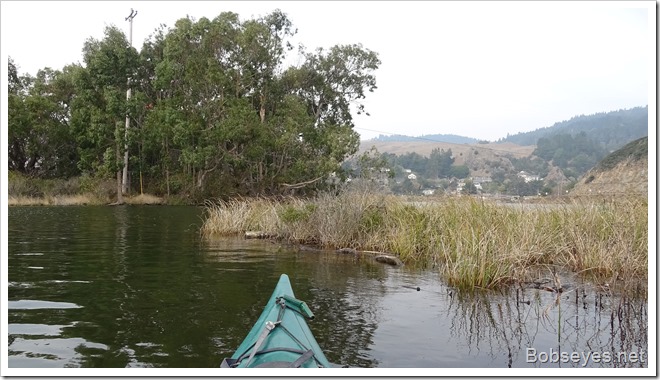 From there I headed to the boat ramp and went in for the day.

Drove down to look at the mouth

Now I was pretty sure the river’s mouth was in the opening process so I drove on down to the highway 1 overlook to check it out and this was the view from there and yes the mouth had just opened up.

From the overlook, looking over the river and out into the Pacific ocean. 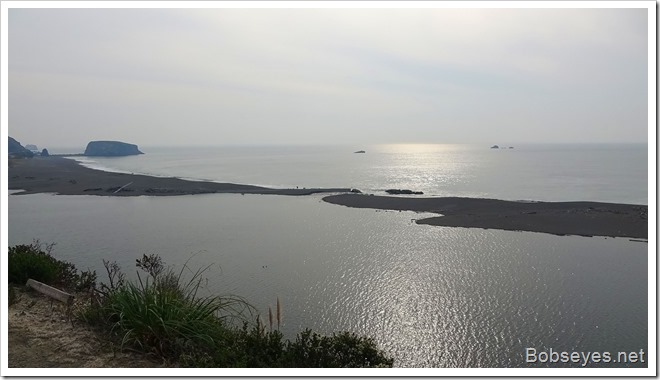 I could see the river’s mouth had indeed opened up and was still getting bigger as I watched. 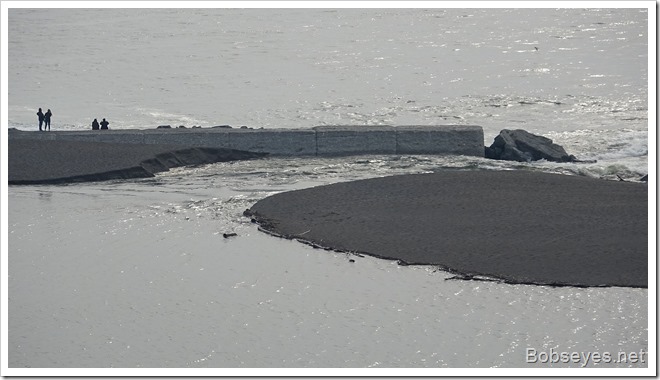 That should save the water company twenty thousand bucks or so.

From there I drove on back to Monte Rio and stopped in to visit Charlie for a bit as he had some wire fencing he said I could have.

We had to drag the wire fence up the hill to my car with his quad runner and it just barely was going to fit into the back of my care but we got it.

We sat around and shot the bull for about an hour then I went on home. Once home I unloaded the wire and rolled it out to see if I had enough to complete the job. I only had fifty feet so I will have to go to the store to buy another roll. But having that extra wire means I can make another chicken pen or just use it to divide this big one up making it into two pens so I have more control. It means I can grow stuff in one while they can feed in the other half which actually works out better than just one big pen.

By this time the day was coming to an end so that was it for me today for a nice one.

1 Response to Russian River Mouth Open’s Itself Up