Rough Road Video, Raspberries and a Water Crossing Repair In the Forest

I took a few video clips of the Battle Creek Road in one of the roughest spots. It’s a short one but shows just what we took the vans through on the recent trip.

My neighbor picked herself a bunch of raspberries the other day. The birds got the first crop in the spring but now they are leaving them alone. 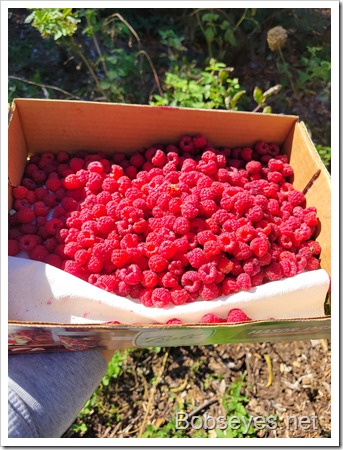 I was checking the air in the quad tires when I found that I’d installed them backwards the last time I changed the tires and the air valves were on the back so I had to remove the wheels and turn them around. While doing that I lost one of the lug nuts and looked an looked for it as it should be on the ground where the others were, but no go, even though I looked several times. I put it back together without it as three would hold it instead of four until I found the lost nut which I figured I would eventually. As it was I was going outside at night with a light and went I went by the place .the nut caught the light and I found it right where it should have been. 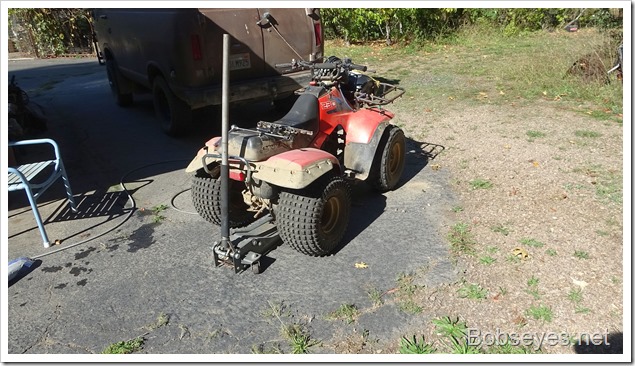 I rode the quad runner up into the hills as I wanted to bring the trail tools home after the work and it’s too hard to take them on the dirt bike.

On the way I spiced this mushroom on the road. It’s from the Amanita family and is the only one we pick in the family because it is edible and very good.
A lot of the others in the family are highly poisonous. This one is about five inches across the top. 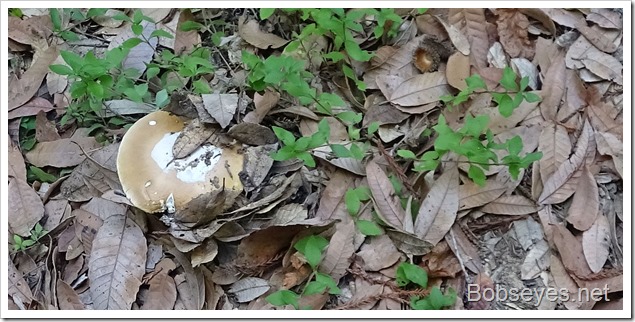 I continued riding on up this road to the work area, about a mile up the hill. 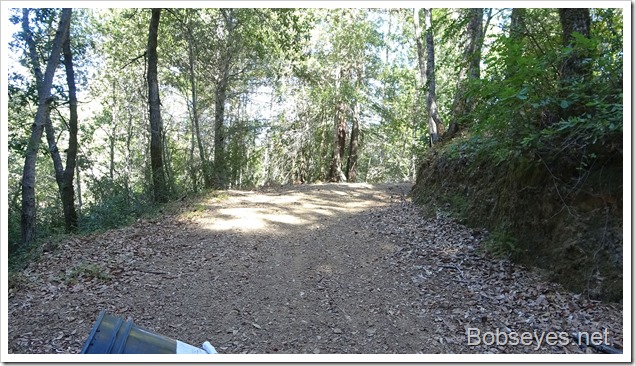 When I built this rock dam the other day I made it too narrow and sharp to get the quad runner across, so I needed to fix that mistake. by widening the trail out. 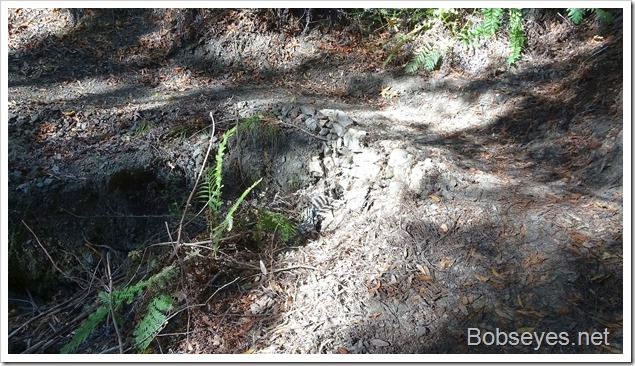 I decided to fix all the erosion in this water crossing and moved the rock dam quite a bit which meant I had to move all the rocks to the new spot. I though them all down to the new spot and began to construct the new rock dam. 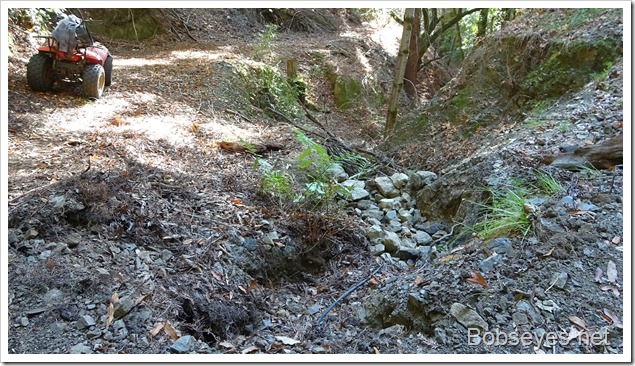 I need to fill the area in front of the dam with gravel  which was plentiful on the trail, I just had to shovel it into the spot. 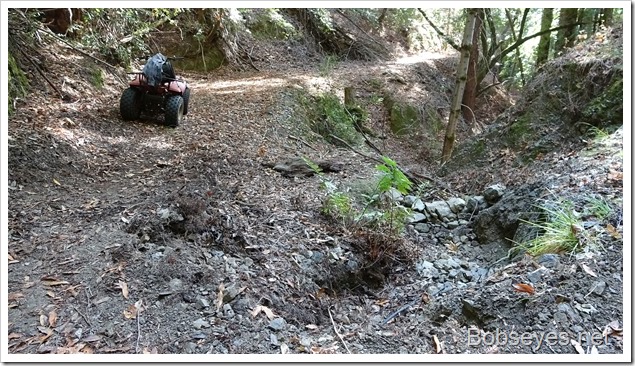 I got it this far and decided to finish the whole thing off by filling the whole ditch in. 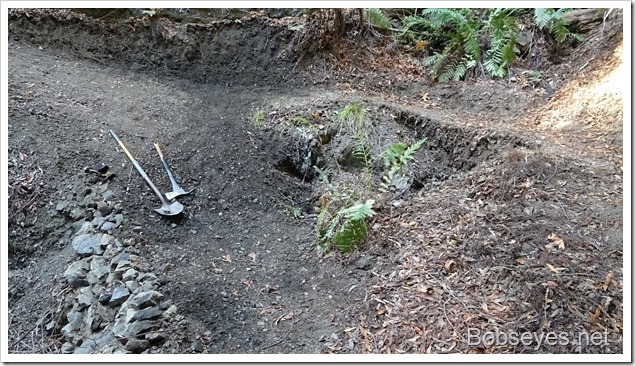 I shoveled enough rock into the ditch to fill it up and repair all the erosion so now it looks good and should do the job and I loaded my tools up and headed for home. 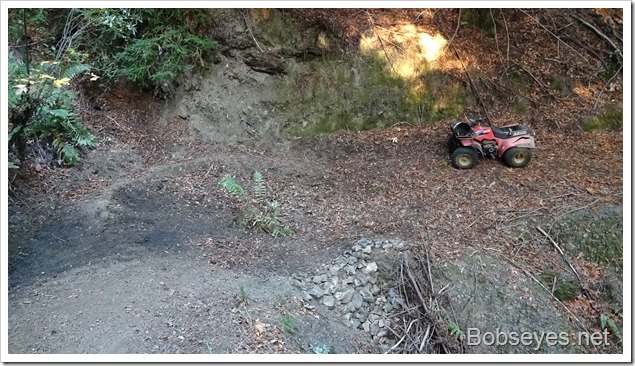 I stopped here on the main road and put a small ditch across the road so the water can drain off the road instead of washing a ditch down the road when it rains hard. 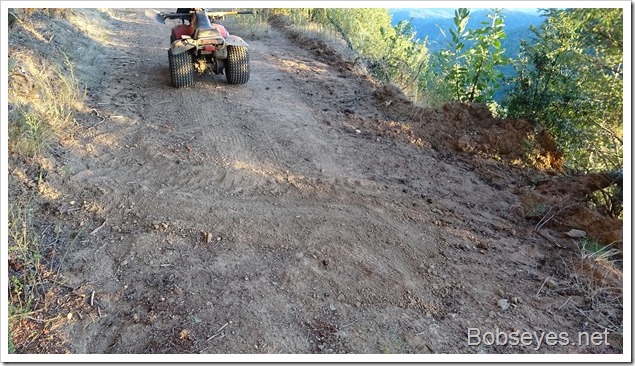 I rode on down this road. 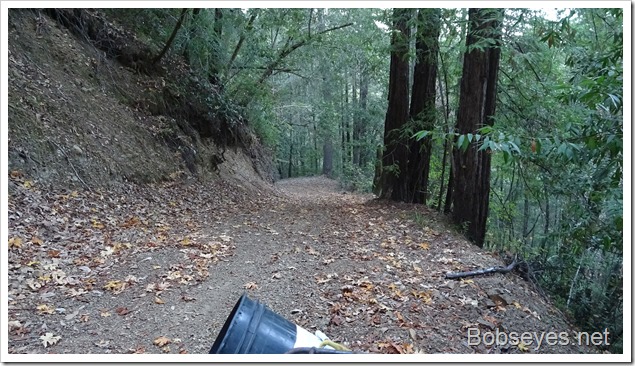 And stopped at this water crossing where I had constructed another rock dam to repair this crossing. Looks good, just needs some hard rains to fill in the ditch. 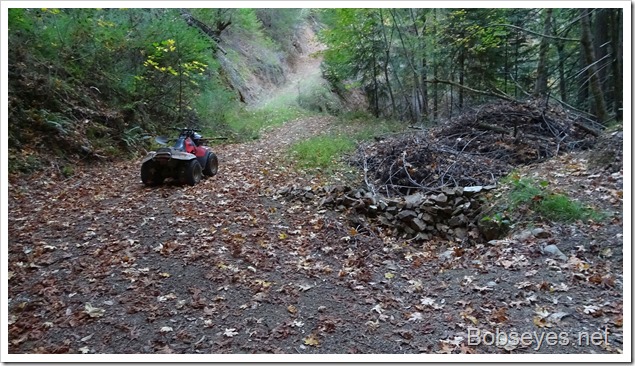 (Visited 120 times, 1 visits today)
This entry was posted in Uncategorized and tagged fresh raspberries, trail work in the forest. Bookmark the permalink.

1 Response to Rough Road Video, Raspberries and a Water Crossing Repair In the Forest