A Sunday paddle at Jenner

I’ll start with Sunday as I was too tired out to do the blog after my yak at Jenner that day.

Around noon on Sunday I decided it might be a good time to go down to Jenner for a  yak. With the overcast weather and the recent rains causing the river to rise I figured there just might not be a  lot of people down there. Most people go in the morning to avoid the afternoon winds so noon was a good time to go especially since the winds would be low today, at least I hoped it was going to be so and it was.

I put my boat in the water and parked the car and headed across the river to the island.

On the way crossing over I could see the ocean was real rough with waves washing over the sandy beaches. 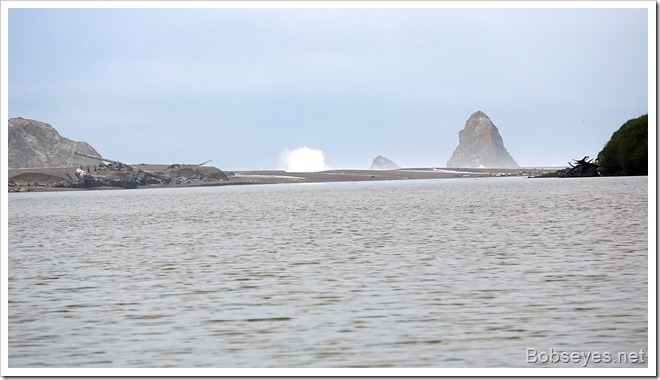 So that looked like a good way to go today so I paddled down along the edge of Penny Island. 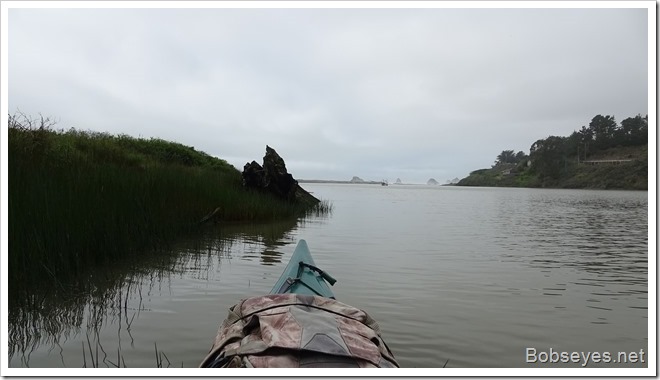 When I got to the lower end of the island I looked around the area to see what I could see and I saw this big bird sitting on a log close by. I think it is an immature bald headed eagle taking a break. 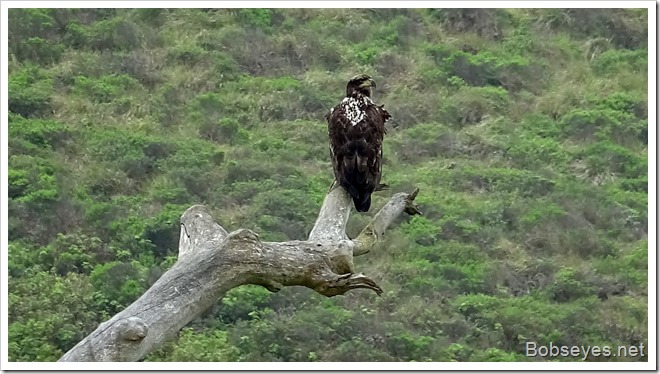 Heading to the ocean

I sat at the lower end of the island looking around for a bit then started my paddle across the river towards the river’s mouth area. You can see the ocean is breaking over the beaches up ahead so the ocean is fairly rough today and was making a lot of pounding noises as the water beat against the shoreline. 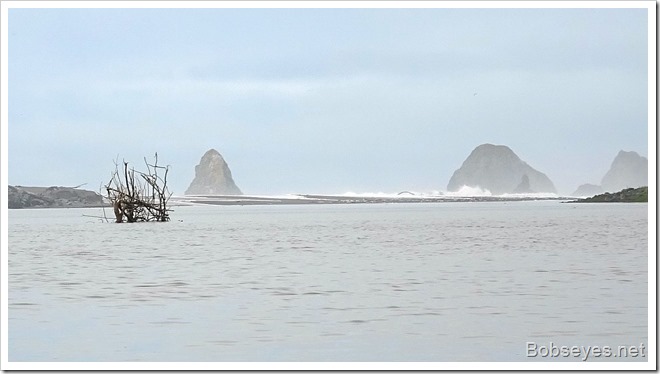 I’m moving in closer to the sandy beaches. 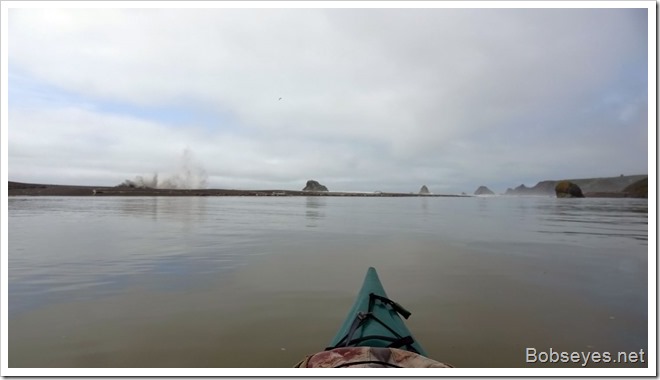 A few of the harbor seals resting on the sandy beach with a wave breaking over the old jetty. 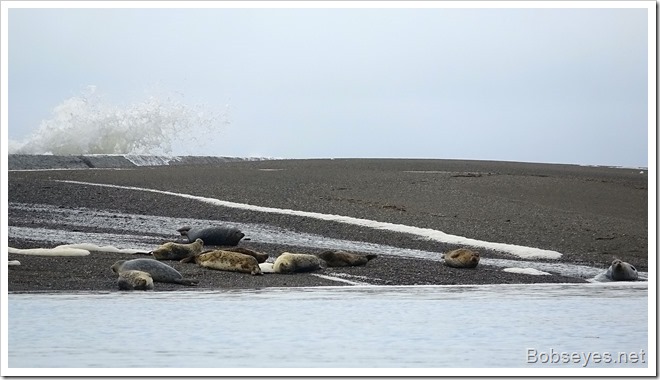 I worked my way north towards the open river’s mouth area and looked on out into the ocean but didn’t get too close. 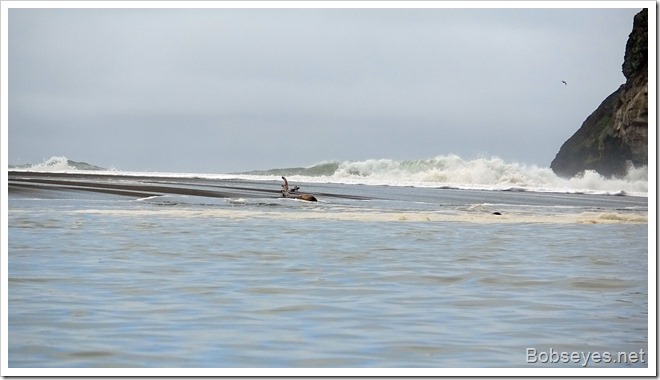 After a bit I started working my way back along the shoreline going by these harbor seals. 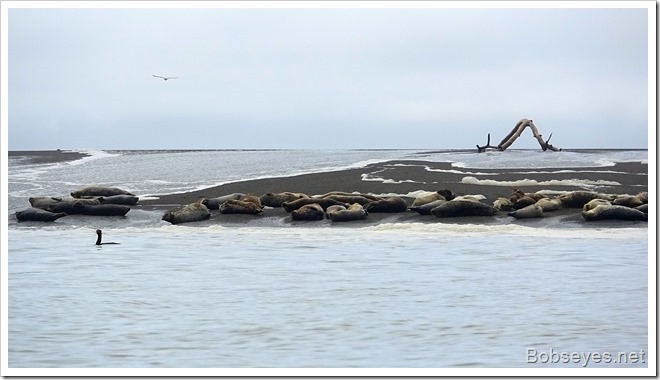 I paddled on over to the Penny island back channel and paddled on up it along here heading up the river. 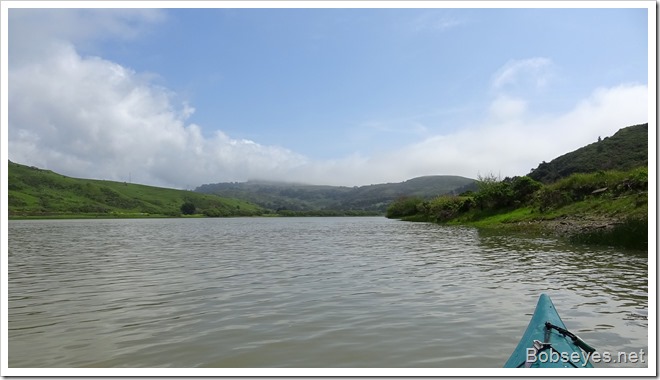 I stopped here and there along the way just to watch and enjoy. 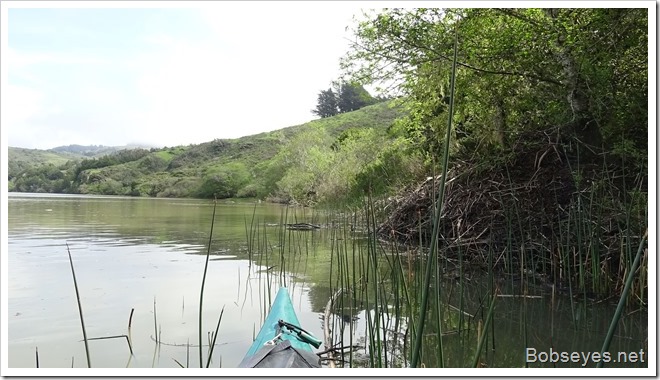 This is as far I as I went to what I call Muskrat as there’s a bunch of muskrat nests in the bushes here and it’s a nice spot usually out of the wind. 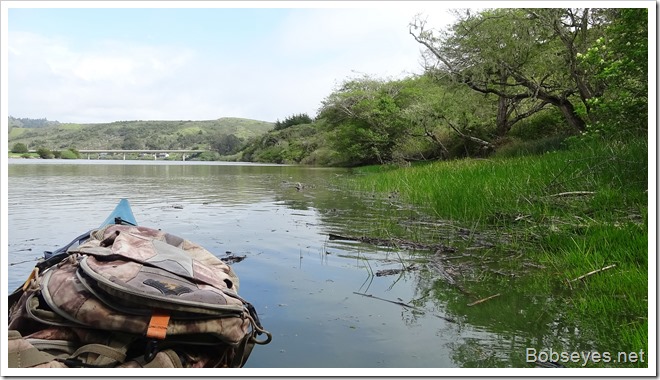 After a good long break there I crossed the river to where these cattle were taking it easy. 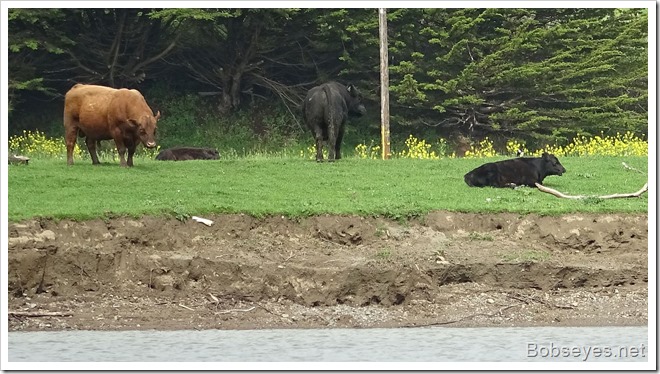 I continued on down the river along the edge looking for wildlife and went by these cormorants resting up on Paddy’s rock. 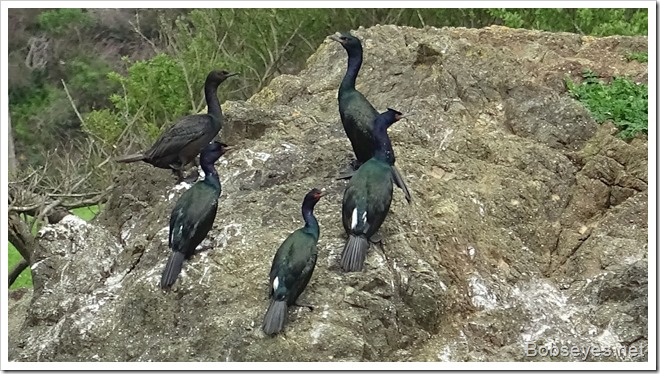 There were a few cormorants on the gravel there too and a pair of mallard ducks. 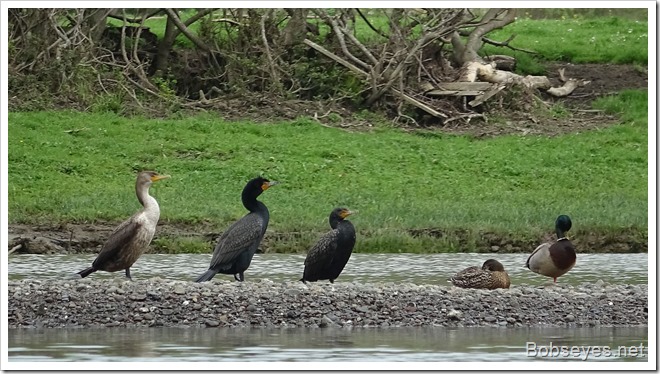 It wasn’t long before I drifted back down to Jenner where I paddled across to the boat ramp and went on home for the day. 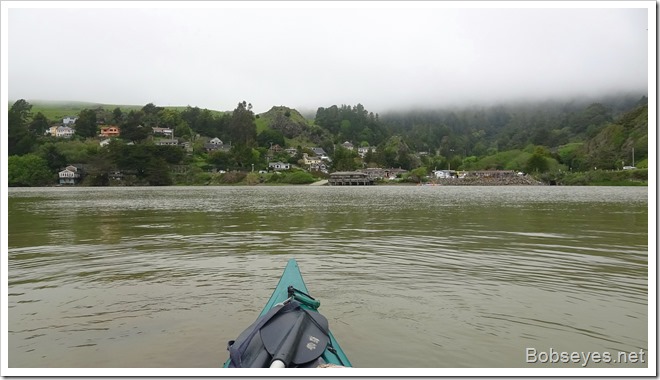 Finished the day with a nap

Nice day paddling on the river but when I got home a nap was about all I had left in me so that’s what I did.

That night when I was gathering the chicken eggs I found a hen still in one of the laying boxes on a bunch of eggs.

I think that means she is broody or wanting to nest so later in the night I came out and moved the eggs she was on and her into a box so she can nest in peace and not block the other chickens from the laying boxes.

She wasn’t much trouble getting her into the box and she seems to be sitting on the eggs. It takes about 21 days to hatch them once they start sitting on them so maybe we’ll have some little peeps if all goes well.

She’s sitting on a combination of mostly other birds eggs so I have no idea what might be hatched out.

Here’s her nesting box all to herself low to the ground so peeps will be able to get in and out and also hide under the box from larger birds. 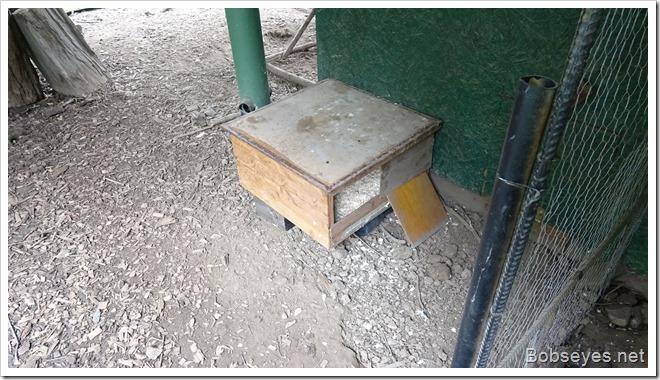 This broody hen stuff is all new to me so I’ll just have to learn with the chickens to see how it all goes.

It rained lightly today, Monday so I puttered around the yard and mostly took it easy doing some planning on future projects. Seems I always have projects. :O)

I also put the battery chargers on my quad battery and my Toyota battery as I haven’t been using them enough to keep their batteries charged up and with the high price of batteries these days I thought it would be a good idea. :O)