My plan today among other things was to finish prepping the van for a little trip I’m going on tomorrow. I started to put stuff in right away and did so on and off for the rest of the day.

The little peeps were in the mulch pen when I went out to check on the chickens today.

Here’s some of them. 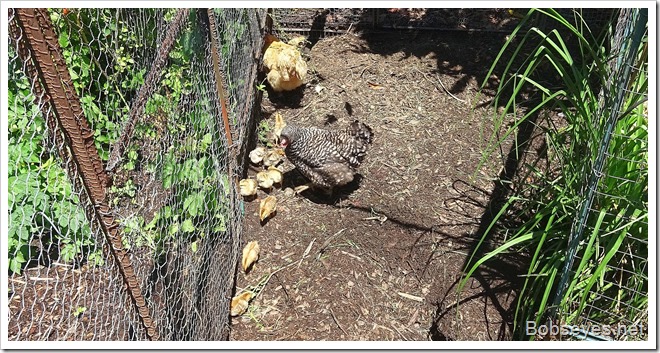 I bought two more little pulleys yesterday so I wanted to fix up the rodent proof feeder to make it work better. The lid is hitting the can and the pulley I  have on it is binding up so the lid is coming up when a chicken moves the trip lever.

This is what I had that I wanted to make better. 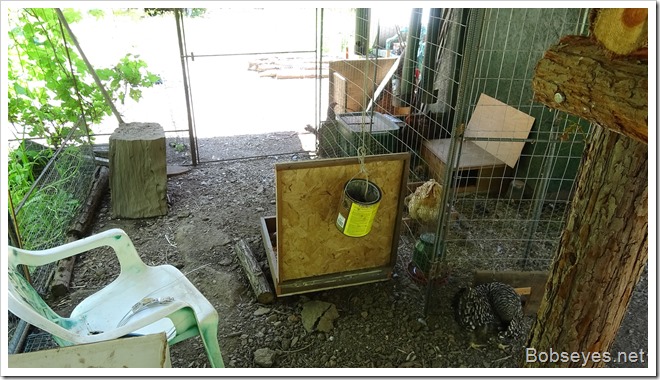 Here’s the feed tray with the lid open showing the feed for the chickens. 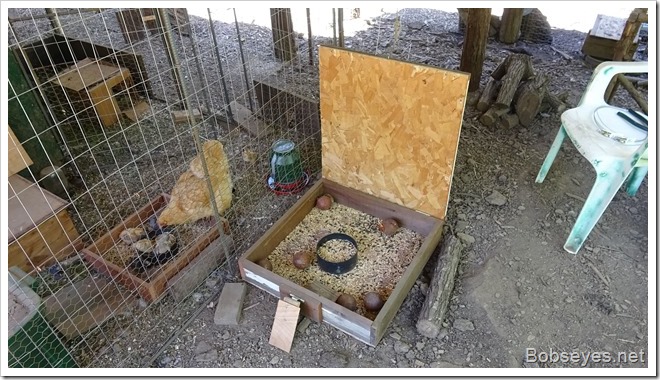 So I wired the two new pulleys up in this fashion to help make the thing work more smoothly and actually open when a chicken triggered it. 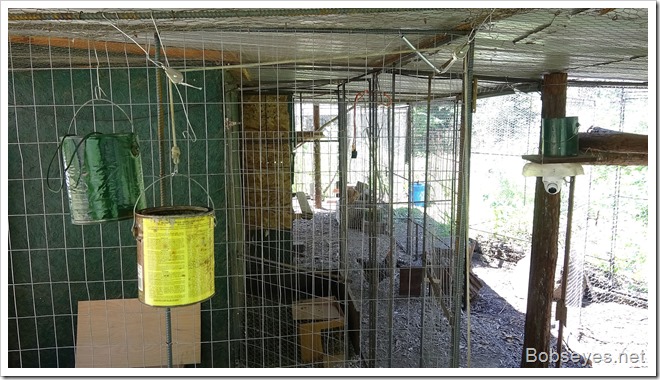 Now the lid will open when a chicken hits the trip lever on the right there. Now I just have to train them to open it up with the trip lever. 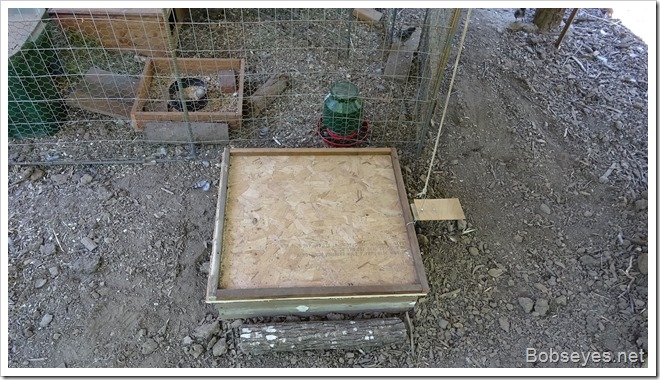 Once that project was complete I went back to work on the new nesting box I was constructing the other day. 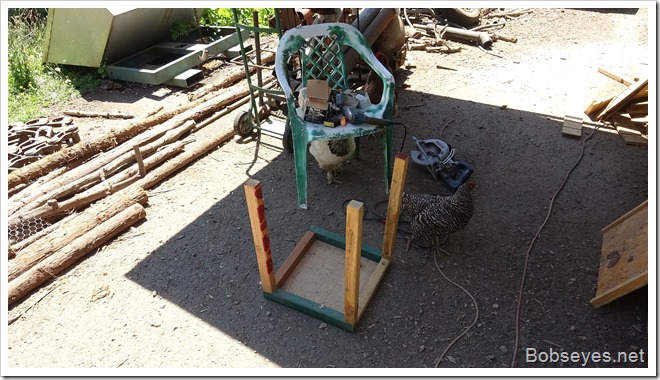 I added some more parts to what I had then took it into the main pen to install.

But I had to get through all these guys first. They were moving all over the place fast. The little guys sure can move, much faster than the big guys. 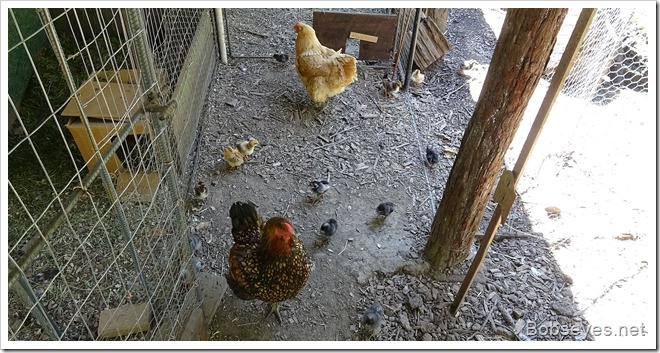 Here’s the new box getting put into place. Some chickens are keeping an eye on  me. 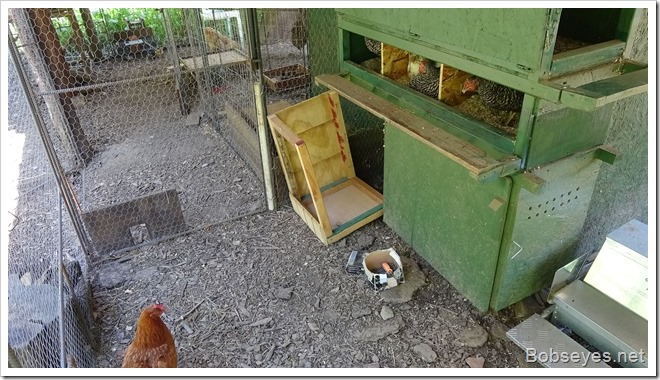 I got the box installed without too much trouble. I wasn’t really sure what I want for a front for this box yet so I did this temporarily. The little guys can get in for now. I’ll change it around later for the larger birds. 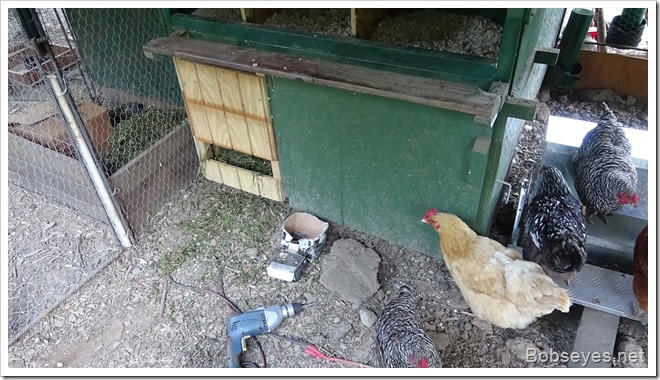 Late in the day I loaded my kayak and all the stuff that goes with it so that was ready to go.

This hen wants to be a momma

This chicken has gone broody and wants to be a momma, so she sits in the nest most of the time. It seems other chickens know she wants to sit on eggs so some of them join her and leave an egg for her to take care of. At first I wasn’t going to let her have any eggs but what the hey, eh. Let her be a momma as that’s what she wants to do and what’s a few more chicks. 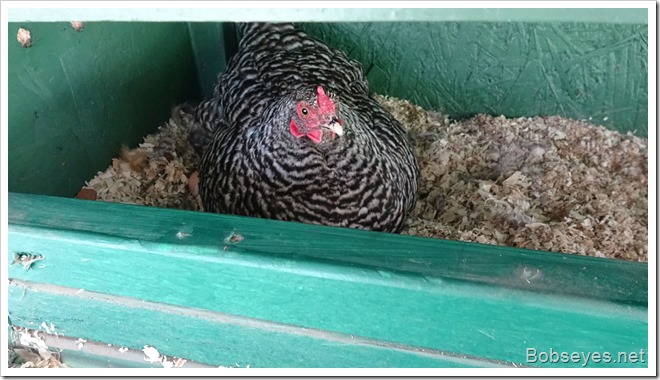 Finishing up the van prep

I think I‘m mostly all packed for this trip up to Fort Bragg, except for some food stuffs. I also greased the van and added a bit of oil.

Off on a trip

I’ll be leaving tomorrow morning not too early as I only have a couple  hour drive up there. My plan is to spend a couple days in Fort Bragg kayaking some rivers and then drive back to Boonville and spend some time at my friend Marty’s camp which doesn’t have any internet. I’ll be posting when I can.

1 Response to Rodent Proof Tray, Nesting Box Construction, Peeps and Prepping the Van for a Trip