Some work and some play

I had two things in mind to do today. One was to check the water springs and disconnect some of them for winter as we don’t need that much water and less springs during the rains means less clay in the water during a big storm.

I gassed up the quad runner. As I was riding through the apple orchard I was thinking I would need a coat later when I rode the bikes, but maybe it would warm up. It was sure cold now, but still early in the day.

It’s always warmer once up in the hills a bit. I rode up this hill. 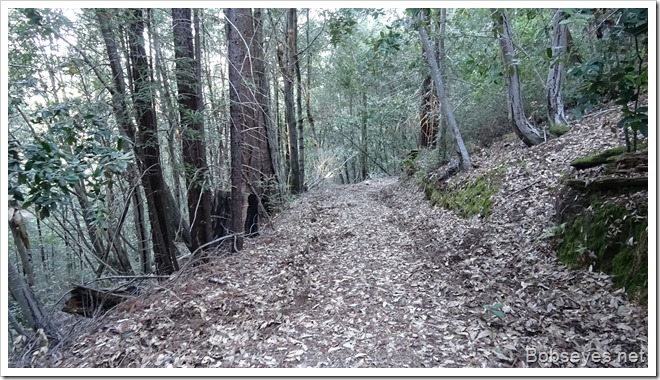 I stopped at the dozer for a bit on the way to see how much fuel it had in it. Not much. 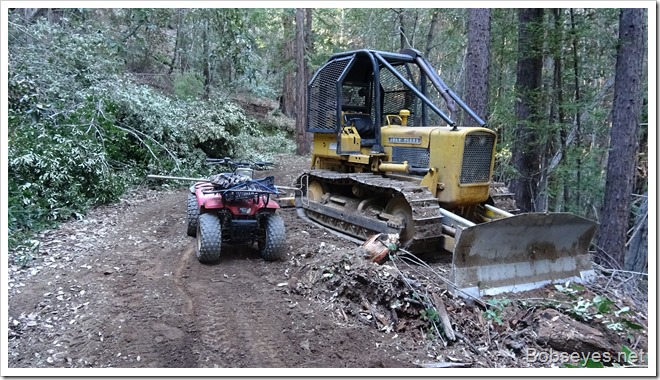 As long as I’m checking springs, I also will do some road work, that’s why the rake. 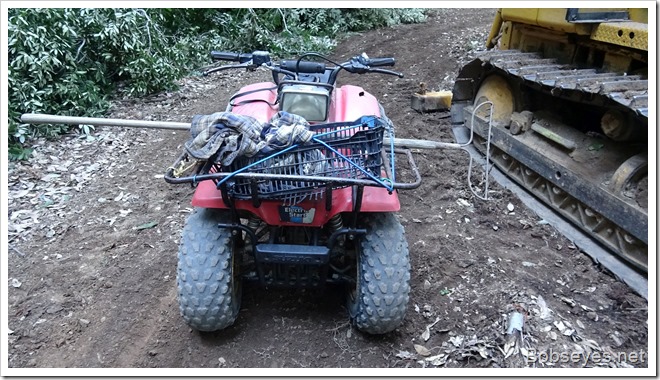 I stopped here to get the rocks off the road. I usually just throw them down the hill, but I also find they are very useful to repair water crossings so I put them on the side of the road to be picked up at a later time, maybe. 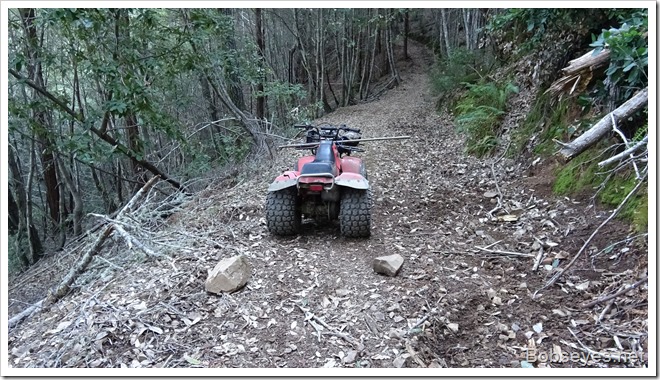 There’s a spring tap behind this wild pig wallow that I disconnected for the winter. 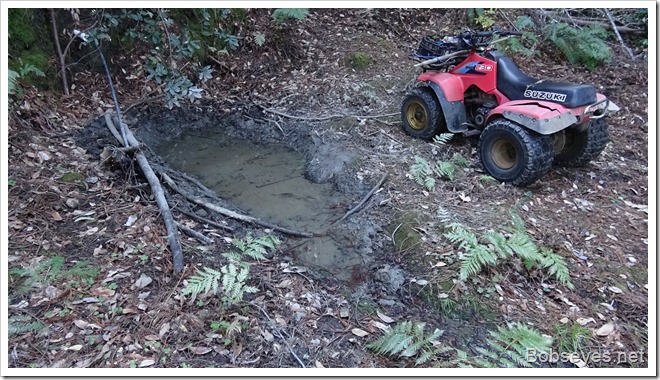 I rode on down the hill a bit to this spot where I walked up the draw and diverted some more water out of the main line. 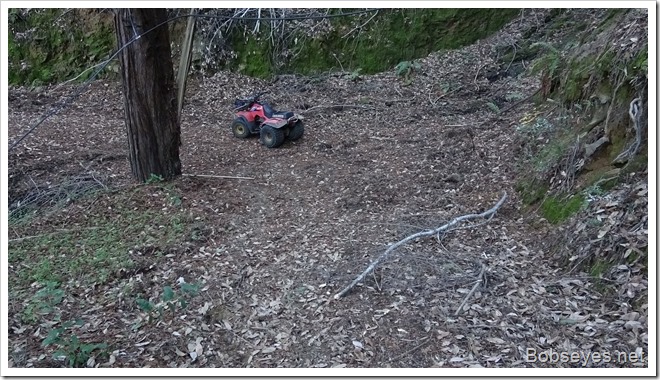 Continuing on down the road I make it to our main water tanks and checked them and they were all full. 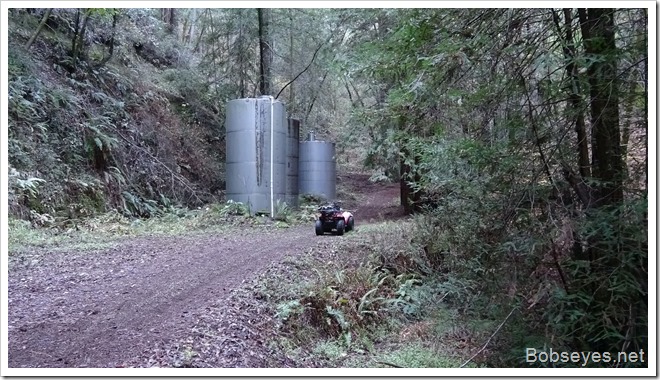 I walked the ravine in back of the tanks where I have some valves to divert the right main spring out of the system. It’s a shame to waste all that water, but it didn’t cost anything, that’s one of the nice things about using springs for water. 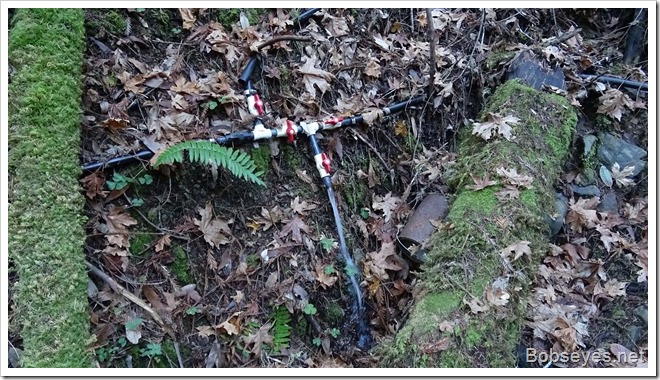 Orchards warming up a bit

I rode on back through the apple orchard which was a little bit warmer now. Warm enough I figured I didn’t need to go home for a heavy coat.

40 years since I last did it

I haven’t ridden a dirt bike for about forty years, but today I was going to fix that, times two. I some times call my quad runner a bike, so you might of thought I had a motorcycle, but not yet.

Two of my brothers bought motorcycles recently and I knew where they were parked, at the bottom of the apple orchard.

Taking the bikes for a ride

I decided to take the smaller one out first, my brother Mikes bike. I had to figure out how to make them go so I put my glasses on. Mike’s bike had electric start and no key. I turned on the gas and after a bit got it going. 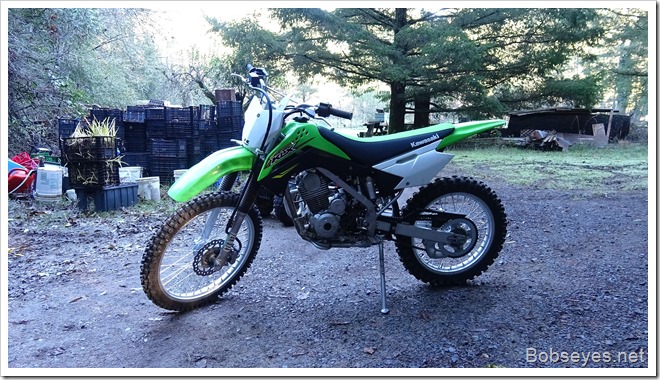 Things were a bit squirrelly as I started off, mostly from not riding in so long. I almost lost it in the creek right away getting though a tight spot, but off I went.

The bike went faster than I was ready to go, but as I climbed the hill my speed picked up. I was at the ridge top overlook shortly. I made it without killing or maiming myself. :O)

Overlooking the town of Guerneville. 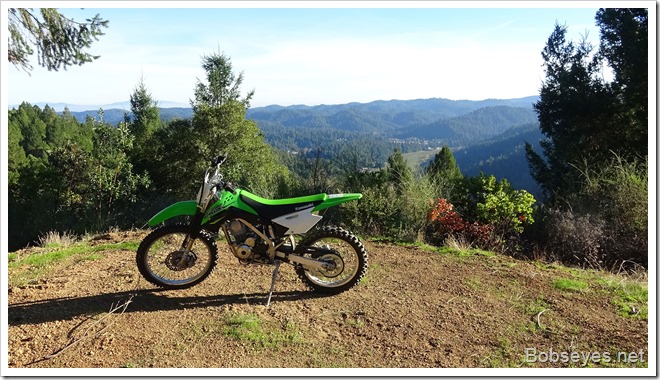 I sat there for a bit, then headed back down the hill to try the other bike.

This bike is bigger

This one is my brother Barry’s. He told me where the key was but I couldn’t find it. I looked and looked and was about to give up, but one last look and I found it.

This bike is a bit more powerful than the other one. I got it started and almost ran into that creek again in the same spot.

Now that I had some practice with the other bike I let this one out a bit. Zip pity, zip. Varoom. 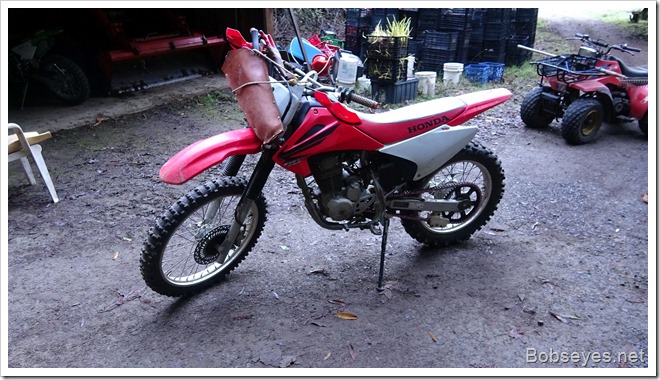 Needless to say I made it up the ridge top a bit faster. 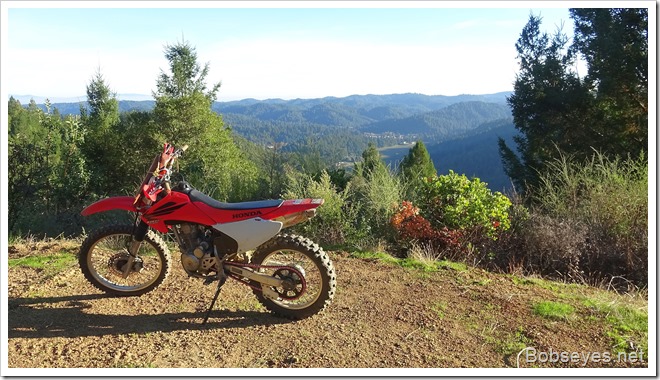 I let it out even more on the way back. I did remember that I’m not as young and immortal as I used to be so did hold it back a bit. :O)

I’m thinking I need a bike to haul around with my van to explore the deserts. So I’m thinking more and more about what is needed for me to accomplish that.

A crane should do it

I need to make some way for the van to haul one around first, so I’m thinking on that. I’m thinking a little crane lift on the back of the van might be the way to go.

Anyway after about forty years dirt bikes are still fun.