Rocking the Washout and the Chicken Hawk Strikes Again

The rain stopped sometime last night and the sun was out today. We have  more rain coming in, in a couple of days so it’d be a good time to put some more rocks in the water crossing that was washing out.

li got my rig started and headed on up into the hills to do the work.

Not a beaver dam, darn

On the way I spotted this dam in the creek on the way up and thought beaver. 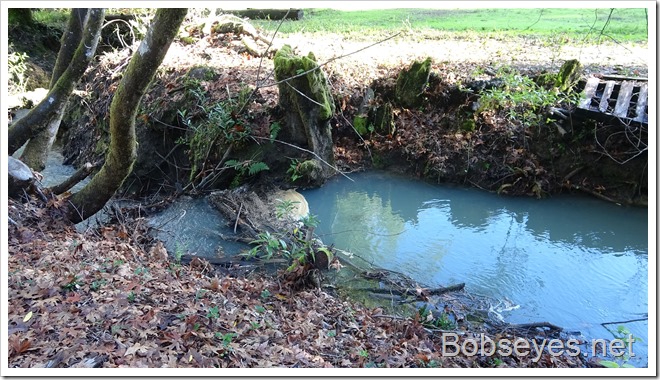 I knew it wasn’t beaver but it would have been nice if it was. Just a stick and debris dam from the recent rains washing this stuff down in a downpour and jamming the water up. No problem here so I moved on.

I had to cross this water and it was also dammed up a bit so I stopped and got out to move some of the sticks to lower the water a bit before crossing. 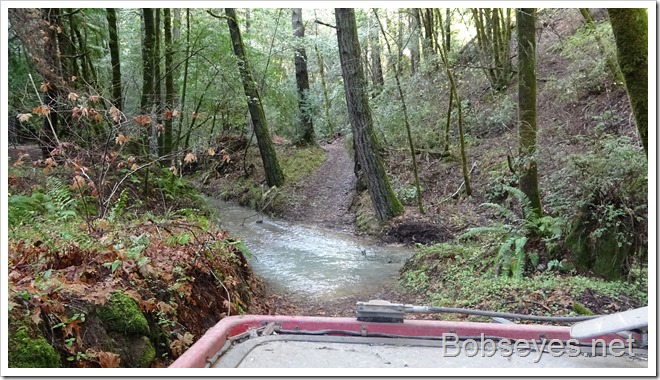 I removed some sticks from the water here while standing in this fairy type stuff. Sorrel. 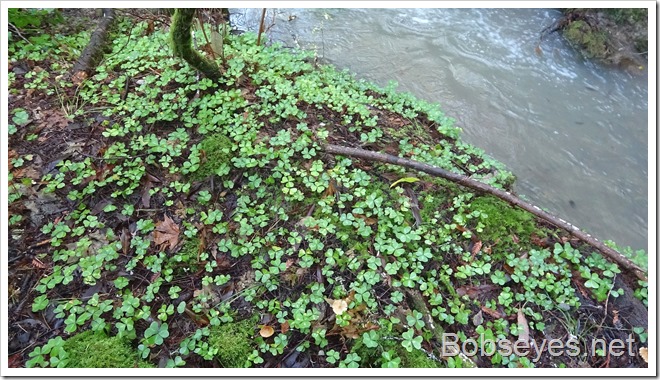 I crossed that water and drove on to this spot and stopped to load up the rocks here. 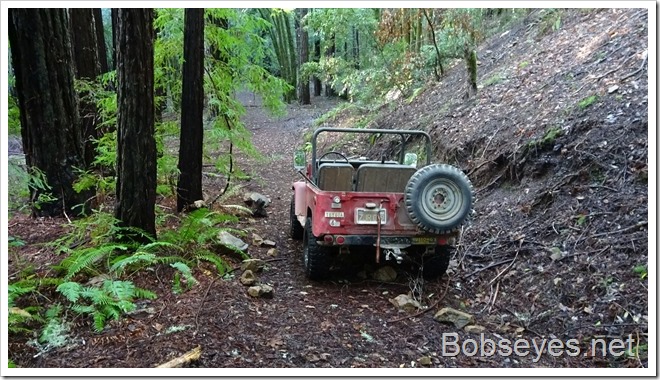 I plan to put all these rocks in the back of my rig. 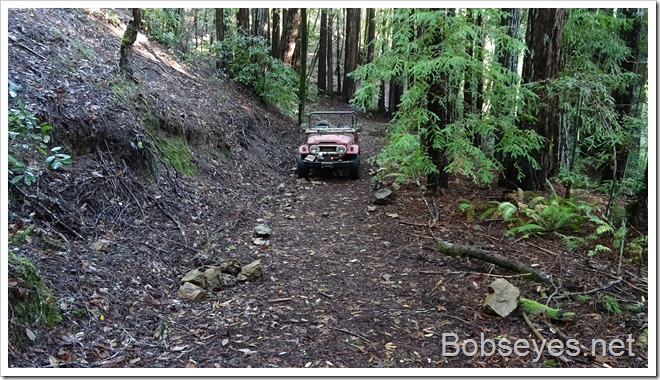 Bigger rocks like the one on the left I used the sledge hammer to make them smaller. 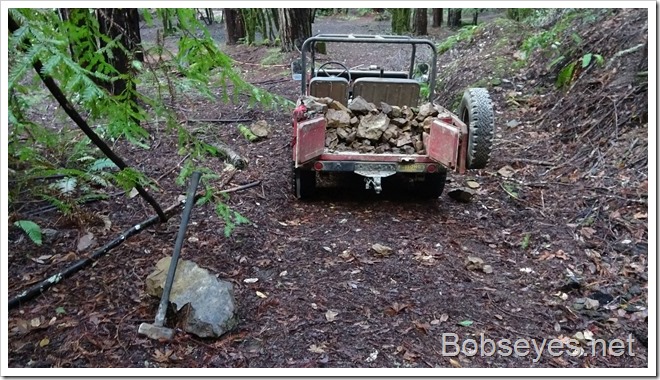 I got all those rocks loaded and the road cleaned up nicely. 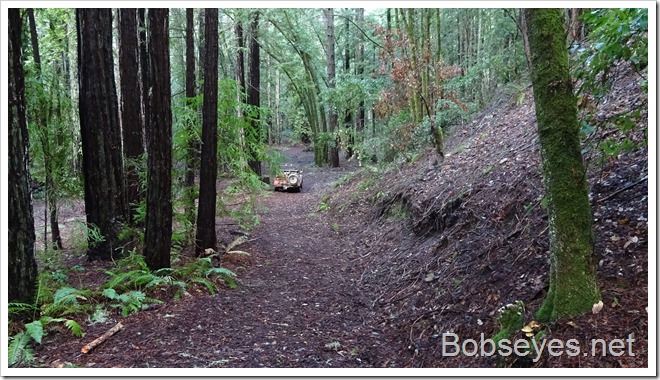 Loaded up with rocks and ready to head up to the washed out water crossing just up ahead a bit. 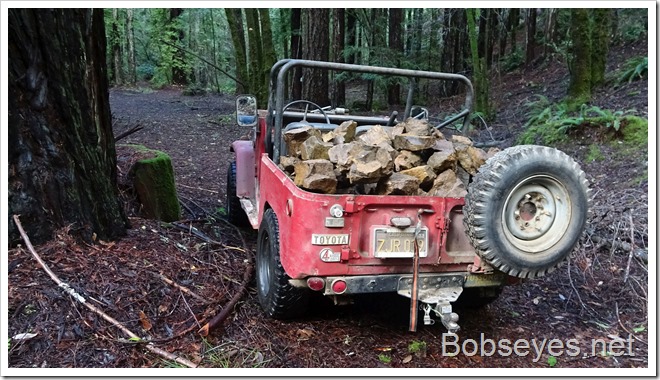 Here I am at the washed out crossing area I’ve been putting rocks in to repair. 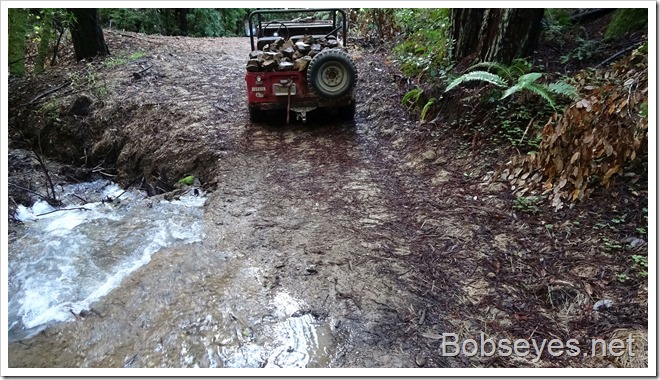 I plan to add some more rocks to what I already have put in on the left side a couple days ago. 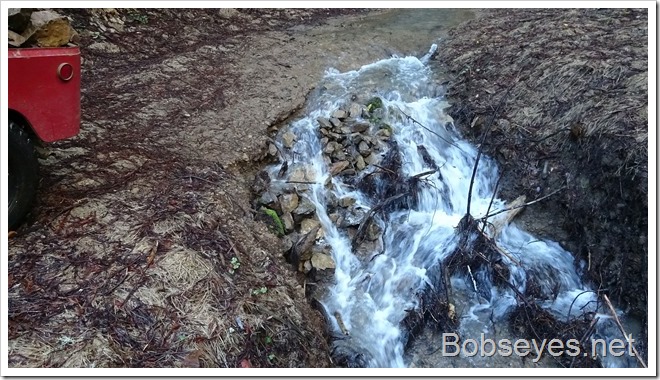 It’s easier to unload rocks than it is to load them and I soon had them all unloaded and in place. 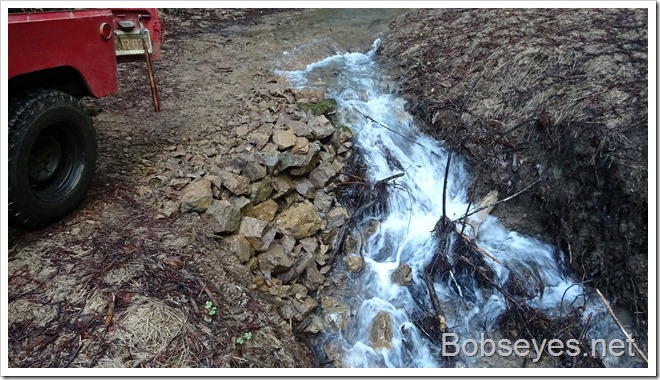 That fixed things up pretty good but I could still use another load or so of rocks to finish this up nicely but it is much improved. Let it rain. 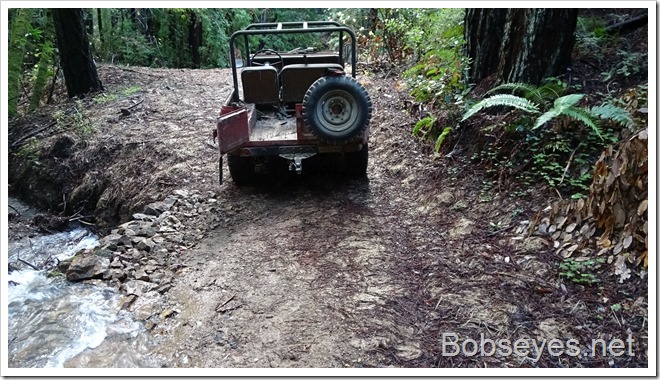 I headed for home and a break as one load a day of those heavy rocks is enough for my back.

I lost another chicken to a hawk yesterday so when I let my chickens out when I got back I sat and watched them just in case that hawk was around as it seems to hit in the late afternoon.

The chickens where grazing away while I sat and watched. 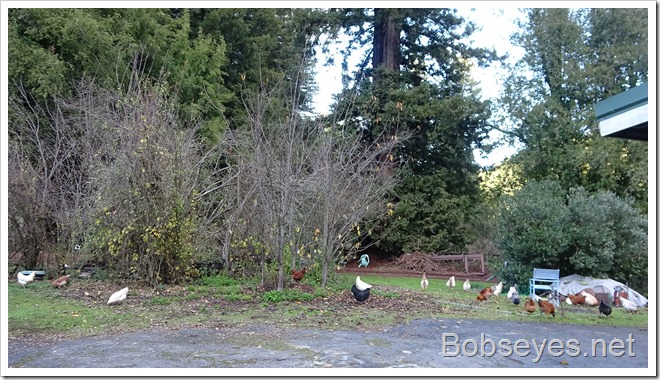 After about a half hour I got up and went into the house for something.

I’d just gotten in the house when I thought I heard the chickens danger cell so I headed back out and there were no chickens to be seen.

They were all hiding in the bushes. 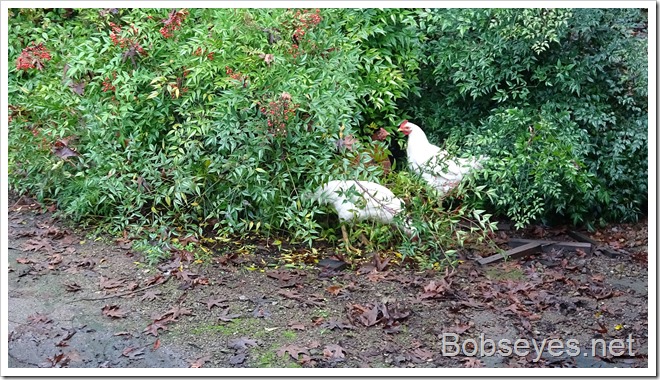 When I came out and looked I saw a small hawk jump into the air and head over to a tree by my main gate and land so I went over there to see if I could spot it.

I was looking up in the trees for it. When I spotted it and made eye contact it took off to another tree which I also went over to see if I could spot it again.

Again when I made eye contact it took off.

Now that hawk must have been watching me sitting out there and attacked when it saw me leave for the house. Smart hawk.

It appeared the hawk missed it’s target as there weren’t a bunch of feathers and no dead birds.

At least the chickens are now aware of the hawk and are watching out for it, it appears.

So, the chickens were safe and I got a good load of rocks moved today for some good exercise.

It may look like I’m trying to fix some stuff and I am but what I’m really doing is getting some good exercise, so I don’t look at it as work.