Road Work In the Hills and Rat Control Testing

Getting exercise in the hills

Marty came by for a ride and some exercise today.

We loaded up the chainsaw and took off for the hills once we got our bull session done and some chair hopping around the yard. Oh and we did some fruit and berry sampling before we loaded up and took off.

We headed on over to  my cousin’s place where I knew there were some trees blocking the road.

There’s several trees across the road here but they are up high which makes them harder and more dangerous to remove without getting hurt. Since this wasn’t a main road, I decided just cutting a hole through the trees would be the best way to go, at least for now. 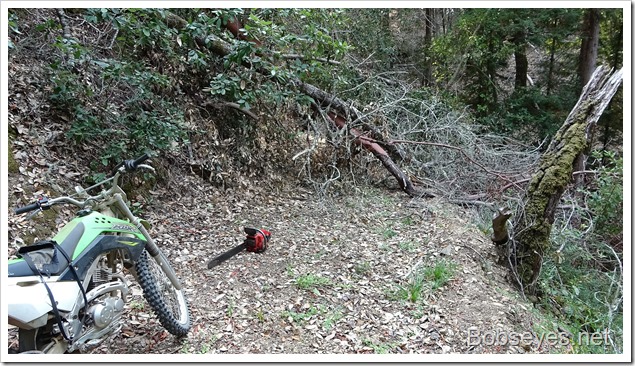 We cleared this hole through the trees so we could ride on through. 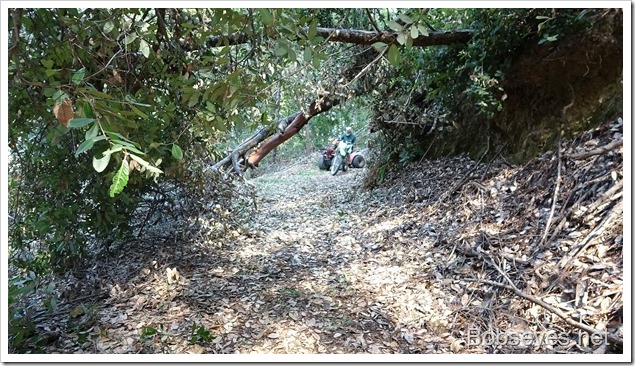 After that we needed a break so rode on up to the ridge top to take it easy for a bit.

Lot’s of smoke in the view from forest fires somewhere else. 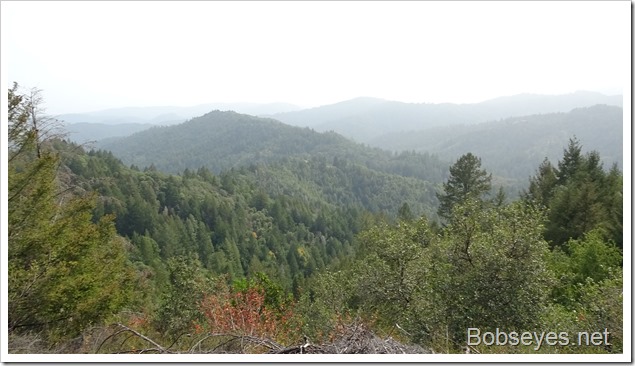 From there we headed on over towards our place and stopped here to cut this tree off the trail. 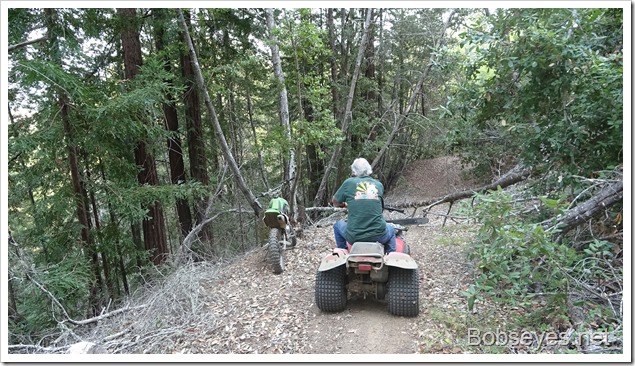 This one was fairly easy as it was off the ground just enough to make it easy to cut and remove in pieces. Marty mostly got to stand and watch me get the exercise but he did help remove the logs off the road after they got cut. 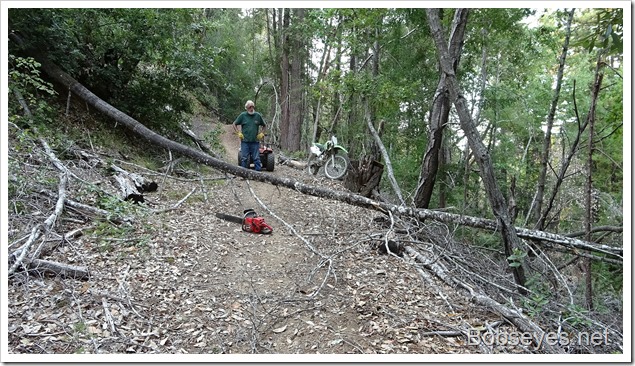 All clear so we moved on down to where I was working on the trails for a rest and a break. 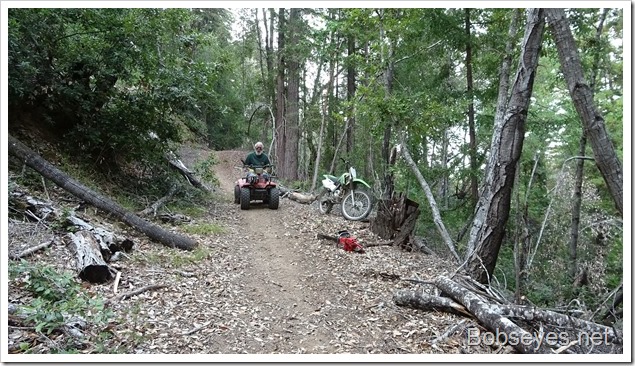 We walked out the trail and found the chairs and put them to work for us. 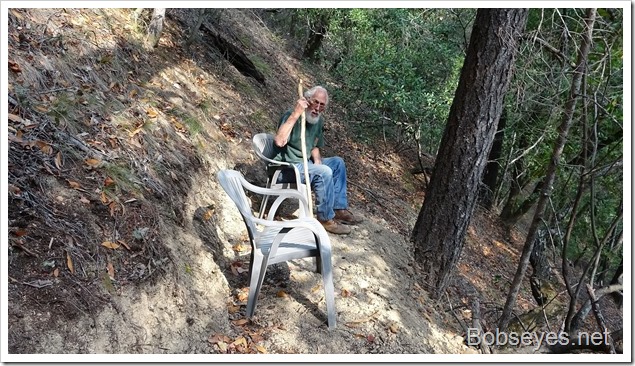 We shot the bull out there for awhile but had to cut it short as we had one more tree to clear off a road, so we headed in that direction. 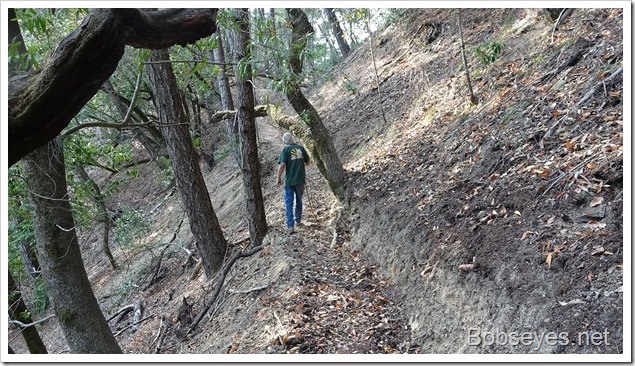 We hopped on the bikes and headed out. 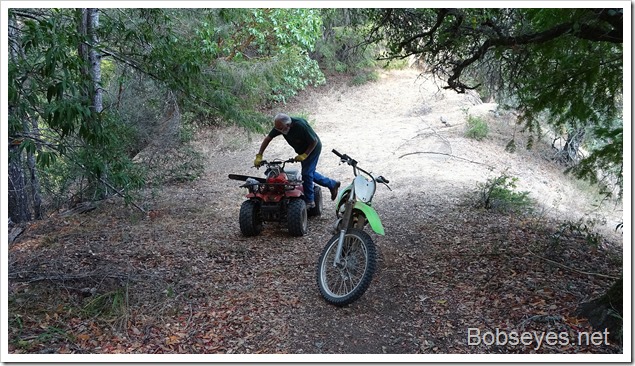 Down this road and a bit beyond. 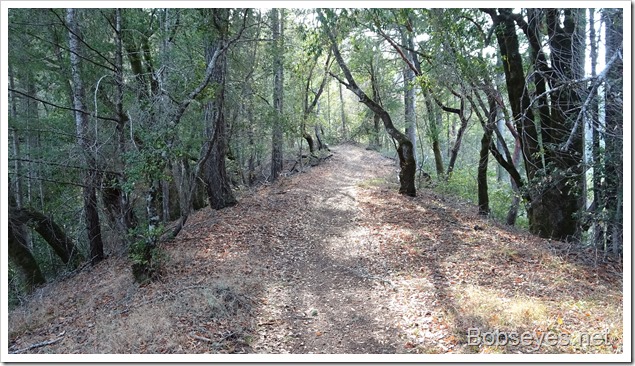 To this spot. This tree fell down a long time ago but was high enough in the air to get under but lately it’s been falling down enough to start blocking the road so time to cut it up to get by. 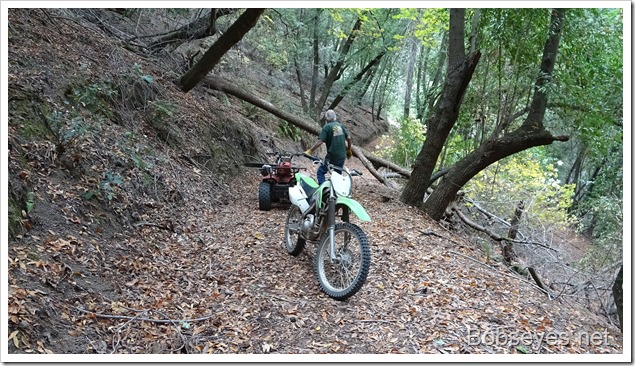 This tree was a fairly good size one so I had to cut it in small enough logs so we could roll them off the road. We exerted ourselves and got some more exercise on those ones. 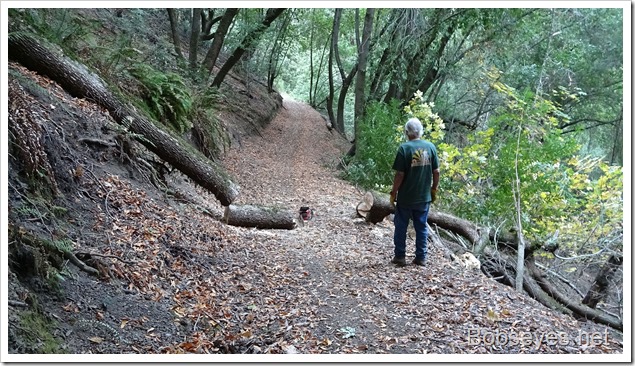 After we got done with that tree we headed towards home. I’d forgotten we were on the road to our spring so we stopped for a much needed drink of fresh spring water. 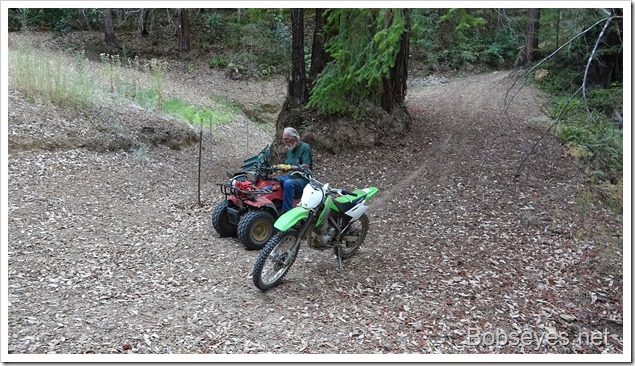 Last night the big rat with the three little ones only came by early but just looked at the bait and passed on by. There were a few other rats that just nibbled around the edges of the bait can which I’ve seen before, but the other rats tend to keep these ones away when they are feeding. Since the other rats weren’t feeding these other rats moved in.

Even though the big rat with the little ones came by and didn’t partake, they looked like they were doing ok.

Tonight the other rats showed up first and  were mostly just nibbling around the edges of the bait can picking up spilled bait and I didn’t see the big rat with the three little ones, until about ten and they did stop to feed around the edges a bit, but not like pigs, but the night is till early.

Here’s the big momma rat and this is as far as she would go into the bait can.She appears to be healthy but cautious 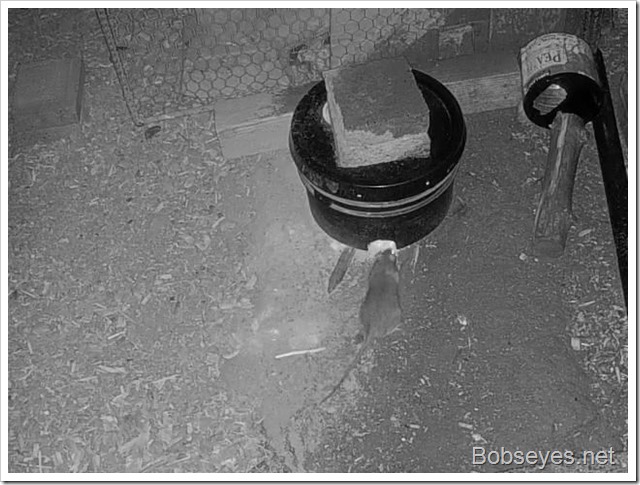 And her three little ones nibbled around the edges too, so far tonight. 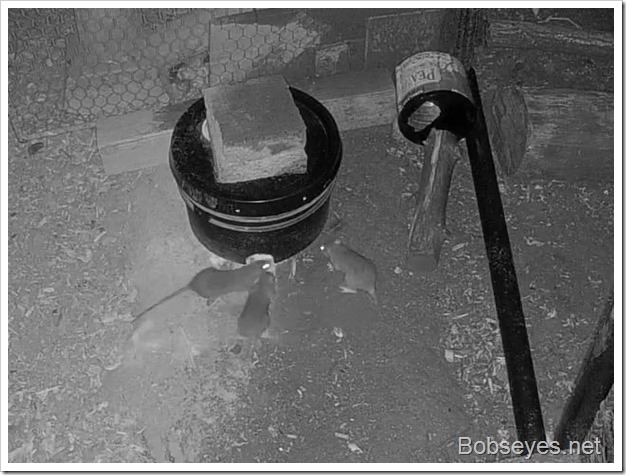 So far it doesn’t appear that the plaster of Paris is killing any rats, but it’s still early.

I’m thinking to be sure, I would need to do another test by catching a rat alive so I have it in a cage to try the bait on it so I know for sure as it’s hard to tell the rats apart and hard to be sure about most anything.

The other thing that might interfere with this test is there’s other stuff around the yard to eat so it’s hard to determine just how much each rat eats of the bait.

So, in truth, I can’t really say for sure just what is going on but it appears that so far the bait isn’t doing it’s job.