River’s Mouth Opened and a Paddle at Monte Rio

Gooped up then off for a paddle at Monte Rio

I started out the day with a soak in my tub, then smeared the steroidal cream on my  whole body, pretty much except my head. I did do my ears. I try to let it soak in a bit before putting any cloths on. Then I put a pajama top and bottom on to absorb some of the stuff before putting my regular clothes on. I seem to be alright with all the steroids in the cream, but covering one’s whole body in gooey stuff is a weird feeling in itself. I used one tube of the stuff.

Yesterday I went to Monte Rio and kayaked down and back, but I forgot my camera so today I decided to kayak in the same place as yesterday.

But I was wondering what condition the river’s mouth was in as it looked like it was opened up Friday from what the water level looked like at Monte Rio. It had dropped indicating the mouth was open.

So I drove on down to the overlook at Jenner to have a look see. 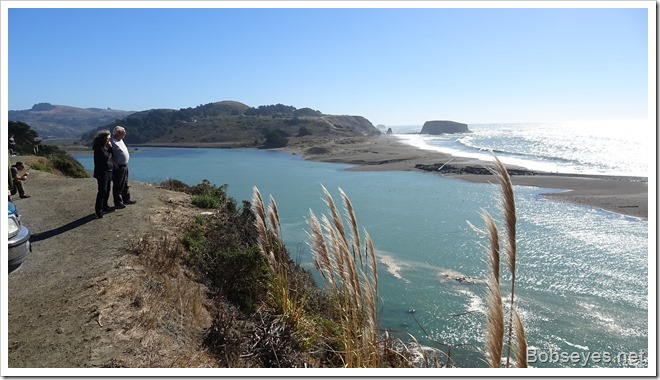 The river’s mouth had been opened up

The river’s mouth was open wide. The County water agency must have opened it because the sand was real high in that spot when I last looked, too high to open by itself. 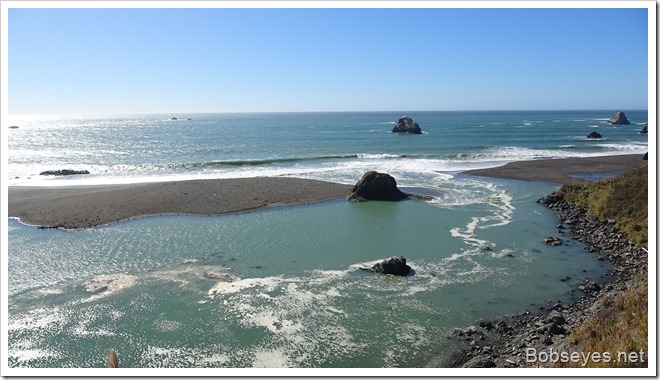 There were lots of birds resting down there on the sand. Some pelicans and seagulls mostly, but there were some terns and crows and likely a few other birds mixed in. 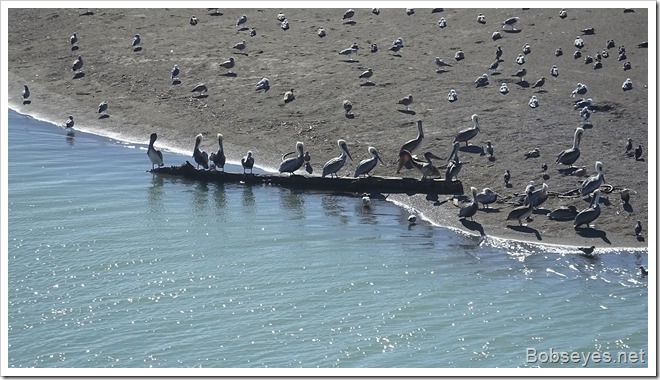 Just below me there were some harbor seals resting on some rocks. 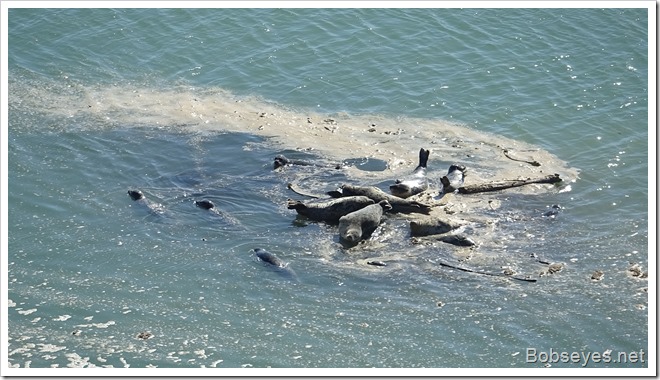 Having satisfied my curiosity about the river’s mouth, I drove on back to Monte Rio to the boat ramp there.This was what I saw when I got to the boat ramp. It’s that time of year that they pull the private docks out of the river getting ready for winter. They usually jam up the ramp doing it as it takes a while. 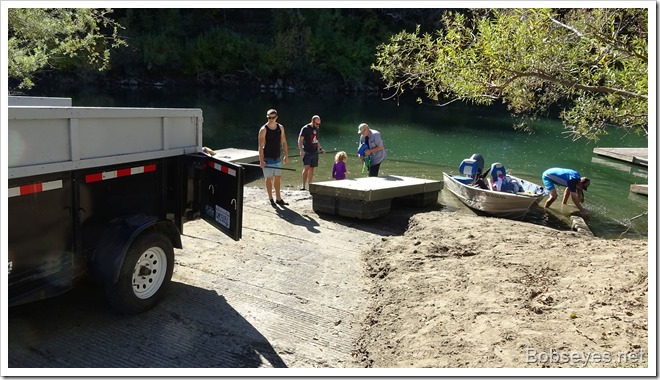 I informed the guys I wanted to put in and please keep at it and I’ll try to be patient. I found that’s better than standing there waiting and just getting mad about the situation.

They took awhile but they did keep at it and were out of there with apologies.

Ran into a river otter right away

I put my boat in the water and started down river and ran into this lone river otter fishing in the weeds because the weeds are loaded with crawdads and little fish among other things. It has a crawdad it’s eating here. 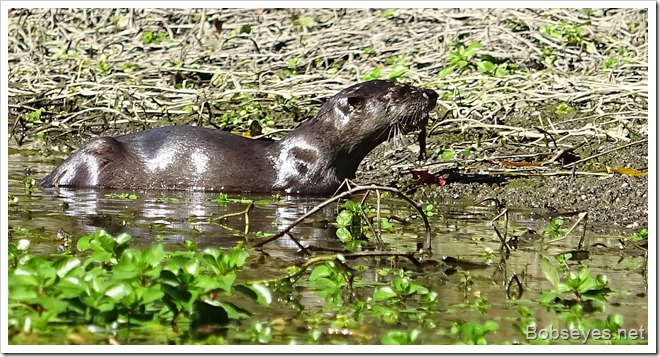 The otter was feeding in the weeds, so I pulled my boat into them to watch and see if I could get any good pictures.

Otter checks me out

This was the best I could do.  It came up right by my boat to check me out, then calmly dove and continued fishing. 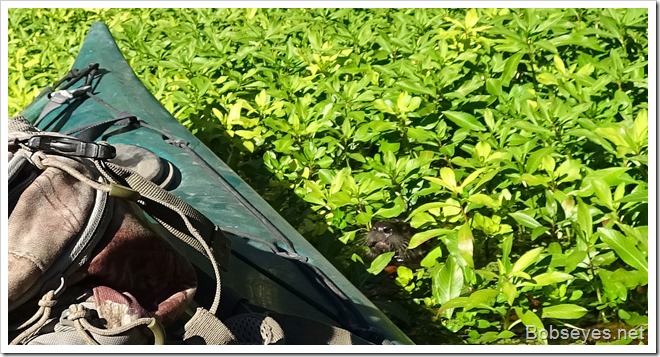 I left the otter fishing away and continued down stream at a leisurely pace. 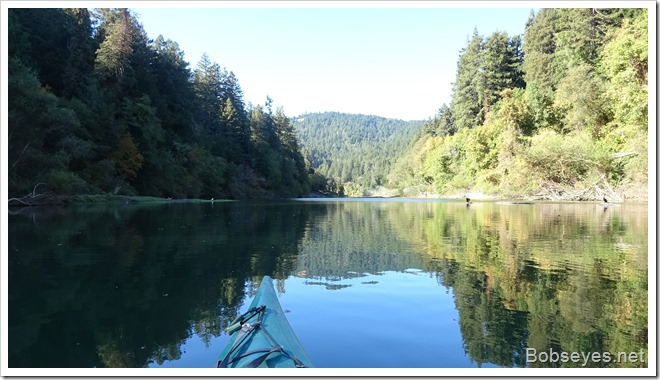 I wasn’t going far today, only about a mile down river to this spot called Villa Grande hole where I sat in my boat watching for a good while. 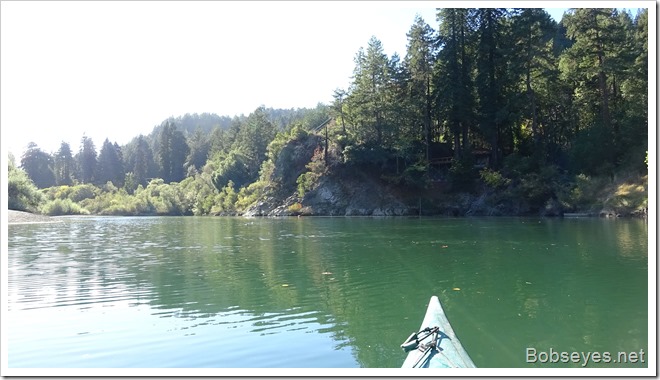 My buddy the seal came by to say hi and so did this duck. 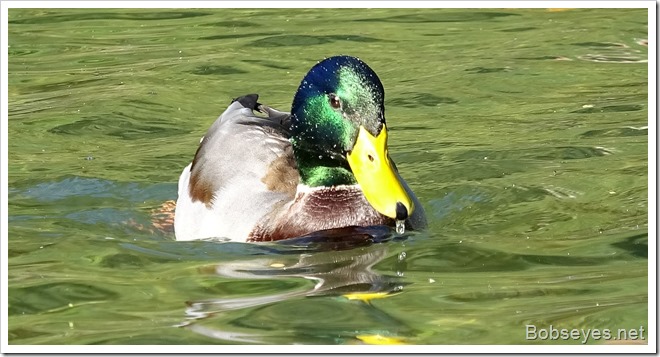 Eventually I started back up the river. See those crows on the wire there? 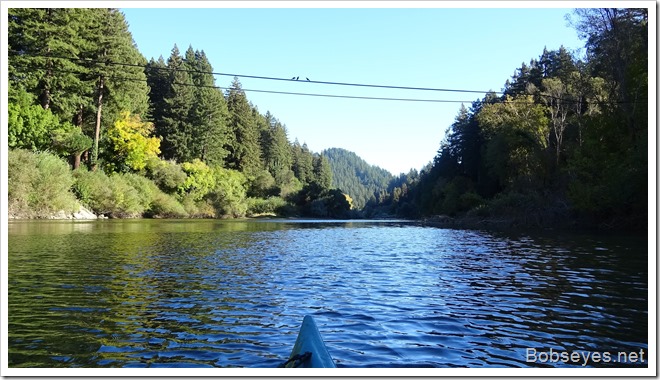 They  seemed to be having some kind of pow-wow. 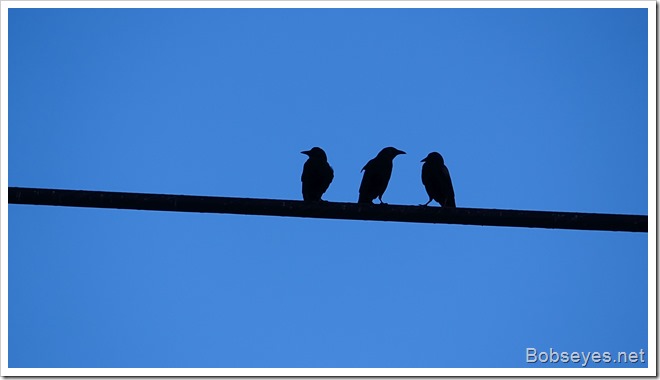 I was sitting here in my boat in the shallows when this harbor seal pops up. 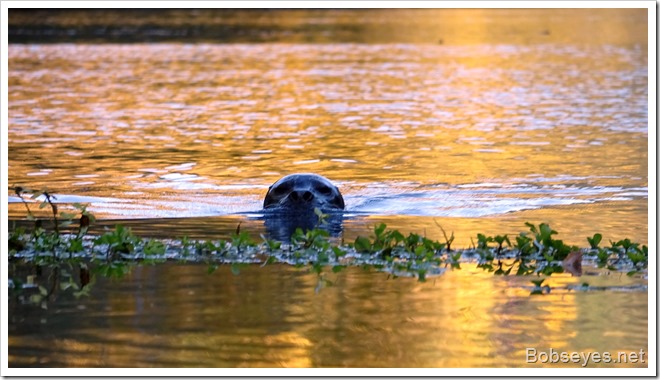 It dives again, but what I see next is not he seal but some big fish about six feet long swimming by in front of me in the shallows.  I couldn’t make it out, but it had a fish type tail, not a seal type. I took some pictures but it was under the water so my pics didn’t come out.

I continued on up the river going past these herons. 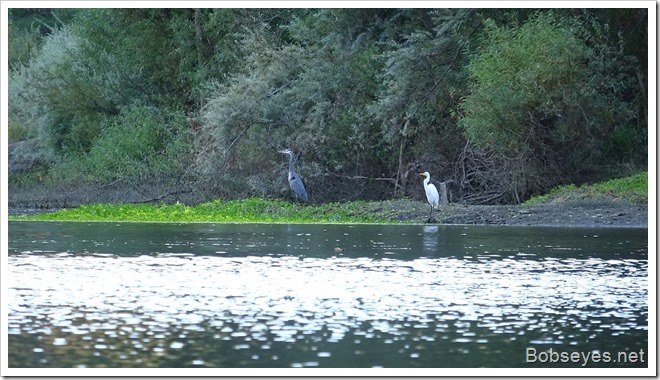 I stopped in this spot for a rest or more like a watch as that’s what I do when I stop. I’m just below Monte Rio which is up by that mountain in front. 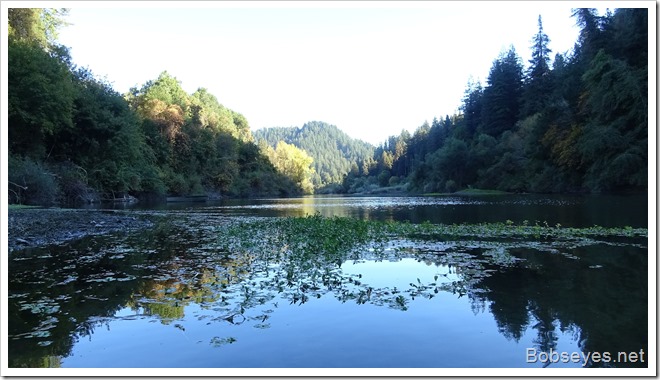 The cormorants like to rest on this submerged redwood log. They got a little nervous when I went by but didn’t fly off. 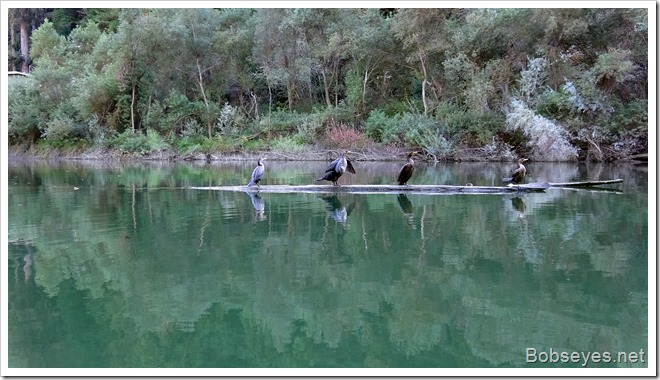 I made it back to the Monte Rio area and paddled on over to the boat ramp and pulled my boat out for the day. 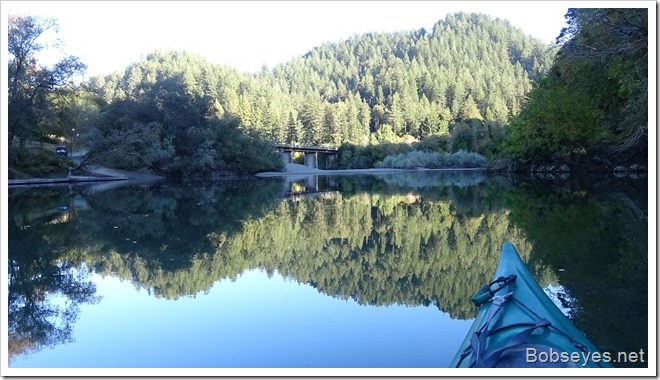 I went on home and did mostly nothing for the  rest of the day.

Tomorrow I need to be in San Francisco at 8:30 in the morning, ungodly hours for me.

So I plan to leave in the wee hours of he morning before traffic gets too bad I hope, around three AM.

I’m to meet with a group of doctors that study special type cases. So we’ll see how that goes and report back.