To go or not to go paddling today.  The sun was out nice and I considered just staying home and enjoying it and working in the yard,……….but.

I can always do that and the older I get the more I’ll be in my yard so for now, it’s let’s get it going as life is short.

So I did some chair hopping first around the yard in the sun and then headed out for a yak at Jenner.

I stopped at Monte Rio to see if the fishermen where doing any good, but here were no fishermen at Monte Rio when I was there and later I found out why.

Jenner and the reason why

As I approached Jenner I could see the river water was real  high which could only mean the river’s mouth was closed to the ocean, like a dam so the water in the river was being backed up. With the mouth of the river closed no fish could come into the river so that’s why there were no fishermen at Monte Rio today.

So seeing that, I drove on down to the overlook to  have a look at the river’s mouth to have a look see.

To my surprise the mouth was open. Ha, it must of just opened up at low tide as that’s when it usually does that which was just before I got there. The ocean was fairly rough. 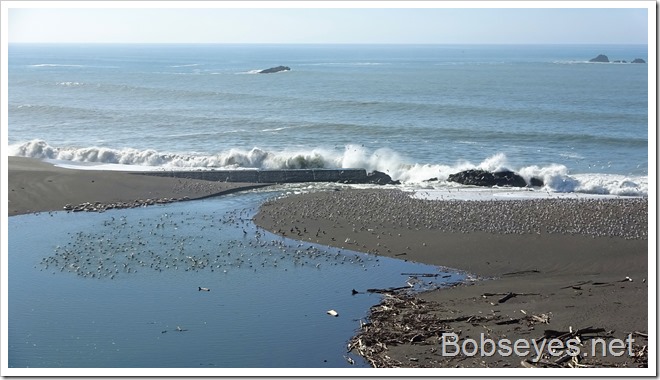 Fish can get in now

With the river’s mouth open the spawning fish can come into the river to spawn so the fishermen will be back. There were lots of birds resting on the sand down there, mostly gulls. 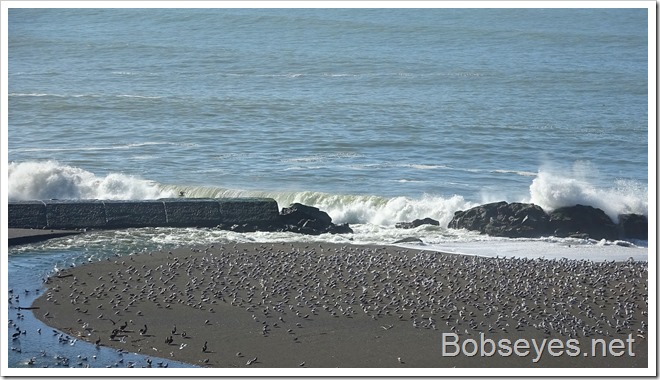 Well, ok then. Now that I knew what was going on I went back to the boat ramp and put my boat in the water.

Since I just saw the mouth area I decided to go up river a bit. So, I paddled across the river and started on up it going by the upper end of Penny Island. I always paddle into this spot to stop and watch and just take it easy for a bit. 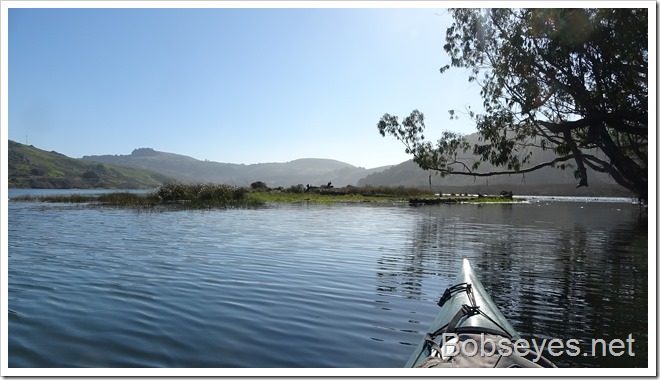 I worked my way up the river taking my time as I went. 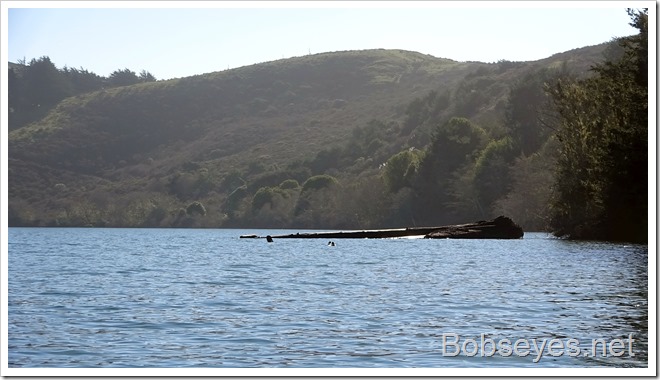 I paddled up along here moving along the shoreline on the right side to a spot up ahead about another quarter mile or so. 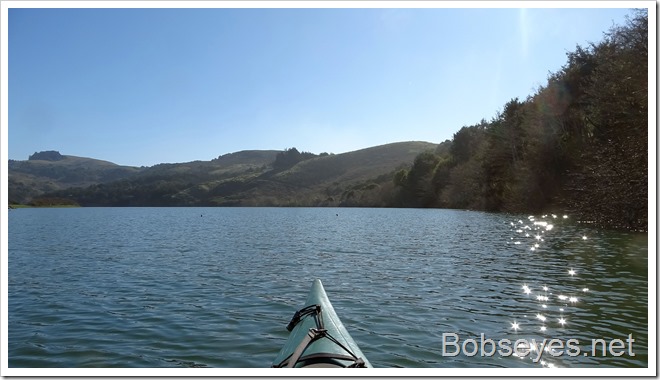 I made it to a nice place in the sun I call Muskrat as there’s lots of muskrat nests there as they like the sun too.

I sat and watched and just enjoyed the day doing some thinking about things I’m doing, so I can get them done. 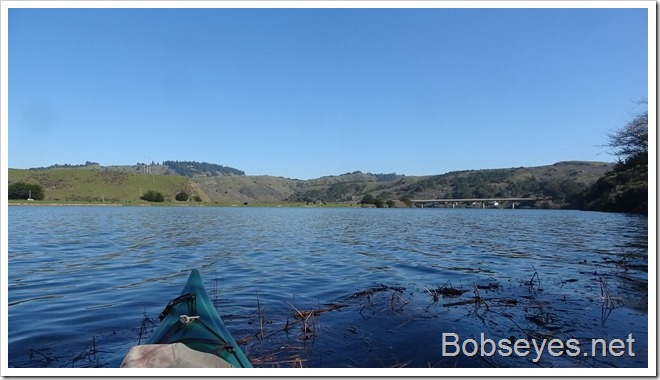 I heard some geese honking across the river from me, by the cattle that are grazing away. 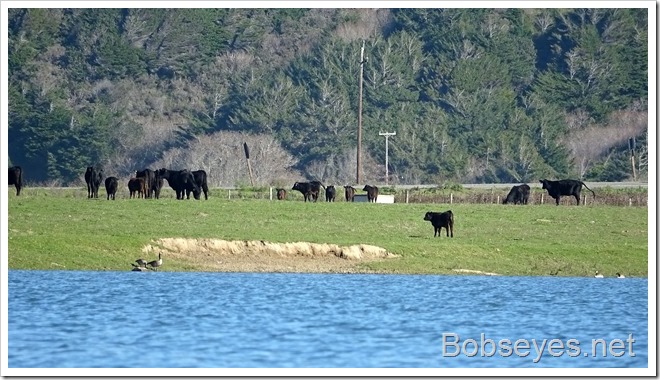 Eventually I started back down the river. I was thinking about places I could go here to use my new drone. This is a trailhead that goes up the hill here, going by some huge old barn owl nests I’d like to fly up to so I can check them out as I’ve never heard of or seen anything like these nests as they go inside them instead of on top of them. I think there’s around ten of the big nests here, about ten feet across is how big they are. I think they are real old. I was thinking it would be fun to fly up and try to look into some entrances, but I better learn to fly better first. 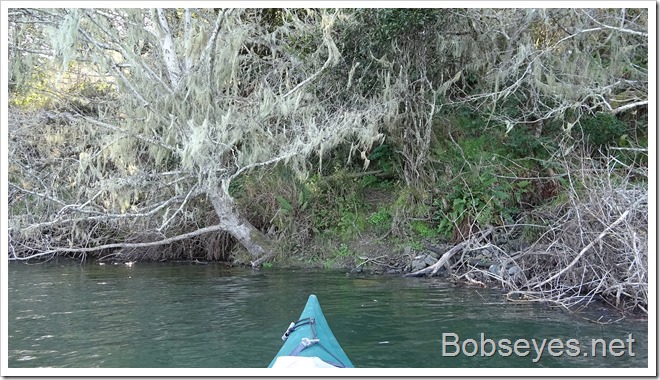 Once I learn to fly a bit better I’ll be investigating some stuff down here. I also know where there are two turkey vulture nests to check out once they start nesting. I’ll have to be careful of the winds down here as flying drones in the wind is supposed to be tough. Of course trying to fly in the wind is a good way to learn to be a better pilot.

I was reading that flying a drone over water is considered risky,…..But.

Flying in the forest is just as risky as if the drone comes down in the trees it would get wrecked just like in the water and I’d not likely find it, so what’s risky, eh.

I made it back to Penny Island and pulled into here for a bit for a break. 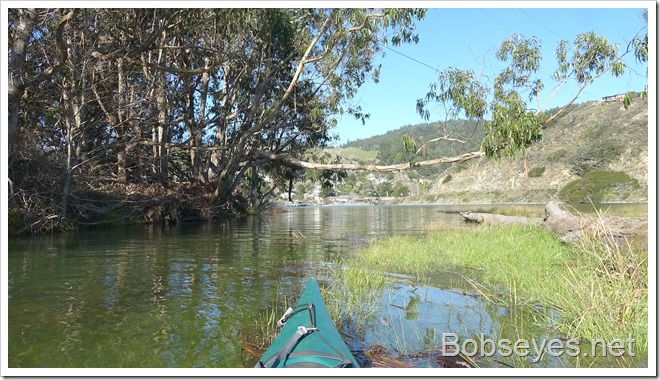 After a bit I headed for the boat ramp and went on home for the day.

I did a little work by moving three wheelbarrows of woodchips onto this trail to keep the mud down. 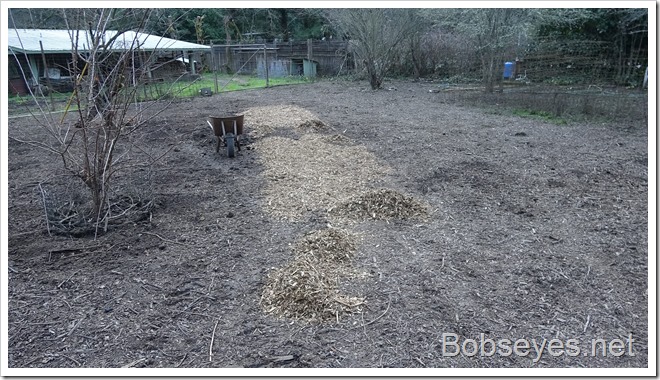 I sat around a bit then I got my drone out for some practice. One of the reasons I bought this drone is to use it to check out stuff I can’t get to easily. Like up at the tops of these big redwood trees. I needed to practice getting closer without crashing into it so I gave it a try being pretty careful not to get too close, but it’s hard to tell just how close the drone is to a tree looking through it’s camera. 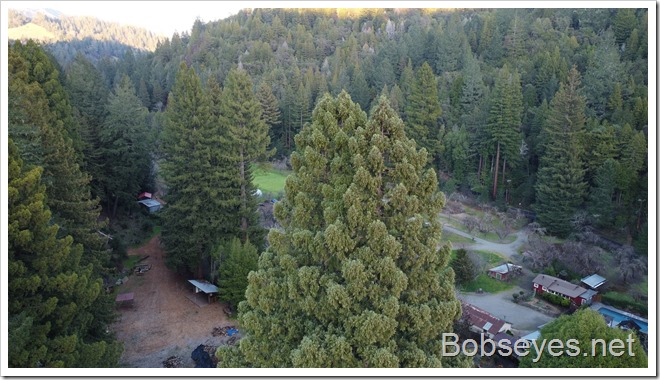 I inched my way towards the top of this big redwood tree and was surprised to see all the redwood cones up there where I hear red squirrels often as they like to eat them. 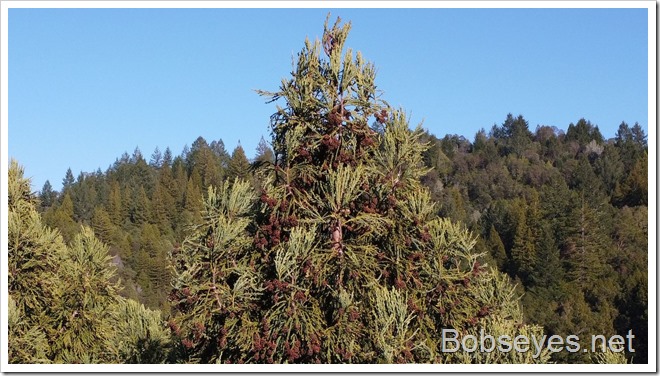 I can see I need a lot more practice doing this if I don’t want to crash the drone. Just hitting anything up there would likely be the end of the drone.

I practiced flying around and checking things out.

I checked out my brother Tom’s operation. He runs Armstrong Valley Farm and grows and sells stuff at the Farmer’s markets. 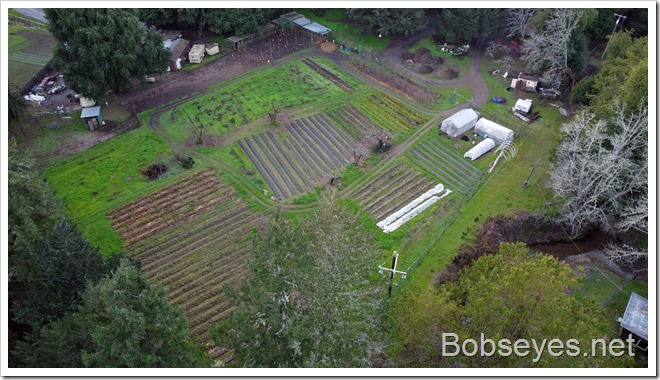 Here’s his chickens. He sells eggs too. His chickens get all of his vegetable scraps. 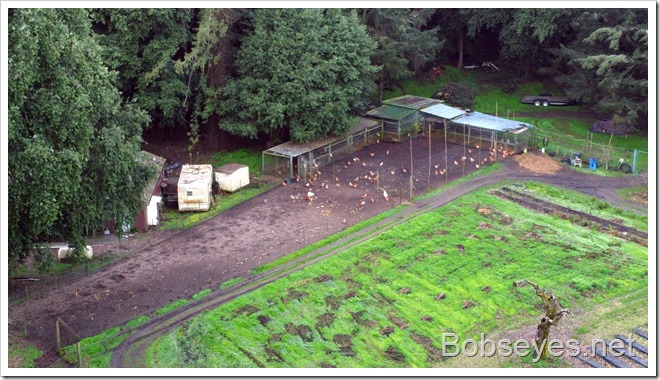 Sitting with my chickens

After the drone practice I sat with my chickens for a bit doing some chair hopping until the night chill came on when the chickens went to roost for the day. 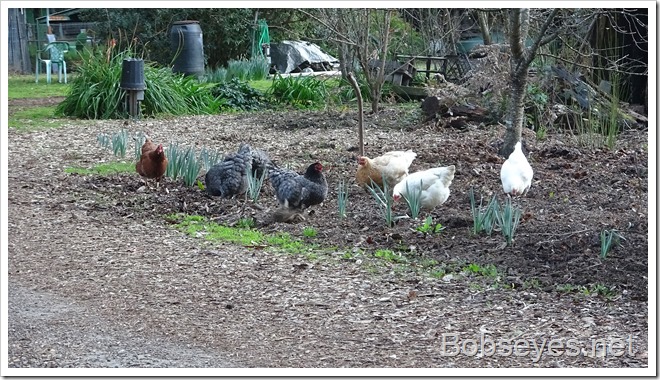 The night chill is also the sign that tells me to get on in the house and the day is done.