Riding Three Rigs, a Stump Too Big and More Pallets For My Mulch Boxes

I’ve been thinking the battery in the dozer has been sitting a long time and needs to be charged up so today I had some time to get this task done.

Barry showed up with two new pallets for me and his chainsaws. He was going up the hill to cut some trees for his firewood, but needed my quad to carry his saws but I was using it. We made a plan.

I brought up five gallons of diesel to add to the fuel tank just to do it as it’s easier to add five gallons once in awhile than to fuel it all the way up.

So I hopped on my quad runner and rode up the hill to where the dozer had been parked and put the diesel in the tractor. I meant to check the transmission oil before I started it, but I forgot.

I’m putting the diesel in here. 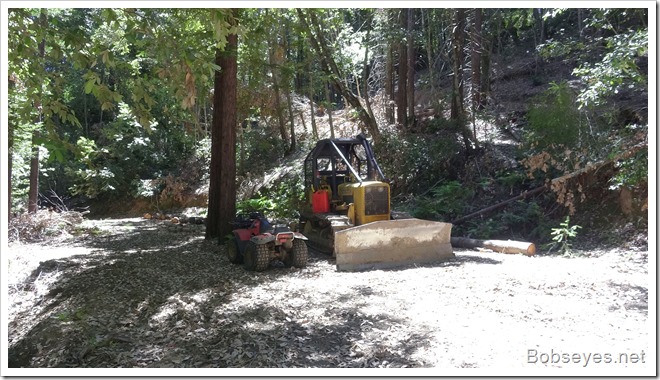 My brother Barry showed up on his motorcycle because we had some plans. He needed my quad runner to bring his chainsaws up here to cut some trees for his firewood so he was going to take my quad and leave his motorcycle for me to take home on my return,……………..but. 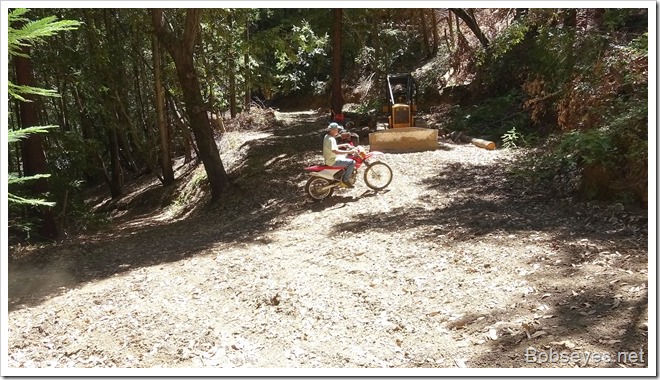 I’m putting in the transmission oil. 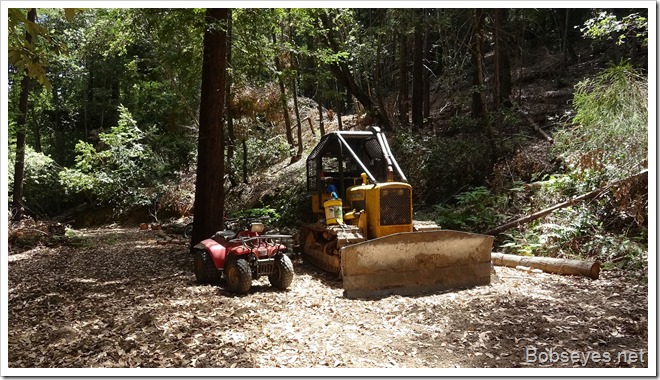 The battery gets charged

Barry showed up again and took the quad back to my house to get his chainsaws while I took the dozer up the road to get the battery charged up. I moved a couple dead trees off the road.

I went on up this road, mostly joy riding to charge the battery. 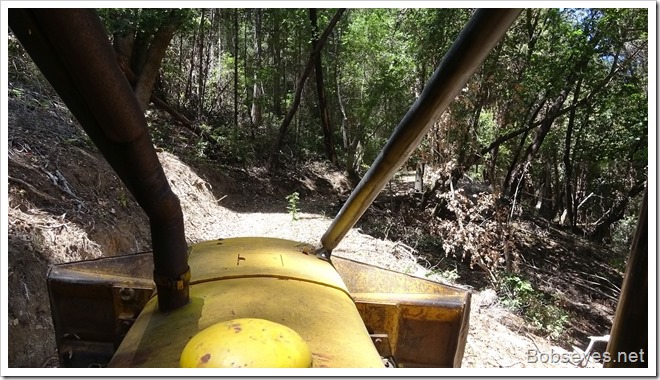 A stump too big

I stopped and took a look at this big fir stump that sled down the hill two winters ago. I decided it was way too big for my little dozer to move. It’s trunk is more than five feet in diameter. I was able to get around it without moving it as the road was wide in this spot. 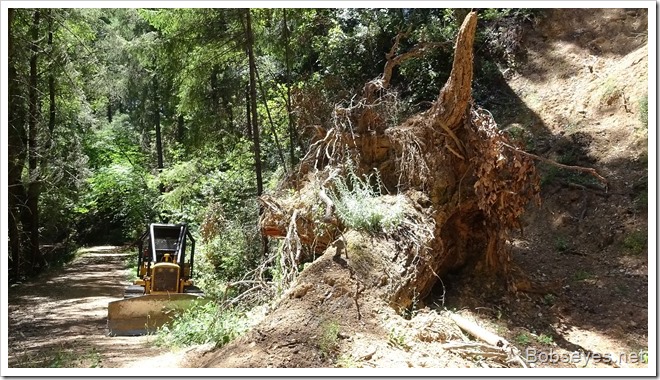 I headed back where Barry was cutting some trees for his firewood and helped him move a couple of them.

He took off for home on my quad as he had the chainsaws and I went back down where I had parked the dozer. His bike was waiting for me so I hopped on and rode on down the hill back to my house. 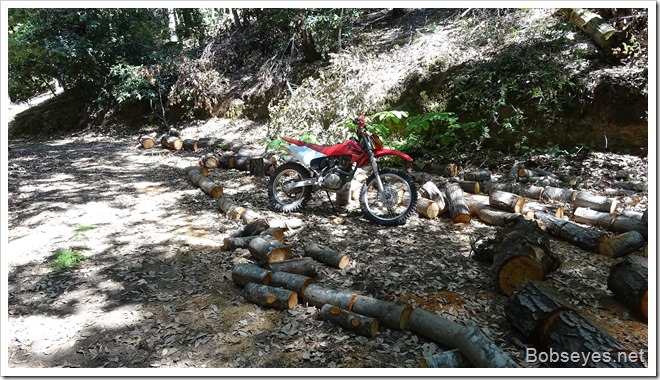 Worked on the mulch boxes

After something to eat and a nap  I went outside to work on my pallet mulch boxes. Now I have two of them. I just need to add the front on the one on the right. I just wired them together with steel wire then turned the dirt on the one on the right and the peeps came over peeping and looking for worms. I took this after they’d left because the automatic sprinkler came on. 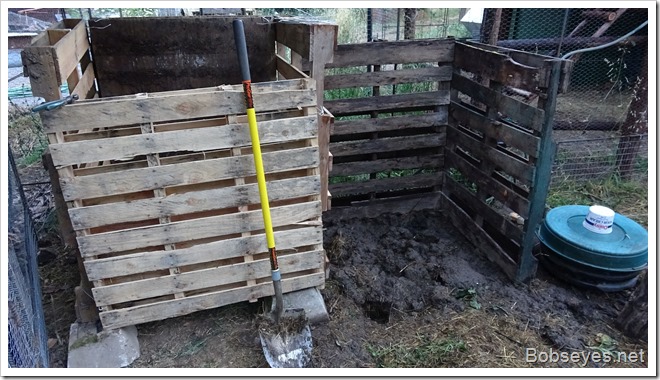 And  tidied up this mess

A bit later I tackled these pieces of roofing metal I had store here. I used some and didn’t wire it back to the wall and the wind knocked them over.  But first I needed to trip the kiwi plant as it overgrowing the area. There’s some wild blackberry vines mixed in there too just for fun, ouch. I also pulled a much of ivy away from the garage that seems to be trying to take over as in climbing the garage wall. 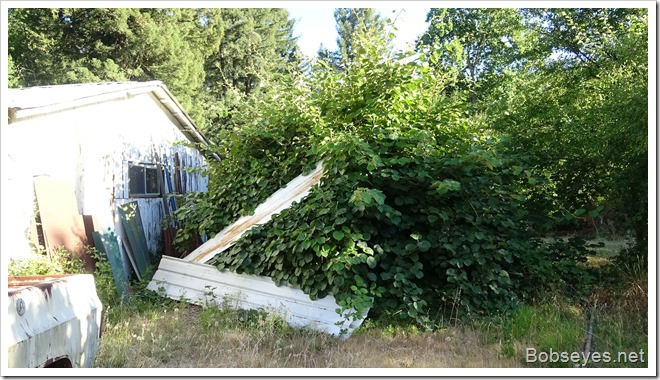 Taming the peeps with worms

After that a bit of chair hopping and just enjoying the rest of the day. I did collect some more worms to hand feed the peeps. When they are hungry enough they will take the worms from my fingers.

I took this picture just before dark of the peeps settling down for the night. They did alright in this spot last night. They are getting weaned from the coop. 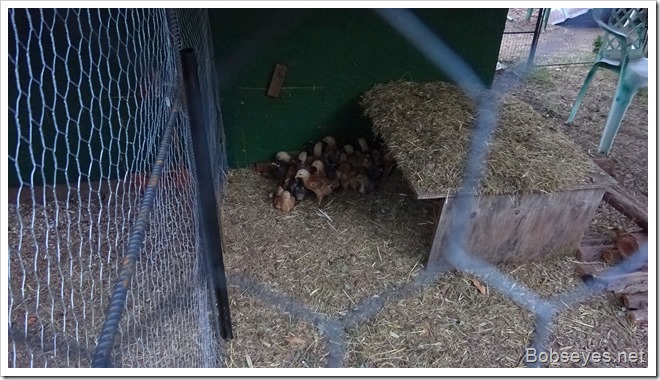 That’s it for another nice day. Hey I got to ride a quad runner, a bulldozer and a motorcycle. That’s more than most guys get to do in one day. :O)