Riding In the Rain, Enjoying the Day, and Ditching the Roads

It was supposed to rain today and it was. 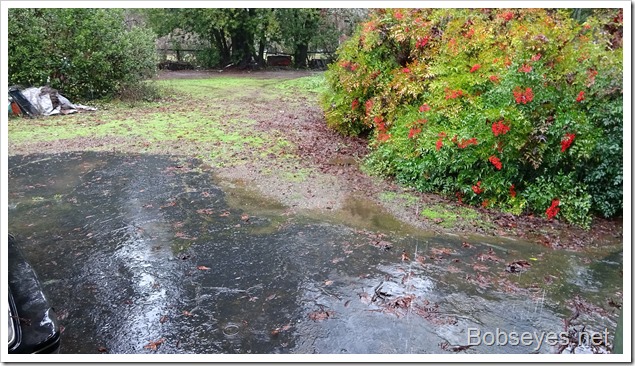 I got the umbrella out and went out to feed the chickens that were out in the rain. They seem not to mind it too much as long as it’s not raining real hard. 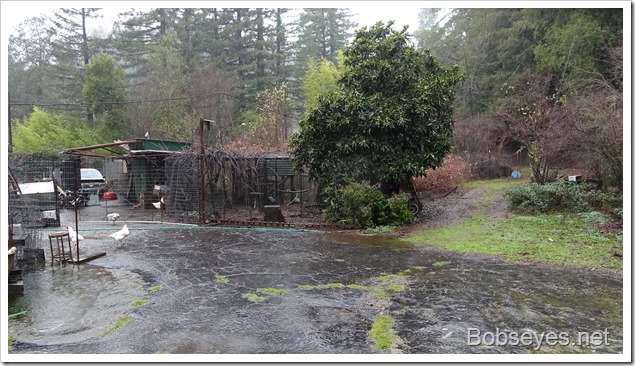 I was waking up, doing my internet stuff, when the power went off. It came back on shortly but then I couldn’t get any internet, nor could I get it on my brother’s cable who lives next door. Hummm.

While I was sitting there pondering what to do, there was a knock at the door. It was my neighbor Dominique, saying a big limb fell out of the big redwood tree by their place where our phone lines and their cable comes in so that’s why no internet. She offered to report it in so it might get fixed eventually. They don’t fix stuff around here very fast like they used to.

I went over to have a look and this is where the big limb fell out of the big tree there and took our lines out. 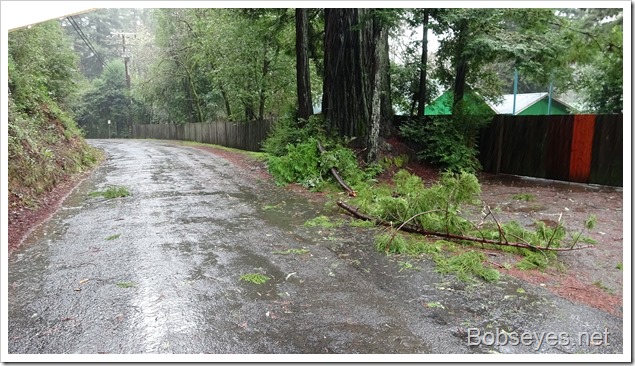 Big redwood trees have big limbs that can do a lot of damage and this one drops one pretty often. See the patch in the fence. 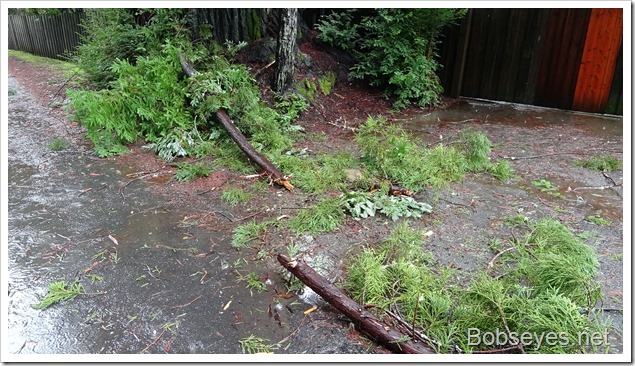 Today was to get my raingear on and take a shovel up into the hills, mostly to enjoy the rain. I wanted to go up when it was going to rain the hardest which the weather guys said would be about 3PM, but as the day progressed they chanced that until after it got dark.

Oh well, get the gear on and go up there anyway, otherwise I would just be sitting around the house as it was raining outside, all day.

I stuffed my non-water proof camera in a pocket hoping it wouldn’t get wet and knowing it would be raining too hard most of the time to use it.

I used to do this all the time as it’s another world up there when it’s raining, especially if it’s raining real hard.

Anyway I got it going about 2 and headed up there in a pretty good rain.

I first went over to our neighbors on the left side and did some ditching on his roads as he doesn’t know what or how to do it. It was raining too hard for pictures at that time. His roads needed quite a bit of work. When it’s raining, the harder the better, it’s easy to see what needs to be drained off the road. The idea is to drain water off the road as often as possible and not to collect it, but to dissipate it in small amounts to keep it from doing damage and washing the roads out.

After that, I rode around our place a bit just enjoying the day. Most the roads on our place are in pretty good shape and don’t wash out, a lot because they are what’s called out-sloping. That’s where the outer edge of the roads slope to the outer edge, so all the water runs off and doesn’t collect and do damage.

Eventually I ended up on our neighbor’s place on the right and stopped here to put in that ditch behind the quad to keep this water from going down the road. I did a bunch more ditching for them off to the left, out of sight, before continuing on up the road. 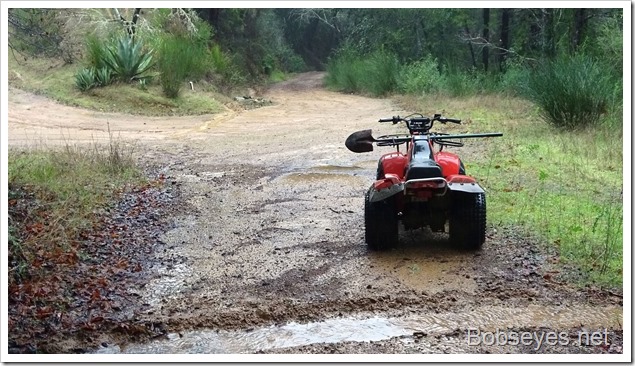 I didn’t go far past her place before turning around and going back and turning down Clayton’s road. The dirt bikes had made too much of a trail down the road and it was running quite a bit of water, so I ditched most of it. It’s fairly easy to ditch as most of the road is fairly soft stuff. 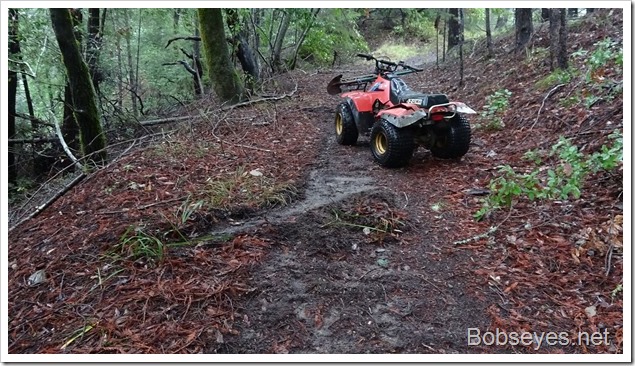 By now, I was getting pretty wet from the waist down and my water proof shoes were full of water, so I started towards home, but no hurry as it wasn’t that cold out.

I went on down this trail through the redwood trees, just because I knew it would be a nice ride. I knew there would be nothing that needed fixed and there wasn’t. 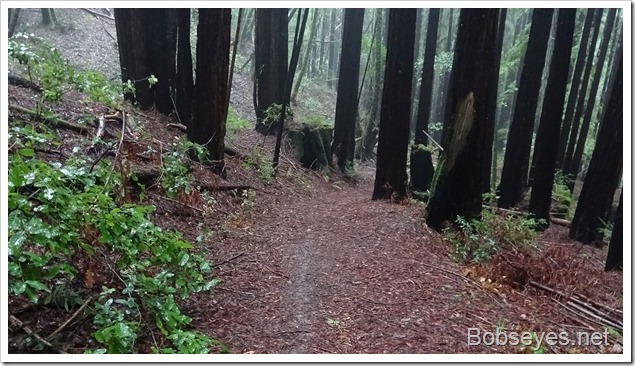 The creek crossings on that trail were holding up well too, so I just puttzed along. 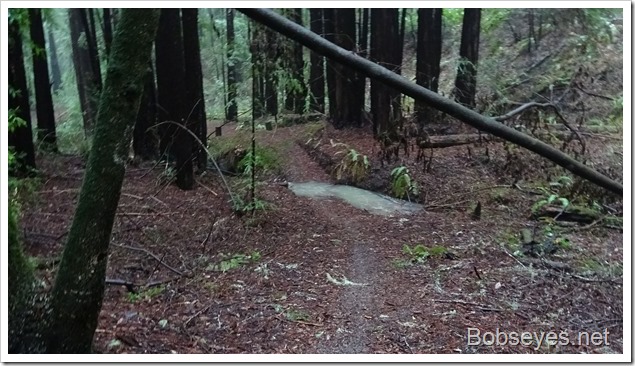 I was home shortly and replaced my wet clothing with dry stuff and took it easy the rest of the day.

Now, I need to go over to a neighbor’s place that isn’t home but has internet and sit at the back door and see if I have the name and password right and can get on to post this and check my email.

(Visited 52 times, 1 visits today)
This entry was posted in Uncategorized and tagged Forest road sork in the rain, riding in the rain. Bookmark the permalink.

1 Response to Riding In the Rain, Enjoying the Day, and Ditching the Roads