It rained off and on all last night and it’s doing the same today. I hung around camp until about noon, then drove to town, Port Orford. On the way in I’d seen a road called the Cemetery loop, so I took it to check it out. I found the cemetery, but it started pouring down rain just as I arrived, so I didn’t stop, but I noted there was a fairly nice place to camp in the parking lot there with no signs that said no overnight stuff. I’ll stop back in when it’s not raining to have a look at some of the graves and do some reflecting.

The loop road came out just at the edge of town. I decided to drove on down to the Port Orford Harbor to see if anything was going on and there wasn’t.

The wind was blowing fairly  hard and all the boat stuff was closed for the day.

Here’s what the parking lot of Port Orford Harbor looked like. 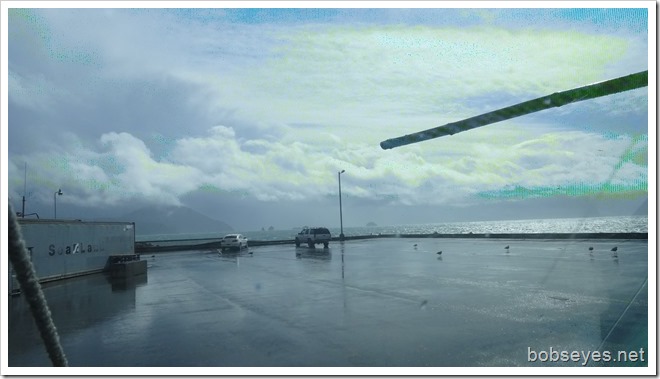 I turned around and drove back up the hill to get picture of the Port Orford Harbor area which looked like this. 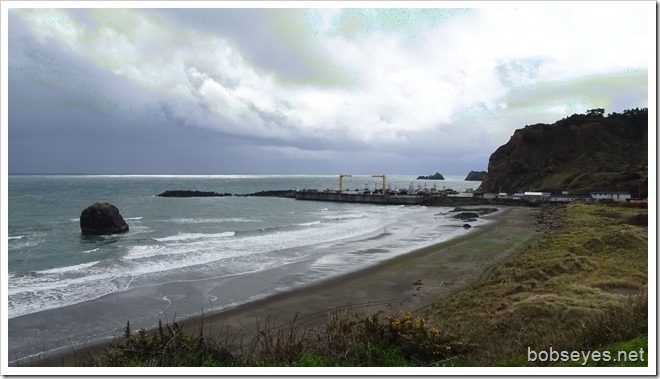 From there I went over to the library to check the internet. Steve had a message saying he was going to drive up to Bandon which is just north of here if I wanted to come along, so I drove on over to the Elk River RV place where is was staying and joined him.

Steve and I drive up to Bandon

Shortly we headed on up to the Bandon area so Steve could do some shopping. I have everything I need so just tagged along for the ride. It rained most of the way and was still raining on the way back.

Still raining as I write

It was after four PM when we got back so I left Steve and headed on over to the library where I’m writing this post sitting out in my van.

I expect more rain tomorrow so I’ll be taking it easy and maybe go for a little walk if the rain lets up a bit otherwise I’ll just sit tight while rain gets it’s stuff done.

That was it for my day.