I didn’t start out the day thinking I’d be doing fire patrol, but that’s a lot of what I did by accident.

I heard a lot of backup beeping before I got up and some clunking so once I got up I peaked over the neighbor’s fence to see what was going on. They where picking apples for making apple juice. 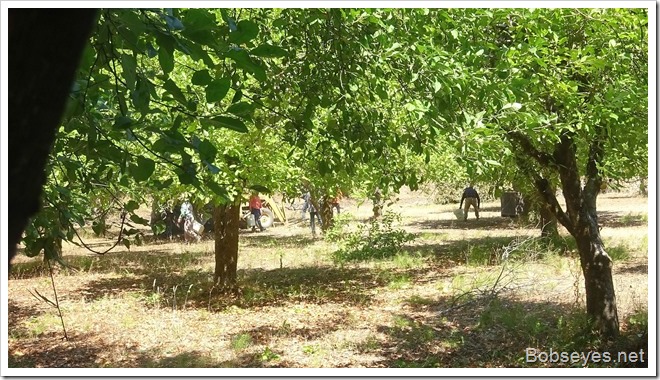 I  also heard a lot of fire trucks and equipment going by and headed up into the hills so something was going on.

Winds picking up this afternoon

I went over to my brother Tom’s to see what he knew about what’s going on. He said there’s big wind event starting this afternoon so the fire guys where going out to watch for fire flare ups that the wind  might cause. Well that meant I should hop on the dirt bike and ride up into the hills to check things out just for  fun of course.

I was having a nice chat with these guys when this fire truck pulls up and backs in to park so I chatted with them too. They were from the governors office what ever that is. And yes they were watching for flare ups and putting them out when they saw smoke. 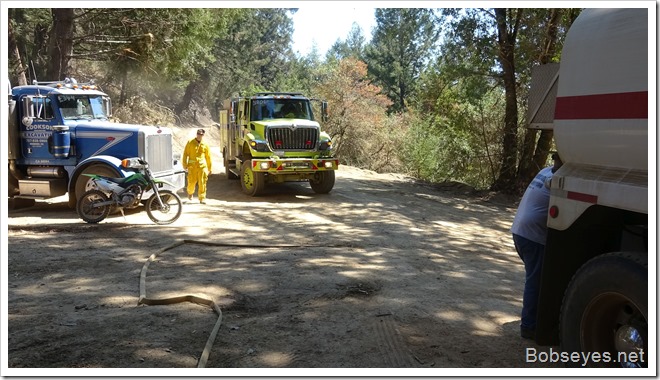 Catching up with Robert

I’ve been trying to catch Robert at home up in the hills the last few days but I’ve only been able to catch his wife as Robert was always out playing. He rides a dirt bike too.

I found this fire truck in their driveway parked. 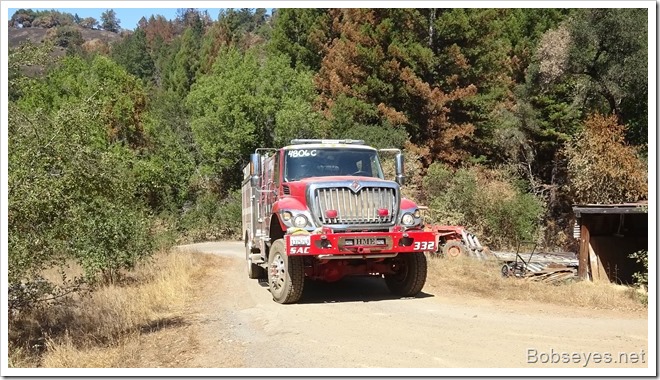 Fire in the tree trunk

I went down to the house and found his wife home again. Turns out Robert was down below his house with the fire guys and some tree fallers falling a big redwood tree that had a fire in it’s trunk

We could hear the chainsaws working as it took two of them running at the same time to get this one down.

When it fell it made a huge noise and a lot of dust so I  had to go down there to see what was going on. The fire guys are here on this old road and the tree cutters are off in the trees on the right. 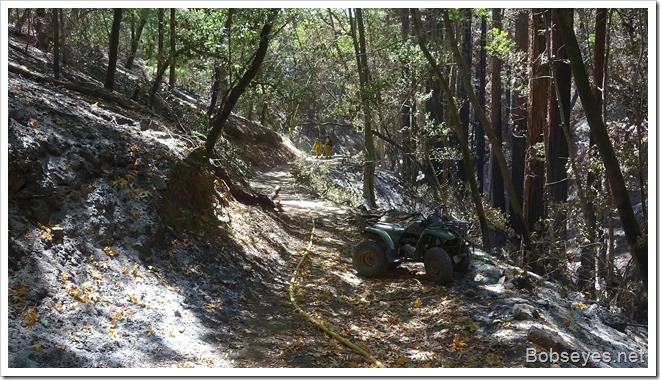 I could see the tree fallers across the ravine. 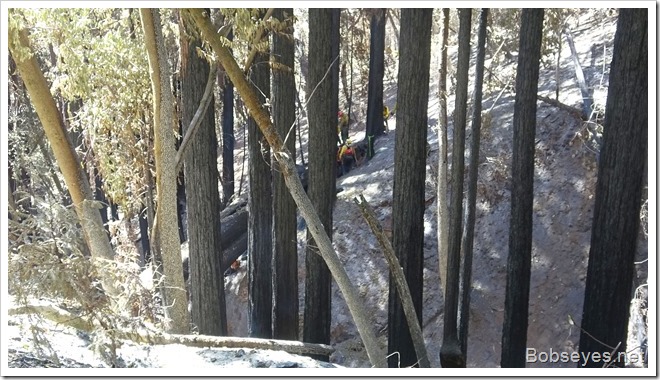 There’s the tree they fell to get to the fire in the bottom and I think they had the fire out when I got there as I didn’t see any smoke. 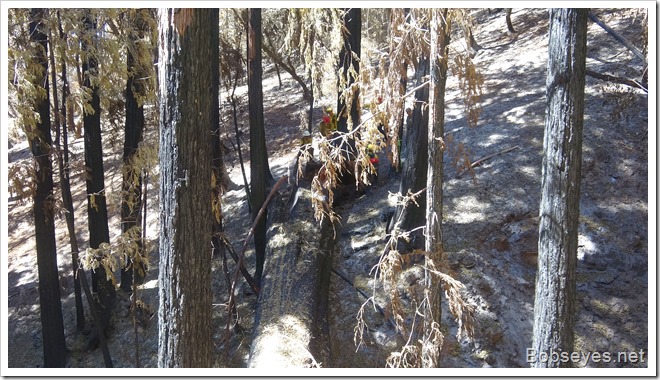 There’s the tree fallers and some fire fighters by the stump of the big redwood tree down in front of them. 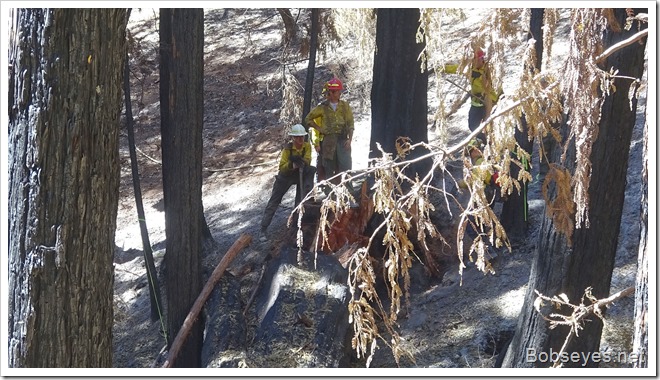 There’s Robert helping the guys. He likes to be in the middle of things, helping out when he can. 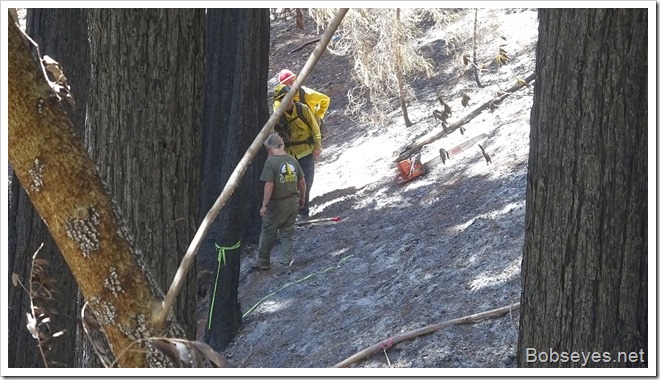 I made my way back up the hill and had a nice chat with his wife. I gave her all of my forest fire pictures and she game me some stuff on my family history.  Eventually the guys all came up from the bottom where his wife passed out cold glasses of water and we all shot the bull for a bit, everyone was real friendly.

I wanted to go over to the Hermit’s place and check out his water spring and dig it out a little so I headed down the road and spotted a small stump on fire on the side of the road and found a fire truck further down the road and told them about it so they could put it out as with the wind coming up it could cause smoldering fires to ignite and get another forest fire going. The fire guy said thanks and said he’d take care of it so I rode on down the hill headed for the Hermit’s house.

I rode up this road where the fire had burned though a few days or so ago. Later when I came back this way I spotted some smoke off to the right.

Getting up to the Hermit’s spring

The Hermit hasn’t been able to get home yet but no matter I knew what I wanted to do so I found a shovel by his house and headed up the hill towards his spring box up past the water tanks. It was steep going up the hill. 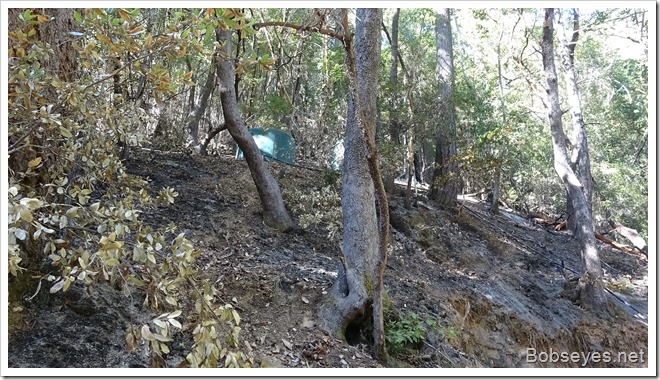 I had to use the shovel on the trail going up as it was real narrow, almost not there and if I didn’t widen it just a bit I could slide down and get hurt.

This is looking at the trail I came up and widened with the shovel just enough to get by without falling off it. The trail is on the right going down. 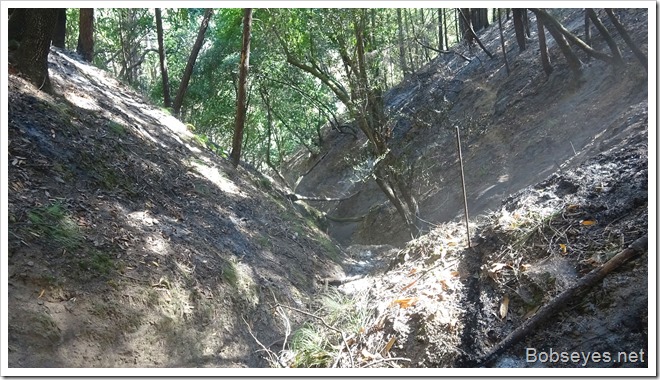 Digging out the spring box and lots of dust

His spring box is under all this dirt that came down when the fire went through. It melted his plastic pipe and buried his spring box and likely melted that too.  I figured I had a couple yards of dirt and rock to move and I’d have to move it twice go get it out of the way so I got with the digging but it was making a lot of dust as it was real dry dirt with fire soot in it. The dust was blowing up into the big trees and might look like smoke from a distance and I didn’t want the fire guys coming up here for a false alarm. 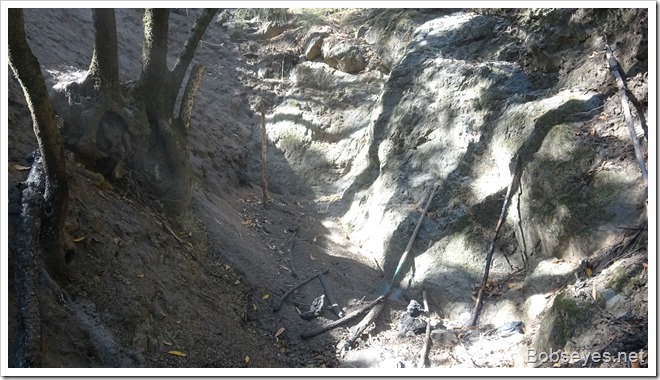 I’d dig and make a lot of dust then have to rest and let the dust clear and then do it again.

This is just getting started. There’s a spring box under there somewhere. 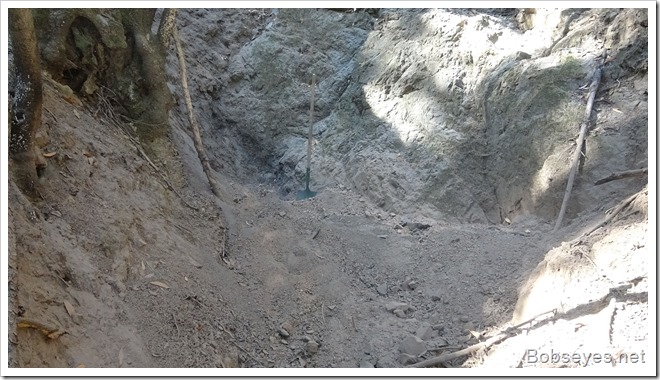 Now I’m 73 and my mind wants to do hard work but my body can only do so much and I got real pooped moving the heavy dusty dirt and it was real hot today but I kept at it until I could hardly move and I was a bit wobbly and was concerned about getting back down the trail without slipping and hurting myself.

I knew I was close to the spring box but had to stop for another time. At least I know what I’m in for now.

I had to leave it here for next time. 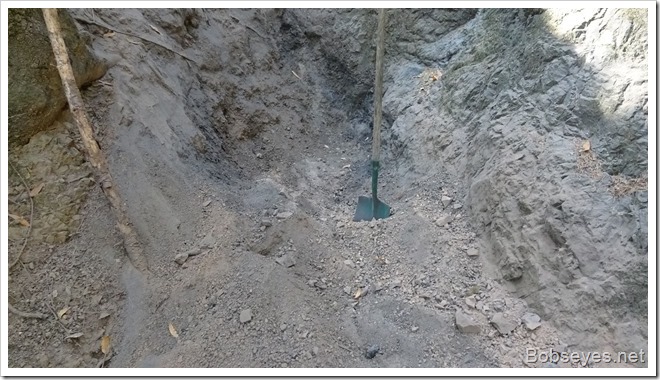 I hopped back on the dirt bike and started down the state park road headed towards home when I ran into a flock of wild turkeys. I’ve been seeing a lot of wild turkeys after the burn as the fire burnt up a lot of their grassy habitat. 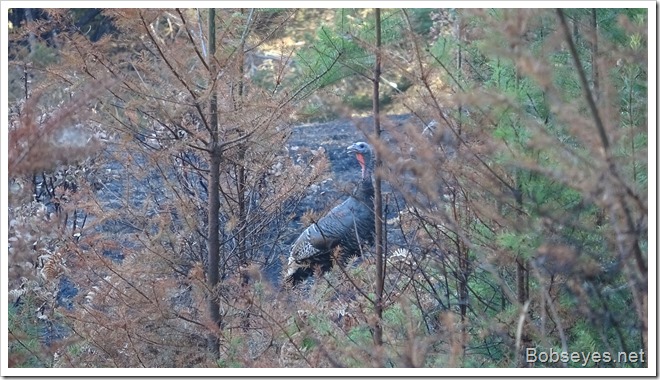 More fire patrolling and the winds picking up

On the way down the road I spotted this smoke with no one around so I needed to tell someone about it as with the wind they were putting these thing out before the wind gets them. The wind was just coming up that’s why the smoke. 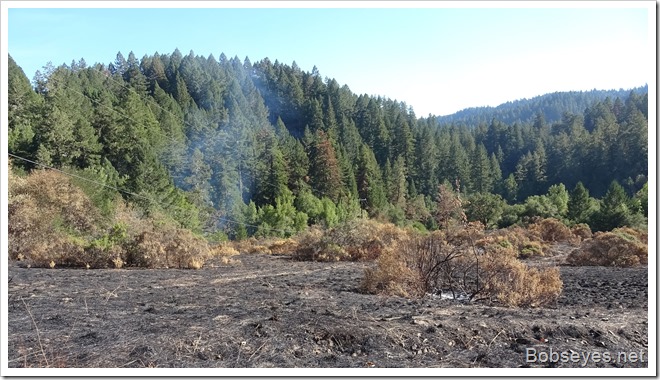 So I rode down into the park and found some fire trucks and told them what I knew and I took off back up to the smoke to make sure they found it when they came up. I waited but no one showed up so I rode the dirt bike down the grassy hill side back into the park where the fire trucks had been but were now gone from.

About that time two park trucks went by headed up the hill road so I fell in behind then and was able to cut the last truck off on a turn so I could talk with the nice young lady driving it.

Said she’d get on her radio and report it so I rode back up the road where you could see the smoke and ran into the fire trucks I talked to earlier. They’d driven right by the fire as at the moment the smoke was down.

The two park trucks pulled up and about that time the smoke flared up and they could see it.

It was in the park so was mostly a park problem and it was in a burned out area so the fire guys left for the park guys to deal with it.

If you are a butthead you just are eh

Right away the park guy came over and started in on me and was a real
butthead for sure.

He said the fire was in a burned area and he wasn’t too concerned with it which was wrong of him as with the wind up any fire should be considered dangerous and could get the forest fire going again.

He was doing what I call a head power trip, not using his head and action like an idiot. Sorry but that’s the best I can do for stupid people like that.

The lady was real nice and just stood and listened to him start in on  me. I explained I was helping the fire commanders and neighbors and he started telling me if I was to run into someone on the road they could get sued and telling me the big equipment was real dangerous. I told him I was up with the dozers during the fire and he just started again. I told him I was a different type of person and that was no concern of mine as I was though a lot worse as I spent two years in Vietnam getting fired upon. He started again and I’d had enough from this jerk and he was, as he wouldn’t shut up.

So I said, Stop, stop, just stop. I said I’m 73 years old and have had enough of this shit and just don’t need it. That finally shut him up.

The lady got it right

The nice lady who quietly listened to these goings on said what the Dickhead should of said. I’m going to walk in and check the fire out.

As it was leaving  I apologized for the trouble and said I’m now going to ride my dirt bike through the park without a helmet because when I learned to ride dirt bikes they didn’t have much in helmets and I wasn’t used to them although I do think they can be useful. Like everything they do have some drawbacks like reducing your hearing and limiting your vision and being hot.

Through all of this I was mostly nice, but he did try my patience.

I rode on down through the park getting some waves from the guys at the park headquarters as I rode by.

The rest of the day I spent taking care of my chickens and chair hopping around the yard until dark. I let the chickens out in the yard in the evening. Today I let the little ones out too as they are getting bigger and it’s nice to be out of they pen and into new territory where there’s things to eat. 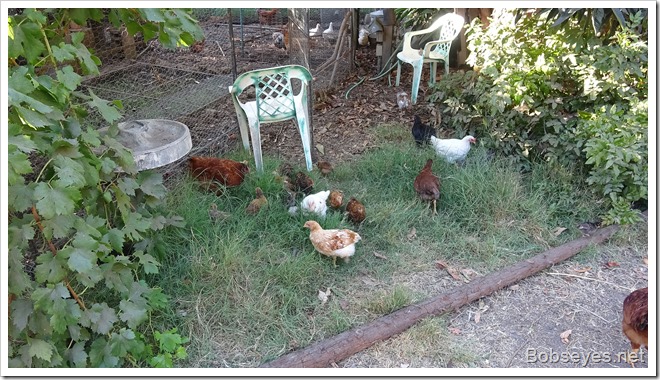 All and all almost all of the guys I’ve run into on this forest fire have been super nice and there were only a couple with their heads up their butts.

Mostly I had a real  productive day, especially visiting with some of my neighbors and getting the Hermit’s spring started on digging it out.

3 Responses to Reporting Fire Flare Ups and a Butthead