Repairing the Old Metal Roof On My House

Well, it was for a good long time, but a couple sheets finally rusted through, so now I have to pay for it.

Normally the metal roof doesn’t rust out like that when it’s installed on a roof. When it’s on the ground stacked and gets wet, it forms a type of battery with each sheet being a cell and corrodes rather fast. The remedy is to store it standing upright one end so no water stays between each sheet. I have some stored like that and that’s where I got the materials to do the repair.

I removed two sheets of it after removing a bunch of flashings where the roof changes pitch. 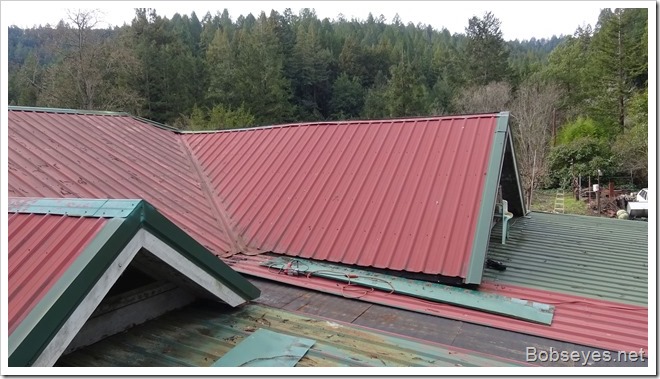 The hardest part was getting the metal flashings back under the metal sheets as they kept  hanging up on stuff under the sheets, but I finally got the flashing back on and screwed the new metal sheets on with a special screw gun used for this purpose. The roof looks dirty and old because it is. The black is mostly from pollen from all the big trees in the forest. It may not look pretty, but like most older things, it’s function that counts. And at my age, not having all the same color is no matter to me. I just want it to last until I’m gone. :O)

Just finishing up in this picture. 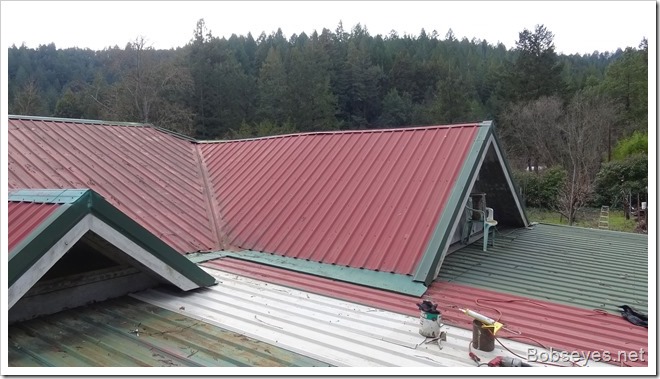 Big trees are starting to drop their pollen

About this time of year the big trees drop tons of pollen and eventually it molds turning it black. I noticed the redwood trees are starting to drop pollen yesterday. They drop so much of the stuff, I’m surprised people can live in the forest when this happens but somehow we do. When the wind blows, it blows off clouds of the stuff.

That pretty  much took most of the day and when I was done I barely had enough energy to pick up the tools and materials and put them away, but I took my time and got it all down.