Today I decided I better get with the front automatic gate opener repair before the holiday got into full swing as I might have to go to the shopping centers to get a new operator arm if the one I had was bent after the damage to it during the recent fire.

I got all the parts together. I need to put new brackets on that bent rusty bracket. I did notice the newer brackets were a bit beefier than the old ones which is good as the old ones were bending a little during the gate operation which made things a bit on the sloppy side. 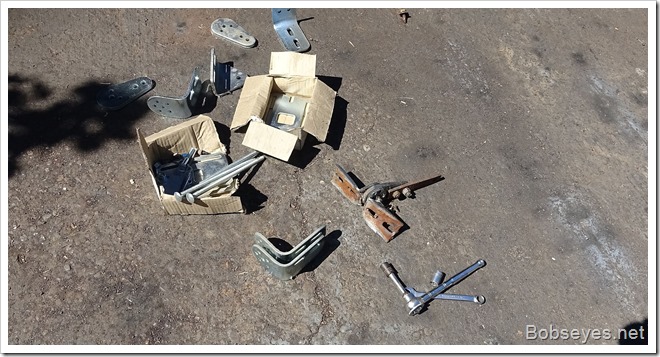 I got my wrenches out and made up the bracket. 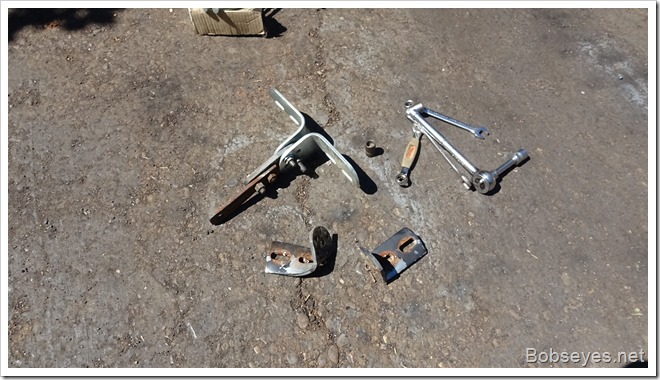 Next I got the wheelbarrow out and filled it with the tools I thought I would need at the gate to repair the broken bolts in the metal pipe that broke off. Of course I didn’t have all what I needed and had to make several more trips to get stuff.

Bolts broken off that need to come out

Here’s the broken bolts that turned out to be harder to get out than I thought they would. That’s because I’d used automotive bolts that were case hardened which meant the outside of the bolts were too hard to drill out. I could only drill the center of the bolts out and not even all of that as the the drill bit wouldn’t break through the  pointed bolt tip as it was too hard, so that didn’t work. 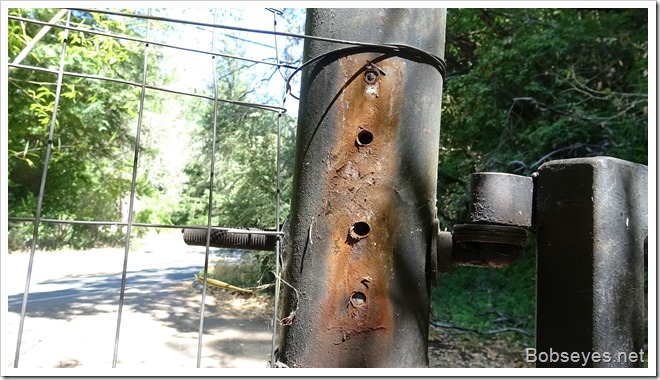 I could of gotten my hot  torch out to soften the bolts but then I might start a fire so I decided against that.

Drilling new holes and tapping them out

What I finally ended up doing was drilling new holes right next to the stuck ones, then I tapped them out to three eights inch course threads.

Here’s the finished product bolted in place. Because of the beefier new parts the mount is sturdier than the the old parts so that is good. 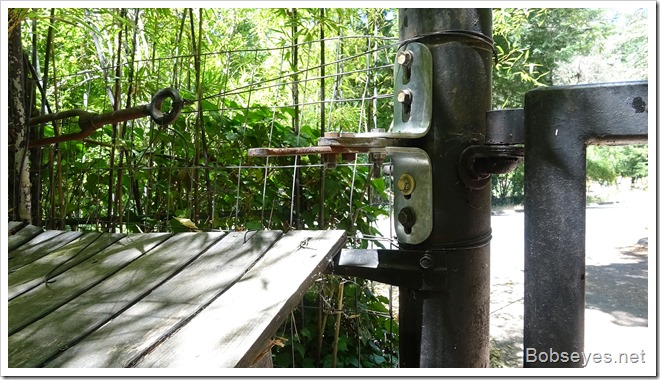 I next mounted the operator arm that opens and closes the gate to see if it was damaged or not. Unfortunately the actuating screw was bent so the thing was real wobbly. But the new mount turned out to be much sturdier than the old one in action. Always good to improve things. 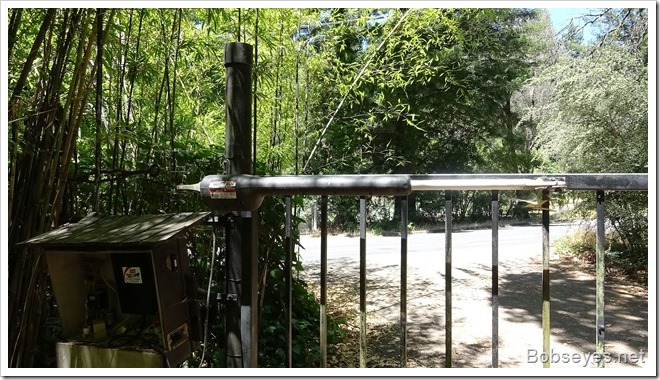 Getting a new actuator arm

That  meant I was going to have to go to the shopping centers and look for a new operating arm to replace the defective one. I went to Tractor Supply first. They carried Mighty Mule stuff, but they didn’t have any operating arms of the size I needed so I went to the next closest store which was a Home Depot.

I found what I needed and headed out to visit with my friend Joe who lives close by and is on the way home.

I found Joe working in his front yard welding up a four wheeler trailer for some guy.

He said he was real happy with his garden this year as he’d redesigned it so we headed to the garden to have a look.

Here’s his garden as we headed into it. 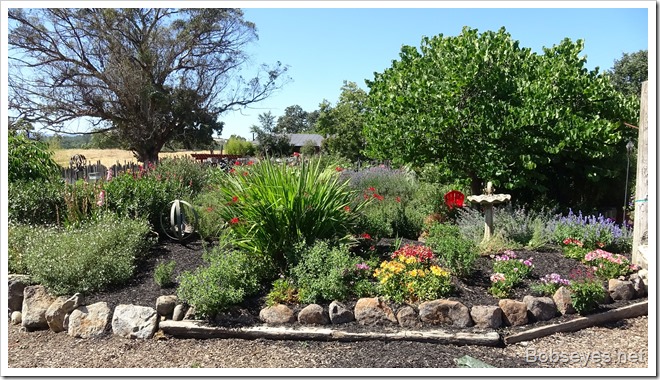 All his plants were really growing away, way ahead of my garden.

He had something interesting, a coffee bean path, actually more than one of  them. He got a bunch of coffee beans from a company that makes coffee roosting machines that they have to test with real beans so he used a bunch of them in  his garden. He said they are low grade beans. I was going to take some to try, but forgot. 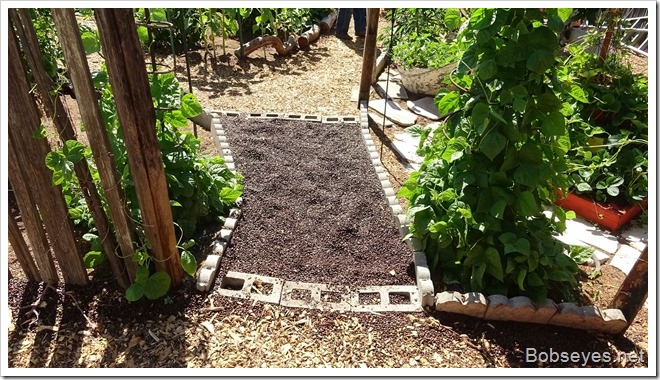 Here’s some more of the coffee beans and you can see his vegetables are really growing away. 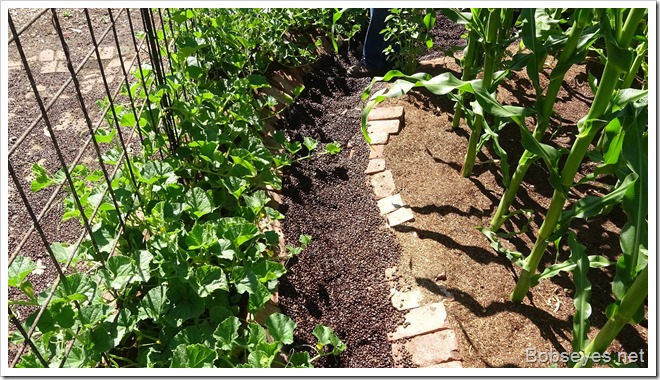 Joe knows how to grow stuff

Here’s Joe showing me around the garden. 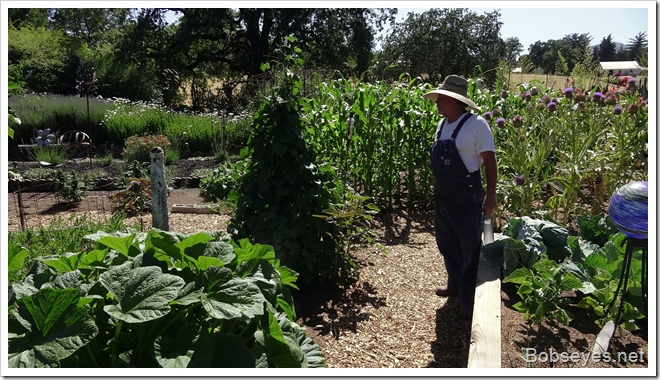 Joe’s dog followed us around. 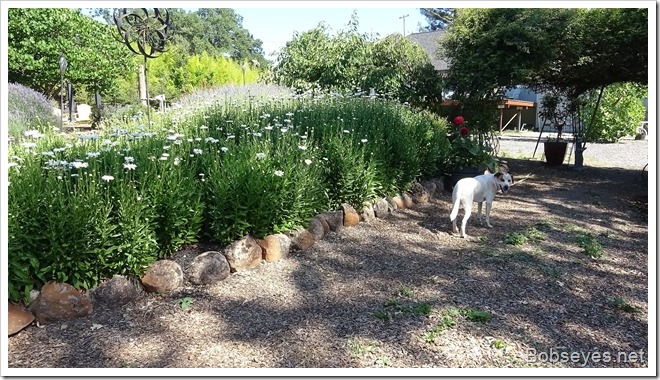 Boy did I need a nap

I left Joe’s for home and needed a nap when I got there.

After the nap I was still not feeling like working so I read the new gate opener manuals which were pretty much the same as the old gate opener.

Worms for the peeps

I checked on  my peeps and dug them some big ol worms which they really seem to enjoy. One worm is enough to fill a little guy up for awhile.

And blueberries for me

I hit the blueberry patch to eat some of them a couple times.

They are really starting to ripen up now. I need to get in there and pick some for the freezer.

Ripe blueberries in the blueberry patch. 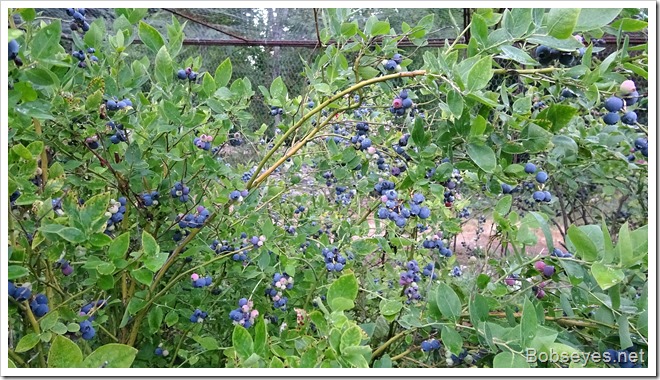 Some of the berries are fairly big. I seem to reach for the bigger ones first as I eat them and I know how to make them disappear. :O) 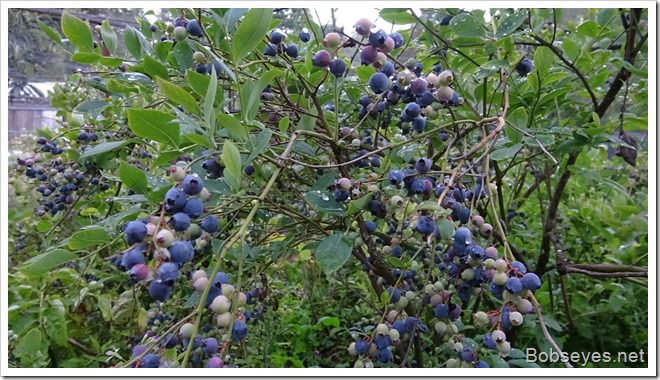