I found my brother Barry’s truck parked by my garage when I went out to feed the chickens this morning.

He had his dirt bike and something else too. He had his riding mower deck in the back of his truck that needed some welding.

I fed the chickens and got started doing the welding repairs on the deck. 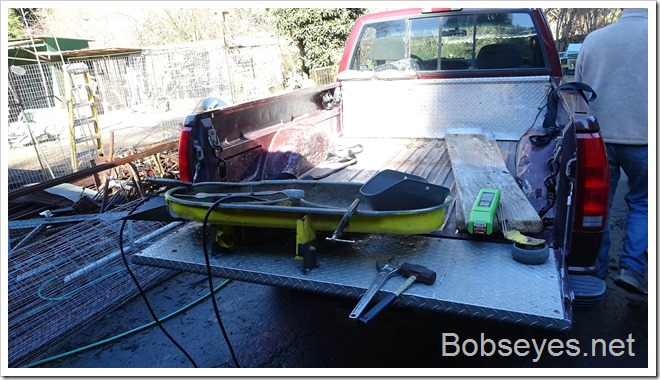 I started by welding the brace back together after I clamped it down to hold it in place while I welded it up. 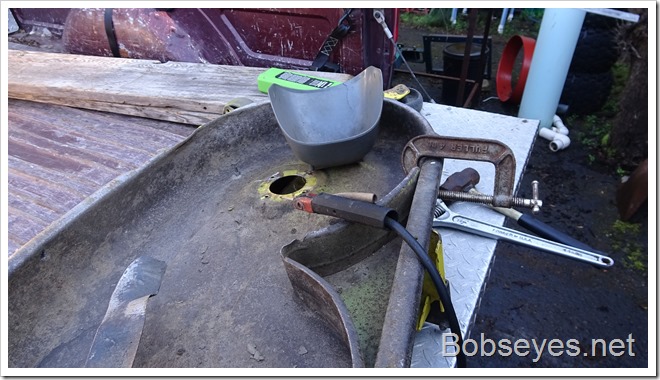 Then I had to weld the wheel brace back on as he had broken it off completely. 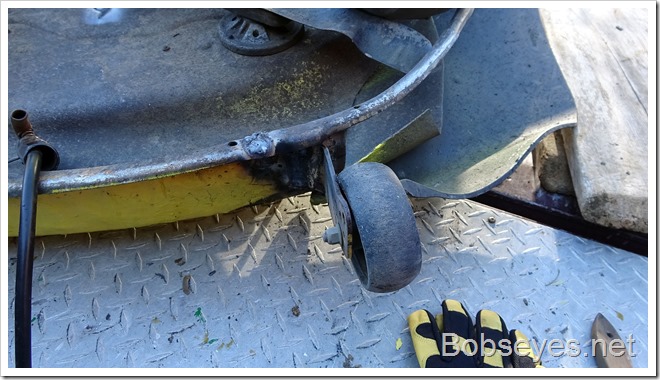 I think that all took about an hour so once that was done we jumped on our dirt bikes and headed up into the hills for a couple of hours of riding around the property.

We rode down to this point to check it out as it was an area that I’d de-brushed recently with the dozer. 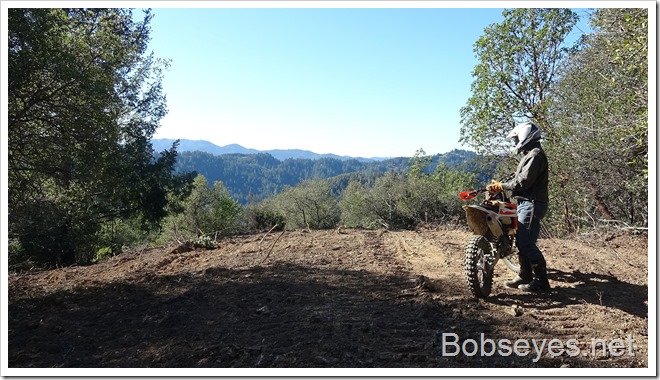 Then we rode up this trail through the madrone trees. I’d cleared this trail recently by hand, well, with a chain saw really. 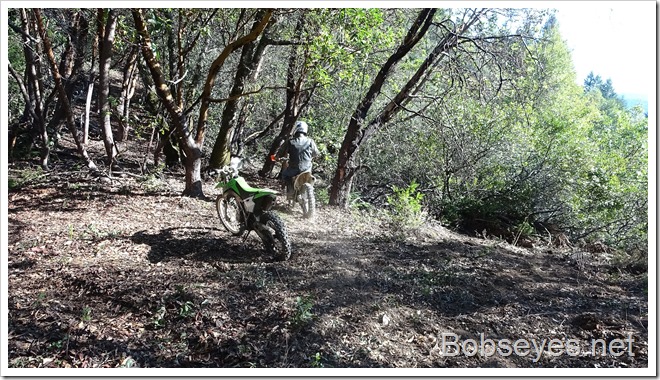 Then we took off up this road with Barry in the lead. 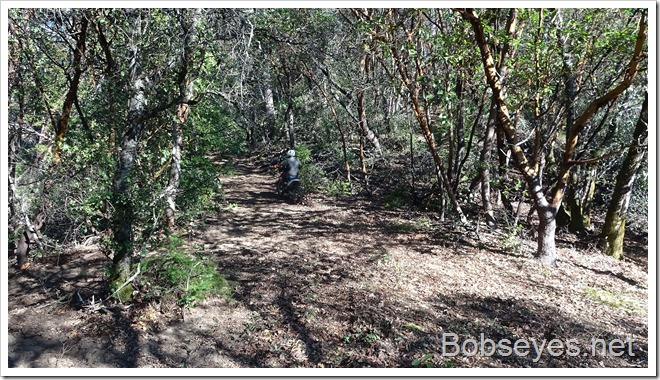 We rode around our place and some on the neighbor’s place too until we arrived at the Top of the World where we stopped for a good break for a bit to enjoy the nice day. 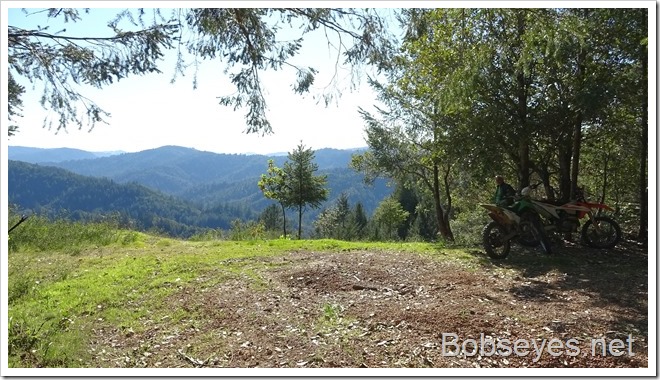 The view from the Top of the World, looking mostly south. 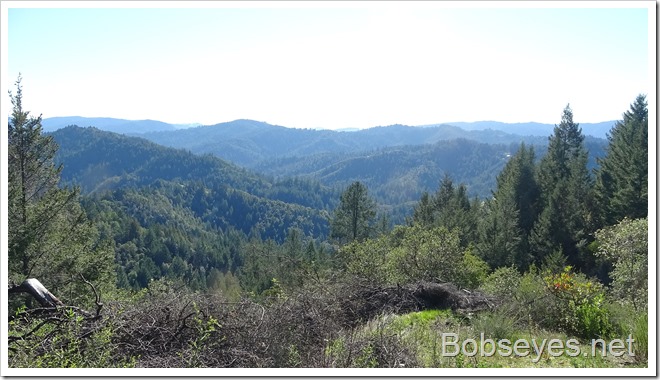 After a good break we took off again to do some more riding.

Since Barry rides first he ends up removing things off the road so we can pass while I watch and take a picture. This log was laying across the road so he cleared it enough to pass on by. 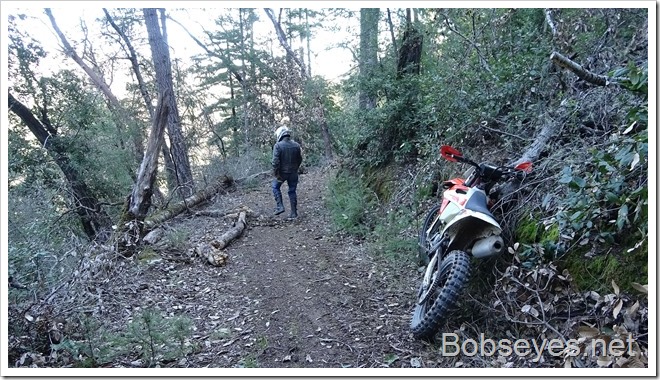 We rode around some more until we had taken most all of the roads, some more than once and then stopped here at our spring to get a drink of water. 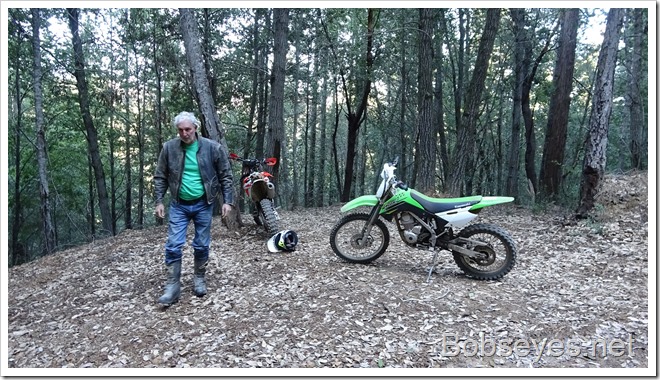 From there we headed back to  my house going the long way.

Showing off my drone

I had told Barry when we got back to my house I’d show him how my drone works and let him try flying it so I got the drone stuff out.

Messed up the software

Last night I tried to download and install some new drone software updates and I was pretty sure I messed things up doing that.

So sure enough when I tried to show him the drone, the drone’s camera software didn’t work, but never the less I could still demo how to fly the drone.

After a quick demo I gave him the controls and told him what to do with the joy sticks so he could try flying it as it’s really pretty easy to do. Just don’t go too far away, I said.

That worked out well and he was flying in a short time. I think there may be a drone in Barry’s near future.

He took off for home and the day was almost over.

Once I was in the house I started trying to install the drone software again in my cell phone. I could download it, but I couldn’t find the install button so I went next door to ask Dominic how to do it as she’s pretty good with cell phones and I am not.

But she tried and tried but couldn’t find the install button either.

I went back home and started looking on the internet and finally found a video that said I had to log in on their site to make it work, so I logged on and agreed to a bunch of stuff and an install button finally popped up so I got it installed and working again.

Apparently one has to log on and do it this way as their site records a log on where you fly so there is a legal thing going on. Why don’t they just tell one so things aren’t so difficult.

Anyway I got the new updated software installed and all is well.

(Visited 118 times, 1 visits today)
This entry was posted in Uncategorized and tagged dirt bike ride in the forest, mower repairs. Bookmark the permalink.