A walk and how I find camp spots

I was sitting in my van at Steve’s place at the Elk River RV Campground when Rene who was also staying at Steve’s walked by. I said I’m getting tired of just sitting around, bored.

So he said how about going for a walk down by the Sixes River’s Mouth. He said with the river’s mouth closed water is backed up on the trail and we’ll need boots if I wanted to go.

I didn’t have boots, but I did have a pair of water shoes that are sorta boots, so I said sure, a little water won’t hurt me even if I do get wet.

So we drove down to by where the Hughes House is in the Cape Blanco State Park and drove down to the trailhead by the boat launch. We started off here headed to the ocean just up ahead.

Here’s Rene heading off. It’s a bit windy and cool and the fog is hiding the ocean. 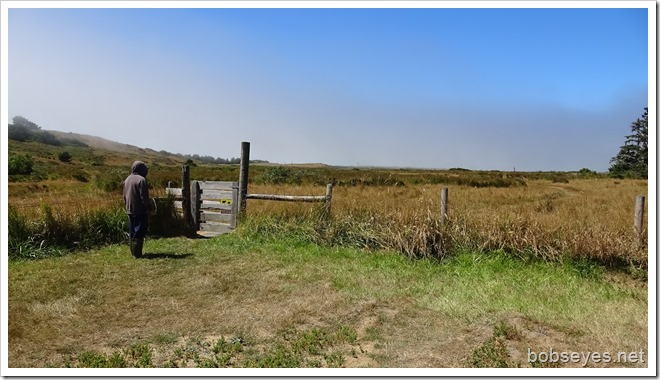 The trail started out dry and easy going. 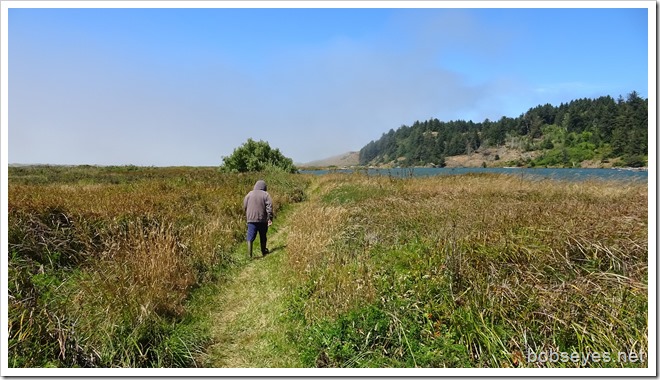 But a bit wet

But eventually we hit water on the trail. Some of it Rene could walk through with his boots, but some,  like this spot was deeper than he had boots for so he’s pointing and saying let’s try walking around it over there. 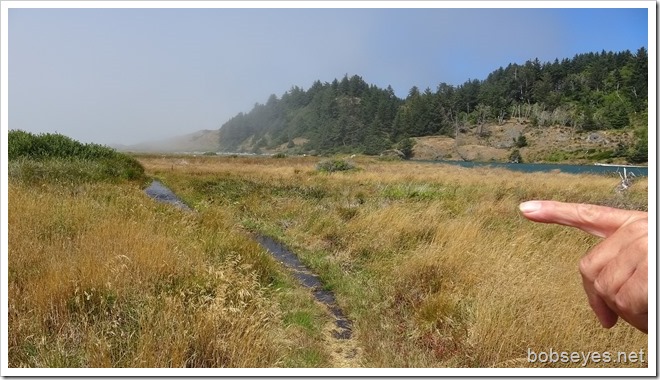 We got around the water and continued on a bit and thought maybe we’d make it to the ocean. 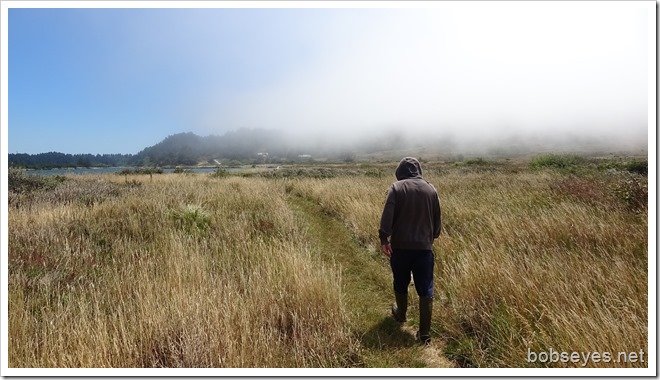 We didn’t make it

We made it to just past here and ran into just too much water to get through with his boots so we turned around and tried to trace the path we had taken back to the car. That’s the backed up Sixes River there looking up river. The fog is waffling around in the wind. 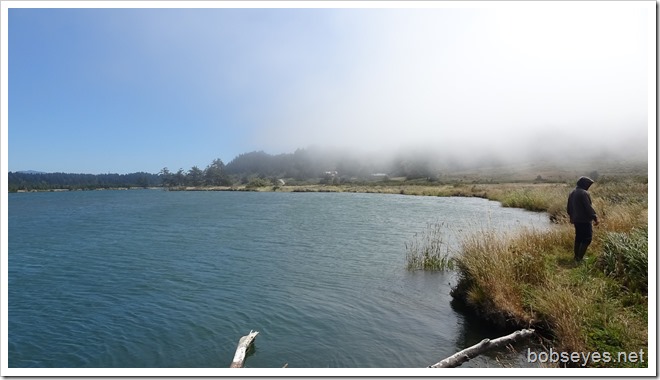 Wading in the water

Headed back we had to make it through all the wet spots. Here’s Rene splashing away. 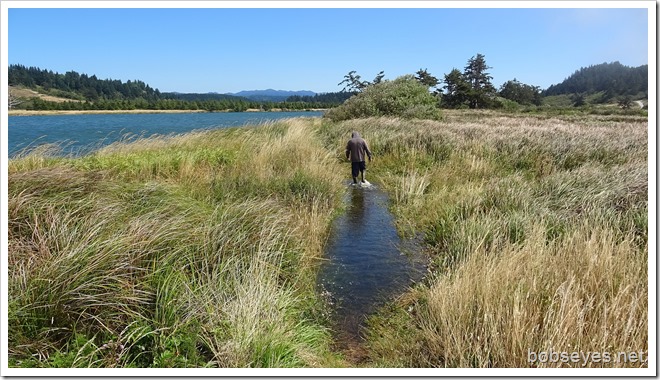 With my water shoes I could just walk through most places and my pants legs would just get a bit wetter. Rene had to be a bit more careful. He’s balancing on a log in this spot and trying to stay dry which he did. 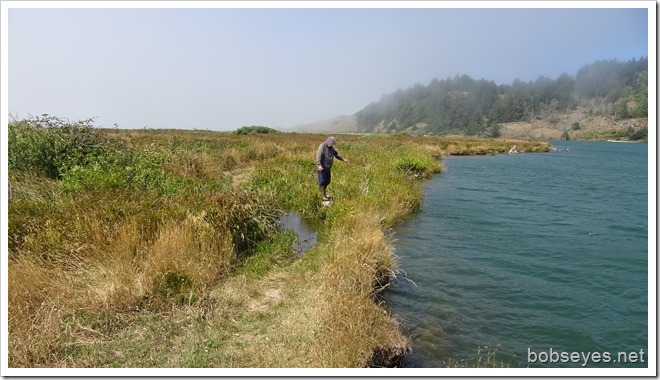 Always good to get some exercise

We didn’t get as far as we had hoped but just the same we did get some much needed exercise.

We headed on back to the Elk River RV Campground and both decided a nap would be good. The ocean seems to make one want a nap. Just something about it.

I cooked some dinner and around 6 I said my goodbyes and headed south down 101.

I  had about a half hour to travel down to a camp spot I know just below Humbug State Park.

It’s a road rock quarry I’ve camped at before. It overlooks the ocean nicely and is fairly quiet. 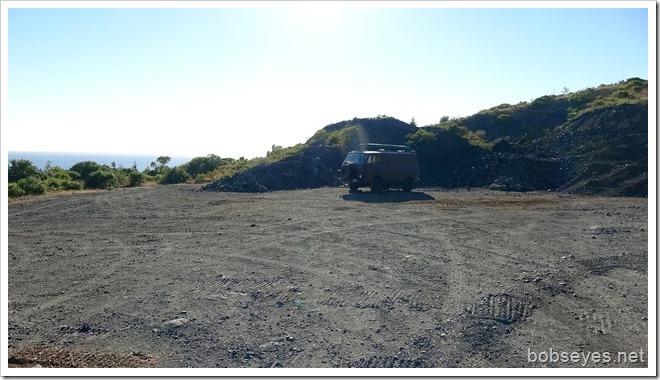 How do I find a camp spot

This would be a good time to answer Patsy’s question in comments a week or so ago.

It is unbelievable that you can just pull off on any dirt road and park for the night. Here in Canada, the property owners would be on your tail asking you to move. How do you know ‘where’ you can park?

Well to start with, there’s a lot of government property in the western states. Bureau of land Management and National Forest properties we are allowed to stay 14 days in each place. We are actually allowed to stay most anywhere, but there is a but. Over the years District office heads have had their road crews block off camp spots and side roads to prevent camping in a lot of places, especially around populated areas and where they make pay camps. So one can go for miles and not find a spot. But in the more back country parts there’s usually more open spots. As long as it doesn’t say no camping or no overnighting you can camp there. They can only charge for camping for improved spots, such as having rest rooms.

I’ve always thought it unfair that when they make a pay campground they block off all the free camp spots for miles around, but they’ve gotten away with it for years so I just have to live with it.

When on the highway, rock quarries and gravel storage area’s are good. Lots of them don’t have any signs and if it’s a weekend no one will be getting rock. Lots of them are only used when they need rock to repair the road. Sometimes it will be signed with no trespassing, but that usually means don’t steel the rock. If they really don’t want you in there, there will be some kind of gate.

Big power lines usually  have service roads under them and lots of times they are not blocked especially out in the country so those can be good.

Having the small van I do helps out, but there are places one can get a fifth wheel into around too. Most of the roads to the rock quarries are rocked and wide for big trucks so RV’s could use them if they wanted.

I try hard to get off the main road and out of sight as that’s camping to me, pay places just aren’t my style, it’s not camping and should be called something else.

Anyway that’s the gest of it. If I get desperate and it’s getting real late I’ll take most anything as long as I’m not blocking any road even a little back one. I can always get up at first light and drive down the road a bit before anyone gets moving for the day, but this kind of situation is to be avoided when possible.

Critters at the rock quarry camp

After I pulled into this rock quarry I saw some movement out  my window. These two ground squirrels wanted to cross to where the water was across the flat in front of me. One of the guys is hard to see behind the  one in front. 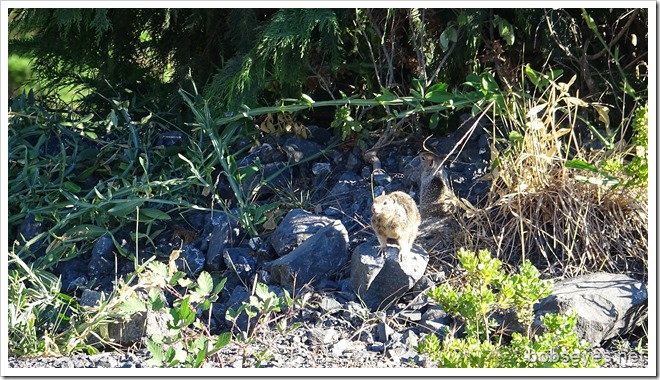 A bit later I thought I saw something moving up in a bush looking out into the ocean. It turned out to be a little chippy checking me out. 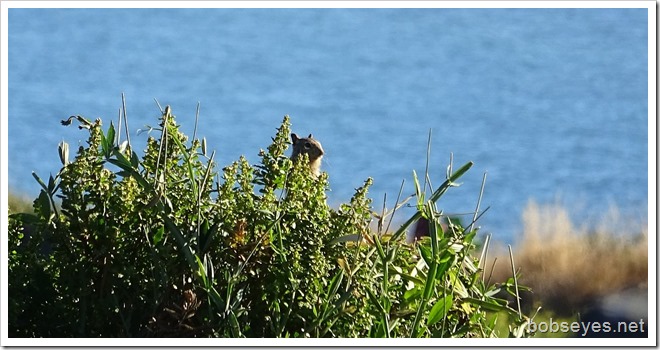 Here’s a wider view of the van parked in the rock quarry as the sun has just started to go down behind the van, the ocean is on the left which I overlook from this hill camp above highway 101 which is down below. 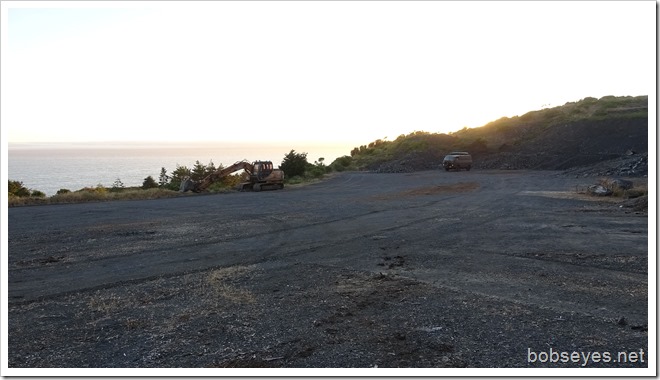 Tomorrow once I get it going I’ll be heading south down highway 101 headed for home, about a 9 hour drive I think.

I did check my new tire pressures to make sure they were all ok and they were and the oil and water is up too so I’m cleared to go.