Ray, John and I Paddle Around Jenner In the Light Rains

Kayaking with the guys

Ray told me yesterday when I was visiting that he and his brother John would be down at Jenner today, so I joined them this morning.

But when I got it going and looked outside,  I could see it was raining lightly. I wasn’t sure the guys would be down at Jenner, but I decided to drive down there and see.

Sometimes during a rain at my house, Jenner would be dry so the only way to find out is to drive down and see.

Paddling in the rain

Well, today it was still raining lightly when I drove into Jenner, but not too bad.

I found them at the ramp as they just had put their boats in the water.

After I put my rain pants on,  I put my boat in the water and we sat in front of the boat ramp for a bit shooting the bull. 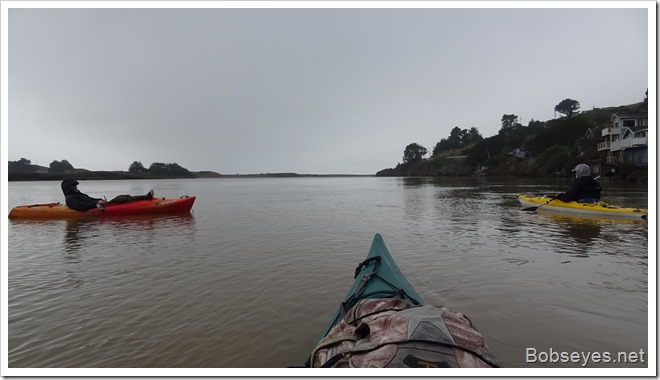 Eventually we headed on down to the open mouth area. The water was muddy from the rains the other day. 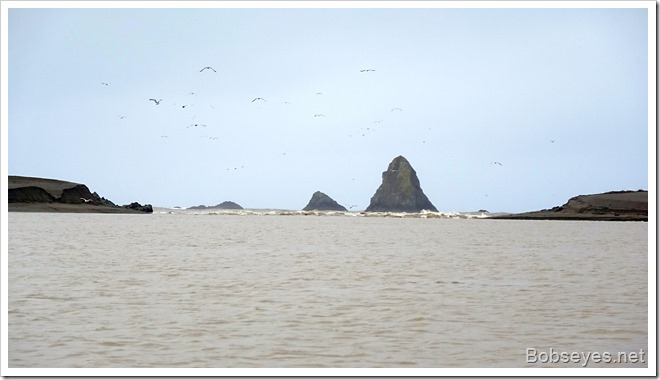 We found this boat down there. John was interested in it as it was in pretty good shape, but he left it there and we paddled on down to the end of the river. 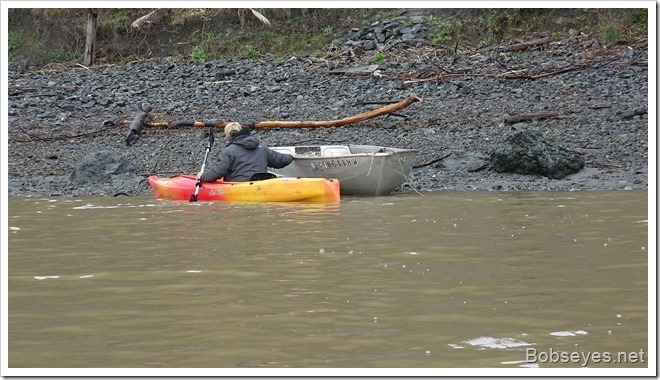 We went by some harbor seals resting on the beach. 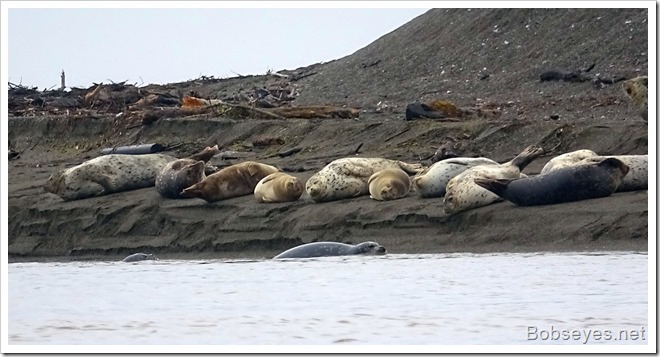 John was hunting around for any fishing tackle that came down the river with the winter waters. He looked around this debrie at the end of the river for a bit. That’s Ray all bundled up. 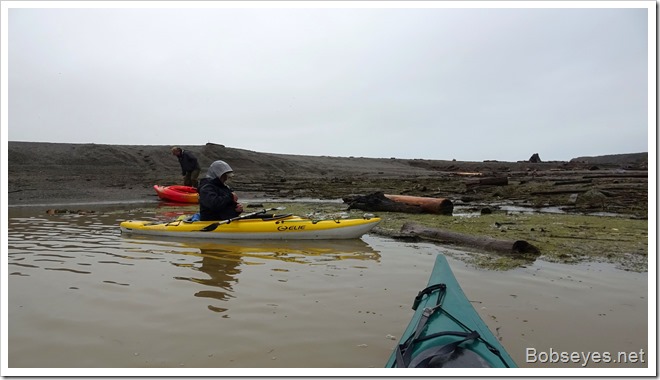 Eventually we left the mouth area and headed over to the bottom end of Penny Island. 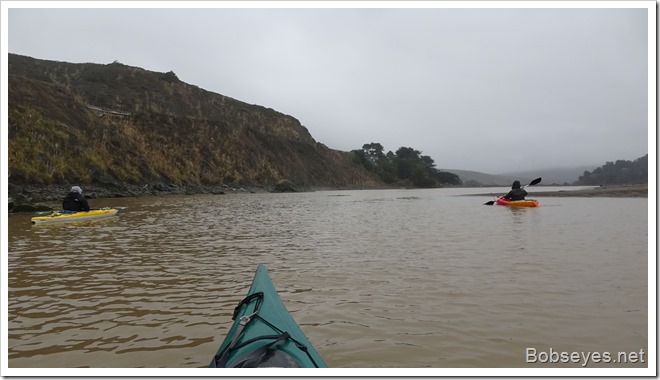 John and Ray were having lunch and these seagulls flew in for a snack. The brown one is immature and is doing it’s feed me thing  which they usually do to the older gulls to get something to eat. 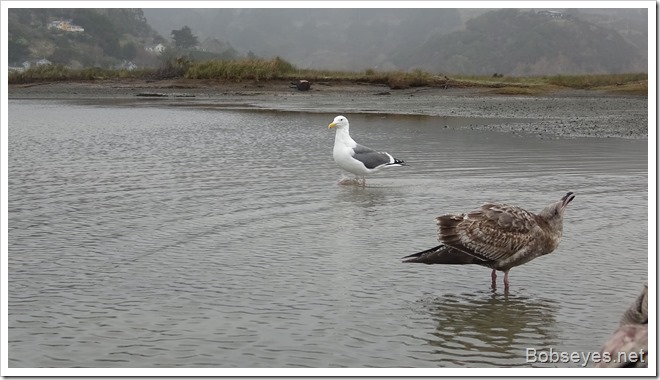 We started up the islands back channel where we saw three deer grazing on the island.

Here’s one of the deer checking us out as we passed. 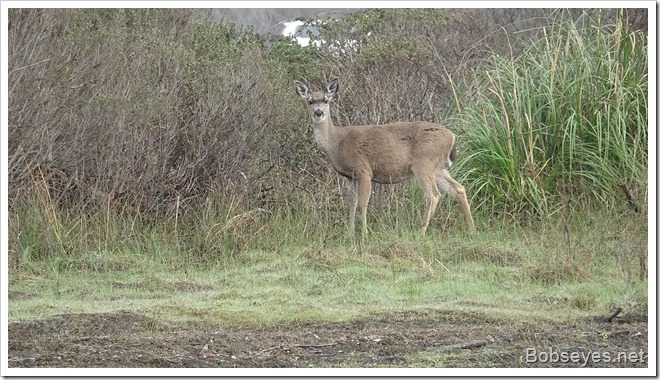 Rain and the wind stopped

We were going to paddle into the little channel on the upper end of the island but the tide was going out so the water was too low to paddle in there, so we continued on up the river along here. The wind was dying down and the rain had stopped and it looked like the sun might work it’s way out. 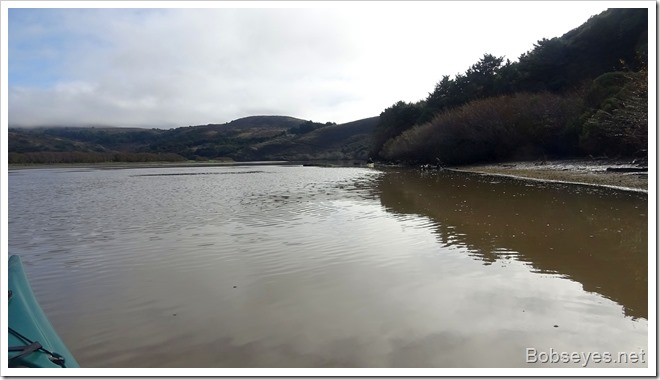 Someone said there’s and eagle flying overhead so we watched to see it it would land up ahead at Eagle’s landing and it did.

The eagle could wait as we pulled into a spot and sat in our boats for a good break. Ray says there’s an otter swimming by out in the river. There was but it was diving and moving rather fast by us.

Eventually I paddled up the short distance to Eagle’s landing to see if the eagle was still there and it was. But the sun was behind it and I couldn’t get a decent photo until I paddled up the river and out a bit to get a different angle.

Here’s the eagle sitting in a big fir tree at Eagle’s landing. You can see why I named this spot Eagle’s Landing. 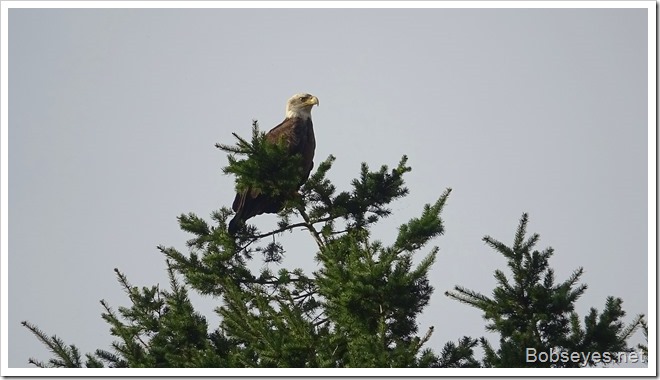 John and I were talking about paddling up the river a ways, but Ray was for heading in so that’s what we did.

Some sun broke through

Here we are heading back down to Jenner drifting in the current. The water was mostly flat by now and we were getting some sun. 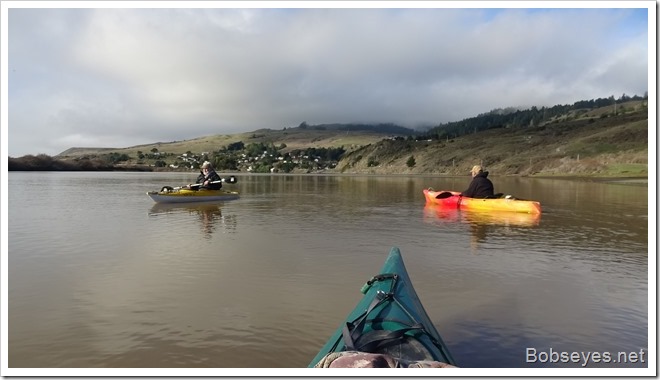 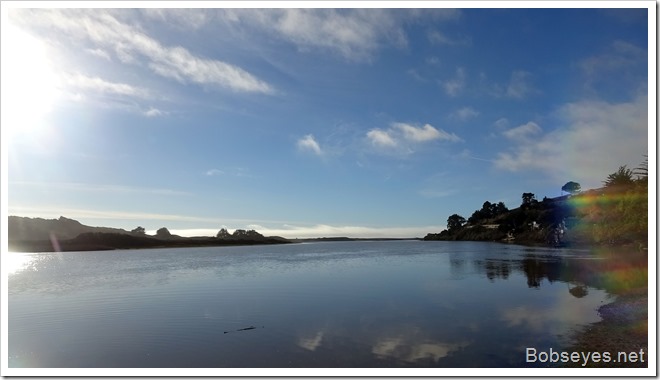 We got our boats on our cars and went on home. It turned out to be a nice paddle day, even thought it didn’t start out that way.

I’m on day four fasting and I’ll be free to eat again late tonight. My brother’s been telling me how good kale was so I walked over to his garden to pick some for later.

Here’s his kale and some arugula, not sure that’s spelled right. 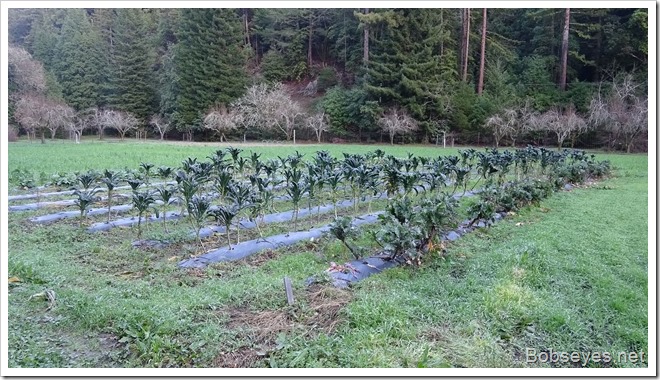 Kale on the left and arugula on the right. 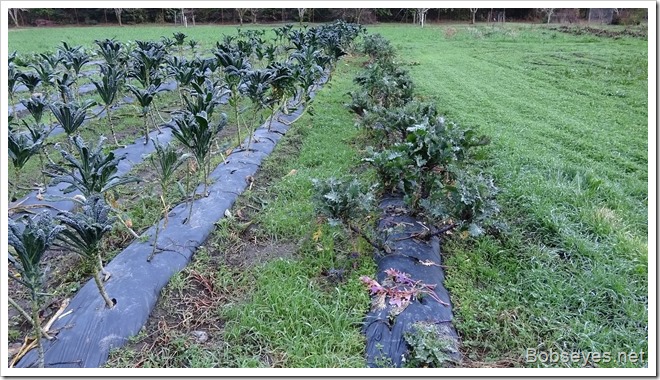 I picked mostly kale, but I did get some arugula too. Both tasted fairly good when I sampled them. Nice and crispy and sweet.

I walked back to my house through the apple orchard and through this old gate. 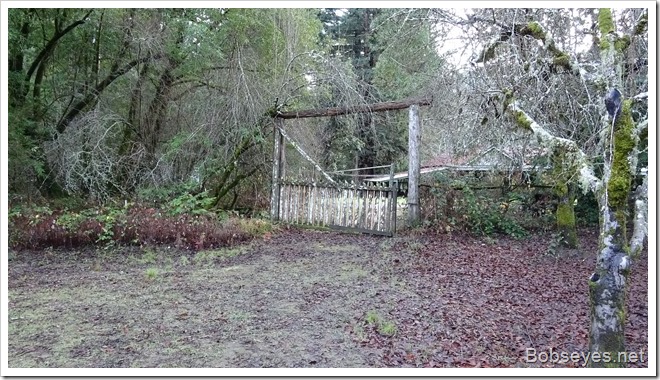 I went in the house for a nap and that was it for me today.