The first night I put out the new feed box and moved the little other feed box the rats were used to, no rats came by that night. Very cautious critters.

The is a night shot of the area from my cam that is  mounted out there to keep an eye on what’s happening. 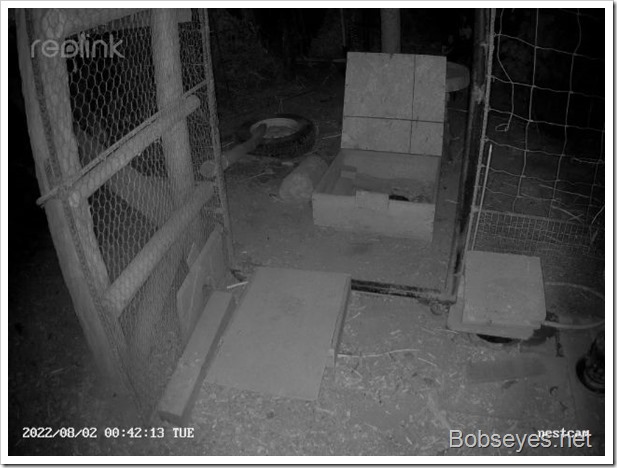 The big feed box lid is left open to encourage the rats to eat from the food in there.

Snooping around a bit

Last night a couple of rats came by for a bit but didn’t go in the feed box. 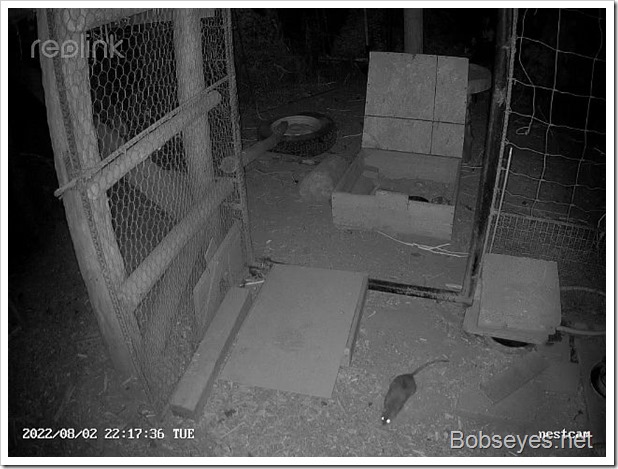 Eventually they should get used to the changes and start eating out of the food box, that is the hope.

After eating and a nap I hopped on the dirt bike about 3 and went up into the hills for a ride around the roads and trails for about an hour before ending up in the area I’m working on the old animal trail. About half way up I realized I’d left my camera at home. I get a lot of exercise from the trail work, but also from riding the dirt bike, especially with all the hilly roads I ride on. The body gets more exercise riding the dirt bike than one would think. It takes a lot of muscles to keep ones body on the bike as it scoots around.

Roots to dig out

At the trail work area I had about a six inch diameter tree root to dig up and cut off to get out of the trail so I worked on that for quite some time. Once that was out there were a bunch more roots of smaller sizes to work on. I worked on that until I was beat, then sat in the chair to rest and enjoy the forest, before heading for home.

Once home I put on some sprinklers and did some chair hopping around the yard eating various berries.

(Visited 121 times, 1 visits today)
This entry was posted in Uncategorized and tagged dirt bike ride in the forest, trail work in the forest, Working on the rats. Bookmark the permalink.