I had planned to go up into the hills and work on the old hermit’s spring but my brother Barry called about 11 and wanted to go for a dirt bike ride up where the forest fire burned. Right now every body’s gates are open so we can ride around most of the places near us. I know some of the people but not all of them. And a lot of them I just met during the fire and most of those people know me by name but I’m not so good on their names as with age I can’t seem to remember names very well and even faces I’m not too good at for some reason.

Barry arrives and we took off around 1 heading up into the hills.

The first stop was the Robert’s place as we needed to ride through their place to get to the other places. His wife Laura was home and we shot the bull with her for at least an hour before continuing on heading west.

We rode through here which shows a good example of most of the roads we rode though. 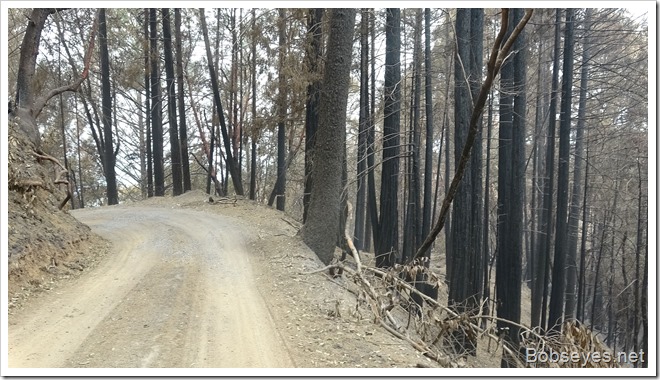 We’ve never ridden these roads not even 50 years ago when we used to ride dirt bikes as kids so we had to stop every once and awhile for Barry to check out if we were on the right road or not. We did get off the right road a couple of times which didn’t really mater since we were mostly exploring anyway. 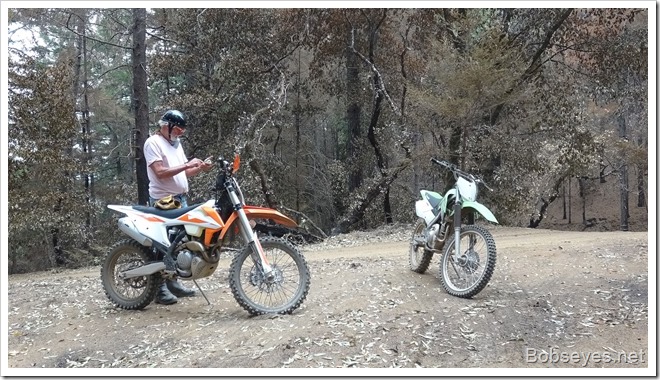 We stopped here for a map check. The fire burned through here pretty hot and killed al lot of trees. 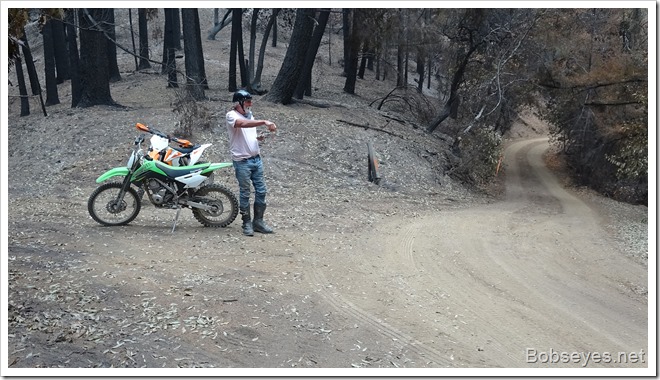 We rode through a couple ranches right by their houses but no one was home.

Here’s one of the views from the hilltops where the road went that we were following. A bit smoky today but not near as bad as yesterday. 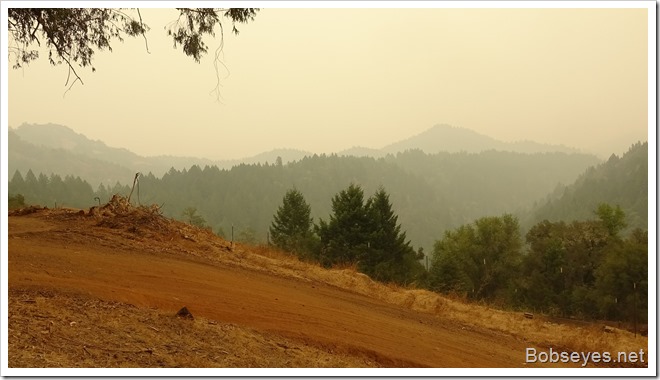 That little dot is our sun today through the high smoke. 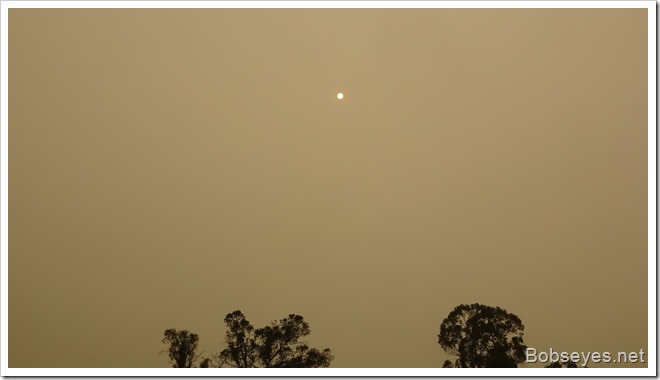 We came to a house where there were some people out front and the guy says, hi Bob. Turns out I ran into him up here somewhere when the  forest fire was burning through the area. His house was saved and we had a fairly long chat with him and his wife and his little boy on the bicycle in the back there. 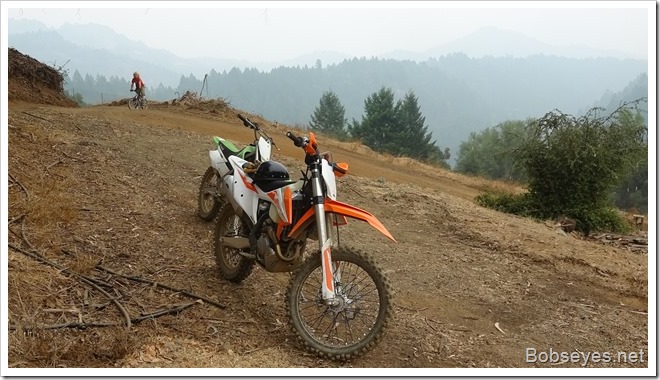 We road out his road until we hit the pavement on Old Cazadaro Rd. and then turned around intending to go back a different way but kept getting a bit lost so we ended up going back the way we’d come which was just fine as it was all dirt biking type roads.

When we left Robert’s place earlier his wife asked us to watch out for phone splice boxes to look for a bad one as their phone didn’t work.

Barry spotted this one which got real hot and melted all the wires together. 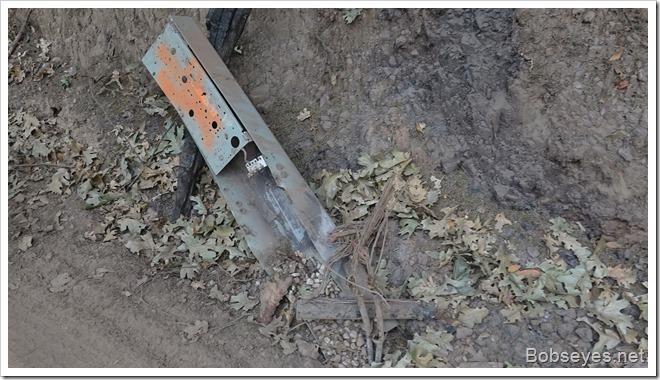 When we popped out of the Lutrell ranch we ran into these guys. They just came down from Roseville Oregon to help with the fire mop up. We had a nice chat and they were a good bunch of guys. I’ve learned to stop and chat as it makes things more interesting and most of the people we’ve met have been real nice. These guys are watching for any small fires that might spring to life from smoldering stumps and stuff. 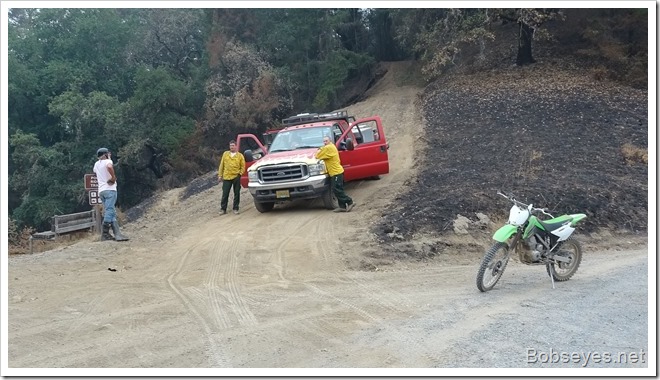 By now it was 5:30 but I still wanted to visit the old hermit as I’d heard he was home.

We rode right up to his house and I heard someone in the house so I yelled out the Hell’s Angles are here. 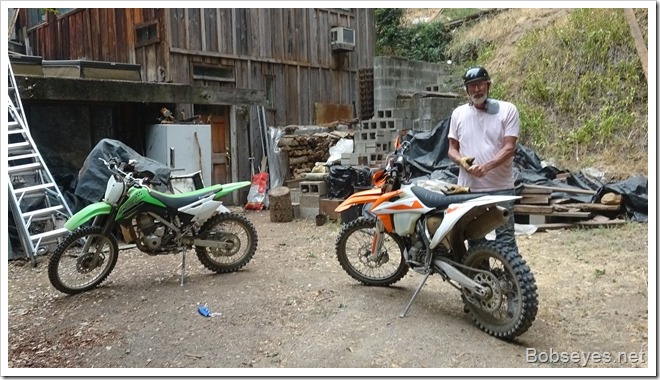 This isn’t a good picture of him as he was just getting out of his chair but he’s almost that bent over. We shot the bull and talked about fixing up his spring before heading down the hill. 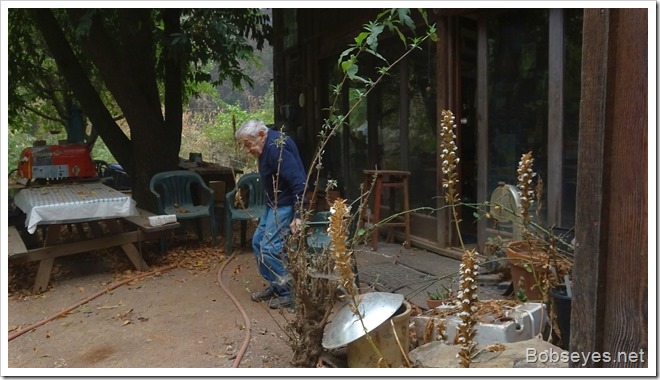 Since the quickest way home was down through the park, that’s the way we went and I also wanted to talk with the park environmental guy in the yellow shirt. 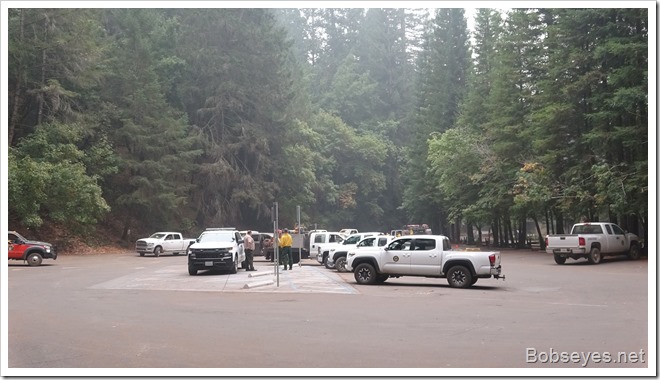 He was talking to another park guy from up at Fort Bragg where Barry’s wife has a house by the park up there so they both had a nice chat. Turns out he’s a local boy up there and knows everyone in town.

The environmental guy is somewhat in charge of all the guys helping in the park right now so I told him about the guy that gave me a hard time the other day and he said he’d talk with him.

A bunch of these pickups showed up in the hills a few days ago and I didn’t know who they were so I asked some fire guys yesterday. It turns out it’s the California National Guard and they are suppose to be here helping clean up after the fire for about a month. 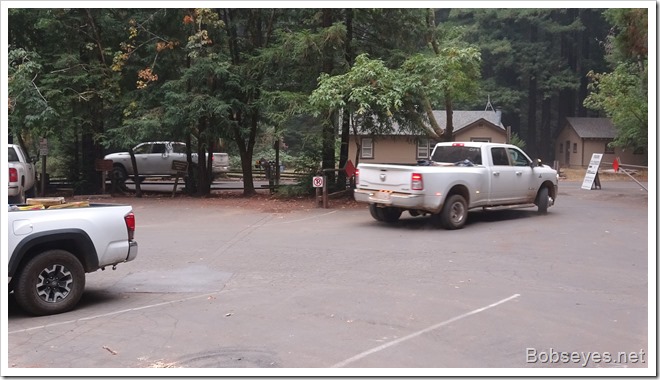 They’ve never had a gate to close this park. It’s expected to be closed for about 6 months to get things all fixed back up and safe for people. 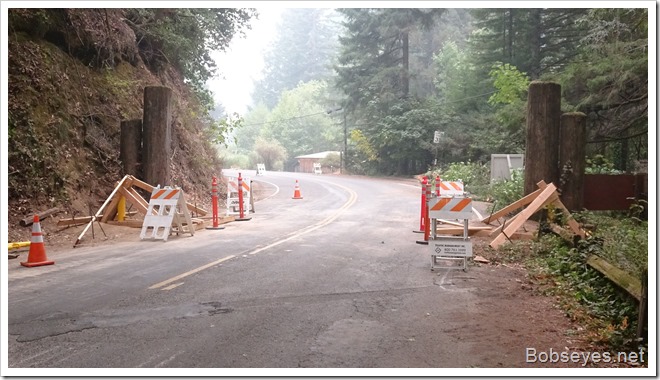 Riding around back roads and visiting with neighbors and fire guys made for a super day riding the dirt bikes. We are going to try and do it at least one more time before the ranch gates get locked back up.