It rained real hard this morning before I got up so I stayed in bed longer which was good as I had another bad sleep night. By the time I got it going the sun was out some.

I went out to take care of the chickens and let them out for the day. 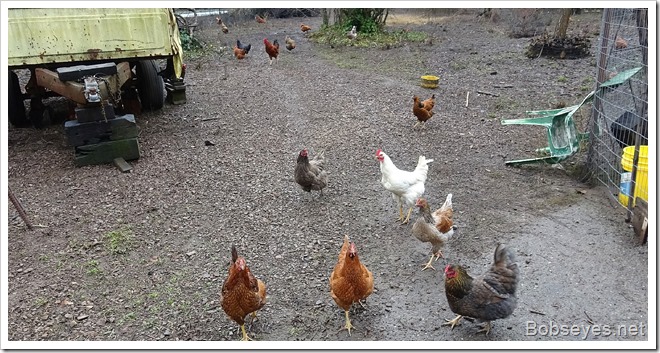 Egg production is up

I checked the nest area for eggs and noted egg production looks to be improving a lot. 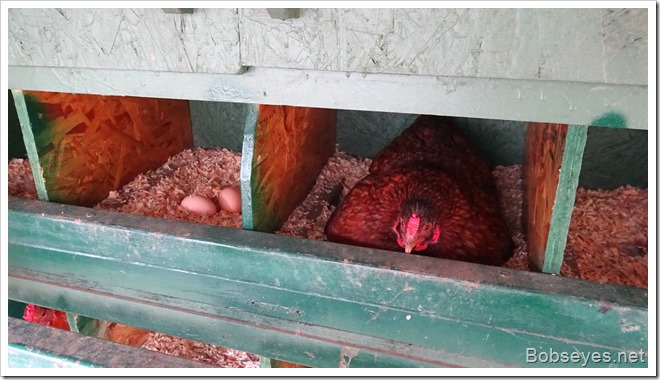 With all the rain there were a lot of things that were still wet that would be better left along until it was a sunnier day.

So what to do

I had six crab snare cages that could use some lead poured in them so a I set up the lead pouring area and lit the fire under the lead pot. 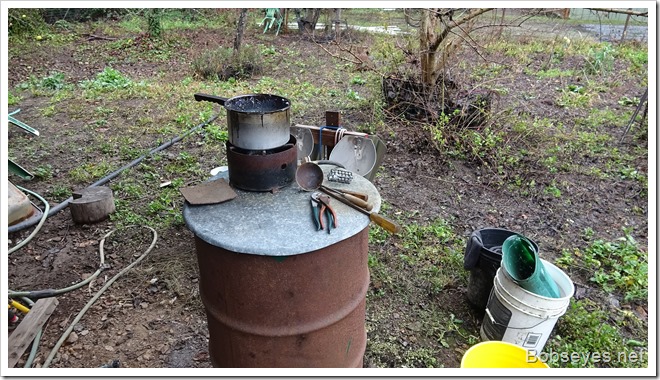 While I was waiting for the lead to  melt in the lead pot, I looked at these three apple trees and got the tools to start pruning them. 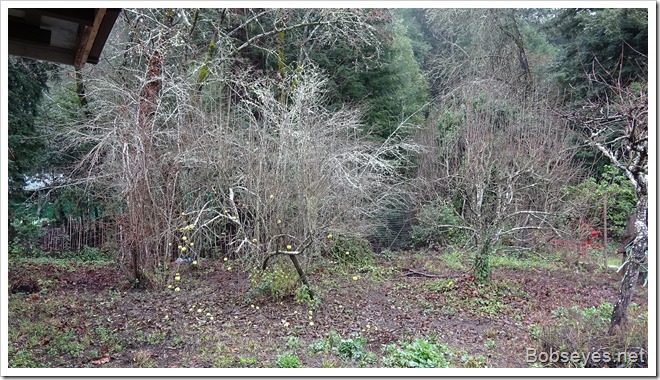 I didn’t get much pruned when the lead was hot and ready to skim the slag off the top. 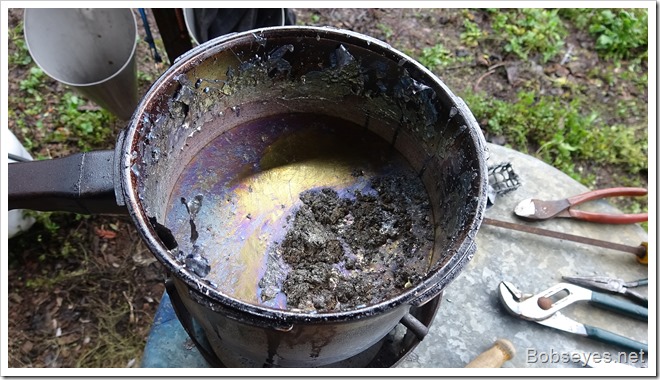 I’d baked the lead pouring molds in an oven for a couple hours the other day to stop the lead boiling from the water in the mold material when it was poured in. This had caused a violent bubbling so I hoped the oven bake removed the water and the pouring would go better.

The molds are set up with the wire cages and ready to receive some hot lead. 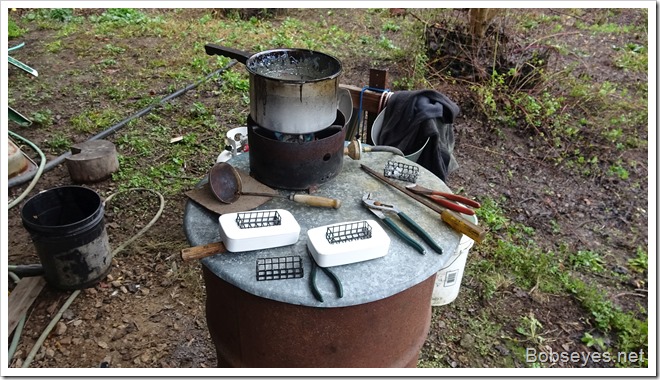 Here’s a couple cages ready to be poured. The molds are tilted so more lead flows to one end of it then the other. 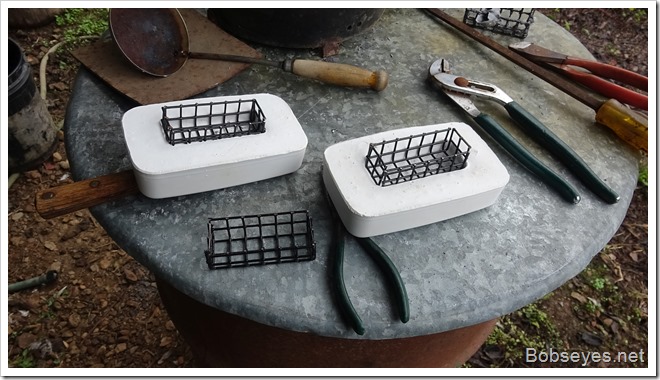 I poured all the cages I had, 6 of them. Then I noticed the crack in the mold on the right one. 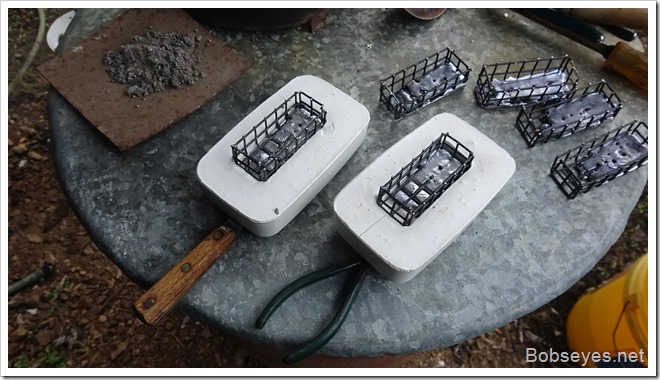 The right mold has a crack in it, but still usable at least for a couple more pours. 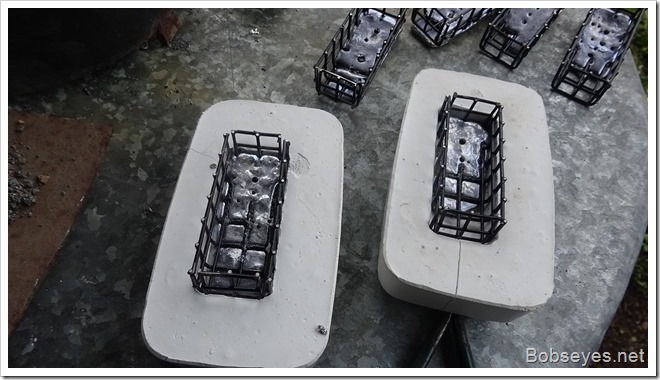 I waited a bit for them all to cool down before throwing them in a bucket of water to cool them all the way down. 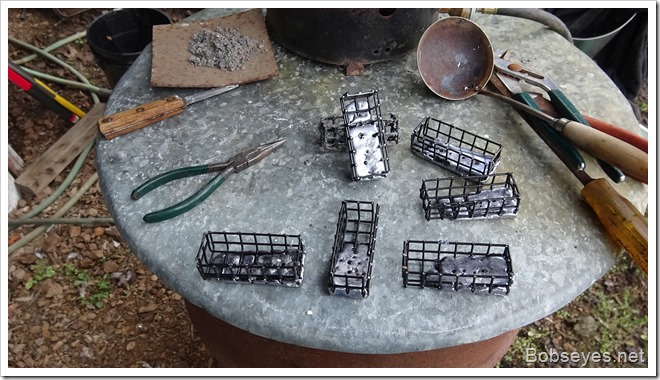 These show how the lead is poured with more on one side of the cage than the other. This is supposed to help cast them and  help keep the cage in this position when it lands on the bottom of the ocean. The weight does seem to make the cages land right side up at least on top of this barrel. In the water it may work but I don’t really think it matters much as what matters more is are their crab present. Once they attack the bait in the cage they will move the cages in all directions and hopefully get tangled in the snares. 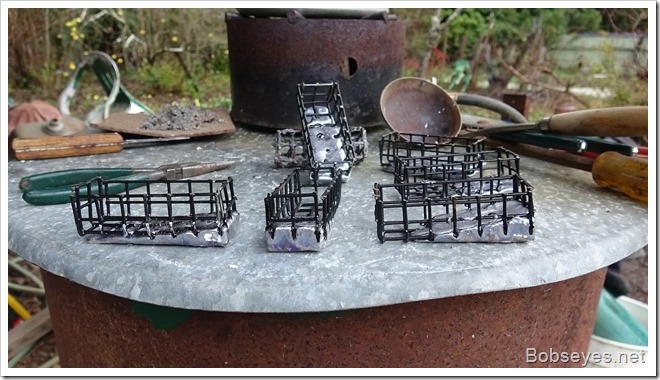 So I will give these cages to my brother Barry so he can attach the snare loops and finish the snares off. Then he will be set to get the rest of the fishing gear he needs to get started crabbing.

I inspected the cracked molds as both of them had cracks. These will work for now but I will eventually have to make some molds out of steel once we get a chance to try out these snares and see if this is what we want or do we need to change the size. Steel molds are harder to make but they won’t have the problem with water as these do and the steel ones won’t crack.

The last thing I did is weight each cage and marked them with the weight to see what size I had poured. We were shooting for 4 to 6 ozs.  or so. I measured from 6 to 9 ozs. so we have some of each and the first batch I made where a lot heavier than that, more around 12 ozs. .

I tried to get back to pruning those apple trees but the drizzle started and continued for the rest of the day. If I’d pruned without putting on some rain gear I’d slowly get wet so it will keep for another time.

At the end of the day I checked on and put the eggs up for the day. Today’s eggs are on the right and there’s 14 of them so each day the eggs are on the increase after their molt when they were laying almost no eggs. 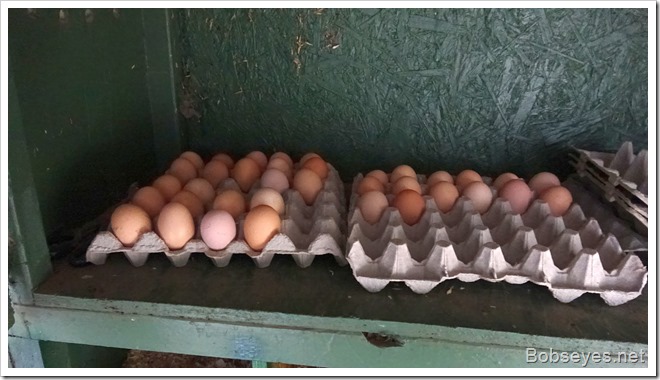 I checked on the chickens to  make sure they weren’t getting into any mischief. Because of the constant drizzle most of them where staying under the trees out by the front gate. 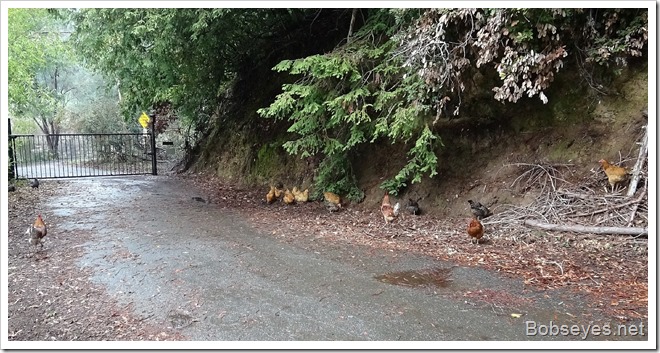 1 Response to Rainy and Working On Crab Snares, More Eggs