Rain, Checking Out the Forest Roads, and Some Hiking Too

It started raining around three this morning until about noon today when it let up and the sun tried to poke out a bit.

Still no power so we did the generator chores, gas and oil. The last report said we’d  have poser back by 10PM on Wednesday, tomorrow.

Once the rain let up, I didn’t want to spend the day in the house so I gassed up the dirt bike.

A commenter wants to know what I mean by ditching the roads. Ditching is where you take a shovel and run shallow ditches across the roads,  to the side of the roads, to drain any water that was running down the roads. You do this often along the roads to keep the water from building up on the road and causing big ruts that can wash things out. As water runs down a dirt road, the volume increases and can do a lot of damage when it runs down a road. The idea is to not collect water, but to dissipate it off the road so there is no road damage.

A neighbor, Fred came by and wanted to trade a dozen eggs for a quart of pure apple cider he made last summer. I, luckily had a few eggs ahead so I said sure as his apple cider is real good.

Checking out the forest

After we shot the bull for a bit I hopped on the dirt bike and rode on up to the hill top to have a look around and stopped here at the Guerneville Overlook, to have a look. 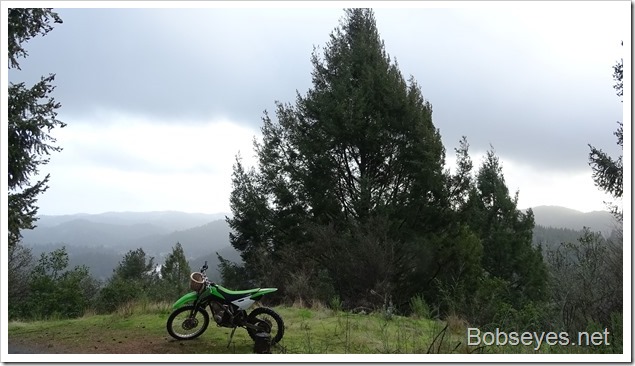 You can see some flood water sitting in Korbel’s vineyard, but the town escaped flooding, so far, as the storms have been coming in with some time between each one. So far, things haven’t been as bad as the experts predicted, fortunately, for those people living down there. 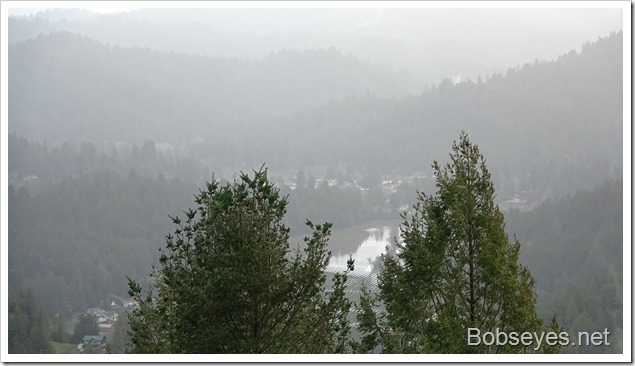 This is looking west towards the ocean where the storms usually come in. I did get a couple light showers while riding and hiking around. 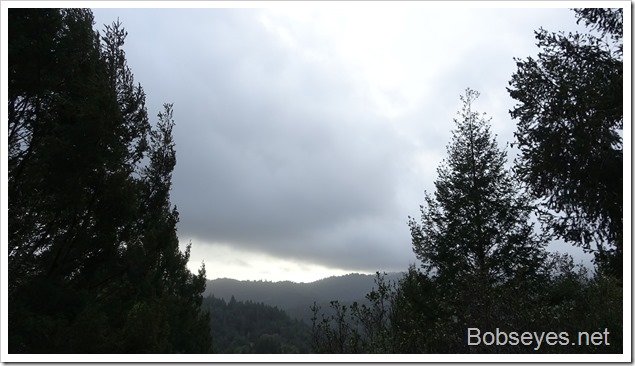 I rode around for about an hour just checking things out, then stopped here to go for a walk down a trail I’d been working on, to see if it had any damage. 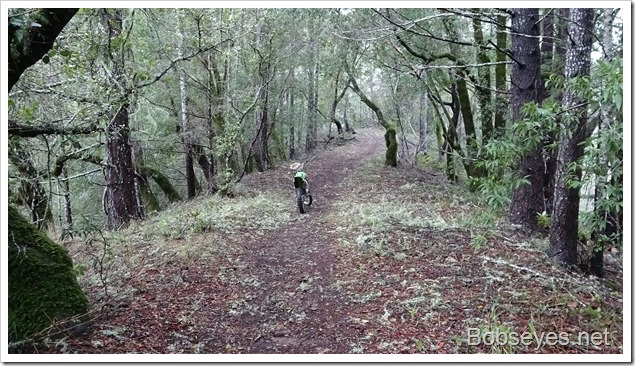 The forest view from that spot, looking south. That black cloud did drop some sprinkles. 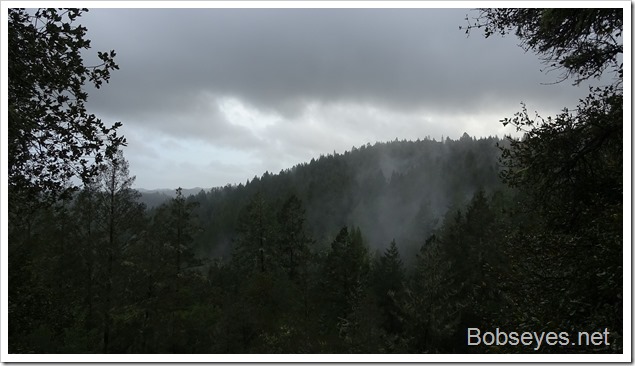 I walked on out this trail for about a quarter mile or so. 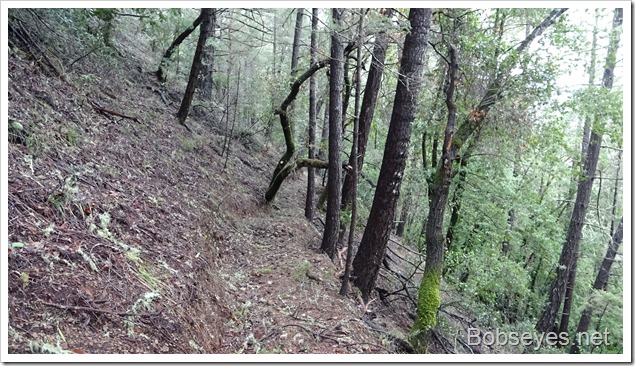 And through this forest a bit. 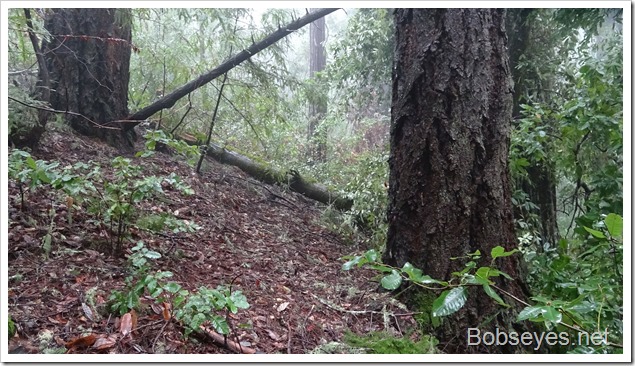 The trail has a lot of smaller tree debris on it, but it was fine, otherwise. 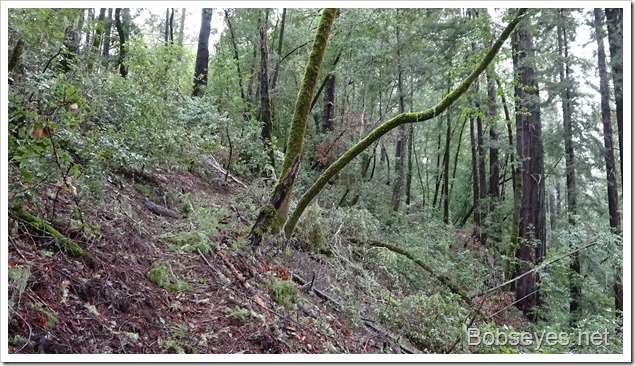 I made it to these chairs on the way back and was overheating so I took advantage and stopped and rested and enjoyed the day, until I cooled down. 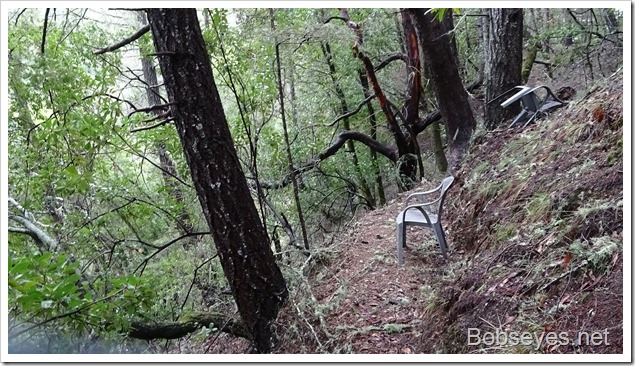 From there I rode on down this trail and through this creek. 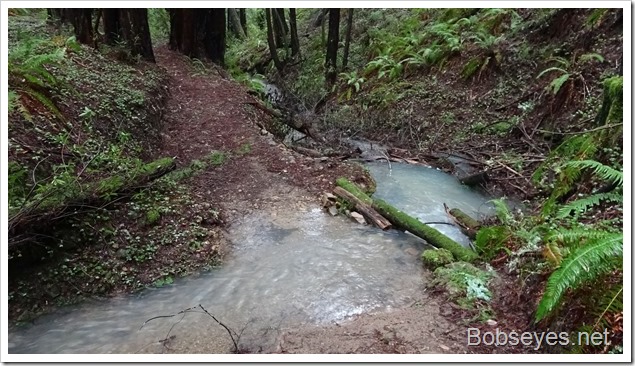 I was headed to another trail I’d been working on to check it out and walked on up here. 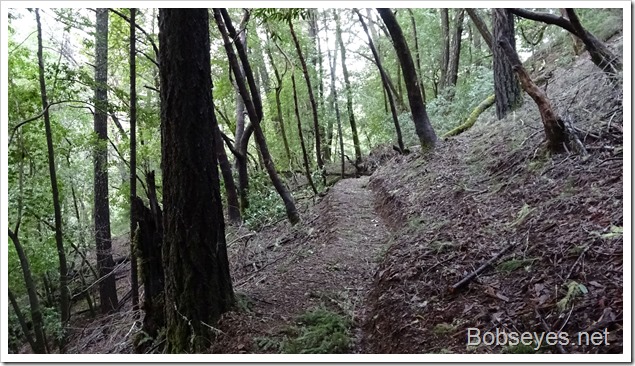 And continued on up the trial. 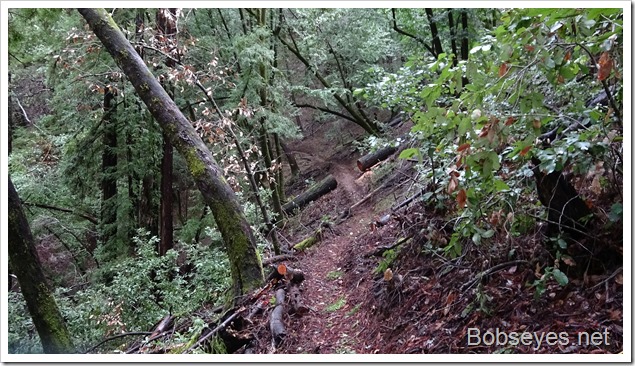 That trail looked good, but I noticed it was starting to get dark and it wasn’t from the clouds. I checked my watch and it was ten to five so I better get on home.

As I made it back to the dirt bike light from lightning over the ocean started to flash and then the thunder was heard. 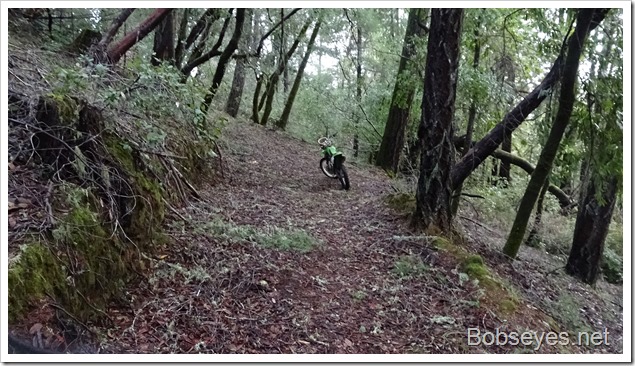 From there I hurried on home and went over to help  my brother Tom do some ditch digging until just after dark.

(Visited 88 times, 1 visits today)
This entry was posted in Uncategorized. Bookmark the permalink.