I got a late start on the day and didn’t feel like doing much of anything so I went out and sat in the yard in the sunshine. There’s another rain storm coming in sometime tonight so I thought I better enjoy the sun while I can.

Digging up the potato patch

I was looking at my potato patch and thought it could use some digging up mostly to loosen the dirt that’s gotten a bit compacted so I worked on that on and off throughout the day.

I’d loosen the dirt with a spade type fork and then dig around with my hands looking for any potatoes lurking in the soil. Then I’d turn the soil a bit and cover up some of the defective potatoes I found while digging. There’s always a certain amount of tatters that bugs have chewed on that I plant back to turn into potato plants that can grow more potatoes.

I dug up two strips just to the right of the bucket that has the potatoes in it from todays harvest. The dirt is real nice and black as it was all made from tree leaf mulch. 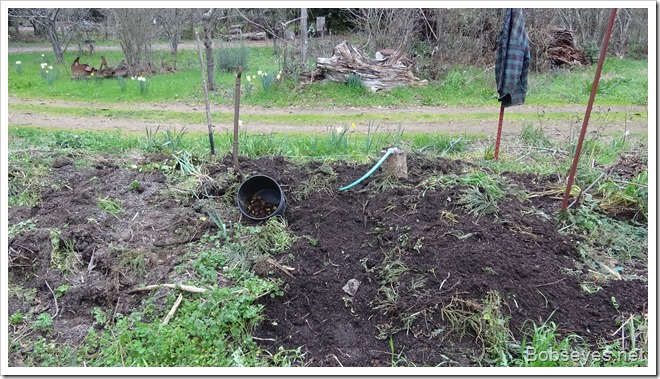 There’s still lots of daffodils blooming. The coming rain will likely knock most of them over. 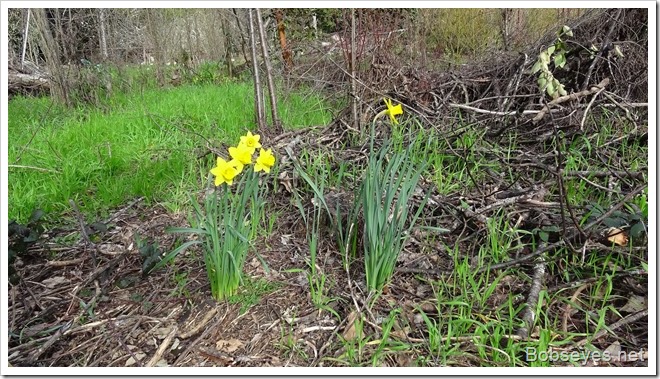 I puttered around in the yard all day. Occasionally doing a small job that has needed doing. Like tying the black bamboo out of the way of the front walking gate  so it would close and putting the van’s headlight trim pieces back in place.

I’m starting to prep the van for a trip I hope to take up to Port Orford OR. I’ve been watching the weather up there and it just keeps raining with one storm coming in after the other. So, I’m looking for it to at least shower instead of storm and I may get up there near the end of the month. I’m expecting a new set of rain pants to arrive tomorrow so I can survive and do stuff in those showers.

Thinking of Arizona too

After that, I plan to get on down to Arizona for at least a couple weeks and maybe return home via the Jarbidge Nevada way. I decided if I make the Arizona trip this year, I’d do it later to give the Jarbidge area time to get past winter so I could do some adventuring there on the way home. In previous years, when I left Arizona for home, the Jarbidge area was just to darn cold or just still too much storming.

Spring is still springing here. I noticed some of the plum trees are starting to bloom today. This is looking over my brother’s raspberry patch which hopefully will do some growing soon. 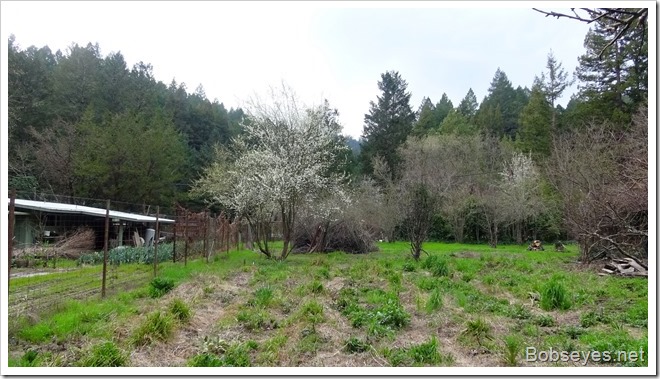 There’s a nice crop of weeds growing too. Green weeds are ok with me, at least until they turn brown and then I remove them for fire protection, otherwise I’d just leave them there.

And that was my day for a restful one.