Problems Getting Parts, a Nice Visit and River Access

I needed some more parts to complete the work I’ve been doing on my  van’s cooling system. So first thing today I made a list of the parts I needed with some sizes too. I need a hose similar to this one below and I figure that is the hardest one for them to come up with as the part I need is not for a specific car and most of the parts people aren’t too good unless you can state a car or part number. But I need to try as it’s where one starts.

Parts list with a sample hose, not the one I need. 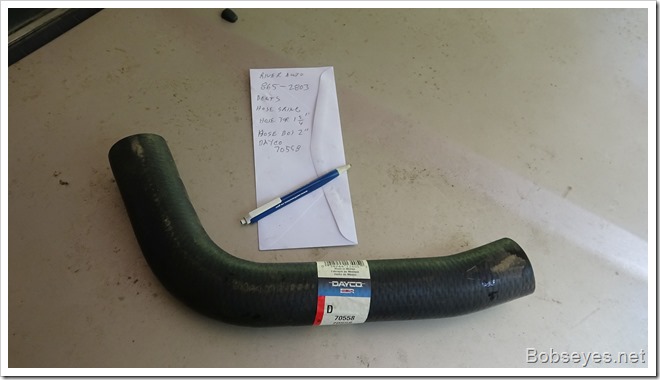 But before I left for the parts I wanted to get a couple coats of paint on the new fan brackets I made to mount the fans.

I set up here by my junk pile. Not really junk. Each one of those rusty pieces of metal are worth more dollars then you might think. I make stuff so I need a good selection of stuff around to build from. Actually I’m doing pretty good keeping that pile as neat as it is and not spreading all over the yard. 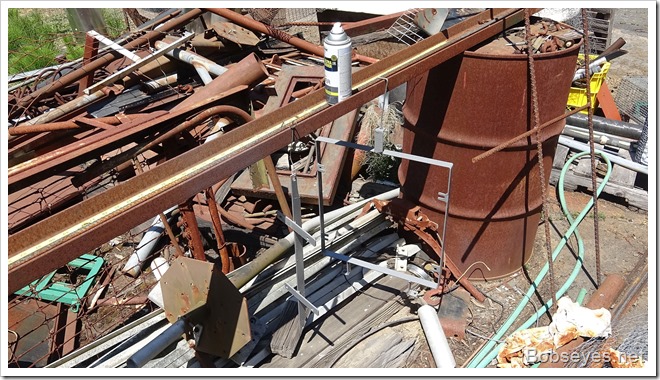 I painted these brackets and hung them here in the sun to dry between coats. 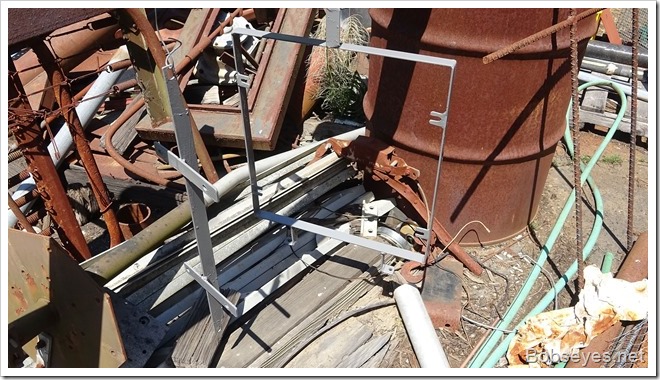 Once I had a few coats of paint under my belt I put my kayak stuff in the car and my parts list and drove on down to Monte Rio where there was a little parts place. It took me over 30 minutes to find out what I did with my face mask. I checked everyplace ten times and finally grabbed an old tee shirt and got in the car and immediately saw my face mask down between the seats. It’s partly an older age thing that one just has to live with as one gets older. :O) The older one gets the more hunting for things one has to do. Most younger people wouldn’t understand.

Anyway I stopped at the parts place and went on in to talk parts. She did ok on most of them but when I asked if she had what they call a spring to put inside my radiator hose she got a little peeved like maybe I was funning her. But I explained they use a spring looking wire to put in some hoses to keep them from collapsing when hot. She abruptly cut me off on that one and said I ‘d have to talk with the manager about that one when he came back. OK, how about this hose I need. No way for that one either, need a car type or a part number. By now I was a little disappointed in Sarah, but I do understand about todays type parts people and only being able to look stuff up on the computer. Some parts people will at least try and go that extra mile for you, but not Sarah.

I paid for my parts I ordered and continued on down the highway to where the ocean is at Jenner.

I pulled in by the little store and looked across to where the boat ramp is and I could see it was blocked. Darn. 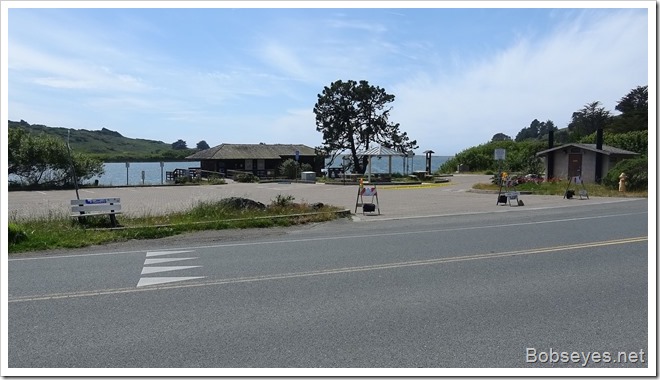 So I walked into the little store and talked with Rob who knows me and asked if he knew if they’d be opening it or not and what’s the score on things.

He said a couple locals guys have been going out and no one has bothered them and offered to let me park in their parking lot.

I said thanks and walked across to the boat ramp to have a look. 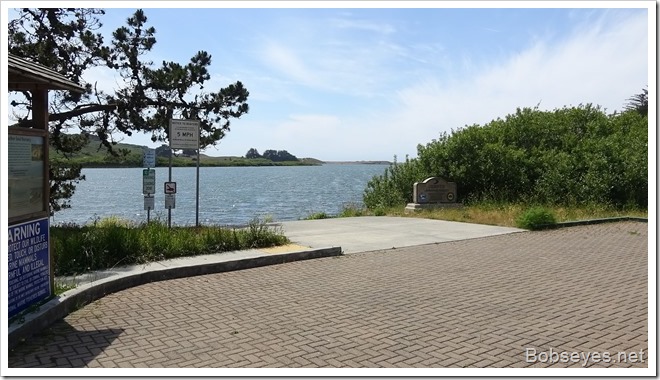 The river was a bit windy but doable, but I wasn’t sure about dealing with any law and don’t like to be concerned about stuff like that when I’m out enjoying myself. Takes some of the fun out of stuff. the water was high like the mouth was closed up. 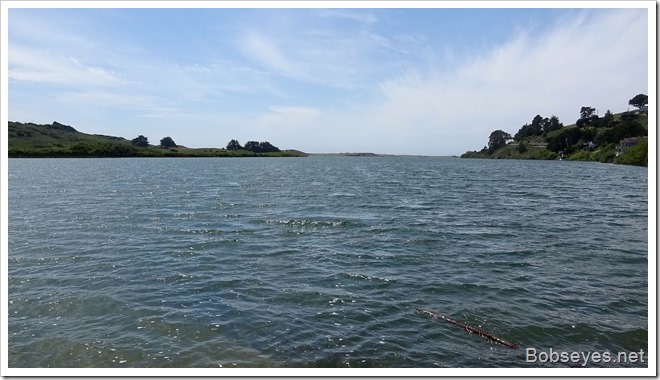 Friends can be helpful

I knew some people up by the bridge that might let me put my boat in on their place until this virus thing is over so I drove on over there to find out.

Now I know these people but not real well. I’ve chatted with one of them every so often and we’ve always had a good chat.

So I drove in and parked and got out to look around for the boss when a lady asked what I wanted. I said I was looking for the boss not realizing she was the boss. Actually the wife.

She pointed up the hill a bit and I walked on over explaining who I was as we look a lot different when in a boat. Everything was cool and he said sure can use his place to put  the boat in and he called his wife back and introduced me and then we walked on down and he showed me the two places I could put in. His wife does flowers and herbs and I’ve always enjoyed the flowers as I’ve paddled by their place and have said so in the past.

Anyway we had a good chat. I thanked them profusely and headed for home, stopping at John S’s place to give him some news. Those people down there that gave me permission to put my boat in knew John well and he came up in the conversation and they said he was also welcome to put his boat in there so I thought it would be a good idea to let him know.

Shot the bull at John’s place

So I stopped at John’s and shot the bull with him and his wife for a bit with his son when he came by.

Summer dams not likely going in this year

His son works for the county road department and informed me they are not likely to be putting in the summer dams on the river this year. I said good, they are past their time and are only in for a few months at much cost and we don’t need them anymore, especially since the guy who bought the local town beach is charging everyone to park down there now.

I went on home and put a couple more coats of paint on my brackets.

About sun down the paint was dry enough on my fan brackets to start putting stuff back together so I did what I could. 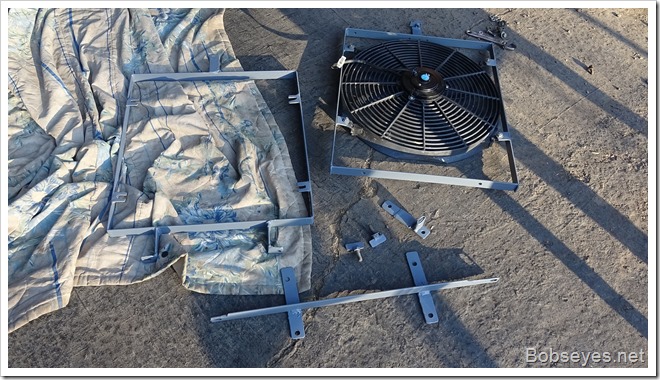 After that a little chair hopping  around the yard.

Figuring out that hose

While doing some chair hopping I was thinking about that hose I needed and what I was going to do about it. Eventually an idea popped into my mind. They make what they call a crimped hose. It’s formed with ribs and is easy to bend in all directions and doesn’t collapse because of the ribs. I checked to see if a smaller size one I have would work by putting it up alongside the engine and it looks like it should if I get the right length. I would bet that parts lady had one hanging on the back wall. I  have to pick up the parts I ordered tomorrow so I’ll see.

One has to be creative when one is building stuff which is out of the ordinary, and my old van is not ordinary, for sure.

All in all a very productive day and now I can get out for some kayaking on the river. Great day.

3 Responses to Problems Getting Parts, a Nice Visit and River Access