Pretty Tired Out Today, But I Fixed, Mowed Weeds and Chased Some Deer

Today I woke up already tired and had a hard time getting it going. I drove down the road a bit to visit with Ray. We’re getting ready to have our elementary school reunion as we are all turned seventy this year so we discussed some stuff about taking them all kayaking and we shot the bull a bit.

A napping kind of day

I went back home and spent most of it napping and just tired out.

Coffee to the rescue

About six PM I’d had enough and decided maybe a cup of coffee might pep me up a bit as I wanted to do  some mowing in the yard.

Yep, that cup of coffee did it so now I could function. My mower is broken and I don’t have the parts to fix it yet, so I went over to my brother’s and borrowed his mower that we’d been putting together from two old ones.

Here’s the old mowers into one. It has a nice Honda engine on it that starts fairly easy. 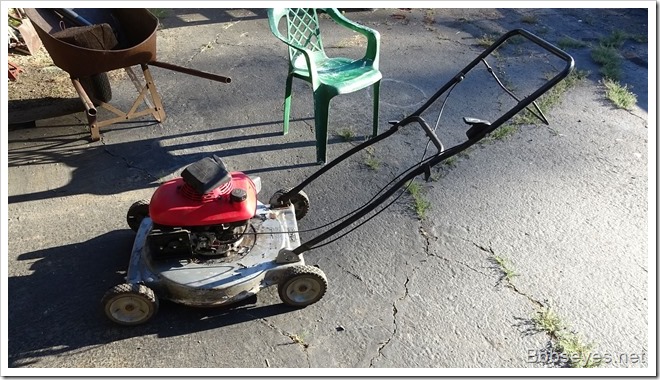 Of course it wouldn’t start

I pulled the rope a few times and it didn’t start, so I got the starting fluid and spayed a bit into the carb and it started up sputtering a bit. I started mowing some of the smaller weeds around the yard and it sputtered and stopped occasionally, so I finally drained the flout bowl trying to get any water out of the carb. That helped quite a bit, and after running it more most of the sputtering seems to be gone.

I mowed quite a bit of the easier stuff and don’t remember why I quite, likely cause I got tired out.

Darn, spooked some deer in the yard

Shortly after that I was walking in the yard and spooked a darn deer and her two fawns out of a bush in the yard. Darn. I thought I had them fenced out. I can’t figure out how they are getting in.

The two fawns were small enough to just go through some of the bigger squares in the fence wire, but not the mother.

Anyway, I chased the doe around my house a number of times, but couldn’t get her to go out the gate I left open for the purpose. My brother finally  heard me shoeing the deer so I got him to help and we got it to go out the gate. Now I was really tired out, but at least I got some good exercise today.

I’ll  be spending some more time beefing up my fence and trying to find where they are getting in.

That was my day, good to get that cup of coffee.

(Visited 133 times, 1 visits today)
This entry was posted in Uncategorized and tagged deer in the yard. Bookmark the permalink.