Prepping the Van, Graphing a Cherry Tree and Stacked Brush

Getting the van ready to roll

Today was to be mostly a prep day to get my van ready for a trip. So once I got it going I went through all the food and supplies in the van adding some and removing some stuff. I also started going through the clothes as I’ll be going to a wet area that may be a bit on the cool side too, so I need the right stuff.

Then I checked the engine’s fluids which where all up to par and loaded this and that of stuff I think I’ll need.

Graphing a cherry tree to a plum tree

I also wanted to graph some cherry wood to a plum tree before I leave and I noticed today the plum tree’s buds were starting to swell, so towards the end of the day I went to work graphing some Rainier cherry wood to a wild plum tree for the root stock.

Here’s the plum tree just to the left of the propane tank. 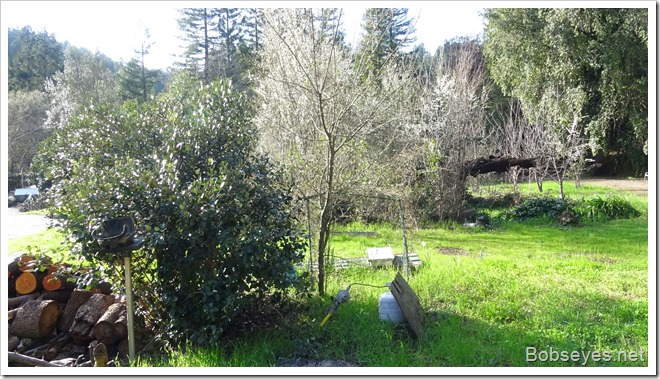 I need to cut most of the plum tree off to make places to put the cherry wood graphs, so I took most of this trunk down. 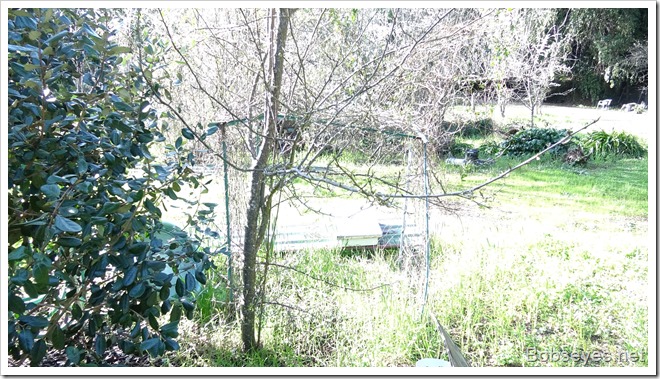 This is the plum tree trunk I have left to work with. I plan to graph in three places. 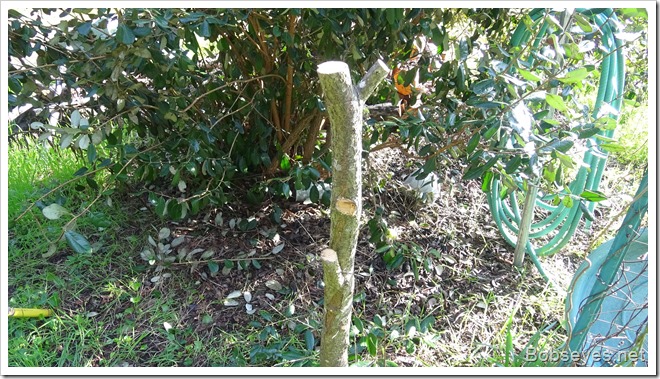 I used my machete and a hammer to put splits in the places I was going to add the graphing wood. 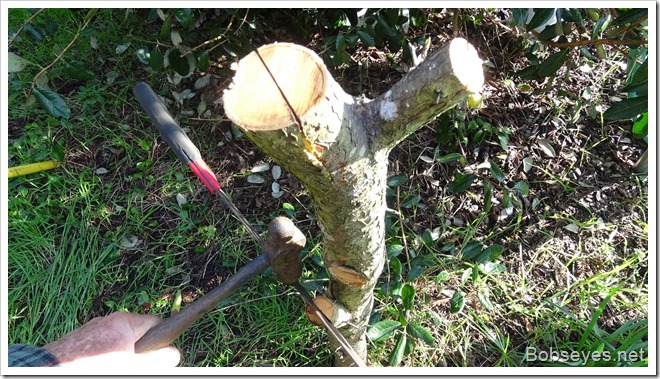 Then I forced a screw driver into the slots to open them up to receive the cherry wood graphs I had cut the ends to tappers to fit into the slots and tried the best I could to line up the cambium layers. 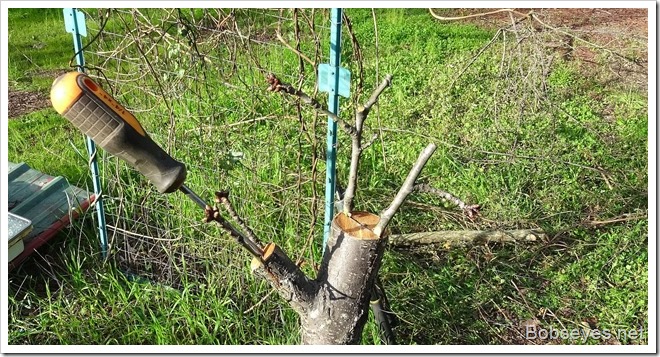 Here’s the cherry wood graphs in place. I did something different this time and used modeling clay to fill in the cracks which should help protect this part of the graph. I don’t really like the commercial graphing compound as it dries out and cracks a lot and then the graphs fail from drying out.

I then used black electrical tape to seal over the clay, like this. 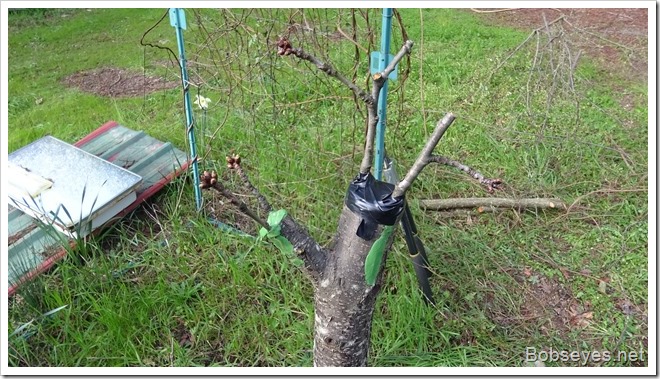 I used the pliable electrical tape to seal over the big cuts and around the graphs as we don’t want this part to dry out, but instead grow together and form a new cherry tree. 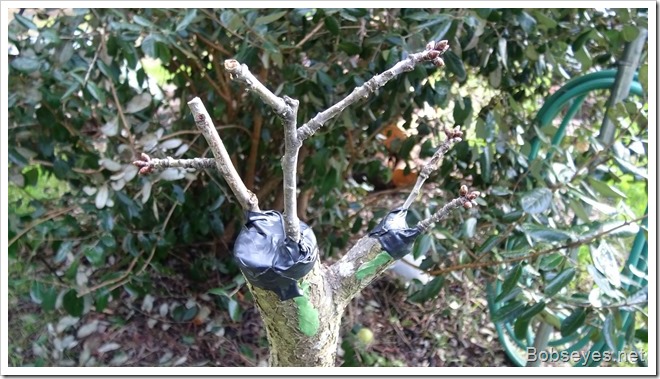 I used duct tape to seal the lower parts where the cracks were that I filled with clay and the finished product looks like this. 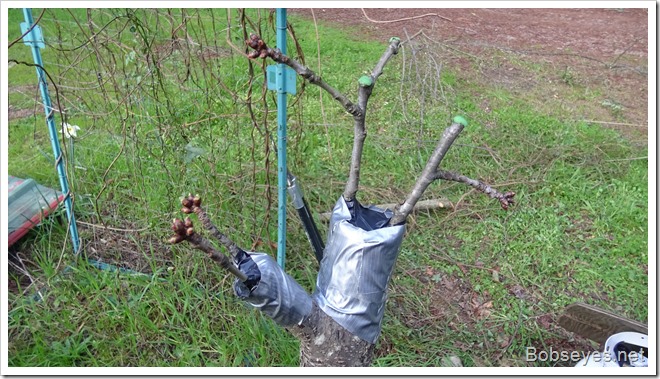 If all goes well this spring and I did it right, the cherry wood should sprout and take off into a new cherry tree. If not, just a little time wasted as I didn’t like that plum type anyway.

Got all the brush stacked

I finished that and still had a little more time until it got dark so I stacked this brush on the habitat pile on the right. 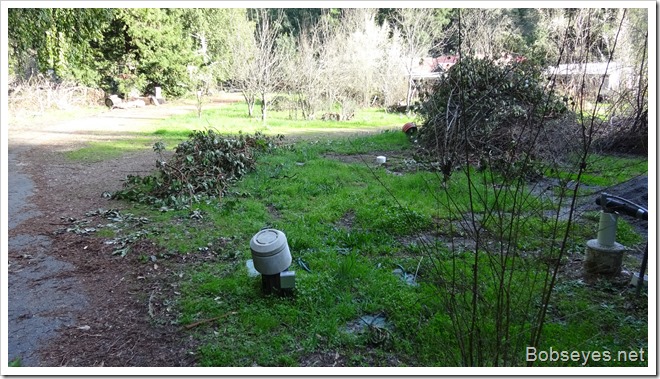 Of course I had to bring all the brush from the plum tree I just cut off to the brush pile too.

I was able to throw all the brush up on top of the pile and now have a nice big habitat pile. Lots of my plum trees are blooming and if this last rain storm gets finished and we have some sunny weather like we are supposed to, some of those blossoms might get pollinated and Ill get some plums. 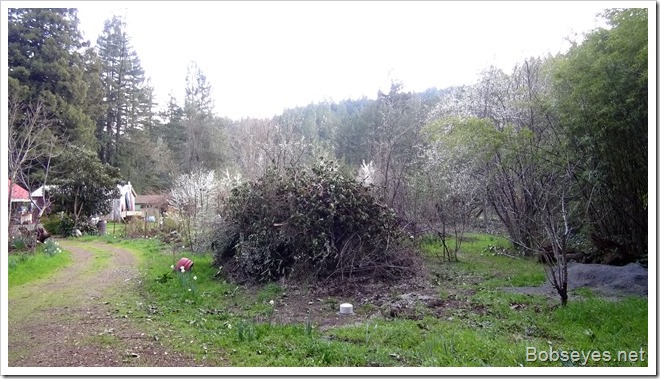 The daffodils are still looking good, but are starting to fade a bit as spring marches on. 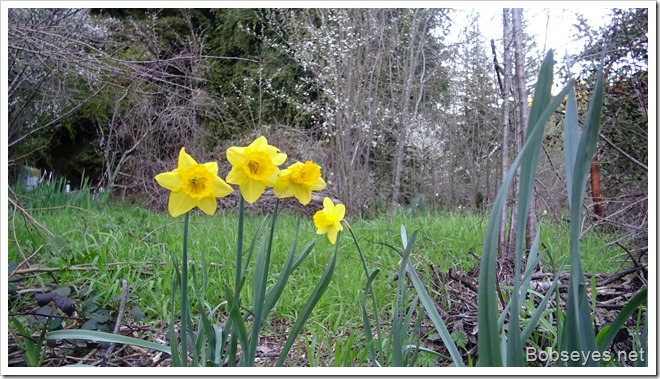 Tomorrow I will finish prepping the van and it should be ready to roll either Sunday or Monday depending on the weather.

And that was another day down.