Last day of prep for my trip

This is the last day to get it all together for my trip to Arizona tomorrow morning.

I needed to load my kayak stuff but then I thought I better wash it off to keep the non native people happy.

And as long as I was washing the boat I washed all the van windows.

The operation looked like this. I didn’t bother washing the van as it will just get dirty again. :O) That’s why it’s painted with a funky paint job, straight from the spray can. 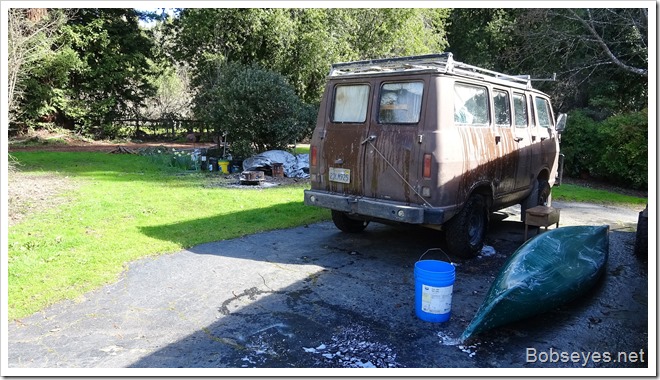 Once that was done I could load the boat. 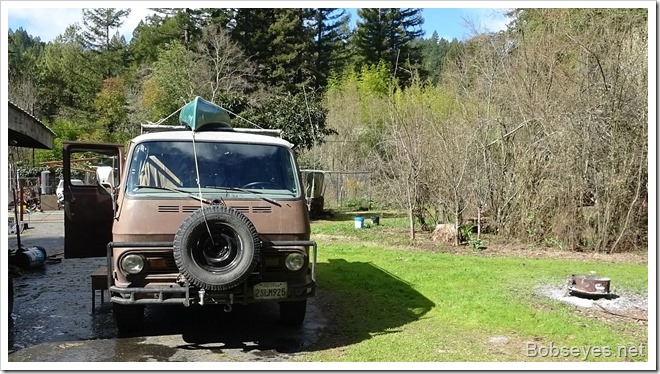 I didn’t have a lot to do to get the van loaded but I spent the rest of the day putting stuff into it and making the bed in there so I’ll be nice an cozy.

Rat in the trap

When I went out to feed and water the chickens this morning I noticed my bucket rat trap I made the other day was set off so I had a look at it.

And yes there was a rat in there but as I was checking things out and not being very careful it got away.

But it did teach me something

To start off it taught me that this trap will catch rats when the other ones won’t as they seem to be trained to the standard stuff and won’t touch those things. These rats and the mice are real well trained not to get caught.

I had this trap in the chicken pen when I first made it and thought that won’t work because the big rats can’t get into that area so I moved it out the other day just outside the coop.

Interesting enough the big rats came into the chicken pen that night. I haven’t figured out exactly how they get in yet.

Anyway I set the trap outside and the first night some of the food outside the bucket was eaten up but not any of the inside stuff.

But last night one got into the inside stuff and set the trap off. 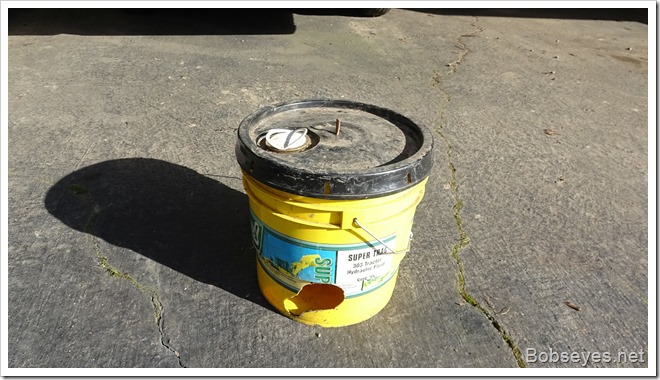 The trap consists of three pieces the bottom, the top and the set stick that triggers the trap. I glued some little sticks to the set stick just to help the rat set it off. There’s a hole in the middle of the bottom bucket to set  the stick in. And there’s a five sixteenth inch hole in the top of the top piece of bucket to put the set stick through and to hold the stick while setting the trap. There’s a small notch about one inch down from the top of the stick to catch on the lip of the bucket hole. When the rat moves the stick the top falls off the notched stick and falls and covers the entrance hole near the bottom of the bucket bottom. 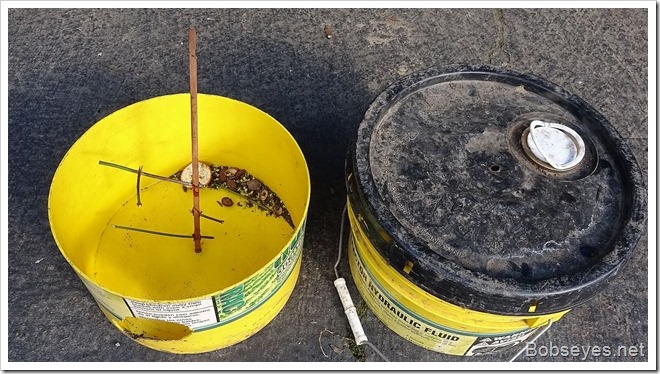 I had three little bamboo sticks glued to the main set stick and the rat chewed one off which was ok as that might have been what set it off or maybe just gobbling up the food did.

Here’s the top of the bucket showing the set hole and stick in the set position. 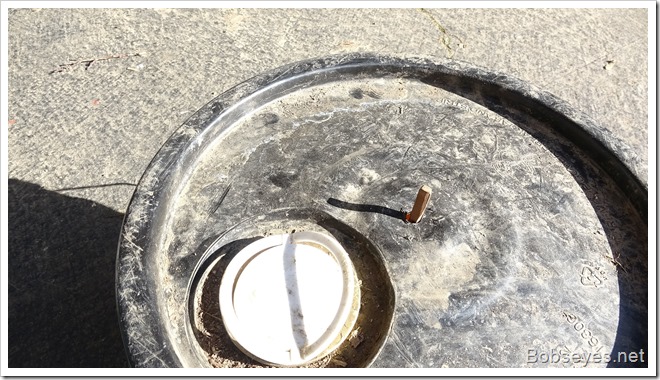 Rat chews my bucket up

Here’s what the rat did to my entrance hole. It chewed the hole bigger but still didn’t get out as the outer bucket covered the hole. 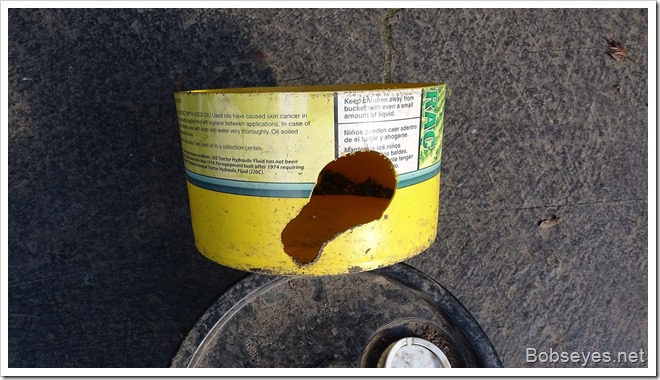 The rat taught me that I need a metal bucket but the metal buckets I  have have straight sides and won’t slide over each other.

To fix the hole eating problem a piece of metal with a hole and pop riveted to the plastic should take care of the problem. I’m thinking that with a metal bucket top over the plastic bucket bottom might work too.

No more time to play with that for now but the rat problem isn’t going away so I’ll have to deal with them when I get back from this trip.

I think I have all the stuff loaded in the van now and will be leaving in the morning when I get it going which won’t be too early.

As always when I travel I never know when I’ll find some internet access so you’ll hear from me when I do.

(Visited 275 times, 1 visits today)
This entry was posted in Uncategorized and tagged bucket rat trap construction, prepping the van for a trip. Bookmark the permalink.