I headed out for Port Orford Oregon around eleven AM a couple days ago and  drove north on highway 101. Other then hitting some rain around the Eureka area the trip went well. As I entered Oregon the rains picked up some. I arrived at my camp spot just below Port Orford just after dark and it was still raining.

Here’s my camp spot at a road maintenance lot just above 101, over looking the Pacific ocean. 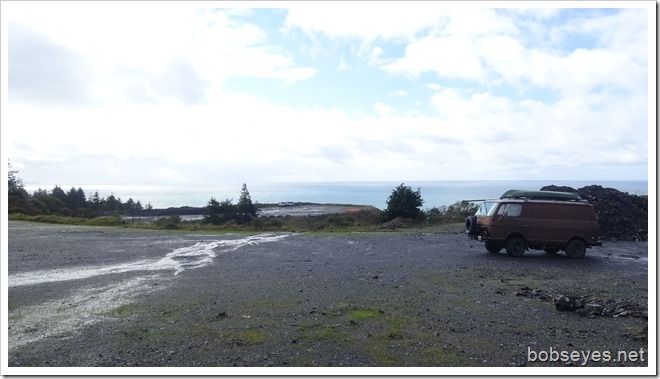 I heard some rain drops dripping back towards the rear of my van and thought nothing of it until I went to bed and found I’d parked the van just right so rain was running down the back of the van and into the door and onto the foot of my bed.

I discovered this when I went to bed, so I got up and moved the van slightly to stop the water from coming in, but the damage was done.
I was able to scoot to one side of the wet spot and went to bed as there wasn’t much I could do about the wet stuff now.

Next day looking for a camp spot

It was still raining some in the morning when I got it going.

I decided to explore up along the elk river to see if I could find a camp site, so I drove on over there and out the road for about twenty miles. I found some camps, but they were in the big trees and it was cold and wet, with a bit of snow on the ground, so I abandoned that idea. 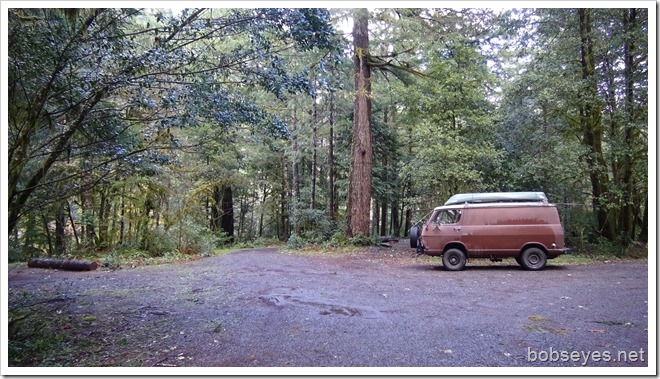 On the way back I stopped into the Elk River RV park where Steve was staying to check that out for possible camping. Steve wasn’t there and I decided the place was too crowded for my liking so I drove back to town and to the library to check my email and sent one to Steve letting him know I was in town.

I left he library just after five PM and drove down to the Port Orford harbor to check it out. 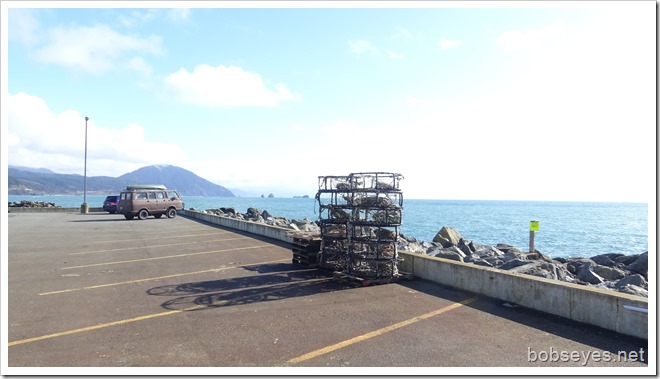 This is looking out the harbor as a fishing boat comes in for the night. 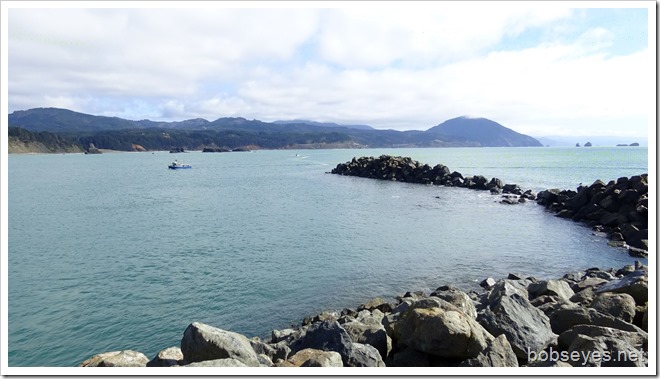 They lift the boats out of the water and put them on trailers as this one is doing. 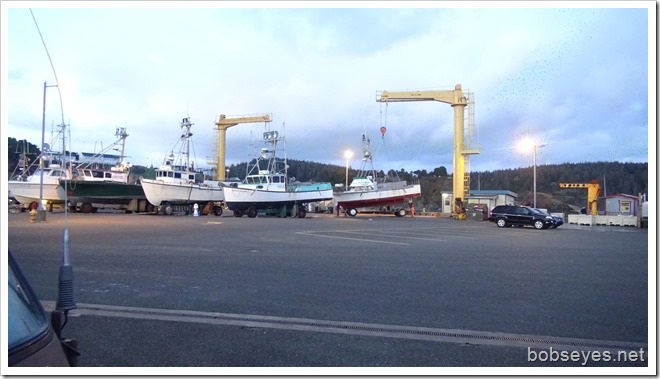 I walked around a bit looking at things. 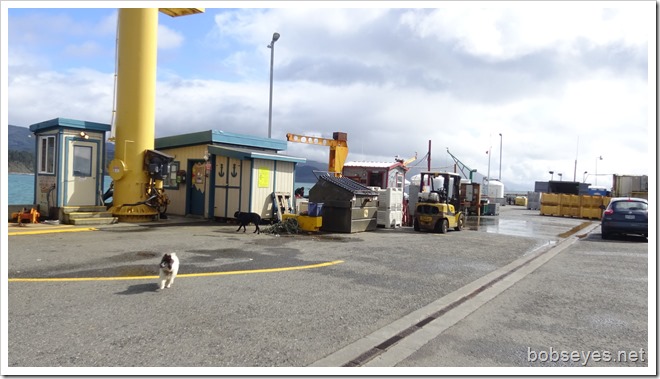 These guys were unloading crab off the boats that were coming in for the day. 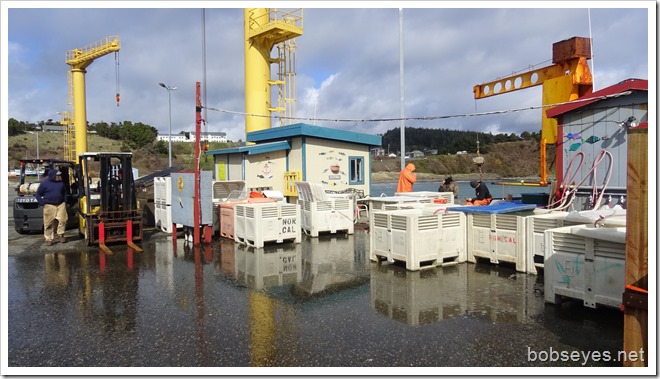 I stayed until almost dark as the last boat was brought to shore. 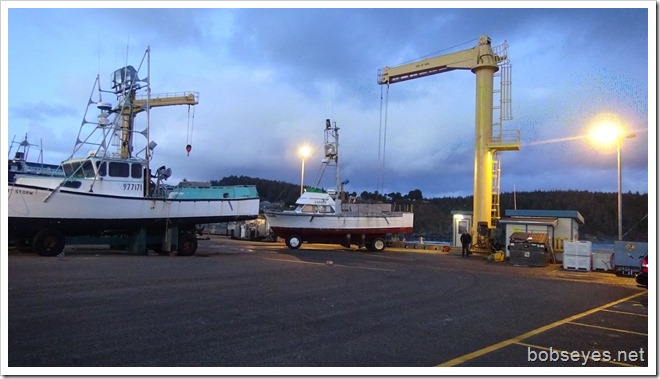 I headed on home about ten miles south of Port Orford, back to my highway maintenance spot. It’s a nice spot that overlooks the ocean.

Some fool pulls in behind me

As I was driving a car came up behind me and wouldn’t pass, so I pulled over when I could and it pulled over too, so I took off and it took off. I was wondering who the heck and pulled over and stopped. It was Steve, so we drove back to my camp spot and shot the bull for an hour or so before he took off for his home with plans to go crabbing tomorrow, which is today.

Steve was hard at crabbing when I arrived around eleven and already had two keepers.

Here’s Steve pulling in a crab ring with a keeper crab in it. 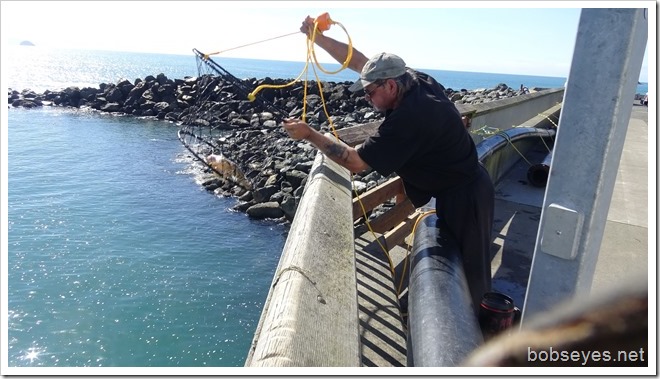 This older guy was working next to where we were crabbing, his name was Tony and he was a buyer of crab and fish. A boat came in and they unloaded it’s catch of crab. 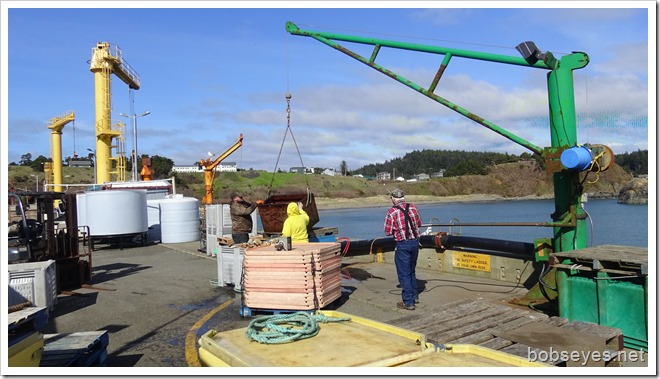 As we were crabbing two guys pulled in, one of them was John who we knew and his friend Frank who is unloading his crab trap. 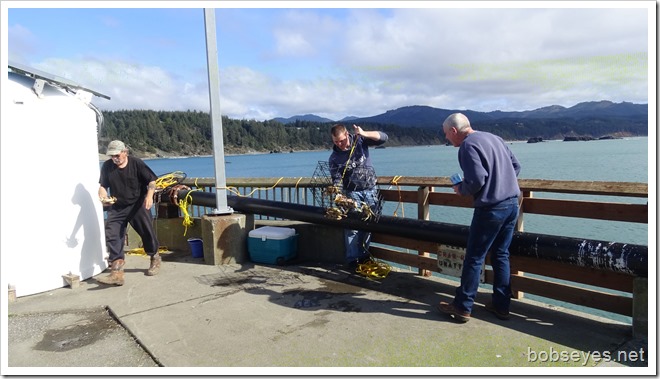 I think only one of these was a keeper. He caught three total keepers today. 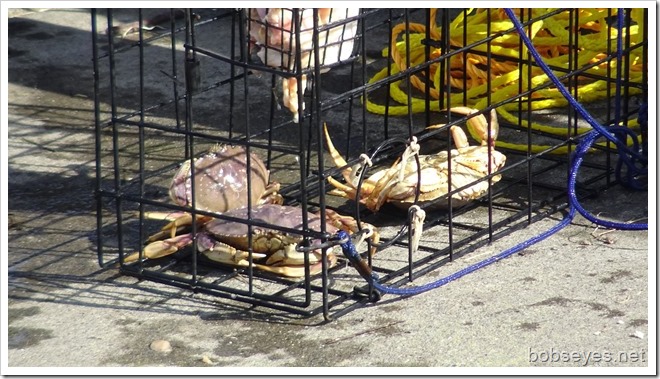 After Steve had six keepers he put his stuff away and went on home where I will meet him tonight for crab dinner.

Shortly after that I drove over to the library to write this blog and use the internet and that’s what I’m doing now. I did get a little nap in there too.

Once I post this I will drive over to the Elk River RV park where Steve is staying to enjoy some of that fresh crab.

That’s it for now, had a nice day.