Introducing the chicks to the world

I was thinking I’d like to let the little peeps out into the world today, let them out of the coop and into the run.

But I had to plug up some holes first. Some of the gates I made have too large of openings that some of the smaller chicks could get out so I needed to close them up.

Here’s an example of one of the gates that need to be plugged up for the chicks. They’d be no problem with bigger chickens. Eventually I’ll let them into that high grass but first I want them to get used to a smaller run. I still have a couple of the blackish ones that are small and can squeeze through the 2×1 inch wire. 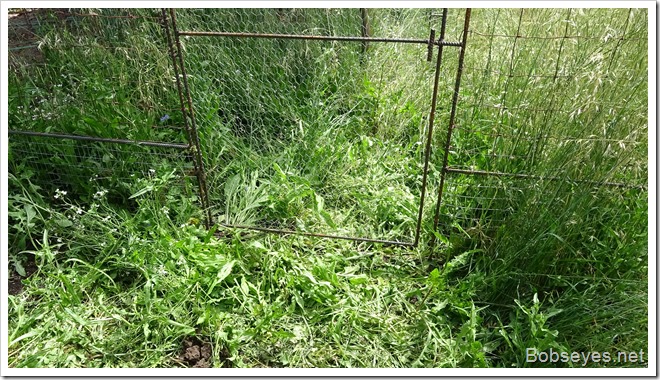 I cut some plastic pipe and wired it in place. 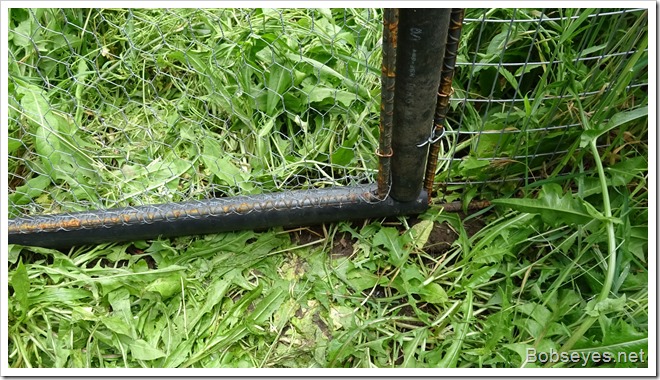 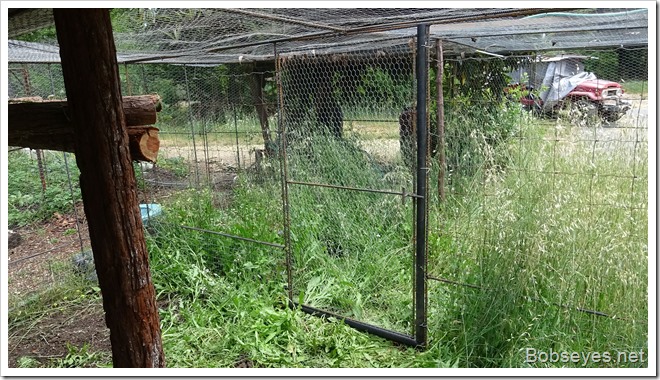 I had several other gates I had to do that to and some I did the tops to keep the wild birds out.

Opening up the door

After that was done I looked around to check for holes and it looked ok, so it was time to open the coop door to the outside pen.

The door is open in the back here and the chicks don’t know what to make of it yet. 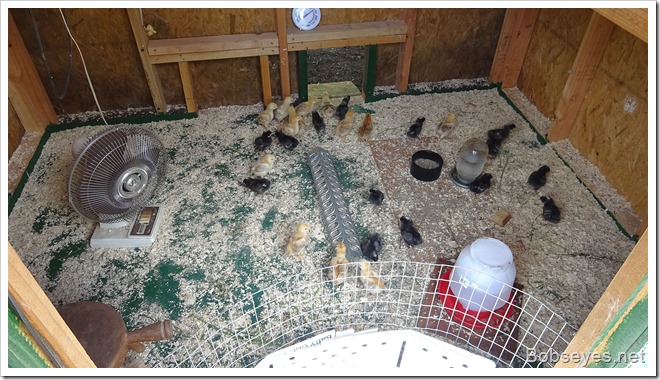 This was the first peep to venture out at least onto the open door. 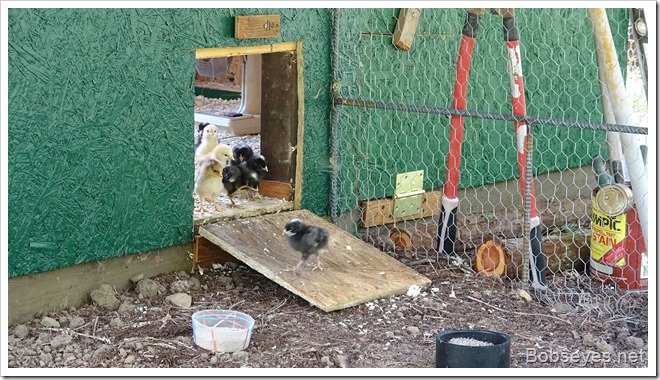 After a lot of going back in and out a bunch of it’s buddies joined in. 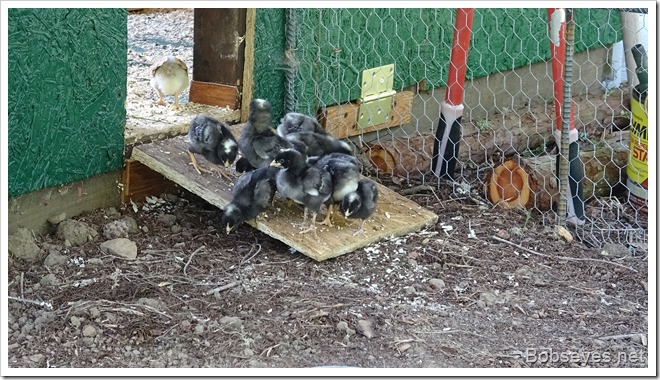 They finally made it to the ground as I put some seed on it to help convince them. 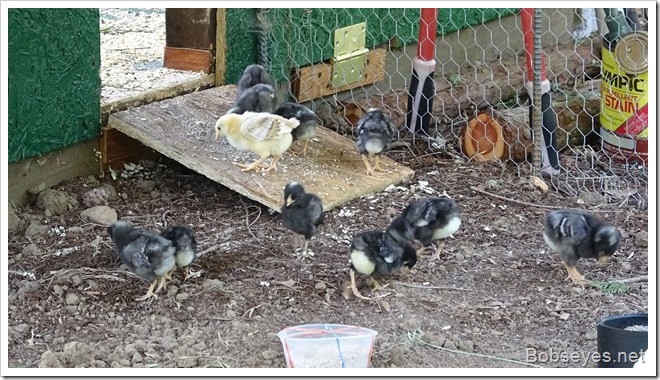 After a short time I noticed they were all bunched up here so I had a look. They were getting their first dust bath in some good dirt. 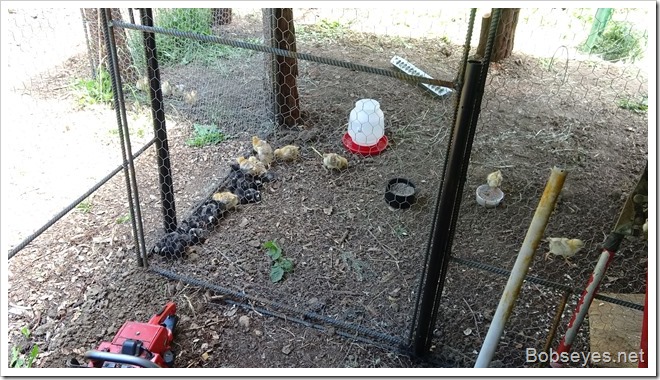 It wasn’t too long before they were all over the pen checking things out and pecking away at everything. 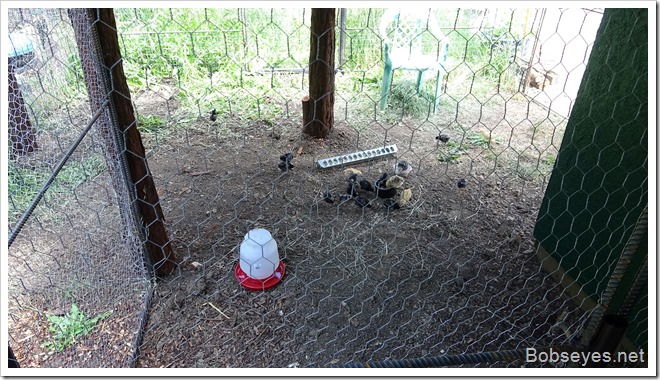 They seemed to like to get into the tall grass. 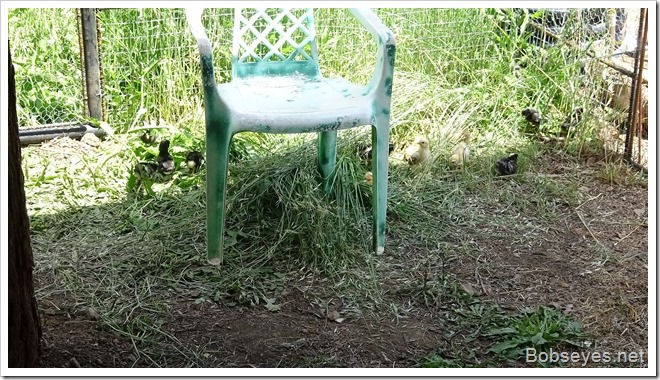 They found a worn and they knew what to do with it. Grab it and run to keep it from the other guys. 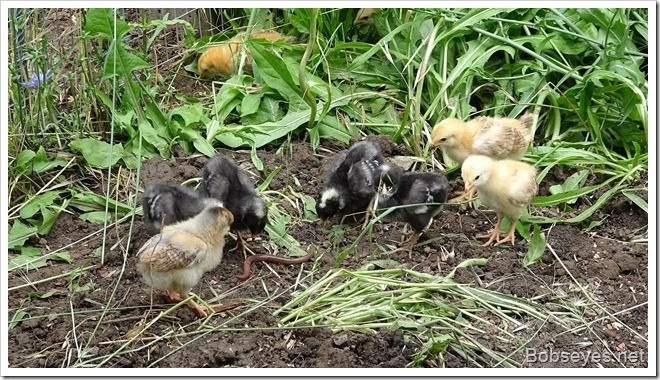 I checked on them throughout the day sorta like a sheep herder watching his flock. 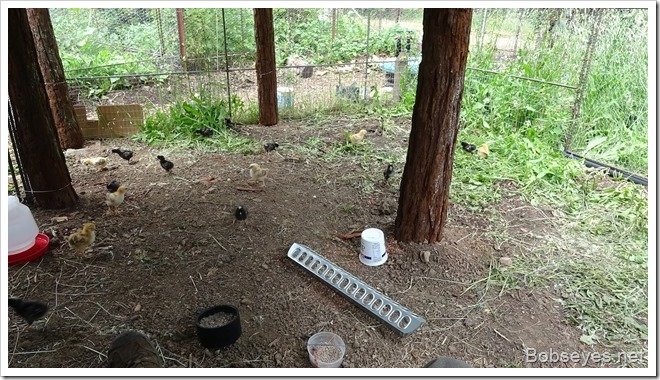 They seemed to be doing just fine having a good ol time. 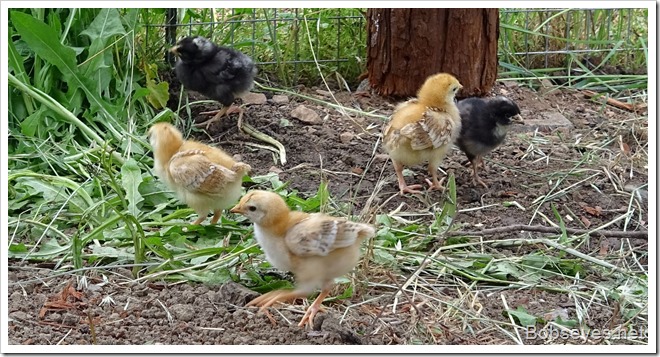 There were one of two of these little black ones that could get out the 2×1 inch wire, but not the one inch chicken wire. Just about as soon as they’d get out they wanted back in, I let this one back in  the gate. 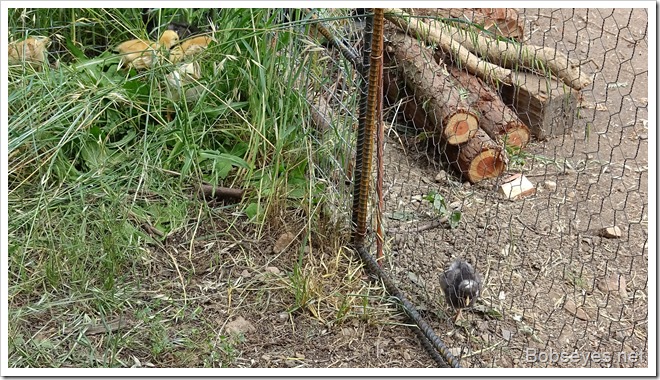 Turning the ground to plant seed

I dug this plot up with a shovel and planted some bird seed in it. I had to turn it over twice to break it up. The grower panel in the back drops down on this, but I didn’t seem to get a picture of the finished product. 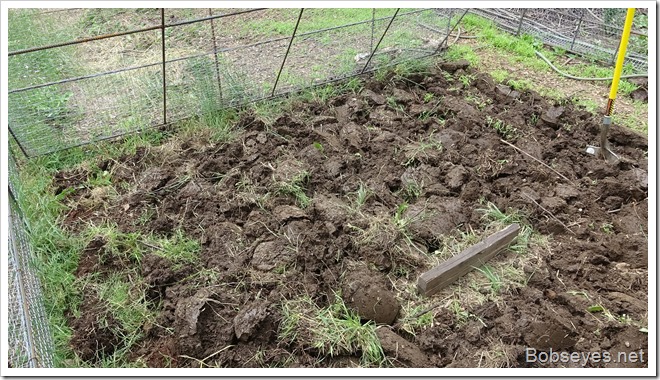 Here it is with the seed in the ground. I did a little dance around on it to pack it in. The automatic sprinkler will come on soon and wet it down. 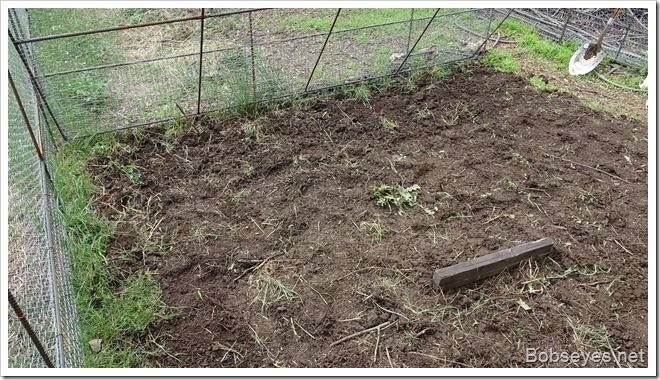 As long as I was digging I collected some nice big ol worms for the chicks. I fed them to them and they had a blast with them running all around trying to keep the others from getting the one they had.

I found the yard empty of chicks around 4PM and looked in the coop and they were all huddled in a corner having a nap. Playing in the pen must be hard work. I thought they might be in for the day, but they finally did come back out and were out until just before dark.

I closed them back up in the coop for the night. They seem to like it outside a lot and I thought some of them about doubled in size today.

Working on the roosts

In the evening I started working on my second roost in another pen. I did some more digging for cement blocks so the chicks got some more worms.

I didn’t quite get this roost done, but I got a good start on it which I’ll likely finish tomorrow.

I discovered the shipping label from the chicks shipping box and found out they had given me another free chick I didn’t know about and don’t have which means my brother has one of my chicks or at least I hope he does. If the chick can be located that will bring my total to 32 peeps.