It was a nice sunny day out and I didn’t have anything planned for the day, so.

A yak day was declared and I headed down to the river just after noon.

I thought I’d stop at Monte Rio to see if any fishermen were there fishing.

I didn’t see any fishermen’s boat trailers in the parking lot when I got to Monte Rio but I did see this big truck parked on the boat ramp and when I drove by I could see they were just releasing some fish into the river so I parked and went over to see what they just dumped in the river as the truck was a Fish and Game fish planting truck.

I missed the fish release as far as photos. I asked how many fish they just released and the guy said 100 which meant they released some big fish, not little ones. I asked what kind and the answer was Steelhead. 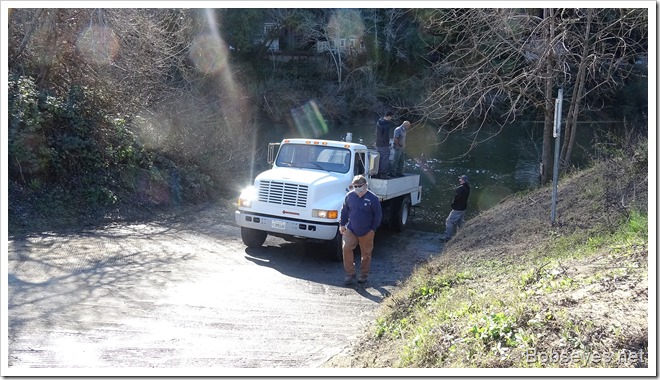 On the way home I stopped to give John S. a fish report and he told me they bring hatchery fish that have come back to the hatchery after being out in the ocean and have returned a ride back down the river to give the fishermen another chance at them as they have too many at the hatchery to collect eggs from.

Unfortunately I missed the release photo but here’s where they dumped them into the water. They made all the bubbles as they entered the water. 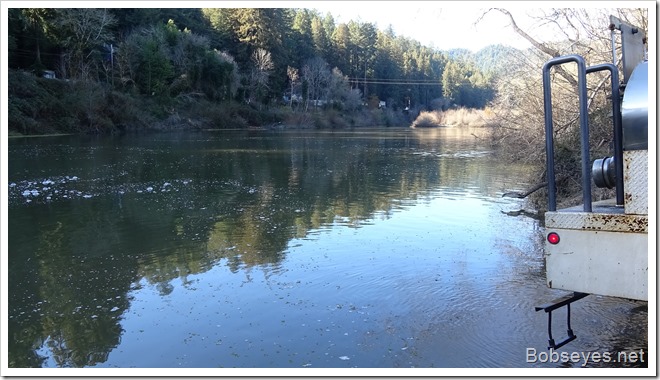 While I was there a fisherman pulled in with his boat to fish named Jeb who I knew once he refreshed my mind as my name recall is very bad these days. He was going to put in his boat so I told him about the 100 fish plant and decided to head to Jenner to see if there are any big spawning fish coming into the river from the ocean as it’s that time of year.

It was nice and sunny and the wind was down as I pulled into Jenner to launch my boat.

Once in the water I headed on down towards the open river’s mouth looking like this. 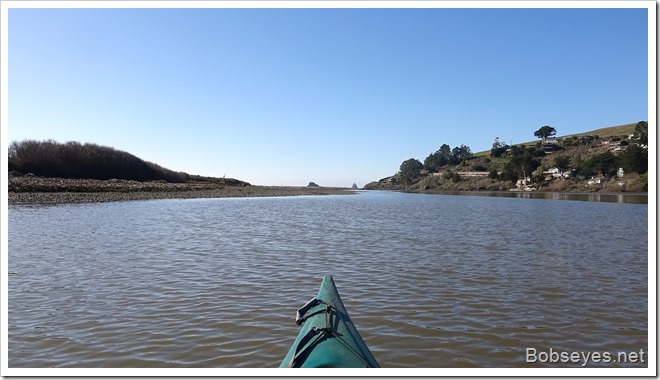 As I paddled along I saw some big splashes up ahead just out of camera range and I saw some red which is fish blood as a big sea lion caught and ate one of the big fish coming in to spawn.

Here’s the best I could do with a  picture of the sea lion which already devoured the big fish. 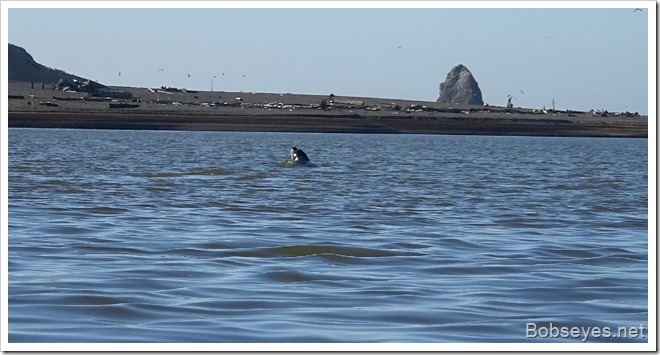 The were one or two sea lions hunting for big fish in the estuary as some big fish were coming into the river from the ocean and headed up river to spawn.

I continued on down to the open river’s mouth area just up ahead. 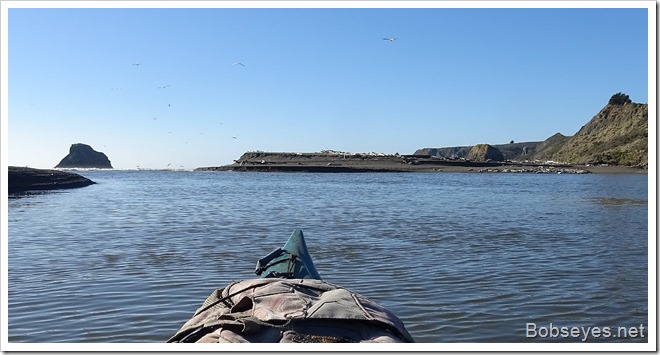 There were a bunch of harbor seals laying on the beach just to the right of the open mouth. 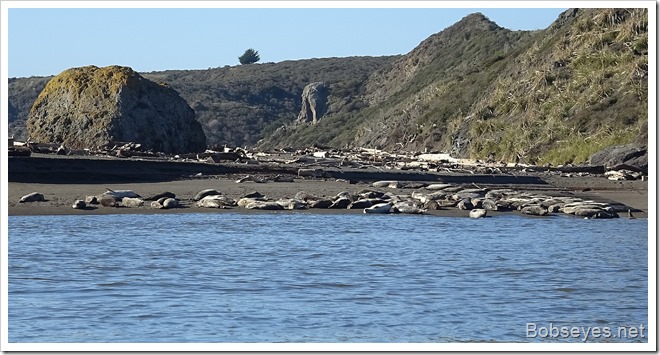 I pulled into the spot  in the open mouth to sit and have a look around. 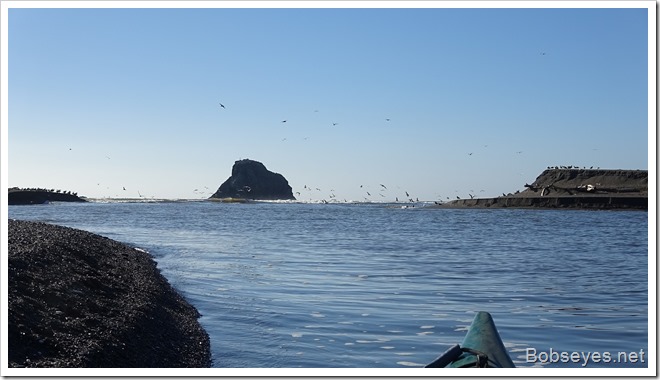 The ocean wasn’t too rough but every once and awhile a bigger wave would splash against the jetty rocks. 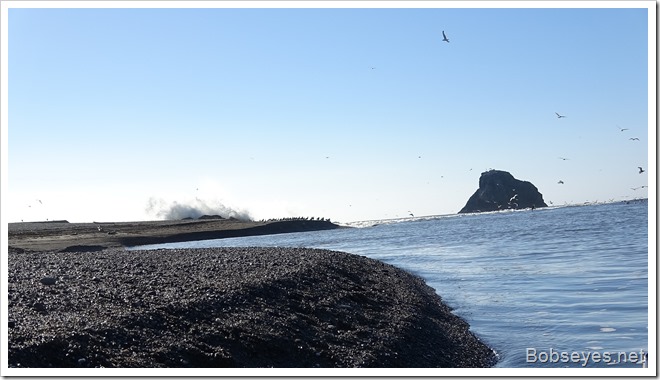 The were some gulls resting on the sandy beach across from me. 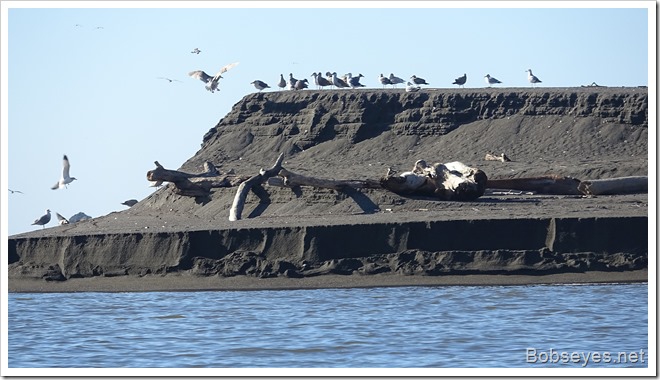 And there was this guy setting up his fishing pole to fish which is a no no down here as this area is a fish sanctuary which means no fishing, except for the wild critters. 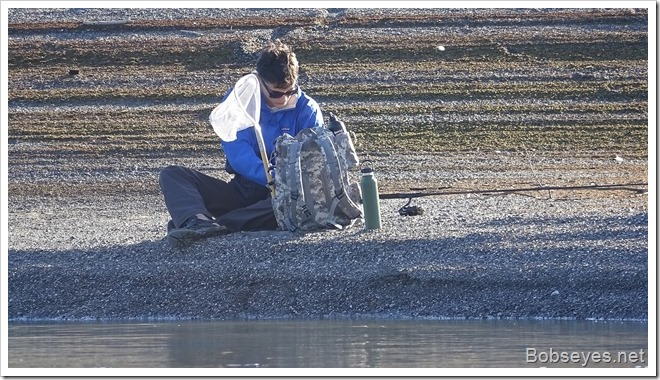 I very nicely informed him that there was no fishing down here just for his information but as far as I was concerned he can do what he wanted as I’m only down here to enjoy myself. He didn’t know about the no fishing and decided not to fish and thanked me for the information.

While I was there a big sea lion chased a big fish right up to him while trying to catch it but the sea lion missed it. This all means there are steelhead coming into the river to spawn.

I hung around the mouth area for a bit then turned and started back up the river going by these three ducks. The one on the right is a scratching male merganser and the others are golden eyes. Note the one of the left has some kind of worm in it’s bill that it soon flew away with. 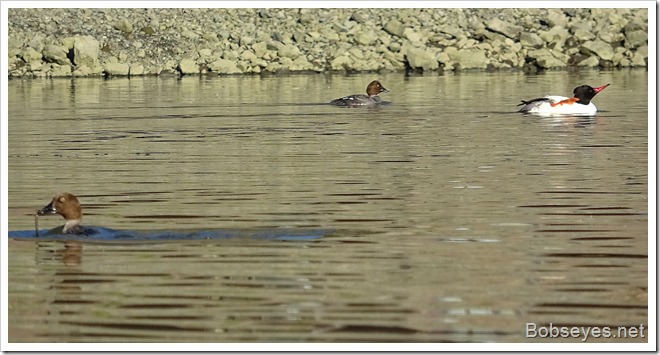 I paddled up along the island on the right and sat around the upper end of it for awhile enjoying the day. 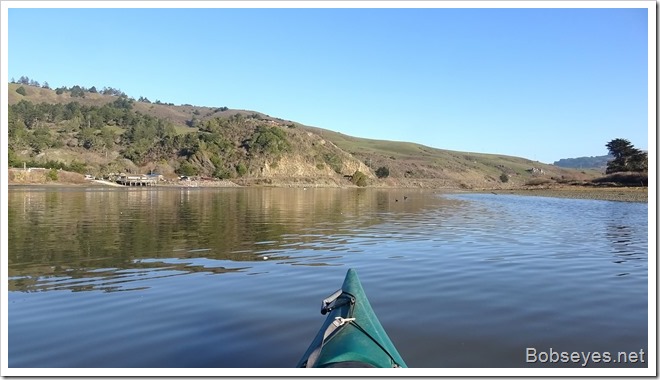 When I headed for the boat ramp I paddled by this great blue heron just sitting there getting some sun. 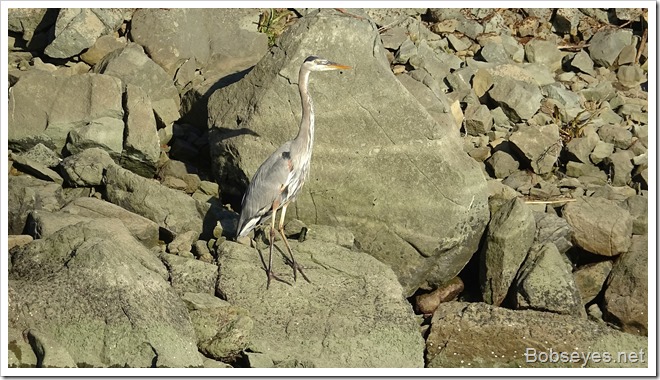 I made it back to the boat ramp just before 5. 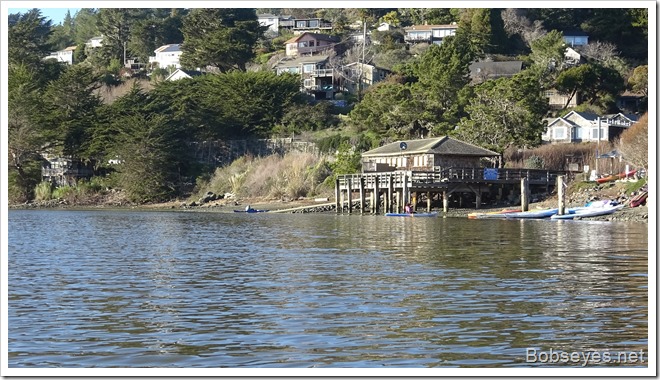 I got the boat loaded and  drove on back to Monte Rio where there were now three boat trailers parked in the lot. These fishermen all have cell phones so the first guy Jeb must of called around a fit or some one else that saw the guys planting fish did.

I continued on towards home but decided to stop and give John S. a fishing report as he fishes all the time. John and I shoot the bull for a bit then I continued on home. Before I left John loaded some fence wire he had into my car that he didn’t need but I did.

Back home the chickens were already on the roost so I shut them up for the night and went on in the house.