Plans Change, Puttering, Woodchips to the Raspberry Patch and a New little Peep

Once I got it going this morning I decided to go up and do some work with the bulldozer. I aired up the quad tires and got together what I would need up on the hill. But that’s as far as I got with that today. 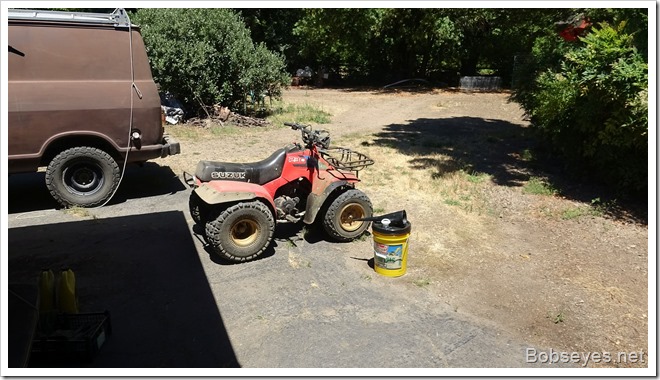 My brother Tom was prepping the garden plot I just fenced in. He plans to plant carrots in most of it and maybe some pole beans along he fence line. 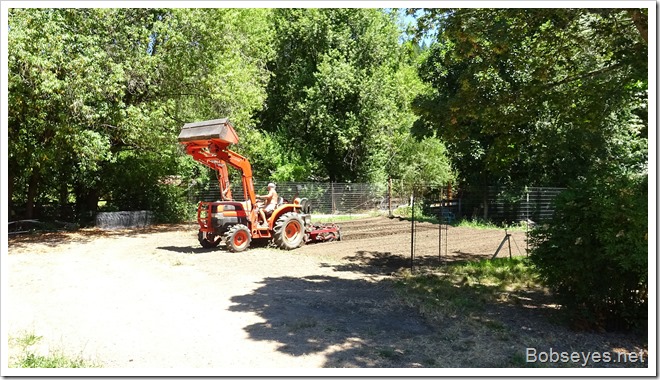 I puttered around the yard and set some sprinklers watering the weeds for the chickens to graze on. It also waters  my fruit trees at the same time. 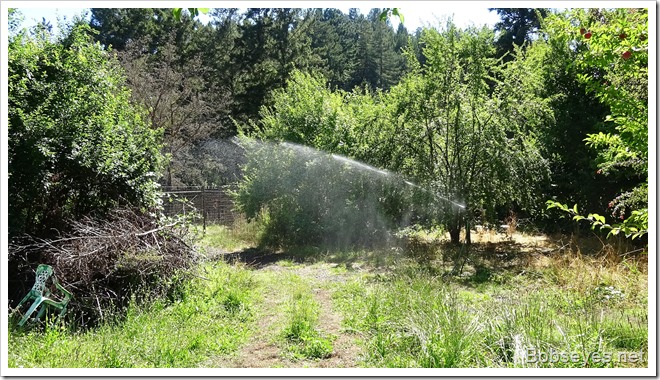 Worked in the berry and garden pens

I chopped some unwanted weeds and growth in the blueberry patch but it’s hard to see with all the potato plants growing in there. 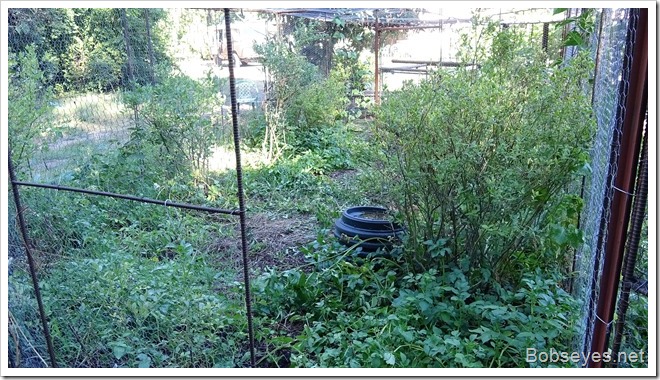 I also pulled some of the weeds out of here which was supposed to be my main garden area but instead is mostly a weed patch. There are some nice pole beans growing along the edges up the fence. And the small raspberry patch in here is taking over on the left. 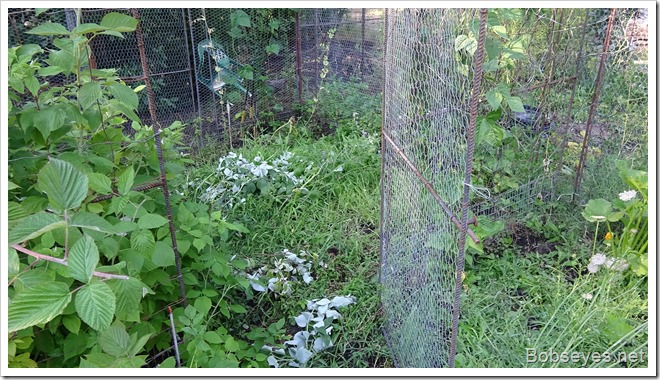 Weeds for the nursery chickens

I mostly pulled the weeds in the garden pen to feed to the chickens that are in the nursery and can’t get out to graze with the other guys.

Here’s some of the weeds I threw into the mulch run for the chickens and some peeps too. 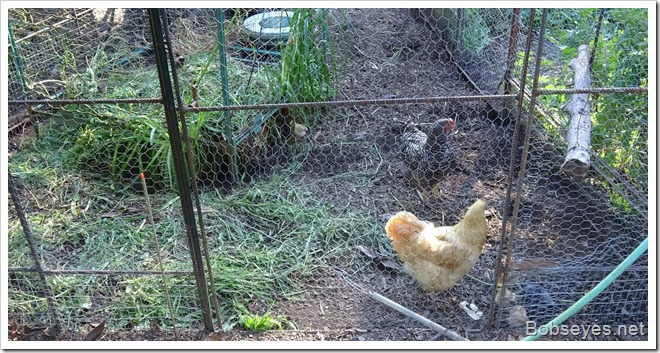 Chickens have it good

My sunflowers are starting to bloom in the grow pens and are looking real nice. My chickens sure have a nice environment, eh. 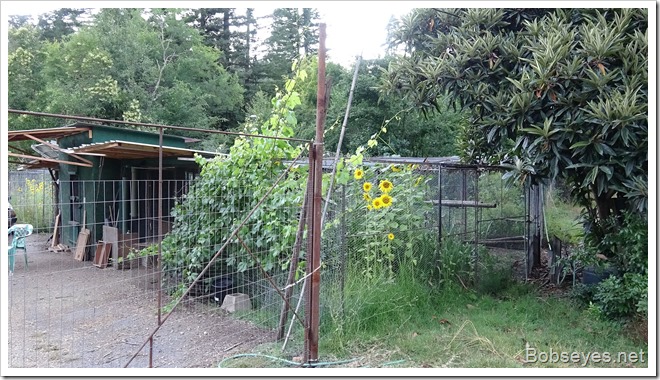 I was in the house with coffee when I heard a big truck out in the yard. I went out to investigate and found Tom getting a truck load of woodchips from the power trimming guys. He saw them out on the road and made arrangements to get the woodchips.

So we talked it over and decided to put some woodchips between the rows in the big patch to encourage the plants to spread. 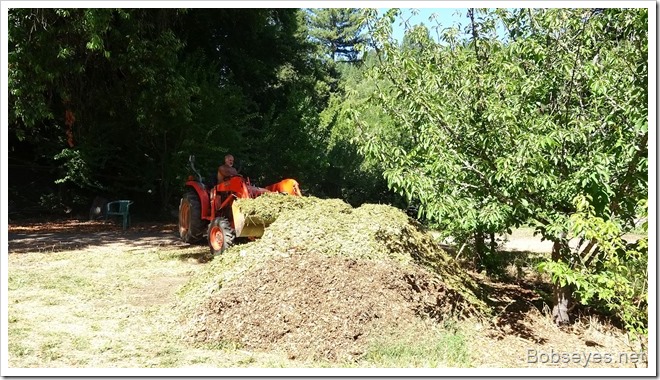 To move some of the woodchips. 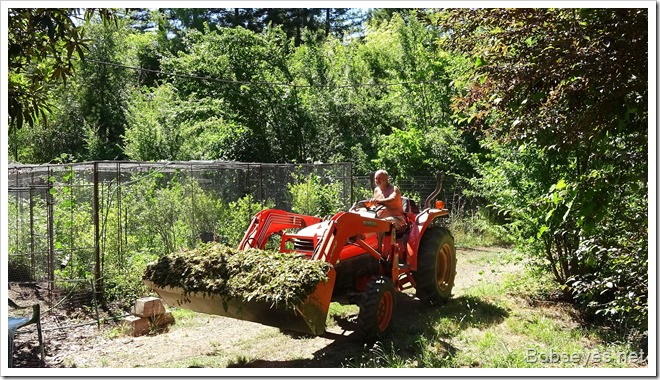 To the big patch of raspberries. 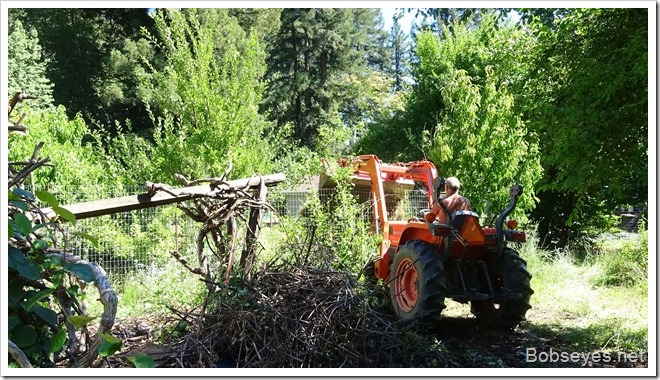 He dumped this big pile of woodchips into the raspberry pen. 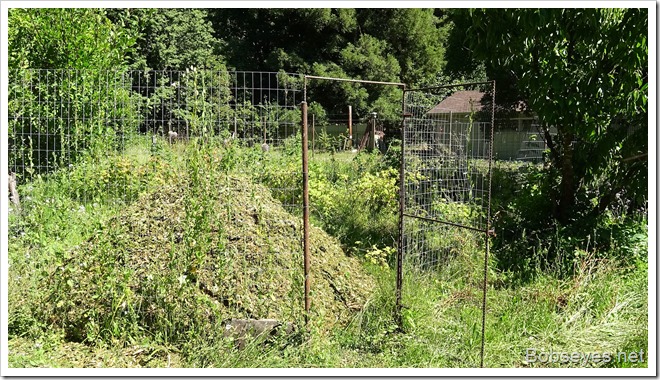 And I got my wheelbarrow and loaded and started moving woodchips to the raspberry plant rows. 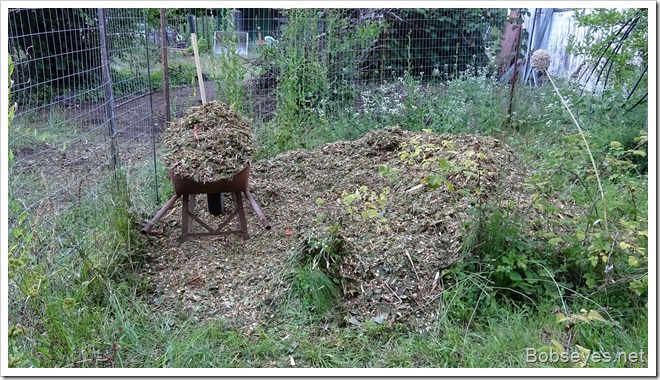 I almost completed one row. I will turn the chickens into here soon to spread out the woodchips. Might as well put them to work doing what they like to do best, scratch and eat. 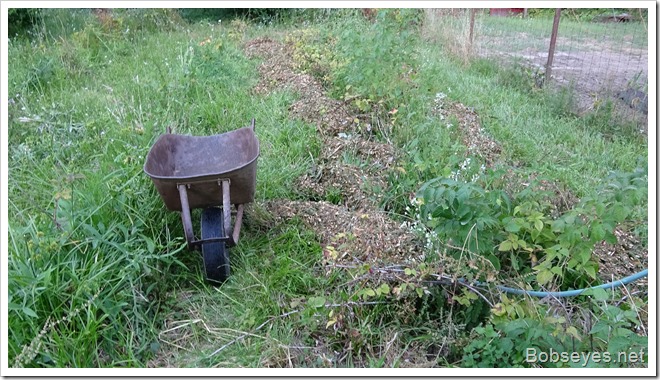 The chickens can come in as soon as I pick the ripe raspberries likely tomorrow. So far the chickens haven’t eating any of the raspberry leaves but I think they would eat the ripe berries so I’ll pick them all before I let them in. 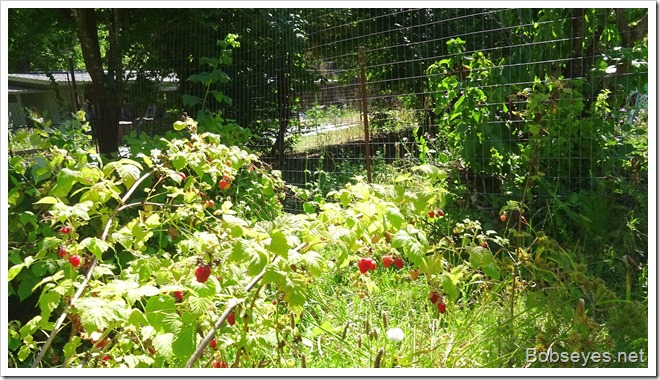 Tom kept working on his garden rows and applied some fertilizer  mulch on a couple of the rows so he’s getting closer to planting time but still has a bit of work to do, like water and plastic weed cover. I have to keep the chickens out of here until we get it fenced back up. 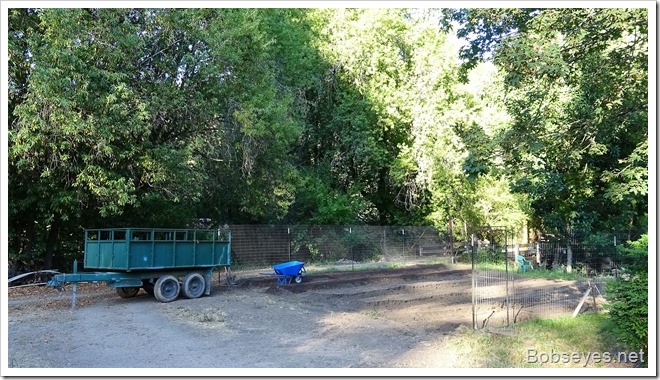 Hens that want to nest

Just before dark I checked the chickens. These hens should be up on the roost with the rest of the chickens but they are broody, which means they want to nest so they stay in the nests over night and most of the day. I take all the eggs out from under them as I think I have enough little peeps for now. Other hens come in and lay eggs with them so they’ll sit on them so I constantly check for new laid eggs. 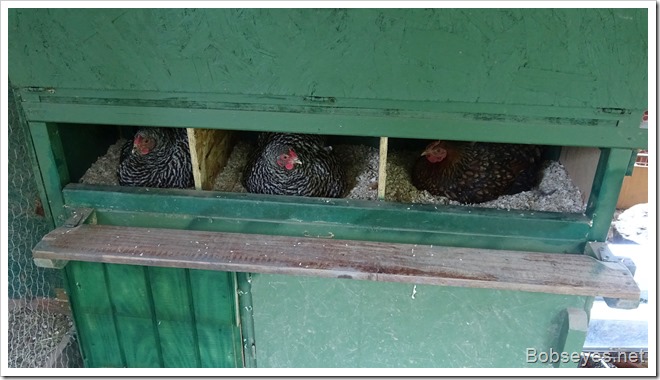 Getting another little peep

My assistant Dominique said the chick that got thrown in as a bonus that my brother got recently with his chicken order was getting overly pecked on at my brother’s chicken coup so just before dark I grabbed a shopping bag and walked out to his pen to get the little bird as it was the only one of it’s color in the flock of about a 100 peeps.  My brother raises eggs for the farmer’s markets.

Here’s the little peep I brought over. I’m introducing the little guy at night as it’s supposed to go better. 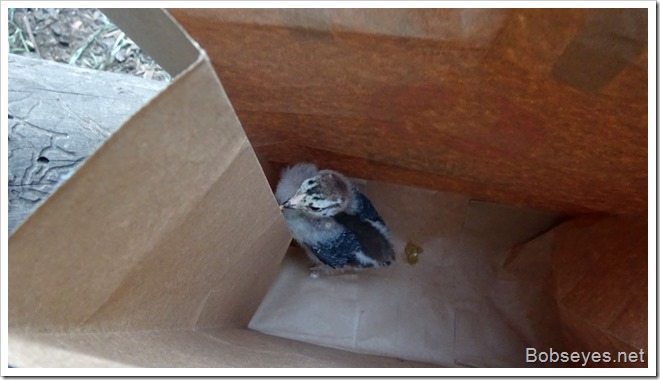 The little peep might have been pecked on all the time at my brother’s, but when I put it down with some of my chicks it stood it own with the bigger chicks.

I checked again after dark and couldn’t see it so it must have been able to get into a box with some of the other birds. So all looks good.

That was my day for a good one.I got a few things done and mostly took it easy except maybe for the moving of the woodchips but that gets racked up as good exercise, much needed at my age.