Plans Change and I Kayak at Monte Rio With the Gang

Even though I wasn’t going kayaking I did

I wasn’t planning to go kayaking today as I wanted to stay out of the sun. So once I got it going I hopped in the car as I decided to do some visiting and just maybe yak later in the day at Monte Rio.

So I drove down to Ray’s house who lives just down the road. When I got to Ray’s house there were a couple of trucks loaded with kayaks parked in front of his house.

It turned they were going to Monte Rio and go up river as with the river’s mouth closed it’s like a big lake.

It didn’t take much to get me to go with them.

River’s mouth opened during the night

But when we got to Monte Rio we found the river had dropped during the night which meant the  mouth had opened up and let all the  water out.

We were counting on that extra water to get us over a shallow spot just below the Monte Rio bridge, so now that wasn’t going to work out.

Ray suggested we go down stream instead so we did.

They just left the boat ramp and I need to catch up. 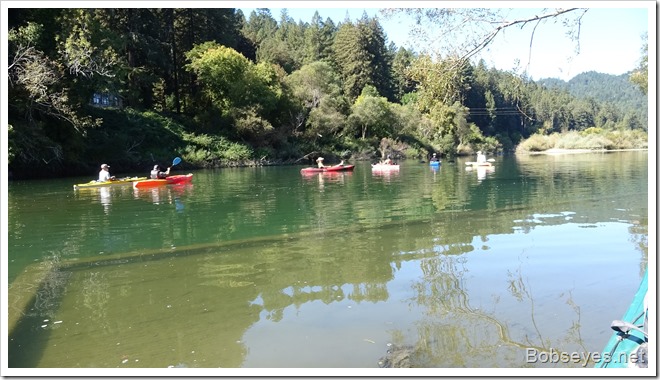 Here’s the gang drifting down the river just above Villa Grande. 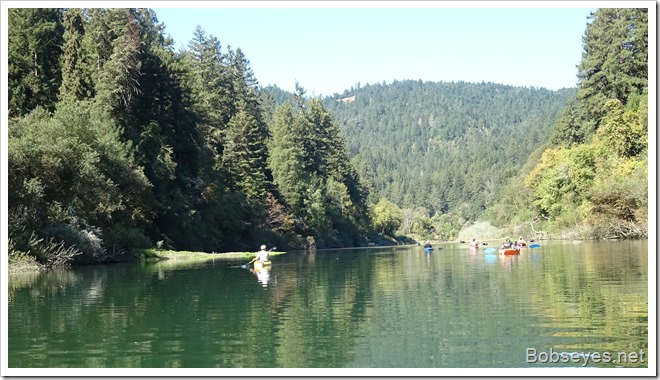 We landed for a little break at the Villa Grande hole here and it eventually turned into lunch. 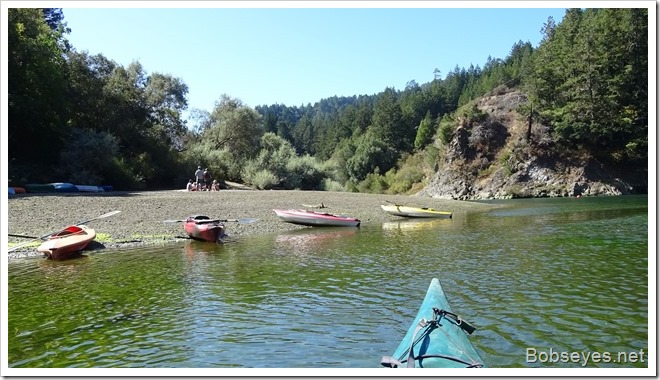 Light breeze turns the guys back

After lunch they decided to go down river just a bit which we did, but the breeze turned us around and we started back up the river.

They got ahead of me as I’m always stopped to take some photos of something. 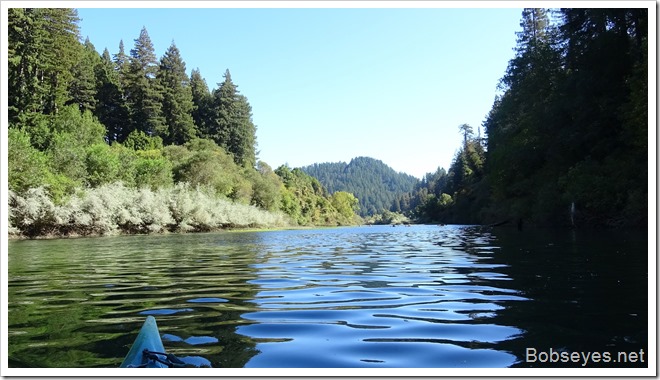 Some one tips over

Ray was back paddling with me and he said it looks like one of the gang tipped his boat over and was  in the water. 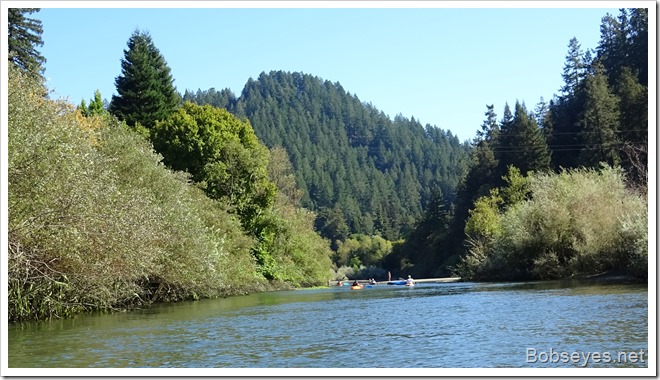 Charlie’s in the water, but he’s an old river rat

Here’s what we saw as we paddled up to them. It appears Charlie tipped his boat over somehow which was ok, except he lost his two hundred dollar eye glasses in the process. 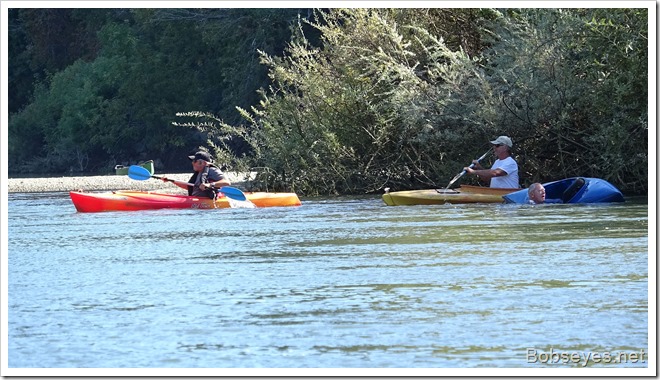 Charlie’s been on the river a good part of his life. Local river users used to be called river rats and hard to drown.

John helped Charlie get the water out of his boat. 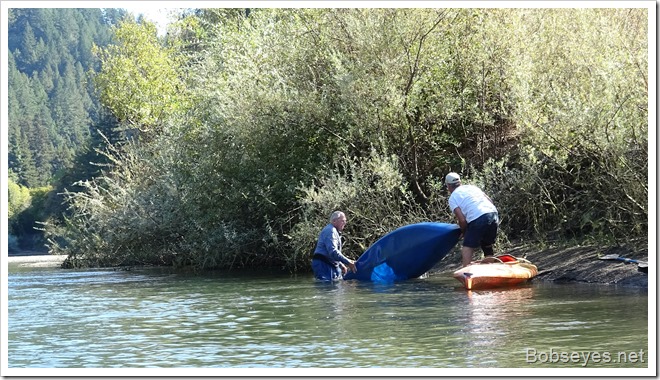 John’s going to find those glasses

John was well prepared and had a face mask and snorkel. He said he’d find those glasses for Charlie. The water was real clear so we thought he might find the glasses but after awhile everyone else was giving up on John finding them, but he persisted. You can see John in the water looking for the glasses. 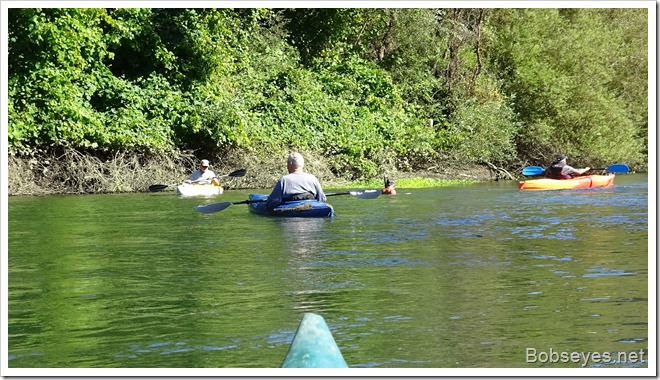 Just don’t give up

Every one but John pretty  much gave up on finding the glasses but not John and eventually just as every one was leaving for up river John finds the glasses. 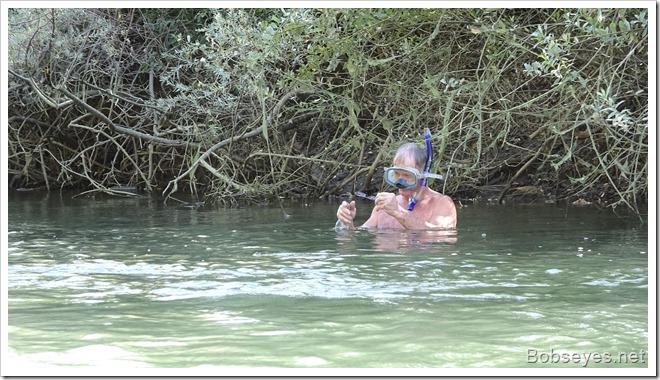 Charlie was pleased to get his glasses back.

Back on the boat ramp

It wasn’t far to the boat ramp where we took the boats out and went on home for the day. 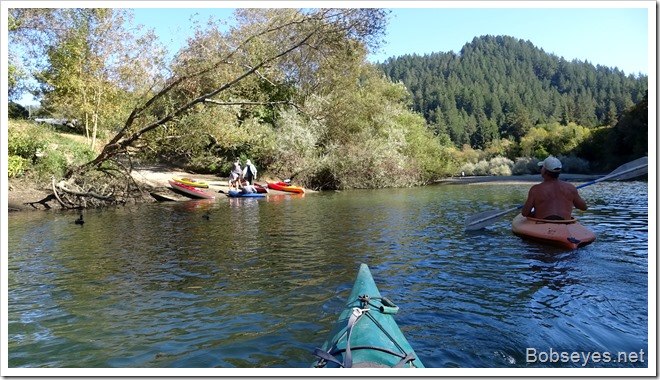 We didn’t see much wild life but that’s the way it is when you have a group of people going down the river shooting the bull on the way.