Today was a shopping day, so it seems like a good day to do a compare on a normal picture blog day to a video blog day of the same day.

During the day, every time I took a picture I also took a short video clip of the same thing. I mainly did this to learn what I needed to do to make a video of the day, mostly as a learning thing.

At the end of the day I had about 50 video clips I had to edit and reduce them down to less then twenty and put a video of the day together. My goal was to learn to do the editing in an hour or so and I think I can do that using my method.

Here’s the picture and text blog from last Tuesday. And at the end of this you’ll find the video of the same thing so you can compare. What do you think. I may do a video blog on some days instead of the normal thing I’ve been doing.

Don in comments mentioned the web page showing the river’s height down by the mouth. I had the page so I checked it and it looked like the river down there was almost 9 feet which is the height they open the mouth mechanically to stop the river flooding in Jenner so I decided to take a ride on down there knowing the wind was real strong there today so I didn’t expect to kayak.

I also waned to practice taking small video clips to work on my video skills. My plan was to take a small video clip everywhere I would usually take a picture to see how that might work out to make a video of the day so that’s what I worked on. I also took some stills so I could write this blog.

I drove on down to the river overlook just beyond the town of Jenner here looking up the river and yes it was real windy. 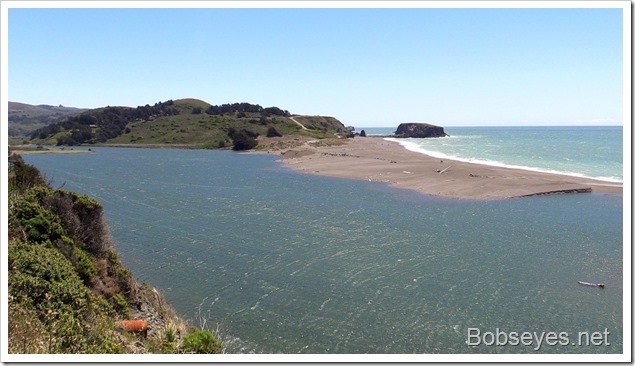 For some reason the river wasn’t as high as the webpage said so their gauges must be messed up.

Here is the closed river’s mouth looking out into the Pacific Ocean. There’s some harbor seals down there resting on the sandy beach. 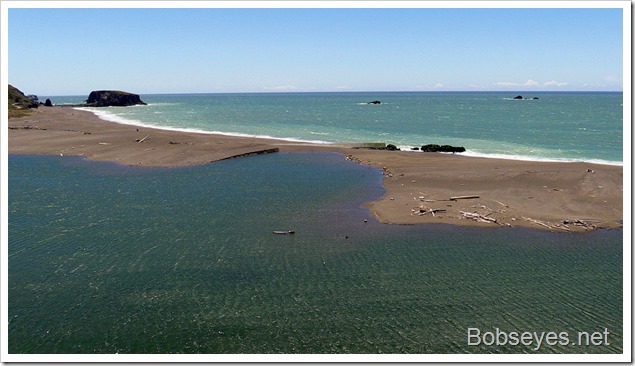 There’s the harbor seals resting in front of the old jetty. 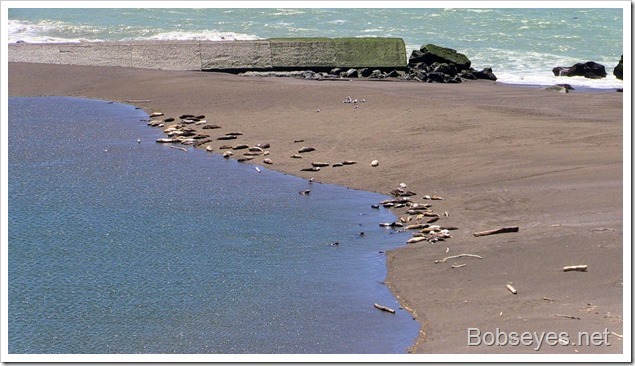 After a look and some pictures I headed on back to Monte Rio as the wind isn’t usually as bad as it can be at Jenner. I always say it’s windy at Jenner but it only gets breezy at Monte Rio. 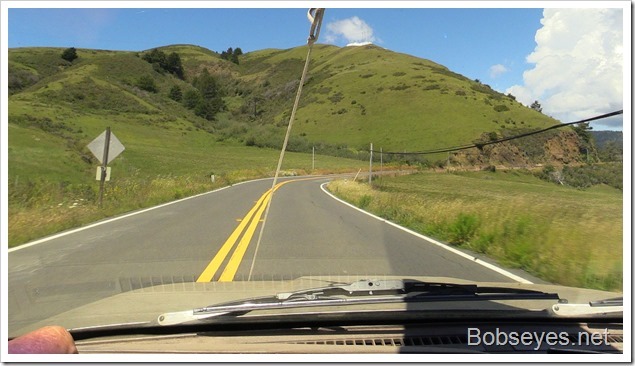 When I got to Monte Rio I headed for the boat ramp to check on the water conditions and it looked like this , not bad. 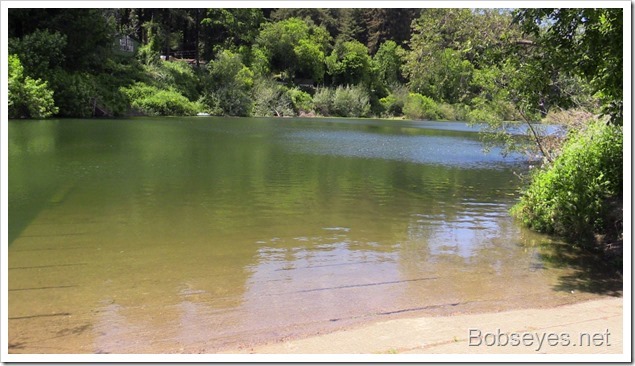 So I backed my car down the ramp and unloaded my boat. 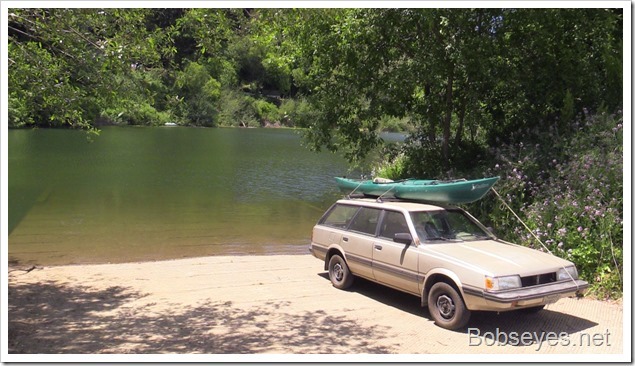 I decided to go on down the river about a mile taking my time and enjoying the day. 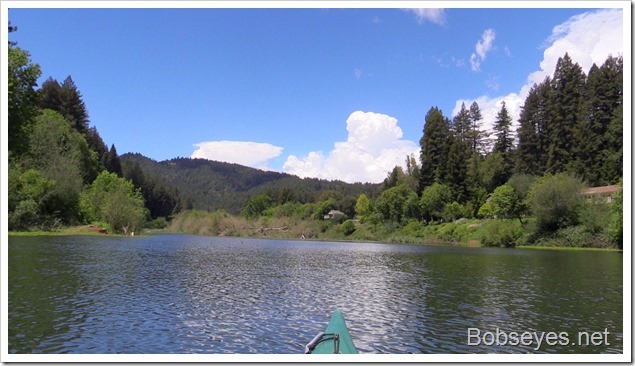 I spotted a momma duck with some little ones off to the right there. 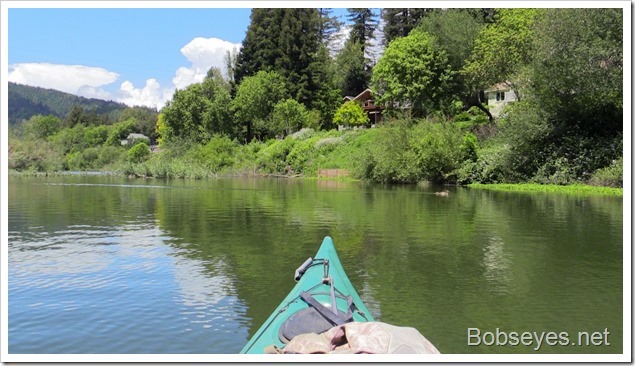 They were mallard ducks and pretty small yet. Mommy duck was close by. 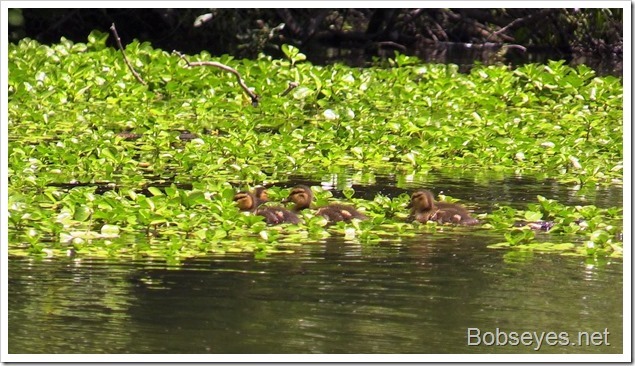 Just paddling down the river to the base of that mountain up ahead. There was a little wind but not too bad. 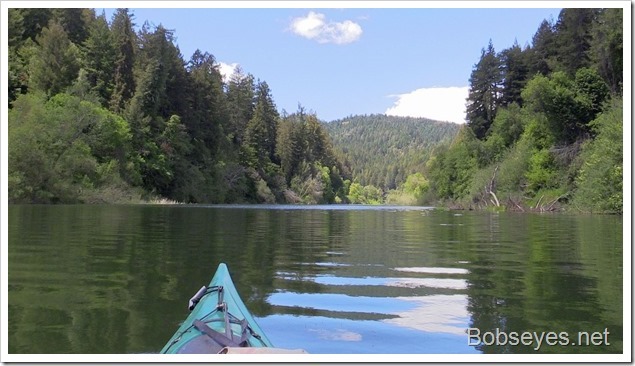 I followed this  male wood duck for a bit before it ducked into the bushes.

I made I down to Villa Grande where I was going to sit for quite some time but the wind came up a bit and was blowing me around making it hard to take videos without drifting which was hard to keep the camera on target. This is looking back up the river at Villa Grande. 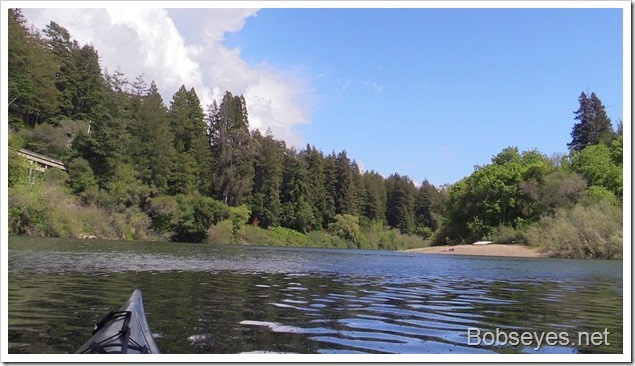 After a bit I started back up the river stopping in this spot for a break. 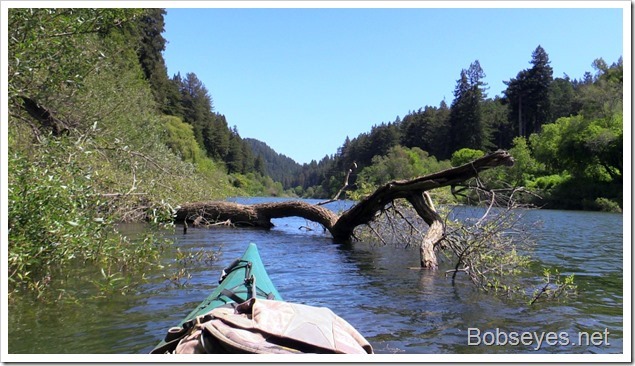 It wasn’t long before I was back at the Monte Rio Bridge where I went in to the boat ramp and loaded up and went on home. 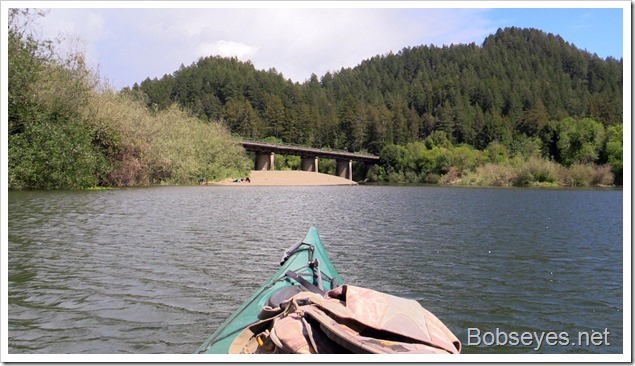 I did stop and get gas and do some shopping for food in Guerneville before continuing on home.

I did get quite a few video clips. They need to be put together and edited which I haven’t been able to get done yet. This is all mostly just to practice making videos, but as long as I’m practicing I might as well try to make a good video which I’ll post when I get it done.

The video of the same day is here.

And here’s the address of all  my videos on my YouTube Channel.

Terry in comments wanted to know about the osprey nest  tree that fell down last winter.

Bob, since the osprey nest tree fell at Villa Grande, have you seen a new nest built anywhere close by?

No I haven’t, but there are quite a few osprey nests along the river, so they likely found another one to use or are building a new one someplace.