Picking Up Brush, Tree Pruning and a Walk for Some Carrots

Was hard to get it going on such a fine day

I stayed home again to work in the yard to get ready for spring. The sun was out with no wind. Nice day.

I had a hard time getting to work, so started by picking up some of the redwood stuff that got blown out of the trees during the recent storms.

Picked up some redwood debrie

I used the wheelbarrow to pick up the stuff and took it over to my potato patch to use as mulch.I was sitting in a chair for a rest when the cat came by to check things out. 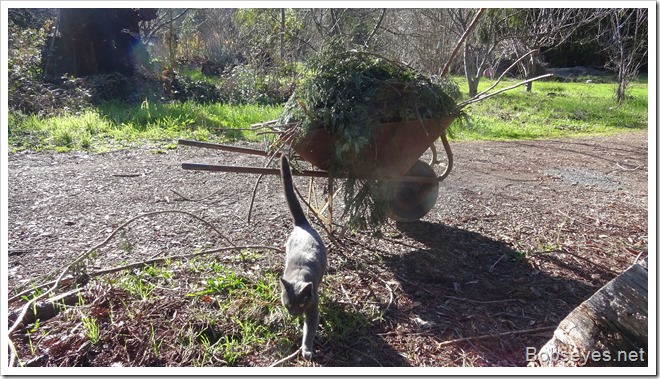 She jumped up on the throne and sat with me for a bit. 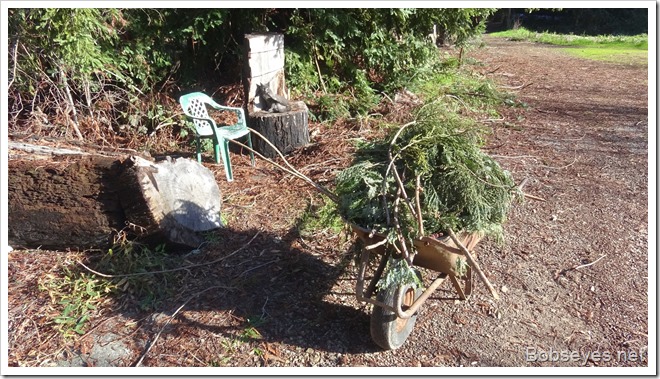 I don’t think she likes her picture taken. You know how cats are. 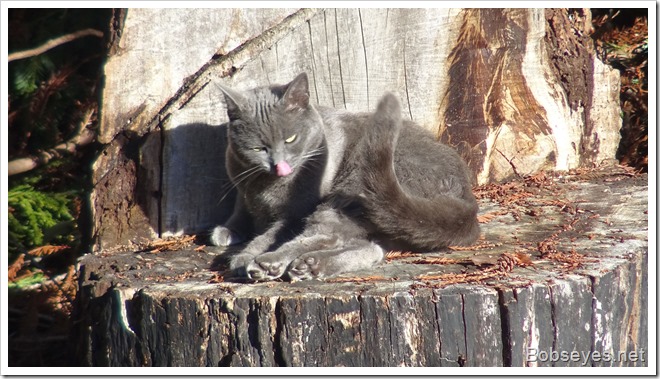 And a little bit of the pruning’s

I also picked up some of the brush I cut yesterday, but hardly made a dent in that as there is a lot of it and I only have so much energy.

Needed to knock the top out of this apple tree

I needed to cut the top out of the apple tree by the ladder. That old car is there for parts and metric bolts when I need them. 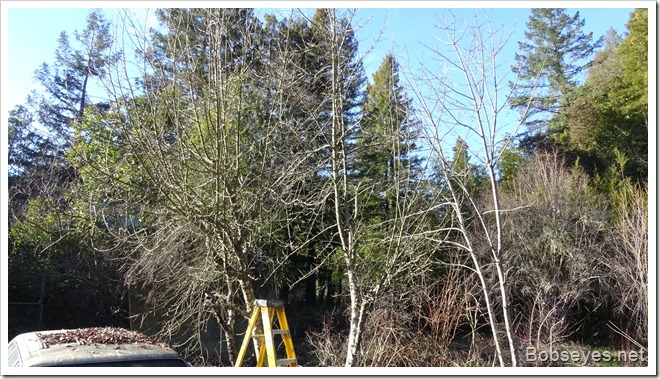 But  first sharpened the chain saw

I knew there was only a little gas left in the saw from using it yesterday and it was getting pretty dull which just uses more gas, so I found my file and a pair of gloves to grip the chain and sharpened it up. 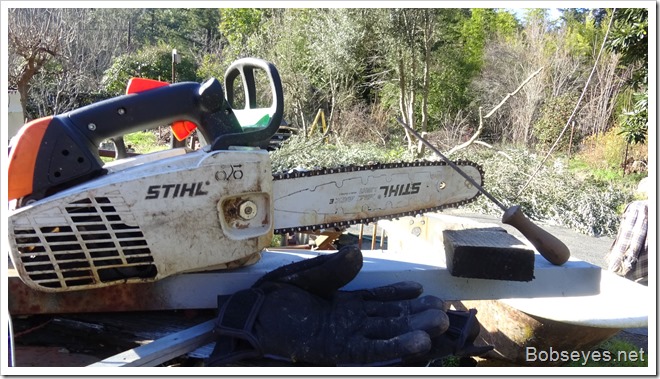 After the chain saw was sharp, I cut the top out of the apple tree making a bunch more brush to pick up. 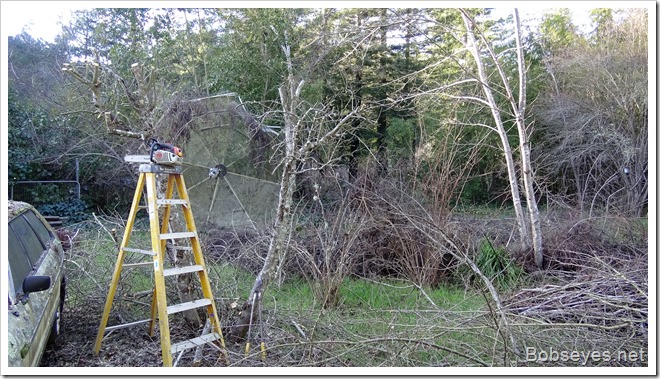 Not much gas left in the saw

I wasn’t sure how much gas was left in the saw but I had done most of the tree trimming I wanted to do with it, so I started to cut up the olive tree limb I cut off yesterday. I didn’t get far before the saw ran out of gas about the same time I did. The sun just was going behind the hills to my west too, so I put the tools away. 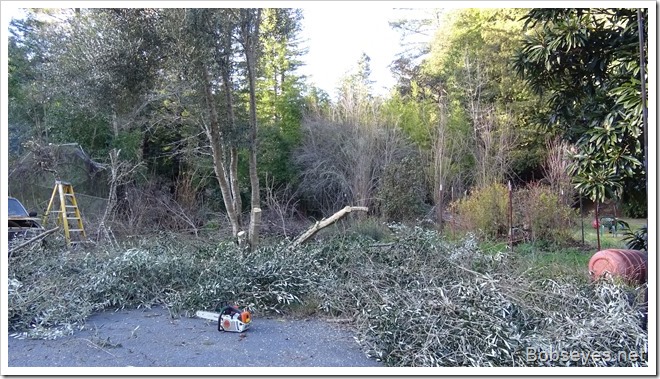 I had a hankering for a fresh carrot, so I walked over to my brother’s garden to see if I could find any left in the ground. It’s about a quarter mile or so from my house and I thought a little walk would be good, so off I went.

I crossed over this bridge to get to the garden on the other side. 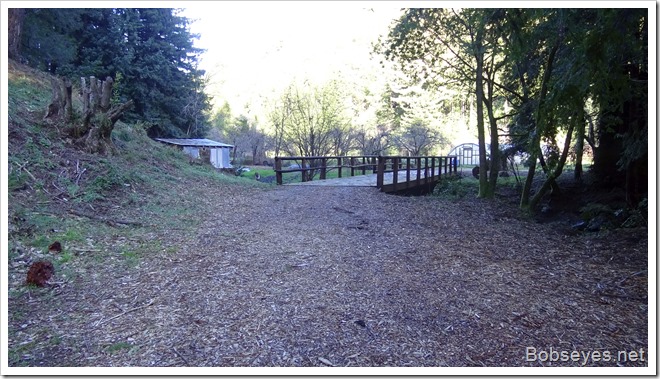 The creek has finally slowed down a bit and cleared up after the last recent rain storm. 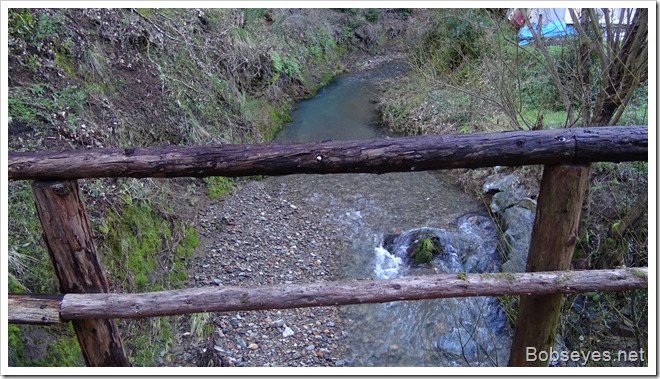 This was what the garden looks like as I entered the gate. You can see the sun is going down. 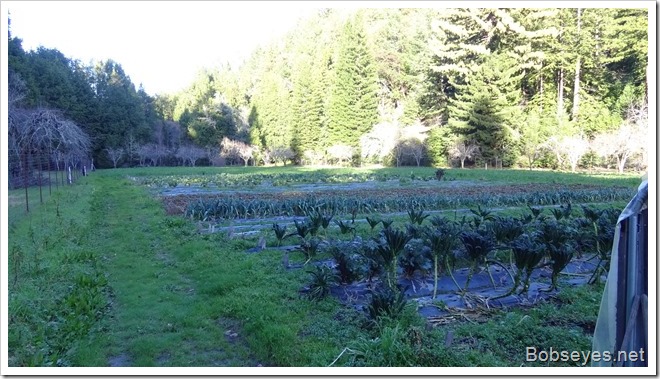 First I walked up to the end where the asparagus patch is to see if any were coming up yet, but none were. 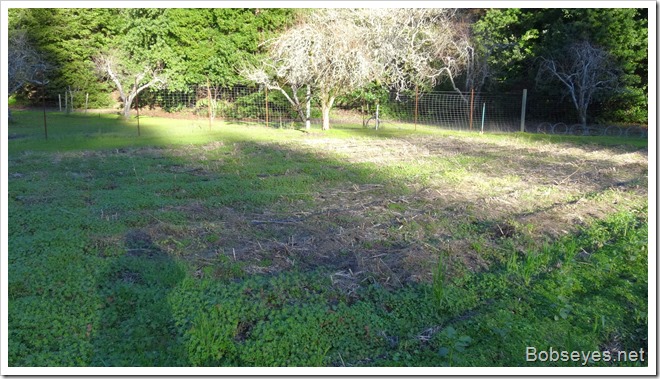 Turing around and looking back looked like this. My brother appears to have have planted a winter cover crop of bell beans, also known as garbanzo beans. 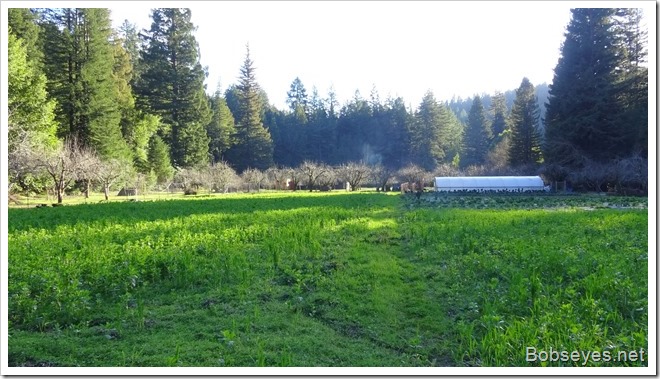 I kept looking around and finally found what was left of the carrots by the green house.  I looked hard in the weeds and found a few. I looked for a shovel to dig some up, but couldn’t find one in the area, so had to do it the hard way with my hands. I wanted to eat one, but found the water was turned off in the garden for the winter, so crossed back across the bridge where I found a sink that my neighbor uses and washed the carrots off a bit.

Being in the ground like that during the winter makes them sweet and crunchy. I ate a couple of them as I continued on home. 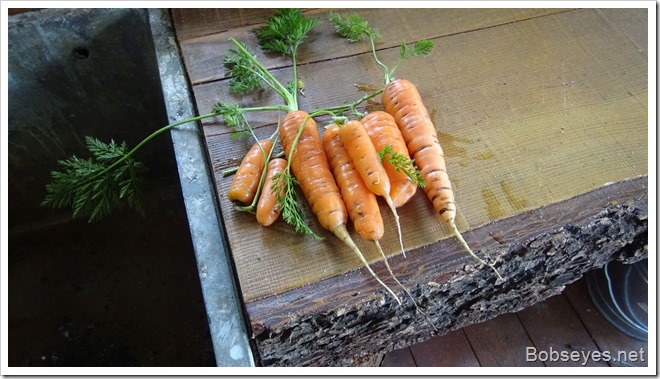 My place is on the other side of this apple orchard which I had to walk through while enjoying a carrot. I’ve stolen many apples from this orchard since I was a little kid, long, long, ago. They are great apples called Roman Beauties. or Rome’s for short. 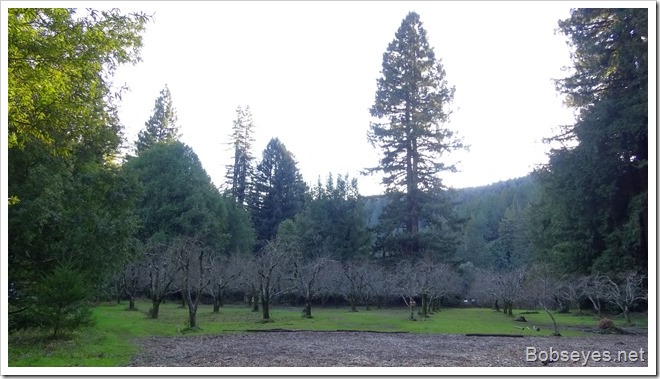 By now the sun was down and the coolness of the night was settling in so I retired to the house for a nap.